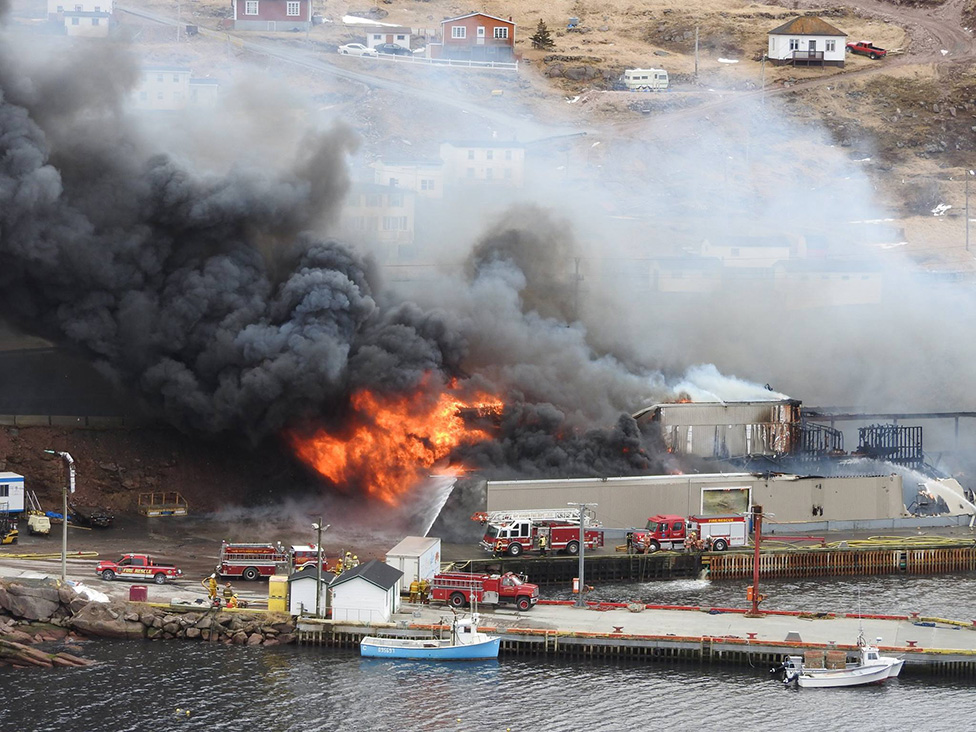 The owners of a Bay de Verde fish plant that was completely destroyed by an April 11 fire have committed to rebuild in the same community.

Quinlan Brothers’ management officials said the large multi-species plant was fully insured and announced plans are underway to replace the facility that, at peak, employs about 700 workers from all over the province, including temporary foreign workers from Thailand.

In a statement, the company said it is “diligently working to develop plans for the continuity of our shellfish business (our groundfish and pelagic operations remain unaffected). As our plans develop we will provide information first and foremost to our suppliers, workers and customers.”

The fire was first reported at 5:30 a.m. and quickly grew in intensity, fueled by high westerly winds. In a few hours, the Town of Bay de Verde ordered a state of emergency and evacuation order that saw 300 homes emptied as firefighters from around the region battled the blaze at the Quinlan Brothers plant.

The large plant, one of the largest employers in the region, was just gearing up for the start of the crab season. Last year, the Bay de Verde plant processed more than 17 million pounds of crab.

While the fire was still smouldering, the company was making arrangements with other plants in the region and on the island to take its crab in order not to delay fishermen during the very lucrative fishery.

“Plans for replacement production capacity are evolving. The company is working around the clock to put in place arrangements with other producers to add capacity, increase shifts that will ensure that the seafood landed is processed in a timely and high quality manner. At this time we are particularly focused on ensuring that the plants in the region are geared up to handle the additional supplies of raw material as much as possible. This will be most important to assist as many of the local affected workforce in gaining employment. The company’s staff at Bay de Verde will be coordinating the transition of workers to other processing facilities and they will keep in touch with the workforce to inform them of these developments as they are established. In the coming days, we will be firming up processing plans for all the supply that Quinlan Brothers normally handles,” the company said in statement.

Newfoundland and Labrador’s Premier Dwight Ball said the fire could have a massive negative impact on the economy of the region and that the government would try and step in to make whatever transitions are necessary as seamless as possible.

Bonavista-Burin-Trinity MP Judy Foote issued a statement April 11 evening suggesting some help might be on the way for fish plant workers. She spoke with federal Labour Minister Mary Ann Mihychuk, asking her to explore what options might be available to help them.