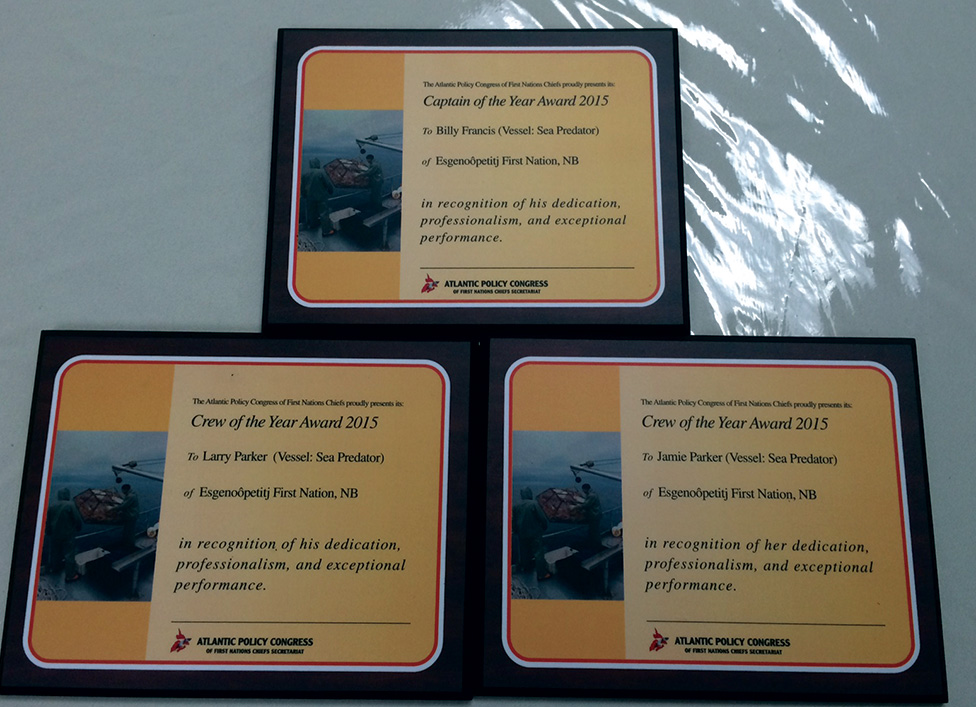 It’s a simple statement, but one each crew member of the Sea Predator repeats over and over when they talk about their work as fishermen.

Captain Billy Francis and his crew — comprised of his sister, Jamie Parker and her husband, Larry Parker — were recently honoured as Captain of the Year and Crew of the Year by the Atlantic Policy Congress of First Nation Chiefs Secretariat in the Commercial Fisheries Award category.

They were given the awards by Ken Paul, director of fisheries at a special ceremony in Moncton, New Brunswick.

The three are members of Esgenoopetitj First Nation and have been fishing together as a crew for eight years. They fish out of MacEachern’s Wharf in Tabusintac, N.B.

They were nominated for the award by someone from the band who remains unknown to them. 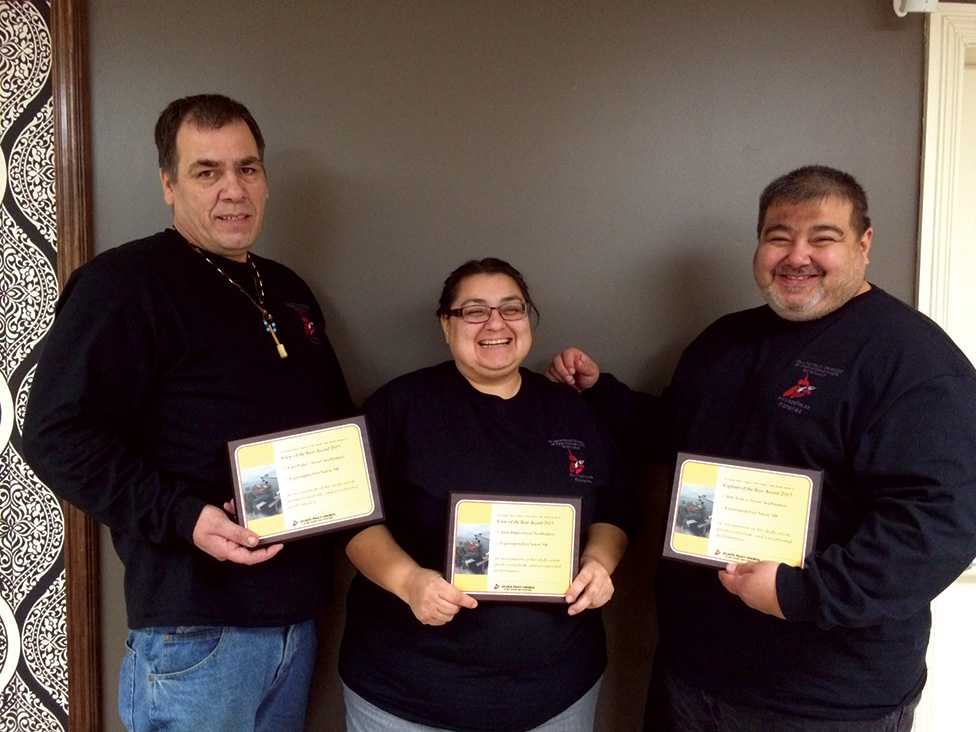 The captain and crew of the Sea Predator were honoured with awards from the Atlantic Policy Congress of First Nations Chiefs Secretariat. From left: crew members Larry Parker, Jamie Parker and Captain Billy Francis.

The award recognizes the work of Francis and his crew and the nomination detailed some of what they do, including mentoring and assisting other fishermen, taking whatever courses were available and any necessary training.

Francis has been fishing for 26 years and captaining his own rig, a lobster boat for 17 years.

Jamie joined his crew 13 years ago when her brother needed someone, he says, he could depend on.

“I had other family members that weren’t showing up,” Francis said.

Jamie has more than proven her worth. In that time, she has never missed a day of work.

“I quit for 11 days one time ‘cause I was tired of doing all the work myself. I went back when he came and asked me if he was picking me up for work the next morning.”

Francis laughed. “I was lost without her on the boat.”

Jamie, who is about five feet tall, works the trap hauler. Her brother modified it so she could work comfortably with it.

But she says the first year was hard. “I went home every day in pain. My hands were paining.”

When asked why and how she kept doing it, she said, “My loyalty.”

It is easy to see the loyalty the three have for each other.

Francis is quick to praise the husband and wife duo, saying he has the best crew around.

After Larry joined the crew eight years ago, their responsibility is to get the boat and gear ready for the spring lobster season in LFA 23.

Francis says while he keeps checking in and asking how things are going, he knows the crew is doing the job he pays them to do.

Jamie says she prefers that he stays away while they work.

“She just tells me to go home,” said Francis.

His sister says she certainly didn’t want him around when they had to turn all the escape hatches in 300 lobster traps two days before the season opened.

Each hatch had four ties, with two hatches per trap — Jamie and Larry worked 17 hours straight to get the job done.

Francis says that is what makes him proud that they were recognized for what they do.

Asked how she felt about the award, Jamie said, “It means a lot to me. I work hard.”

She admits when her brother told her about it, she thought he was joking. “I thought it was a fake.”

Larry says he is proud to be recognized for what he does by Francis and now the APCFNC Secretariat.

Jamie is the first to admit she is a competitive person and uses that in her job. She and Larry are first at the wharf, bait prepped and boat running when Francis arrives.

Jamie says over the years she has watched closely and learned from other fishermen.

“They have helped me, given me some good tips.”

In the fall of 2015, the crew were mentored as they joined the herring fishery for the first time.

Lessons learned from that experience — “Always wear a hat,” laughed Jamie. “There were herring scales everywhere.”

But the crew was pleased with their first season, loading six of the 11 nights they fished.

Soon, the crew will be getting things ready for another lobster season, doing what they love best and doing it together.

“Out there, we keep an eye on each other,” said Francis.