The 2016 edition of Fish Canada Workboat Canada took the Moncton Coliseum by storm January 22 and 23.

By all accounts, this 17th edition of the show exceeded previous editions in terms of size, sales and overall attendance.

The largest commercial marine tradeshow in the country, Fish Canada Workboat Canada 2016 welcomed 5,532 visitors, a 20 per cent increase over the last edition in 2014.

“This was easily the strongest edition of the show in the last decade — highlighting just how healthy the industry is right now. I heard many exhibitors reporting strong sales activity on the show floor and I want to thank everyone involved with the show, including our partners and sponsors, for their hard work in making it such a great achievement.”

Show attendees were eager to check out new and innovative commercial fisheries products, as well as a wide range of high quality boats — from smaller inflatables to a newly completed Northumberland style Samson 45-foot lobster boat by D & J Bait Co. Another popular draw was the Lobster Roll custom-designed motorcycle.

The Atlantic Canada Marine Industries Hall of Fame was developed by The Navigator Magazine, in partnership with Master Promotions Ltd.

The Hall pays tribute to those who have made or are making valuable contributions in any marine industry in Atlantic Canada:

The Mariner category recognizes individuals who have made a significant contribution at sea in any marine field — this could include anyone from a captain or crewmember on anything from fishing boats to cargo ships to oil tankers to Coast Guard and all points in between.

The Processor category recognizes individuals involved in the business of processing/developing marine products from fish and seafood to oil and gas, including everyone from frontline workers right up to company owners.

And finally, the Builder category recognizes those individuals who have made significant contributions to any of Atlantic Canada’s marine industries without having necessarily directly participated in them (including, but not limited to, industry advocates, organizers, service providers, marine builders, business people, media, government, etc.)

The Hall pays a lasting tribute — by way of developing a website and also a public display to be shown at marine shows in St. John’s, N.L., Yarmouth, N.S., and Moncton, N.B. — to those who have made or are making valuable contributions in any marine industry in Atlantic Canada. 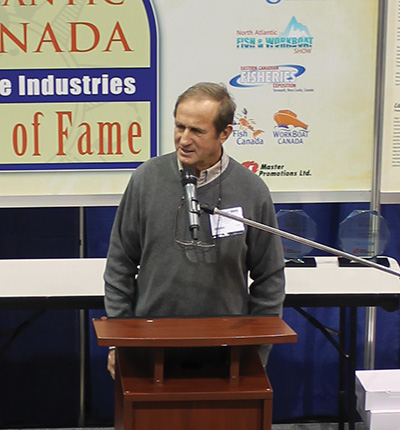 Walter Bruce, a fisherman for 56 years and captain for 54, has made an incredible impact both in his local community in Eastern Prince Edward Island and in the larger P.E.I. lobster and tuna fishing community.

Early in life, Walter went to Marine School and achieved his 350-tonne ticket, Master Home Trade and Second Mate Unlimited Home Trade. His list of contributions to the fishing community is lengthy. In addition to being a lobster fisherman for the better part of his life, Walter has been a tuna charter boat captain since 1969 and is presently involved as a captain and as a founder of the tuna hook and release, charter fishery in P.E.I. as well as co-owner of Bruce’s Tuna Charters, the longest running tuna chartering outfit in Canada. Walter’s efforts have assisted in developing P.E.I. as a destination for international tuna tourism.

He was chair of the P.E.I. Tuna Committee and was the industry representative for over 10 years. He was also the Canadian Commissioner for the International Commission for the Conservation of Atlantic Tuna (ICCAT).

Walter has shown his dedication to the Eastern P.E.I. community both in terms of community development and athletics. He served on the board of directors for the Souris Hospital in the 1970s, successfully lobbying for a new hospital. He was a minor hockey coach (1970s, 1980s), and a member of the Old Timers hockey team (1977-2008).

He was the Director of the Eastern Kings Development Corp. in the 1990s, Director of Eastern Ventures and a Tug-O-War coach in the 1990s. Walter was a Deacon of Kingsboro Baptist Church (2000s) and has also served as a volunteer fireman in South Lake. He is currently member of EKFA, PEIFA, and P.E.I. Tuna Charters Association. He is also Vice-President of Souris Credit Union and was a Director for eight years. 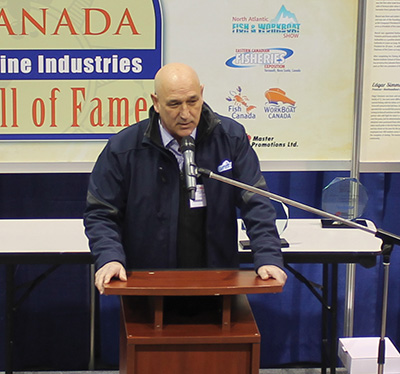 Normand or Norm as he is known was born in Cap Pele New Brunswick to Napoleon and Clara Leblanc.

Growing up he worked with his father in his processing plant on the Cocagne Bay.

He started high school at Louie J. Robichaud High School in Shediac but finished high school and graduated from Moncton High School. From high school he attended Royal Military College Saint-Jean in Saint-Jean-sur-Richelieu, Quebec. After completing one year he went to Dalhousie University in Halifax.

An avid hockey player all through his youth, he played high school hockey and played on the roster of the Royal Military College. When he got to Dalhousie University, he was told that he wasn’t eligible to play for the University and that he had to sit out a year. So he played for the Dartmouth Fuel Kids — a local junior club. There his future banker was his manager. After one year, he went to UNB to finish his BBA in 1990.

After university he joined Dow Chemical and was trained as a salesman in Sarnia, Ontario and subsequently was placed in Montreal Quebec. After a year with Dow Chemical, he returned home where he worked with his father at Seadeli. He also held the job of town manager for Cap Pele for some time.

In 1994, he started a numbered company and Captain Dan’s Bar and Grill. There he purchased lobster and crab from a couple of fisherman and sold his product in a fish market and at a farmers’ market. The restaurant was expanded with the second floor and the processing area increased. With the business growing, a processing storage facility was purchased and operated in the Industrial Park in Bouctouche.

In 1997, Norm became the owner of Dieppe Fitness Centre with two locations, one in Dieppe and the second location in Cap Pele. With his cousin Pierre, they took over a snow crab plant in Cheticamp, N.S.

In 2001, the J & K Fisheries 2001 Limited facility at Lismore was purchased to shore up supply from both the Eastern Shore of Nova Scotia and the Northumberland Strait. Also in 2001, the facility at Cap Lumiere became available. With financing in place, he became the owner and operator of the multi-use facility.

In 2008, he purchased Paul Barnett Sea Foods in Miami, Florida, importing seafood from various parts of the world and marketing in most parts of the U.S. The staff stayed and gave Captain Dan’s Inc. more customers in the Florida area and throughout the U.S.

From 2009 until present day, Norm made an effort to increase the marketing side of the business by investing in a corporate office in Dieppe N.B. The business not only marketed products processed by his own plant but actively purchased product from other processors and marketed it through Captain Dan’s Inc. In 2012, he sold his interest in Cheticamp and sold the assets in J&K Fisheries (2001) Limited to concentrate more on marketing and production. 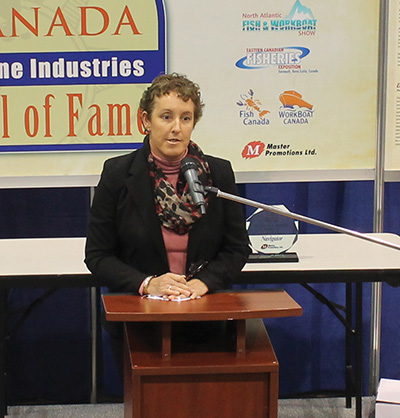 Melanie Sonnenberg accepting the award on behalf of her husband Klaus.

Born in Germany, Klaus came to Canada with his parents when he was six. He grew up in British Columbia and later earned a degree in zoology from the University of Idaho. His began his first career as a park naturalist with Parks Canada in Cape Breton. It was there that Klaus had an opportunity to observe the fishing industry closely because one of his best friends was a fisherman. Attracted to the industry at various levels, Klaus became a fisheries officer in the late 1970s and wound up on Grand Manan. He married Melanie Ells from Grand Manan in 1982 and made the island in southwest New Brunswick his home.

Klaus was instrumental in organizing Grand Manan fishermen in the early 1980s after the Department of Fisheries and Oceans cancelled Atlantic coast scallop licenses for local fishermen. One of the first projects of the fledging association was convincing the Department to establish a scallop closure around the island that still exists today.

In the mid-1980s, funding was available from the province for a marine travelift and boat yard. Despite some scepticism from local fishermen about whether it would be used, Klaus convinced the Board to proceed. The Fundy Marine Service Centre continues to be operated by the Grand Manan Fishermen’s Association and is at capacity for much of the year. It remains one of the organization’s biggest success stories.

With the formation of a herring weir sector within the GMFA, Klaus led the organization to seek funding to build net mending and storage buildings, as well as purchase trucks with maulers for members’ use. He also organized a program to sell surplus large herring from the weirs to Russian factory ships from 1988-1993.

Over the years, Klaus represented the GMFA at industry meetings ranging from species specific (lobster, scallop, herring, and groundfish) to Transport Canada, to bi-lateral meetings with the United States regarding management of the disputed waters off Grand Manan (The Grey Zone).

He was a board member of the Eastern Fishermen’s Federation from 1982-2014 and for the better part of two decades served as treasurer. On the island, Klaus could frequently be found having a conversation about the fishery in local coffee shops or at the grocery store. While accomplishments in the larger fishing community are noteworthy and important, it is often in the smaller, local moments that strong organizations are built.

Until his unexpected death in 2014, Klaus continued to represent the organization at industry meetings and worked locally with island fishermen.

Next up will be the North Atlantic Fish and Workboat Show, taking place November 18-19, 2016 at Mile One Centre in St. John’s, Newfoundland. For more information on that event, visit www.NAFISH.ca.

Newfoundland and Labrador Needs to Get Back to Basics

No Replies to "Fish Canada Workboat Canada Success: Best Edition in Over a Decade for Canada’s Largest Commercial Marine Event"