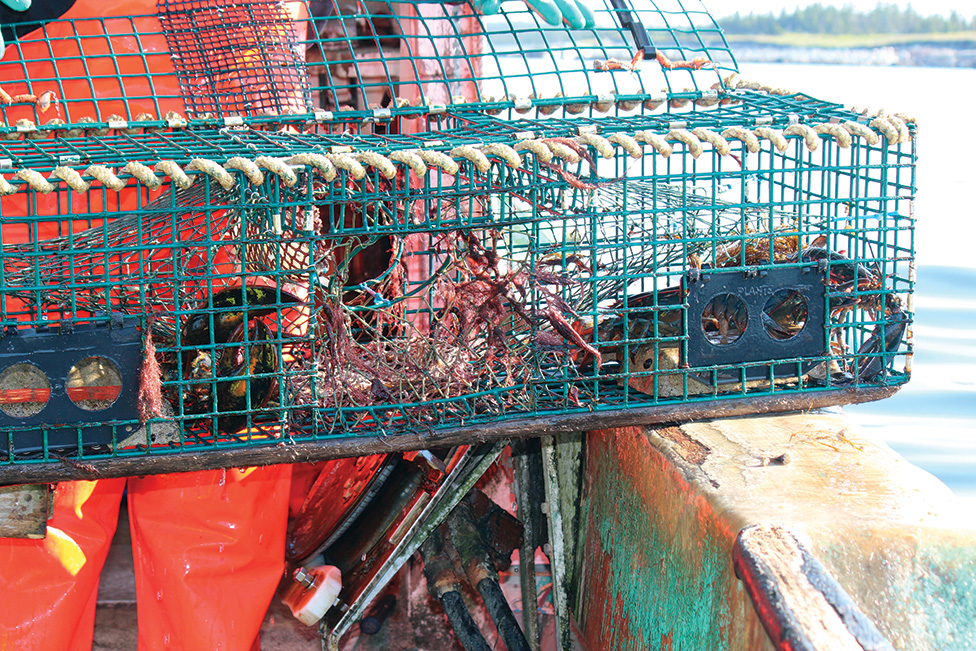 A five-storey high, two-megawatt turbine made its way from Pictou, N.S. around the coast to the Fundy Ocean Research Centre for Energy (FORCE) site in the Bay of Fundy outside Parrsboro last month.

This will be the first of two such turbines that eventually will be placed in the Bay of Fundy by Cape Sharp Tidal. This is just one project of five Fundy tidal power tests which the province feels could very well place Nova Scotia in the forefront of using electricity produced the green way.

The two turbines, once connected to the power grid, could provide 1,000 homes with electricity.

The force of tides to generate electricity has been of interest to engineers for years. In fact, tidal mills — which trap incoming water in large ponds and as the water is let out turn water wheels — was used by the Romans centuries ago. 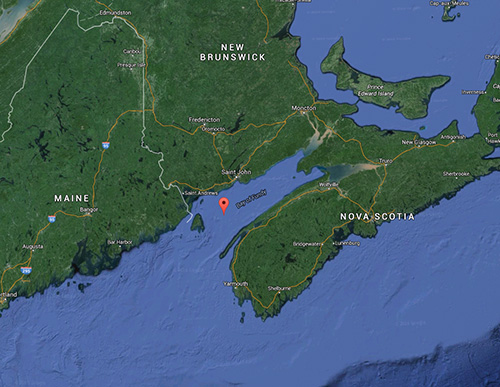 The use of tides to produce electrical power began in the 19th century, but really picked up steam in 1966 with the opening of the Rance Tidal Power Station in France.

As with any introduction of new technology in a fishing environment (the cage farming of Atlantic salmon is a prime example) there are always concerns.

The Bay of Fundy is part of the Gulf of Maine, one of the most prolific and unique marine ecosystems on the planet. Extensive flushing caused by various currents enables spawning to take place year round in a place like Georges Bank and the area is rich with marine life.

And as with many other agendas pushed by governments, fishermen in the Bay feel they haven’t been consulted and that things are proceeding without their input and concerns being dealt with.

Considering the size of the Bay of Fundy, two turbines shouldn’t disrupt too much in terms of shore erosion or effects on marine life. But if these two turbines are successful, many more are bound to follow and then it becomes a different ballgame.

What fishermen have always wanted is to be part of the process from the get-go and they want representation on boards which will deal with issues down the line. And these representatives have to come from fishing groups themselves, not hand-picked by government and industry.

The lack of input has been to such an extent that the 150-member strong Bay of Fundy Inshore Fishermen’s Association has begun circulating a petition asking the provincial government to stop tidal power activity in the Bay until they have been consulted fully. The group also feels more research needs to be done before the go-ahead is approved.

The issue is what effect the turbines will have on the fishing grounds and their livelihoods. Association President Chris Hudson said in a media statement that FORCE had contacted him and presented him with background information, which he said was a start. 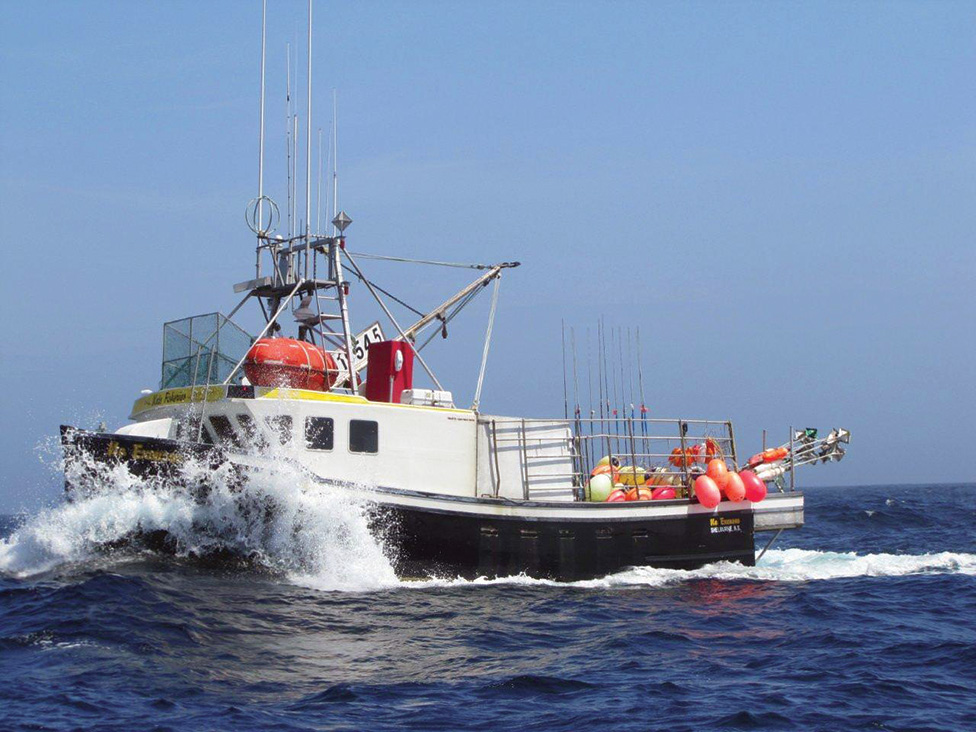 The area has a viable lobster fishery. There is also a herring fishery at certain times of the year off Isle Haute and striped bass enter various rivers via the Minas Basin.

One of the issues is loss of fishing areas due to the company implementation of safety zones.

There are issues with blades striking fish as they swim through, although there is technology out there to turn the turbines off when marine animals approach.

Acoustics are another problem as sound travels much further in water and noise associated with the turbines could alter traditional passage way of migrating fish species. Electromagnetic fields from power cables which won’t be buried is another problem the fishermen would like addressed.

There are very few places on earth where the tides can accommodate electricity-producing turbines and the Bay of Fundy is one of them. These tides are much more predictable than wind and solar energy devices and there’s no doubt that Nova Scotia would like to develop this resource to the fullest. 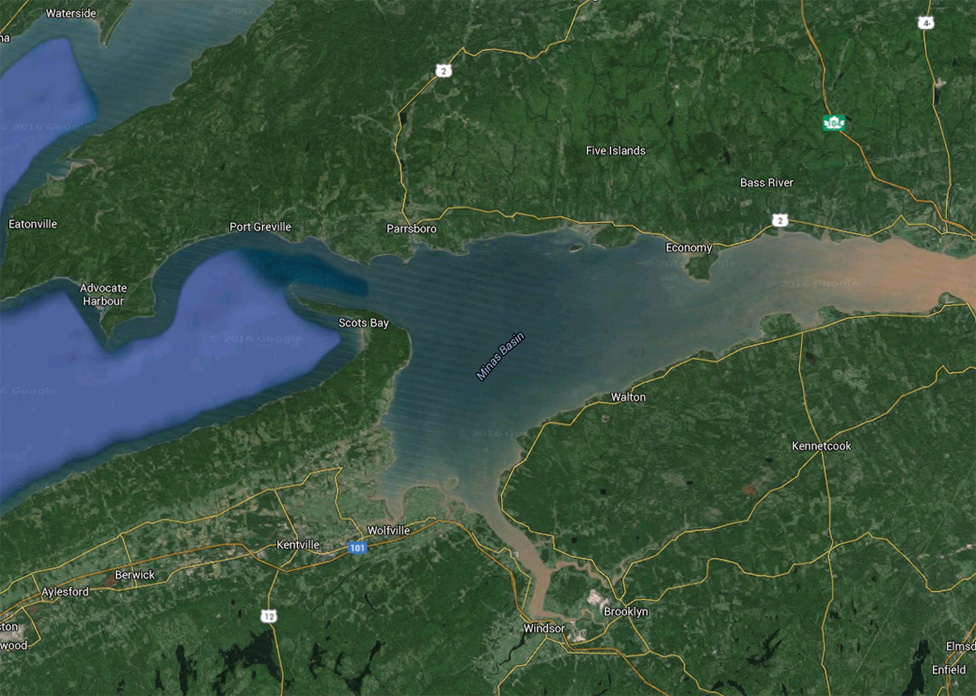 Turbines have yet to be set at the mouth of the Minas Basin, an arm on the Nova Scotia side of the Bay of Fundy, but alarms are already ringing loud and clear.

Deployment, due to occur in early June, has been delayed by the companies involved until environmental concerns are dealt with.

The Bay of Fundy Inshore Fishermen’s Association is leading the fight against the massive turbines and announced in late May that it was seeking a meeting with the then federal Fisheries Minister Hunter Tootoo.

Tootoo has since relinquished the portfolio to attend to an addiction-related problem and is being replaced by Dominique LeBlanc, the son of the late Romeo LeBlanc, who was Fisheries and Oceans minister under Prime Minister Pierre Elliott-Trudeau, father of the present Prime Minister.

The association represents more than 150 Bay of Fundy fishermen from Digby to the Minas Basin and they are concerned the turbines could jeopardize their fishery.

Five turbines are due for deployment between Cape Split and the Parrsboro Shore in the very near future with a number of companies — regional and international — in play.

Fishermen feel they haven’t been consulted and that further testing needs to be done to assess the environmental impact on the local fishery.

Their concerns are backed by DFO and the Ecology Action Centre.

Following a meeting in Digby on May 22, attended by 60 of the top fishermen in the area, it was decided to raise money to fight this initiative because most feel the project is moving too rapidly.

A recent report by the Offshore Energy Research Association (OERA), authored by Dr. Graham Daborn of Fundy Environmental & Educational Consultants, concluded that the remaining environmental questions can be addressed once turbines are on-line.

Since 2007, 50 studies on the bay’s marine biology and ecosystem have been conducted with more to come, however a number of gaps have been discovered within the reports.

These gaps need to be addressed, according to the Ecology Action Centre.

Adding to the mix is the fact that a provincial environmental assessment got the ok at a smaller scale initially intended as a test site but has now turned into a commercial operation destined to last for years.

In a newspaper article, Dr. Trevor Avery, an adjunct professor of biology at Acadia, said with the world’s highest tides, conditions in the Bay of Fundy can’t be duplicated elsewhere as well as its unique ecosystem which he feels isn’t being fully considered.

Dr. Avery agrees with the DFO study that shows statistical flaws with the proposed FORCE monitoring plan. He feels the evidence does not support the deployment of the tidal turbines yet.

Canada’s Fishery on the World Stage

No Replies to "Fishermen Feel Left Out of Fundy Tidal Process"