Like many young men in Newfoundland and Labrador, Everett Wade Spurrell of Carbonear grew up working on his father’s fishing enterprise.

He knew that his ideal career would involve working outdoors, and he was inspired by his two grandfathers’ work in transportation — one on the railway and the other building roads and bridges.

Then in the 1970s, a recruiter from the College of Fisheries showed up at James Moore Central High School, talking about opportunities for those wanting to work on the water. By the end of the presentation, they had hooked young Wade and so began his career upon the bright blue sea. 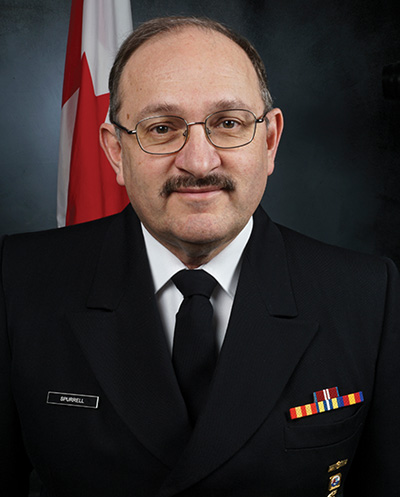 “I started off with the old ships branch of DFO in the late 1970s and jobbed around,” says Wade, “and like most young mariners, I moved around a bit, working in the private sector and on offshore supply boats, container ships, and scientific research vessels.”

That young man, who loved the outdoors, has seen spectacular days when the ocean was like a mirror as well as days when windows were punched out of a ship’s bridge by a rogue wave. He has sailed from the Arctic to the Caribbean, and back.

He has conducted armed boardings to arrest vessels fishing illegally in Canadian waters and towed everything from a punt to a drill rig to an iceberg. And he is gratified to say that most of the many Search and Rescue (SAR) operations he conducted had happy endings.

When Wade meets with new members of the CCG, he likes to use this quote, “Experience is what you get when you didn’t get what you wanted.” It’s one that resonates with him from his time at sea and life in general. “Some of the most rewarding and challenging jobs were ones I did not want.”

In a career full of rewarding moments, Wade says that one notable occasion was getting to meet and shake hands with Prince Charles, but his proudest moments are of a different sort.

“My proudest moments have come from times when my crew or team have done extraordinary things,” he says. “Knowing you helped them do that is very inspirational.”

On a personal note, he adds, “finishing the local sprint triathlon was also pretty cool.”

Wade explains that the Assistant Commissioner position “is my third job in the last four years. For two years before that, I was the Director General of Operations for the Canadian Coast Guard base in Ottawa. For four years before that, I was the Assistant Commissioner for the Central and Arctic Region, which at that point was the Great Lakes and the Arctic.”

As Assistant Commissioner, Wade oversees Coast Guard operations in the Atlantic Canada, which includes 1,800 staff and 1,500 volunteer members of the Coast Guard Auxiliary. He modestly describes his job as, “an eclectic series of activities.”

On a day-to-day basis, he could be involved in anything from fleet operations to ice breaking or an environmental response to labour relations. An area that Wade spends more of his time on lately is recruiting.

“The Coast Guard had a stable workforce for a long time but as baby boomers like myself head into retirement, there are more and more opportunities for young people interested in a career with the Coast Guard. There is room as well for people who are mid-career in other fields looking for new challenges. The breadth of work that Coast Guard does is huge and offers opportunities in many areas, from going to sea to engineering, radio communications to equipment maintenance.”

In fact, Wade would like more Canadians to know the extent of the services that the Canadian Coast Guard offers.

“Very few people really know our services and often people expect we are a duplicate of the United States Coast Guard with the same powers and capabilities. They expect our ships to be armed (only a few are and for specific programs) and they expect we certify mariners and test or approve things like life jackets (that is Transport Canada). They also only think of the fleet, and not the shore-based activities that support the safety of mariners and protect the marine environment.”

When that young man was sitting and listening to the recruiting pitch given by the College of the Fisheries, would he ever have dreamed that he would one day head the Coast Guard in Atlantic Canada? “I never saw it as a possibility. Command at sea was my goal, but I knew swallowing the anchor (a term used for coming ashore to work) would be an option later in my life.”

Wade has come a long way from that small town in Conception Bay but all the while, he has lived a life connected to the sea.

“I am like everybody else in this organization and I think this work is very important to mariners and it’s very important to Canadians. It’s a difficult job. It’s a challenging job. And if you’re prepared for that, it’s a very rewarding career.”

Concerns Continue to Be Raised Over N.S. Oil Industry Expansion

No Replies to "From Conception Bay to the Coast Guard: A Life on the Bright Blue Sea"