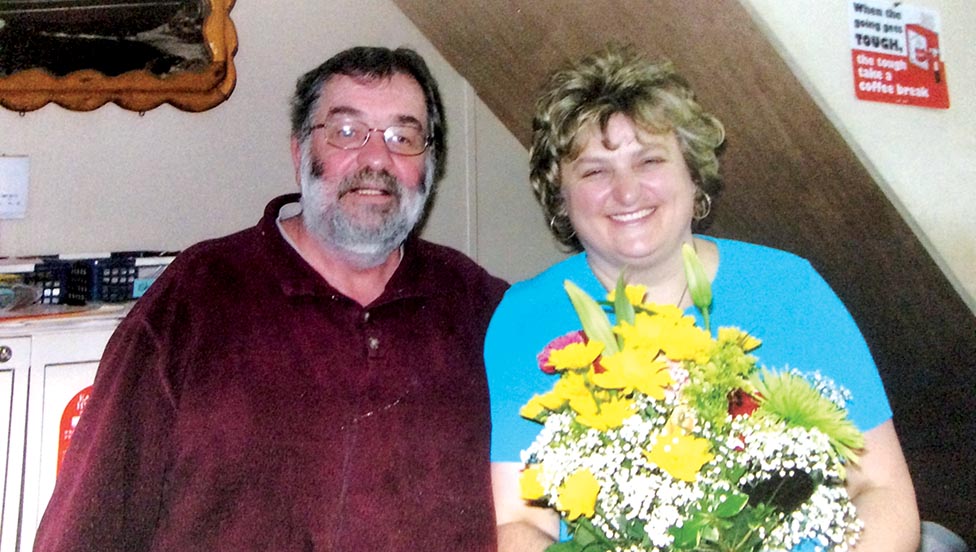 Above: Bob Davis with his good friend and colleague Michele Babstock.

For 40 years, Robert (Bob) Davis has been synonymous with the Glovertown Shipyard in northeastern Newfoundland, both as an owner and in his retirement years, project advisor.

Davis died unexpectedly on April 22 after a brief illness, joining his wife Beverly who had passed away just the month before. The couple had been married for 46 years. Davis is fondly remembered as a mentor, a neighbour and a great friend by those who knew him.

“He was a wonderful boss that taught me well over the last 32 years,” said Michele Babstock. “He hired me when I was only 22, but Bob always had the confidence in me that I would do my job to the best of my ability. I’ve gained a lot of knowledge in the shipbuilding industry because of this great man. He always gave me good advice and I owe it to him for the reason I’m still working at the shipyard today.”

Babstock said one thing she will always remember is “one of Bob’s famous lines to the fishermen when they wanted to make changes to the vessel construction. He would always say ‘It will cost you.’ I am certainly going to miss his visits and phone calls here at the shipyard. He was definitely a true professional and was an integral part of making the shipyard what it is today.  Bob was not only a colleague and a mentor — he was also a great friend.”

Graduating from Memorial University in 1975 with a Bachelor’s Degree in civil engineering, Davis purchased the Glovertown Shipyard in January, 1980 and was owner/operator until 2003. As an engineer and experienced shipyard owner and manager, Davis built up a positive reputation in the shipbuilding industry within Newfoundland and Labrador.

For Glovertown Shipyard owner Leon Dowden, who took over the shipyard after his father Ford passed away in 2011, Davis was there to provide project guidance and advice for the past 10 years.

“When dad died suddenly, he (Davis) stepped in and gave me a hand,” said Dowden in an interview.  “He didn’t want to see the business fail. He was a great guy for me. He kind of stepped away a bit the last few years. He said you’re good on your own now. You don’t need my help anymore. He was more than willing to help but he said you don’t ask me questions anymore so I’m going to leave you alone.”

Dowden said the last major project Davis “gave me a big hand with” was a contract to build a 250-foot barge for ExxonMobil for the Hebron project.

Davis had a bit of a serious side, but liked to joke around at the same time, said Dowden. “He joked around but when it was time to be serious, he was,” adding there are a few tales he could tell that are “more like story jokes.”

When Davis wasn’t at the shipyard, he would spend weeks at a time at his cabin in the northwest arm, summer and winter, said Dowdin. Davis also really liked woodworking.

“He built a lot of his own furniture at the cabin, tables, chairs, beds… he loved woodworking.”

“He was a pretty smart guy,” said Humby in an interview. “He knew what he was doing with the figures. We made a good combination. He was in the office and I was in the yard” as master boatbuilder.

Humby said one of most memorable projects the shipyard was involved in was in 1989 when Nova Scotia boatbuilder Gerard Aylward set up shop building 55-foot fibreglass hulls in an empty U.S. Air Force hanger at the Stephenville airport. “It was the only building big enough,” said Humby.

“We got a contract to build three of them, to finish them. He built the hulls,” but with the airport nowhere near the water, the boats had to be trucked to the shipyard.

“We had to get permission to cross the runway with these boats,” laughed Humby. “We succeeded, put them in the water and had a great time doing it. It was a different experience, one of my biggest highlights at the shipyard.”

Humby said he had the opportunity to speak with Davis shortly before he passed away and they talked about the old days and all the good times they had. “It was a good chat.”

The influence Davis had on the Atlantic Canadian shipbuilding industry was far-reaching and he was well respected by his colleagues and peers.

Trevor Decker, Director with the TriNav Group of Companies, smiles when he speaks of Davis.

“I had just graduated from the Marine Institute’s Naval Architecture program and Bob hired me and gave me my first professional opportunity in the industry.”

Reflecting back, Decker said he learned a lot from Davis. “He not only taught me about the technical aspects of shipbuilding, but I observed his professionalism and the way he conducted business. He was certainly a stalwart in the Newfoundland and Labrador marine industry and he surely will be missed.”