Restoring an Ecosystem From the Bottom Up

It was more than 400 years ago that Placentia Bay’s fishing industry started.

Back then, Placentia’s large, rocky beach meant that fish could be salted and dried right on the rocks rather than on a constructed wooden fishing stage, saving time and effort.

Placentia’s economy was based on the cod fishery and cod trade. In fact, the fisheries of Placentia played a large role in securing Newfoundland as the world’s largest exporter of salt codfish.

Jump ahead a few centuries and the economy and the environment look very different, even though the ocean is still an important part of Placentia’s identity and lifestyle.

Like everything else, the ocean has also changed —crab and fish are not as plentiful as they used to be. But there’s something happening below the surface of the ocean in Placentia Bay that may just change the entire ecosystem for the better. At least, that’s what scientists are hoping.

Scientists have created artificial reefs and are restoring eelgrass in the bay, with a vision of restoring an ecosystem that’s been virtually lost. Fisheries and Oceans Canada (DFO) is partnering with the Marine Institute on the project. It’s one of three projects in Newfoundland and Labrador under the Coastal Restoration Fund. 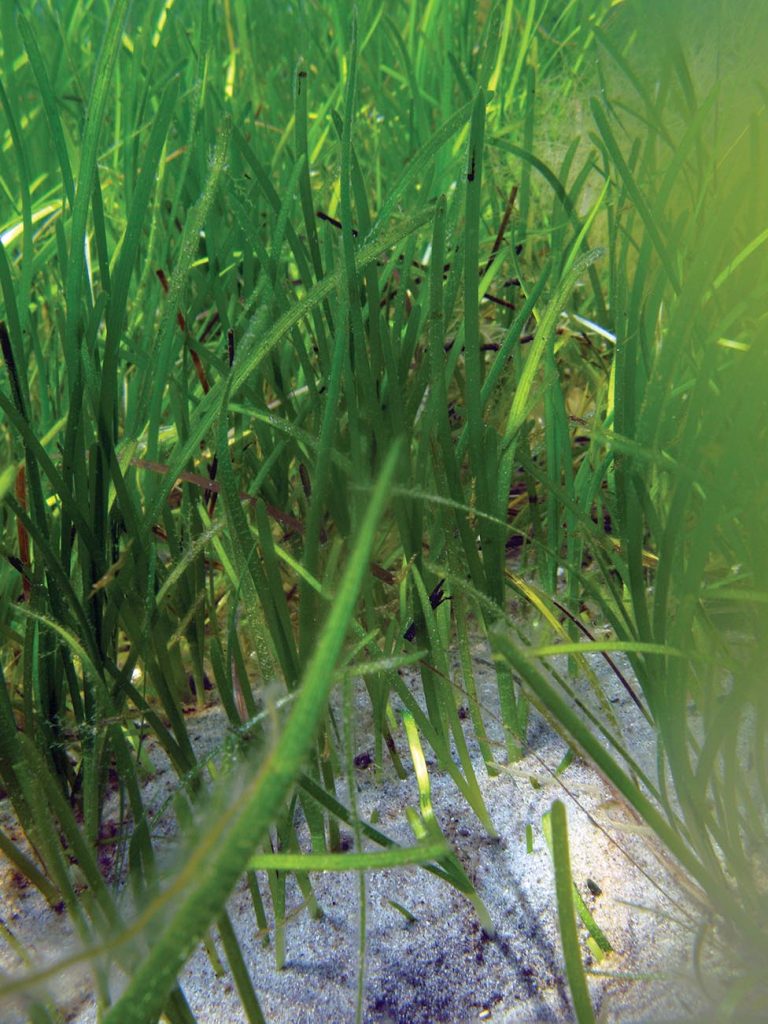 As part of that plan, the Marine Institute is receiving $4.7 million from the Coastal Restoration Fund to help bring back a healthy coastal ecosystem in Placentia Bay.

Over the course of the five-year project, it will work with local fish harvesters, the Salmonid Council of Newfoundland and Labrador, ACAP Humber Arm, Miawpukek First Nation, the Memorial University scuba-diving team and others towards the common goal of restoring and enhancing marine habitat.

Richard Van Ingen is the Coastal Restoration Fund regional liaison and a senior biologist with DFO.

“One of the reasons DFO has identified Placentia Bay as a priority area in Canada is because of the importance of the fishery and the amount of shipping happening there. The fund is meant to protect important marine areas and Placentia Bay is definitely one of those,” stated Van Ingen.

In fact, the Placentia Bay port facilities handle some of the largest volumes of oil in Canadian waters and has grown in both oil and gas and marine shipping.

Dr. Arnault Le Bris is a research scientist with the Marine Institute’s Centre for Fisheries Ecosystems Research (CFER) and the lead scientist on the Placentia Bay project.

Le Bris grew up surrounded by the sea in Brittany, France. He moved to Newfoundland in January 2009. For him, it’s the connectivity of all the aspects of the Placentia Bay project that really get him excited. He sees the connections of the river, to the eelgrass, to the artificial reef. The goal is to restore those connections by building habitats to help marine life survive.

“For example, with codfish, research has shown that during the time when they’re young, from three to 10 months old, they like to hang out in the eelgrass bed because it’s a good refuge against predators. But when they get bigger, at one or two years old, they don’t spend as much time in the eelgrass. They go a bit deeper and we hope that the artificial reef is where they will go. And when they get bigger, that’s when they start to do a full migration cycle. So, we are trying to get the connectivity between the habitat for age  zero (less than one year old) and the habitat for one and two years old.”

Eelgrass beds have declined significantly in Placentia Bay over the past few years. Although there may be other factors, scientists do know that the decline coincides with the presence of green crab in the area. The absence of eelgrass has, in turn, led to a decline in fish populations. This project aims to tackle all three of these problems.

Eelgrass is found to be 17,000 times better at ensuring the survival of young cod than other habitat. According to a study in Science Direct, eelgrass expansion has meant an increase in juvenile Atlantic cod density in Newfoundland and will improve the long-term productivity of the cod fishery by enhancing its breeding stock.

“You have to think of eelgrass like a rainforest. Through photosynthesis, eelgrass takes carbon dioxide (CO2) from the water and releases oxygen so it limits the amount of carbon dioxide in the water. This is important because it will reduce the exchange of carbon dioxide between the ocean and the atmosphere, mitigating the impact of climate change,” explains Le Bris.

Excess carbon dioxide in the water can also lead to a more acidic ocean, breaking the shells of calcifying organisms such as plankton, molluscs and crustaceans.

The restoration of eelgrass could have another benefit as well.

“Herring eggs go to the bottom and stick, like capelin eggs on the beach, but it tends to stick on seaweed or kelp. In North Harbour, we have anecdotal evidence from people that there were herring eggs on eelgrass in the past.”

Le Bris doesn’t have the scientific proof behind that but they’ll be monitoring to see if that’s the case. Talking to people in the communities to gain local knowledge is an important learning tool of the project.

“Think about it like a forest. If you’re out in the forest, you can hide, you can forage, and you can find your food. If suddenly, you raze the forest, a forest fire comes through and wipes it out, you’re standing there all alone, you’re very visible,” explains Van Ingen.

“So, a predator can see you or if you’re a predator, now you can’t catch what you need because your prey sees you. That’s a simple way to look at it but that’s how it works.”

When asked why people should care about it, Van Ingen’s response is “Do you like marine fish? If you do, we really have to start protecting our eelgrass beds, our kelp beds, etc…”

The scientists will be using a large drone as well as divers to map and monitor the eelgrass beds this fall. With the help of a PhD student, they’ll combine images from drones, satellite and scuba reports to get the most precise estimate of eelgrass cover.

In the future, Le Bris also hopes to create a citizen’s science program to continue monitoring eelgrass. The Marine Institute will be working with schools in the area to educate students on ecosystems and ‘training,’ hoping they can become community monitors.

To give eelgrass the best chance at survival, scientists are also tackling the green crab population, working with the Fish Food and Allied Workers Union (FFAW) to control the population of green crab. 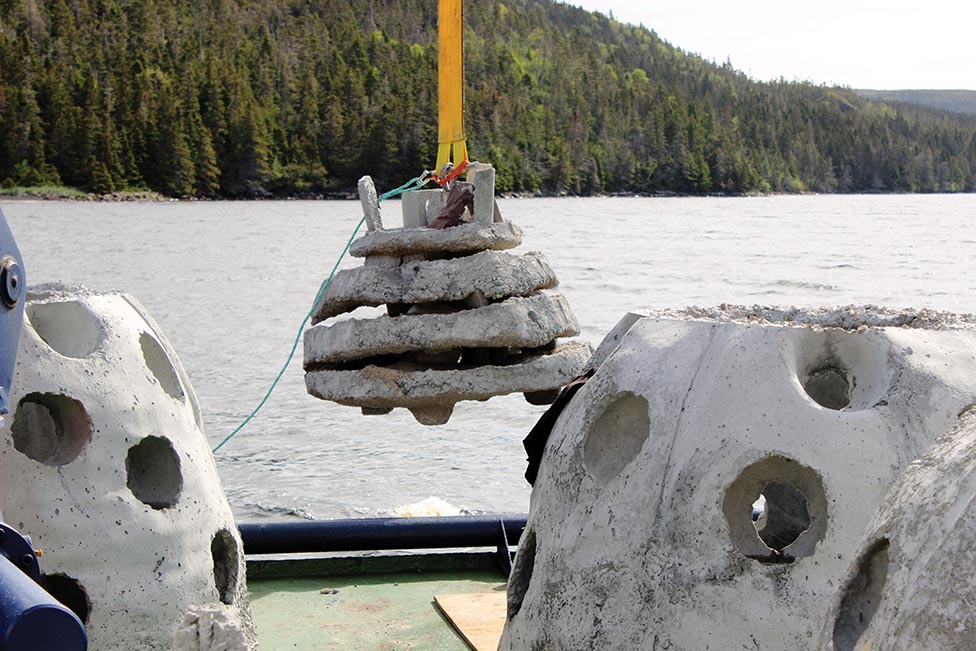 The naturally aggressive and territorial crab feeds on shellfish and other crustaceans, damaging eelgrass habitat when digging for prey, making burrows or cutting the roots of the eelgrass. To solve this issue, there’s a trapping exercise taking place in conjunction with the eelgrass restoration and reef installation. It started last year in partnership with local fish harvesters and will continue for the next three years.

Local fish harvesters are trapping green crab, helping to collect data on size, sex and reproductive status. The green crabs are then placed into large freezers for 48 hours before they are crushed to make compost.

Caley Ryan is a masters degree student from the Qalipu First Nation, who is also part of the team working in Placentia Bay.

Caley is analysing catch data from the green crab fishery along with environmental data to evaluate the success of the fishery in reducing the size of the green crab population.

So far, five artificial reefs were installed in March in North Harbour. In June, five more went into the water in North Harbour as well as ten in Placentia Sound. Another 10 have been built to put in Northeast Arm this fall.

Van Ingen agrees the reefs could have multiple benefits.

“I find in a lot of aquatic systems, wherever you put vertical structure, fish congregate. They like that because it’s a visual barrier, provides cover from predators but also provides cover for the predators so they can get their prey. So, it becomes an integral part of the system.”

There are two types of artificial reefs: one that looks like a bee hive with holes for cod and other fish to swim through and a smaller reef, about half the weight of the large ones, which look like a layer cake with narrow ledges where lobsters and other shellfish can hide from predators. Given that such artificial reefs had never been done in Newfoundland and Labrador, the team worked with a non-profit company, Reef Ball Foundation, to develop the molds.

The reefs are between four and five feet high and six feet wide. They weigh 5,000-6,000 pounds for the larger one and 2,000-3,000 pounds for the smaller ones. So, it’s no easy feat to get these things in the water. It takes a crew of five people to deploy a reef.

The team will deploy 50 reefs in total or 10 per site and there may be more in the future once they’ve had a chance to monitor the impact.

Le Bris says the partners for the project vary from year to year because so do the objectives. Currently, the team is also working with the Salmon Association of Eastern Newfoundland to help identify the potential barriers of salmon migration. It is conducting an inventory and prioritization process of migratory barriers for Atlantic salmon, which live in fresh water, spawn, come down to the ocean to feed and move back for spawning in the fresh water.

Armed with this information, the group is hoping the eelgrass beds and the reefs may be important in the salmon life cycle as well.

When breaking down the objectives, Le Bris says the first year meant getting ready with some field and river work; years two and three are dedicated to planting eelgrass at the same time as deploying reefs; and years four and five are when monitoring will take place.

“We’ll go three or four times a year and see if there’s any fish, what there is inside and then dive in a very similar site, without the reef, to see if the fish are only in the reef and not somewhere else. It’s like a controlled experiment,” says Le Bris. They’ll also use an underwater camera because divers and the bubbles they create, as well as the light, can sometimes scare the fish.

Van Ingen is hoping to see an increase in recreational, commercial and Indigenous fishery production within Placentia Bay. He admits that’s very ambitious, but he’s hopeful.

“It’s a big area, but if this works, if we learn something then maybe over the next 15 to 20 years, we can recover eelgrass beds through the bay and into other areas as well.”

“Eelgrass is the type of thing you don’t like to wade in if you’re going swimming, but it’s great for fish. When it’s gone, it has an impact on the whole system. If we can get these eelgrass beds restored and find a viable way to sustain them, that’s what gets me excited,” he adds.

“The reefs will stay but reefs alone don’t do you much good. You may as well throw a rock in the water. It’s how these are going to interact with each other that I think is going to be the big benefit.”

No Replies to "Going Underwater in Placentia Bay"