The Nellie C is now plying the waters of Newfoundland and Labrador.

The Nellie C is the first vessel built by HGOE or its predecessor company, Dawe’s Welding, since 2005.

The 39-footer, designed by TriNav Marine Design, incorporates an innovative new design and can be rigged for crab, groundfish and lobster. 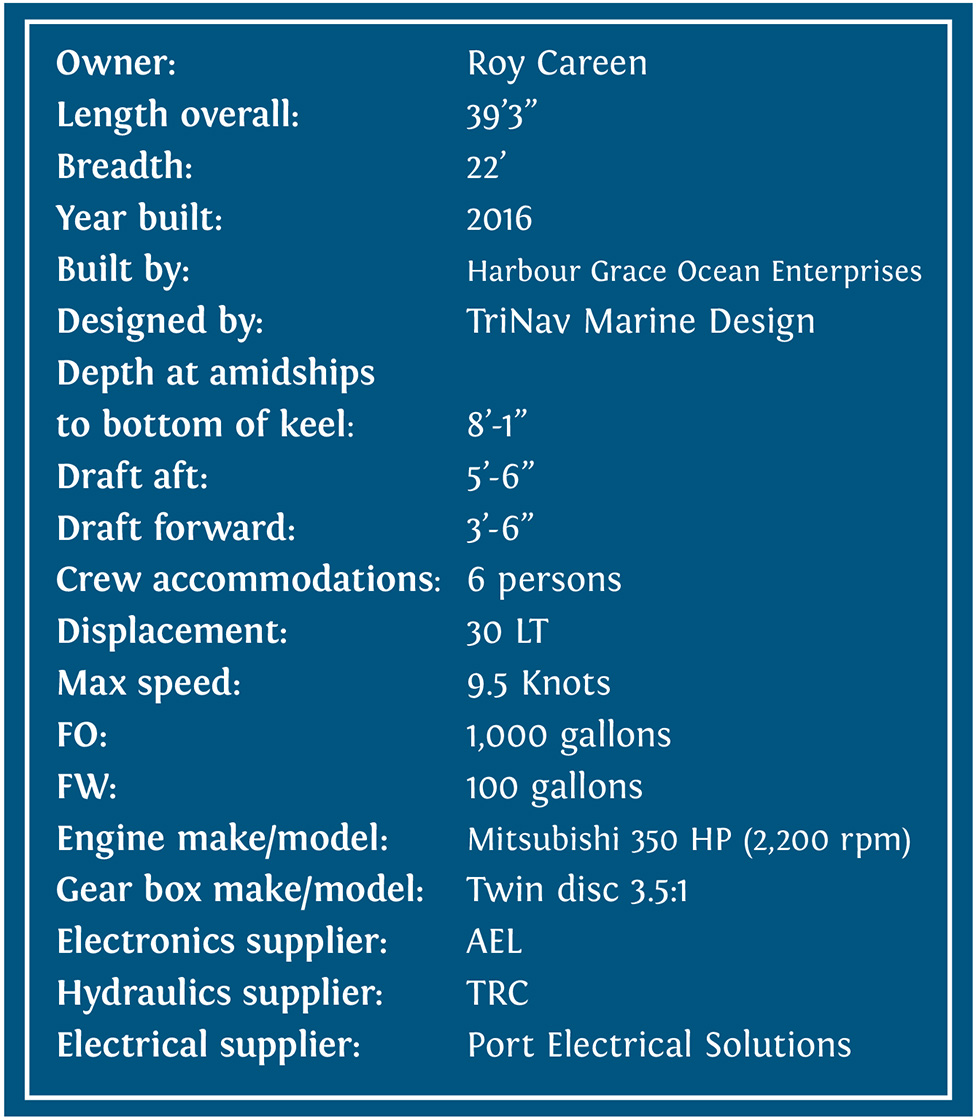 The hull is built of hand-laid fibreglass with transverse and longitudinal framing throughout. The vessel shape and design is in keeping with the traditional Nova Scotia lobster vessel style.

It has accommodations forward in the foc’sle for six people. The engine room, with a separate access from the main deck, is aft of the foc’sle with the wheelhouse above on the main deck. The wheelhouse is fitted with a state-of-the-art control station to starboard and a full and spacious galley to port.

The large 15-foot long fish hold is aft of the engine room and is fitted with nine, five-foot fish pounds for easy boxing of catch. The large main deck aft is perfect for a variety of fishing operations and has considerable storage space for fishing gear.

The Nellie C, constructed for Point Lance fishing enterprise owner Roy Careen, took five months to construct at HGOE’s substantial Harbour Grace yard. However, the yard’s operations manager, Wayne Reid, said based on what was learned on this project, the company could now complete similar boats in four months.

“One notable modern piece of technology that greatly aided their work was the use of computer numeral control to complete precise cuts of the frames for the boat. It gives you more precision to the boat. It is a huge advantage. Very easily on a small boat, it cut two months off the project,” Reid explained to the media.

The launching of the Nellie C marked a resurgence in new builds for the Newfoundland-based company.

HGOE currently has an 80-footer under construction — scheduled for completion next spring.

Reid explained that the same design technology used in the 39-footer will save approximately three-to-four months of work on the large 80-footer. He added that it will probably be the largest fishing vessel built on the Avalon Peninsula to date.

Reid said he is quite proud of the new vessel.

The boat building industry in this province “seems to be rejuvenated and back in action, so we’ve been focusing on this very hard for the past three-to-four years,” he noted.

HGOE General Manager Paul Lannon told The Broadcast that he and his group took over the business in 2013 and right away saw opportunities to get into boat building.

“There’s a growing demand for new fishing vessels of various sizes because of changes to regulations in the industry and people fishing different species, so yards are very busy throughout the Maritimes and Atlantic Canada,” Lannon said.

The business currently employs 80 people with 20 to 30 working on boat construction and expects to get busier.

“We have gotten calls from the Maritimes because there is a bit of a waiting list over there,” Lannon added.