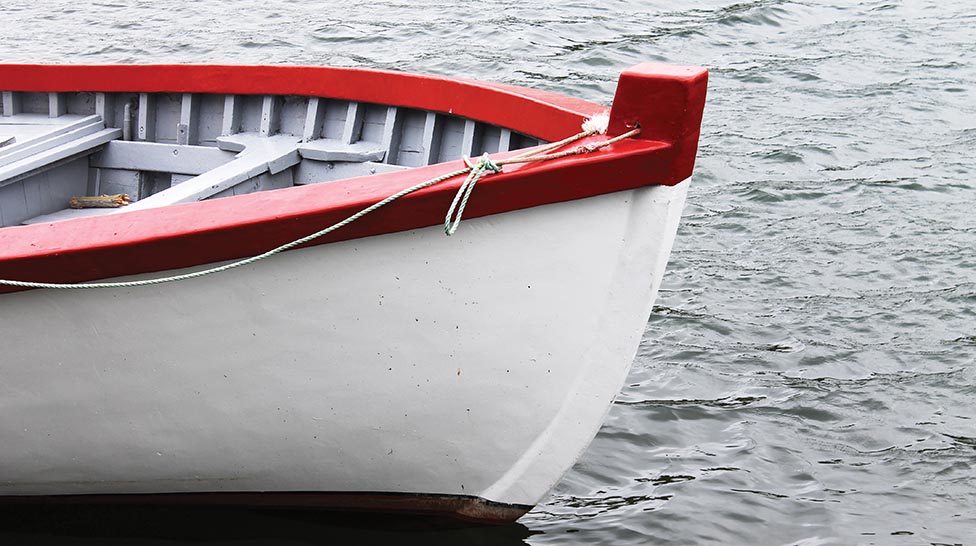 Henry Vokey was truly a legend in his own time.

He was a quiet, unassuming and humble family man who grew up in the small fishing village of Little Harbour, Trinity Bay — certainly not the kind of person we usually think about in a line that includes the word “legend.”

A master boatbuilder, Henry was known as the man of a thousand boats.

Like many Newfoundland and Labrador men, Henry developed a keen interest in the art of wooden boatbuilding when he was a boy. From a family of Trinity Bay boatbuilders dating back to his grandfather, Nathaniel Vokey, in the 1800s, Henry’s early interest in wooden boat construction grew into a passion and by the time he was a teenager, he had built several small boats.

Henry didn’t like making mistakes, which probably explains why he waited until the mid-1950s before he turned his craft into a commercial business. After all, his father told him he’d starve to death if he thought boatboating would pay the bills.

He probably knew all along that one day it would be his full-time career, but first, he needed to know that his boats were equally as good as those built by older and more experienced men.

Living alongside some of the best builders in the province, Henry waited and observed until he was fully confident. Finally, at age 26, he decided to build a larger-than-average wooden boat to sell. It was a 32-foot schooner. 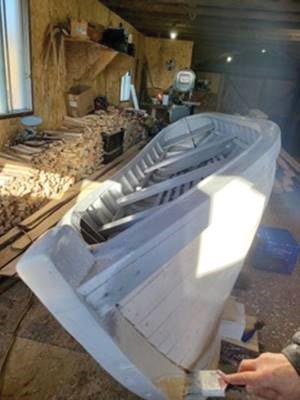 It wasn’t long before word got around that Henry’s boats were extremely well constructed and demand increased significantly for a variety of boats including punts, motorboats, dories and sailboats.

By the time Henry knew for certain he could make it as a boatbuilder, he had married Caroline (Carrie) Vatcher and they were well on their way to raising a large family.

In the early 1960s, the Newfoundland government had implemented a resettlement program to move people from small outports, especially those on islands or otherwise inaccessible by road. The idea was to consolidate those communities to a larger town — a so-called “growth centre.”

In 1963, it was obvious that Little Harbour had no future, so Henry and Caroline decided to take their 12 children and move to the town of Trinity. Their thirteenth child, Bernice, was born in Trinity. That was the year Henry built his largest boat to date, a 45-footer.

Jerome is no slouch when it comes to constructing wooden boats either and has approximately 200 to his credit. Many Newfoundlanders know Jerome for his work at the Wooden Boat Museum in Winterton, Trinity Bay.

Besides his construction work there, Jerome teaches the fine craft of wooden boatbuilding to hundreds of wooden boat enthusiasts. Some even come from outside the province.

Jerome says “Mr. Vokey,” as he respectfully refers to his idol, had a unique style that set his boats apart from the rest. The differences were subtle but obvious to some.

“I don’t think most people would notice, but to boatbuilders and some others, including fishermen who know the craft, would look at a boat coming in the harbour and say, ‘that looks like a Vokey boat.’” In fact, the “Vokey” boat is what Henry’s vessels were most often called. His boats became a brand.

“Another thing about Mr. Vokey that perhaps not everyone knows is that he was also the designer of his boats. He never built from ‘drawings,’ but rather he would chat with a client, many of them fishermen, and when he got a good idea what the client wanted, he would build a full model to scale and build the vessel from that,” says Jerome.

He hastens to add that Henry also built nearly all his wooden vessels from wood that he cut himself.

“He was an amazing man,” Jerome says admiringly.

Henry watched first-hand how the demand for wooden boats changed from the 1950s to the 1990s mainly due to changes in the inshore fishing industry. 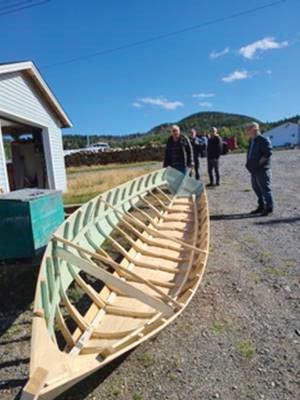 Henry’s last boat — a 15-foot Rodney. Henry’s son Wayne had to take over the completion of the small boat when Henry’s health worsened. Submitted by Sharon Vokey

For years the mainstay in the fishery was inshore cod caught in trap boats and other similar small vessels. As cod stocks declined, fishermen added other species to their annual catch and that required larger boats to travel farther offshore. Those boats were generally known as longliners and often stayed at sea for more than a day.

Subsequently, fishermen need much larger vessels and moved away from wood to steel and fibreglass. The decline of cod stocks accelerated at a much faster rate in the 1980s until the federal government placed cod fishing under a moratorium in 1992.

For Henry Vokey, the cod ban meant the beginning of the end and Vokey’s Shipyard, which once employed more than 40 people, was forced to close its doors.

Henry was in his 60s at the time, but retirement never crossed his mind. He didn’t know what the future held, but he knew boat building was going to still play a significant role in his life.

Outport Newfoundlanders are a nostalgic lot and many of them couldn’t imagine living in a community without wooden boats in the harbour and it wasn’t long before people were calling Henry with a request to build a wooden boat. Some wanted to keep the classic trap skiff style alive, while others wanted punts and dories — all were pleasure boats and many were powered by outboard motors.

Then came a growing demand for boats with even more authentic traditional styles. There was a resurgence of wooden boats powered by make-and-break inboard engines that were very popular for several previous generations.

Henry’s son Wayne worked alongside his dad for decades, starting when he was 16. In fact, Wayne completed his father’s last boat when Henry’s arthritis made carpentry work painful.

Jerome Canning says Wayne is one of the best wooden boatbuilders in the province today. So far, Wayne has built more than 200 boats, but admits he will never come close to his dad’s number. When asked if Henry’s description as “a man of a thousand boats” was based on fact or just a means of making a point, Wayne says it is possibly factual.

“If you take into account all the models he built and then the little boats he built in bottles in his late years, 1,000 doesn’t seem that far off,” he says, adding that there were times when they had multiple boats under construction that were built by both Henry and the boatbuilding crew in the Vokey shipyard.

While some of those weren’t built totally by Henry, he played a large role in each construction.  These days, Wayne is still busy filling orders coming in for classic wooden boats. 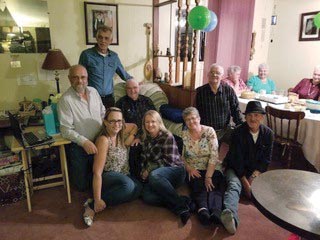 All 10 of Henry and Caroline’s surviving sons and daughters surrounded their dad on his 89th birthday in 2018.
Submitted by Sharon Vokey

Henry became a media star in 2009–2012 when CBC Television’s Land and Sea program took a keen interest in his work. In 2009, host Pauline Thornhill did a program about Henry called Wood or Nothing. Pauline was also there the following year when Henry laid the keel for his 44-foot, two-masted schooner. She was also there when the Leah Caroline was launched one cold, misty day in July 2012 and named the show One Last Schooner, the vessel Henry named after his granddaughter Leah and his wife Caroline.

At first, his wife worried the task might be too much for Henry. She reminded him that he was almost 80 and his worsening arthritis made it difficult to work with carpentry tools. She tried to talk Henry out of starting the project, but when she saw the joy her husband was getting from it, she changed her mind. Among her dying words to Henry was her wish that he would finish building the schooner. Sadly, she passed away in 2010 and didn’t see Henry’s schooner with her name on the bow slide gracefully into the ocean in 2012.

Besides being the star of a couple of TV programs, Henry was recognized several times for his outstanding contributions to Newfoundland and Labrador society:

In 2007 he received the Order of Newfoundland and Labrador

Henry’s prestigious accolades were well deserved and he was certainly appreciative, but he was a very humble man who said it was perhaps better suited to others.

I was in attendance when he received one of his many awards. When I congratulated him and asked how he felt, he summed it up gracefully and humbly, “it’s nice, but sometimes I wonder what all the fuss is about,” he said smiling.

Ten of Henry and Caroline’s 13 children are still living and they know exactly how their dad felt about the high-profile recognition he received.

The youngest of the clan, Bernice, said when she thinks of her dad now, it’s not his decorations she recalls. She remembers the humble, gentle man who loved family gatherings when Henry would grab his button accordion and play a few jigs and reels to start a kitchen party.

“All that other stuff is really nice,” Bernice smiles, “but to us, he was just dad — a wonderful dad.”

No Replies to "Henry Vokey: Man of a Thousand Boats"