In A Holding Position — Michael Crockwell

If you were looking to anchor your boat in the Bronze Age, from 3300 to 2100 B.C., you’d tie a rope around a heavy rock and throw it overboard.

These primitive anchors got a little more sophisticated with the addition of grooves and sticks and the killick was born. Gaelic for anchor, killicks were still being used in Newfoundland and Labrador in the last century.

The word anchor itself is so old that it’s derived from not only a Latin word “ancora” but a Greek word before that. In fact, the first record of an anchor design was found on Greek and Syrian coins about 750 BC.

In its simplest terms, “An anchor holds a floating object in position,” says Michael Crockwell, who has worked 35 years with the Canadian Coast Guard’s (CCG) Maritime and Civil Infrastructure (MCI) branch within the Integrated Technical Services (ITS) directorate. “There are many different types of anchors, mainly the size and weight is the big difference.”

Crockwell is the Production Manager for Newfoundland and Labrador in ITS’s Marine and Civil Infrastructure, Atlantic Region. His section is responsible for the repair and maintenance of a litany of assets. 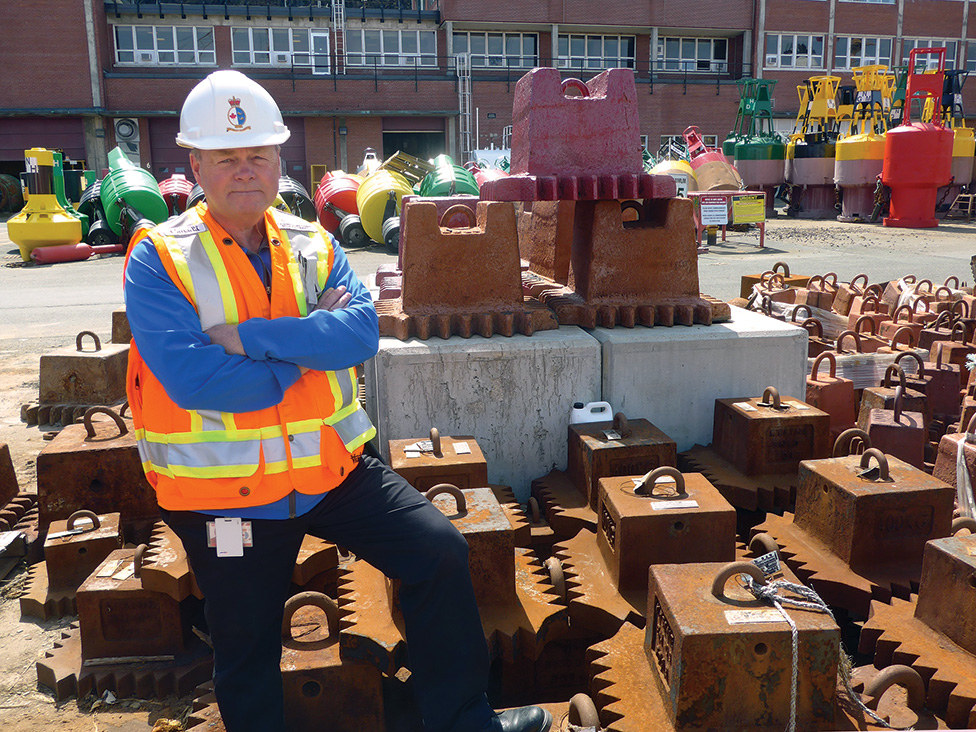 Michael Crockwell in a field of “The Crock” anchors.

Speaking of big anchors, they can weigh anywhere from 150 to 4,000 kilograms and be made of concrete or steel. While they do their job well, there are problems associated with them.

“They’re hard to handle,” says Crockwell, “and take up a lot of room to store. Also, because of the height of the taller design, they often have to be cast in two separate pours of molten steel, leaving a future risk of the anchor cracking into two pieces.”

So, in 2005, Crockwell, someone who likes “to find solutions to problems,” set about building a better anchor.

“I had a number of prototypes constructed that were made from wood. I had to calculate the different physical size for each weight class.” The success was almost immediate and there was a prototype in only six months.

The manufacturer was consulted and changed the design to what Crockwell thought would fix the issues. The first batch was put in service and the Canadian Coast Guard Fleet really liked them.

Crockwell’s new anchor design is like the little teapot, short and stout. It has a low centre of gravity compared to tall anchors and still weighs the same. Because of its lower stature it is more stable on the decks of buoy tenders than the traditional design which is important for the safety of crewmembers. Additionally, traditional anchors can tip over and drag along the ocean floor, while the new design remains stoutly in place.

It’s scalable in various sizes. Crockwell describes it as, “a square block (cube shaped) made of cast steel with serrated teeth on the bottom and a ring on top for the mooring line to hook it to. They come in weights of 300 to 8,000 pounds.”

Crockwell’s manager, Superintendent Dan Pike, was so impressed, he nicknamed the new anchor, “The Crock,” which Mike admits he finds a bit embarrassing.

The Crock is manufactured in Newfoundland and Labrador and has become the gold standard of anchors for the Canadian Coast Guard. There are over 600 Crock anchors in Newfoundland and Labrador waters alone, and many more across the country. It is also included as an option in the National Master Standing Offer and versions of it have been made in China.

What makes the Crock better than the previous anchors?

“Less cost, it’s more stable on the deck of the ship due to its low center of gravity which was a safety issue and has arguably better holding power on the seafloor.”

In January 2017, Michael Crockwell was recognized with a Canadian Coast Guard Exemplary Service Award for his 35 years of service at sea and ashore. “I was surprised and I felt very honoured,” he says. “It was a privilege to have worked for CCG and it was a great way to end my career.”

“My college wrestling coach gave me a piece of advice. He told me one time when I was at my first tournament to — after I was nervous and did not know what to expect — ‘try something’ (make a move) and it made so much sense. At least I went away thinking that I made an effort. That is what I applied to work — I tried something and I can hold my head up thinking I gave it my best effort.”

Crockwell is looking towards retiring in the fall of 2017, so whether it’s anchors aweigh or he drops his anchor to represent the end of a long journey, “the thing I would like to say the most is that the Coast Guard is like a big family and we’ve all got each other’s back. I will always remember the people I worked with as professional and dedicated and it was a pleasure working with and for them.”

On the Waterfront - September 2017

Government Document is an Insult to Fishing Industry

No Replies to "In A Holding Position — Michael Crockwell"