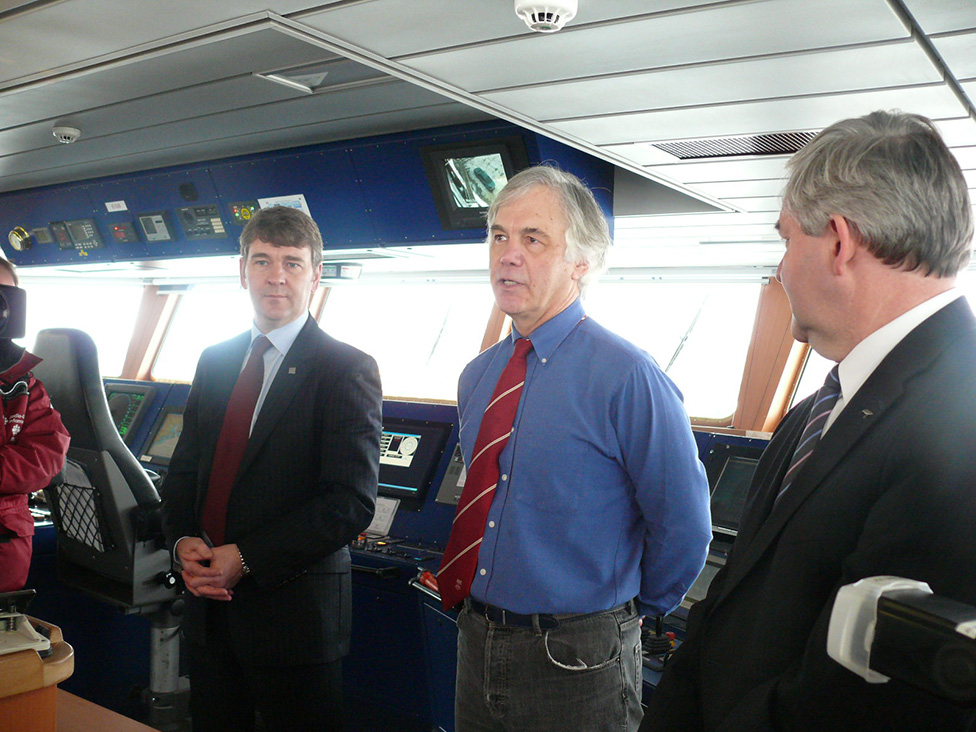 Dr. George Rose is one of the world’s leading authorities on codfish.

Born in St. John’s, Newfoundland 67 years ago, Rose never had a family connection to the sea; his father was a geologist, but somehow George knew at a young age that ultimately he would wind up working in the marine world.

“It must have been the salt sea air in St. John’s,” he laughs.

That salty air must have had a powerful impact because his family had moved to Ottawa by the time young George started school. But, despite growing up in Ottawa and later attending several Canadian universities and working at various jobs around the world, including five years in Africa, he always considered St. John’s “home” and when he came back to live in Newfoundland, 20 years after moving away, it was almost like he had never left.

“It was amazing; I even knew all the streets and the neighbourhood where we lived near Holy Heart School in the center of the city.” 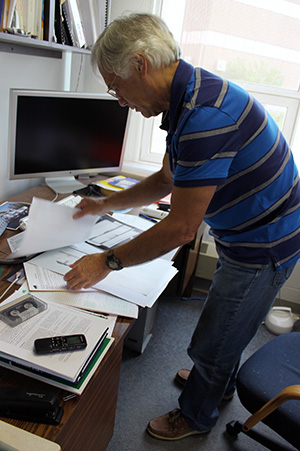 Dr. George Rose looks through some printout copies of early acoustic surveys as he clears his office just prior to retirement from his current position with the Marine Institute in St. John’s.

Rose had a taste of the fish business before becoming a fisheries scientist. He owned and operated a sport fishing outfitting business in Northern Ontario, but the tipping point leading to what would ultimately become his scientific hallmark came when he was doing research on spawning Lake Trout in Lake Superior.

“We had traps, gill nets and every kind of fish-killing device known to man and science and we’d go out there and kill half of them to get an estimate of the population. I was a young guy and I remember thinking this is wrong — there has to be a better way of doing this.”

And there was a better way, but it took a long time before Rose could get someone to pay attention.

“I went to Canadian Tire and got one of those little echo sounders [fish finders] and I had a pretty good idea where fish were in the lake, so I put it on a little speedboat and it worked. I thought this is the way to go – we can count every fish in this lake and not have to kill one,” he says.

Feeling really good about his new and somewhat revolutionary breakthrough, Rose quickly developed a proposal for his bosses. He knew that finding a school of fish with a sounder was one thing, but counting individual fish would take some fine-tuning of the technology, but still he was convinced that it was the way to go. However, he didn’t get the reception he expected

“They laughed at me. They said it was too crazy and that I should just go back to the traditional method of counting. There was no way I could do that so I quit.”

Scientific echo sounding as a method of counting fish had already been introduced in some countries, but it was still a relatively new concept and very expensive. But Rose was consumed with the technology and determined to make it work in Canada.

“That’s when I had an idea. I realized I needed to find somebody with enough clout to get this equipment and we could use it on a fishery that’s really valuable — I need to go to Newfoundland.”
Rose found someone with the clout to get funding to purchase equipment and then he worked out a deal with Fisheries and Oceans in Newfoundland to start research.

Beginning by monitoring fish in the Labrador Straits, Rose developed and fine-tuned the acoustic technology to monitor codfish in Newfoundland waters from that day to this.

George Rose was passionate about his scientific work. He is an excellent communicator who has a gift to paint vivid word pictures and did it with great gusto.

He became a regular on CBC’s Fisheries Broadcast in the 1980s and 1990s, expounding on his observances of cod behaviour through his acoustic technology. He closely monitored cod’s annual migratory passages from wintering offshore to their pilgrimage through the so-called Bonavista Corridor and then dispersing up and down the inshore waters off Newfoundland’s eastern coastlines. 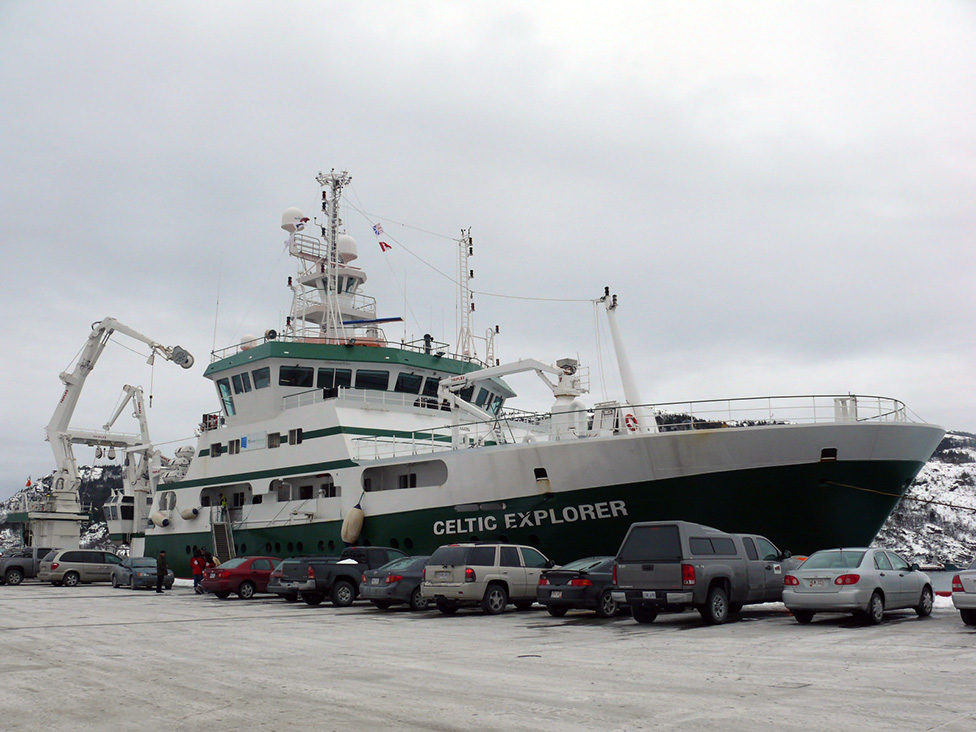 It wasn’t long before Rose was making frequent appearances in all media, first locally and then nationally and internationally. In the 80s, his profile skyrocketed simply because of the way he made fisheries science interesting and relevant to ordinary people. In the late 1980s and early 1990s, cod stocks were rapidly declining and Dr. Rose was called on more than ever to tell what was showing on his all-seeing technology. And he didn’t try to sugar coat the facts, despite the wishes of some fisheries managers and politicians who were confused and afraid to even consider a cod collapse and its implications.

What set George Rose apart from many other scientists in the constant debate about the disappearance of cod was he never changed his tune and he was always an optimist. He always believed cod would come back if environmental and oceanographic conditions changed to traditional levels and if DFO gave the stock a helping hand in the form of maintaining a moratorium on fishing for as long as possible.

He believed cod stocks would return — he just didn’t know when because replenishing the largest cod stock in the world wasn’t going to happen overnight because cod take several years to reach commercial size.

But Rose was patient and finally, in 2007, 15 years after the ban on cod fishing, his surveys hinted that things might have started to turn around. Some scientists might have been gun-shy to raise hopes on what might have been a one-time blip but, as always, Rose simply reported what he saw and let next year tell its own story.

Rose stepped up his research and in 2009. He was instrumental in convincing the Newfoundland government to charter the best offshore fisheries research vessel available for several weeks a year to get more expansive and better data.

For the past three years, the northern cod stock has been rebounding at a rate that surprises even George Rose. He is still analyzing the 2015 survey data, but it looks as if the biomass is back to near pre-moratorium levels. That coincides with what fishermen are seeing as well.

Rose says the cod collapse of the late 1980s – early 90s represented the worst and best of times of his career.

Watching millions of tonnes of fish disappear, throwing thousands of fishermen and plant workers out of a job was difficult, but scientifically, it became the biggest challenge of his career.

Everyone was demanding to know what happened — would cod return and if so, how long it would take? Trouble was, there were no answers and research took a sharp turn to a different direction to try and figure out some clues to the answers. The pressure to find those answers was intense, but the science was exciting.

Now that Rose is coming to the end of this phase of his career, it somehow seems fitting that northern cod have rebounded. The species that he studied and sometimes agonized about for 30 years have come home again.

Because he worked for years in between his university studies, Rose didn’t complete his doctoral program until he was in his late 30s, but his academic accomplishments are impressive. He was the Natural Sciences and Engineering Research Council of Canada chair of Fisheries Conservation at the Marine Institute prior to becoming director of the Centre for Fisheries Ecosystems Research (CFER).

He is cross-appointed to the Department of Biology and an adjunct professor with the Centre de Geomatique, Laval University. His research interests are in acoustics, fisheries conservation and the effects that fisheries and climate change have on fish stock dynamics. His book, Cod: The Ecological History of the North Atlantic Fisheries, describes the history of the Grand Banks ecosystems from geological times to the present and their fisheries. He is now working on a second book. He is also editor-in-chief of the international journal Fisheries Research.

The paperwork says his last day on the job is September 12, 2015, but he readily admits that he will continue working, probably as long as he is healthy — it will just be in a different capacity and mostly from home — which, incidentally, will be on a small island near Vancouver Island, British Columbia. But despite that distance, we probably haven’t seen the last of George Rose yet.

No Replies to "Internationally Renowned Fisheries Scientist Retires — Sort Of"