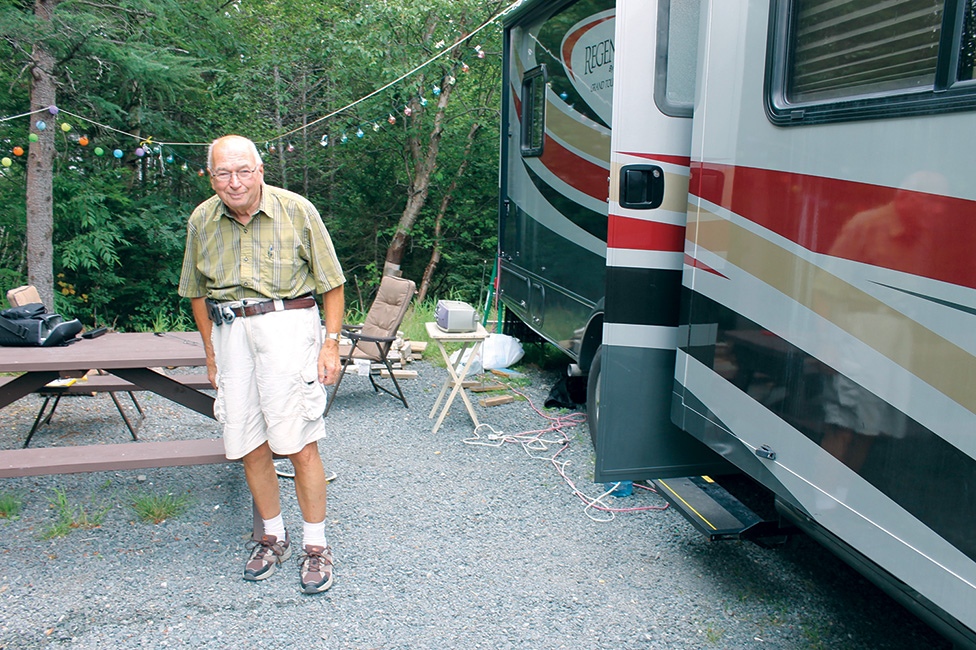 Kevin Wadman sits in a camp chair next to his motor home in a Pippy Park campground.

The newly retired fish buyer and processor from Arnold’s Cove, Newfoundland, was enjoying a relaxing, sunny afternoon in August, 2016 along with his wife, Sylvia, and their daughter Rhonda. Surrounded by thick forest, it is hard to believe the campground is just a few minutes walk from Confederation Building in St. John’s. It’s been one of Kevin’s favourite camping areas for almost 30 years, largely because of its convenient location.

Kevin turned 85 this year and after working for more than 70 years, he thought it was time for a change — time to relax a bit. He does a lot of gardening these days.

Kevin grew up in Bar Haven, a small island in Placentia Bay, and worked in the family business with his grandparents.

“My grandfather was a fisherman who went on to buy [Newfoundland] lobster for a company in Nova Scotia and my grandmother ran a small general store.”

Kevin moved to Arnold’s Cove in 1958, and along with his brother, expanded the Bar Haven-based company to include the purchase of trucks and vessels to carry out a freighting business. In the mid 1960s, the Newfoundland government implemented a resettlement program and paid families to move from their homes on the many islands around Newfoundland, including a dozen or more communities in Placentia Bay. Kevin and his brother saw a business opportunity in resettlement. Many people physically floated their houses from the islands to their new home communities so the Wadmans purchased tractors and boats and constructed barges to work in the house resettlement program.  Kevin and his brother had a number of businesses operating by the late 1970s. Besides their fish and freighting companies, they had a building supply company, a garage and a wholesale business. They were also in the construction business for several years, building wharves and even several sub-divisions and housing projects for the government.  But it all came to a screeching halt in the early 1980s when things turned sour. Kevin admits that they had not been able to manage their businesses as well as they should, but the clincher came in 1982 when the financial world was hit by a massive increase in interest rates. Bank lending rates went from single digits in the late 1970s to as high as 23-25 per cent. Kevin reminded us what that meant in simple business terms.

“If you were operating a business with a million dollars financing, it meant you had to pay upwards of $225,000 in interest and that was not something many companies could stand.”

Not only small operators like the Wadmans wound up on the chopping block; nearly the entire group of large offshore/deep-sea fishing companies in Atlantic Canada succumbed to the sting of high interest rates and one after the other, they fell into bankruptcy. Governments instituted a very elaborate and expensive plan to restructure the deep-sea sector but little help was available for the smaller, inshore guys. In fact, Kevin Wadman remembers the banks were totally uncooperative and didn’t offer any kind of assistance to help them get through the crisis and forced many companies into bankruptcy, including the Wadman fish business.

Kevin pauses to reflect on a couple of other problems that complicated running an efficient and productive business in some areas of Newfoundland. He says it was always difficult to find good workers to run a business and he claims that too many rural Newfoundlanders have a poor work ethic. We reminded him, that Newfoundlanders in Ontario and Alberta have traditionally been touted as exactly the opposite — as having strong work ethics.

“That’s because we’ve always exported all our best people,” he quickly retorts.

Kevin’s blunt criticisms may surprise some who know him.  He is known as a man who deliberately kept a very low profile, offering little or no comment on things that bothered him. In fact, Kevin has been so quiet that hardly anyone outside the fishing industry have ever heard of him but fishermen who dealt with him have good things to say.

Garry Smith from Gooseberry Cove, now living in Clarenville, sold fish to Kevin for decades. Garry speaks highly of Kevin saying he was always fair and upfront about everything and was a buyer he could trust.

After the crash in the early 80s, Kevin regrouped and decided to get back into the fish business. This time, he decided to go it alone.

After the Wadmans lost their fish plant in Arnold’s Cove, a much larger Newfoundland company bought it, but even Quinlan Brothers Company had trouble making it, work so Kevin bought it back in the late 1980s. He also purchased a small groundfish operation in Fair Haven about 15 miles southeast of Arnold’s Cove.

His company, Avalon Ocean Products, was small and therefore manageable by Kevin himself. The company only had a handful of permanent staff but operated nearly year-round in the ice-free bay on Newfoundland’s south coast. During production periods, their payroll consisted of 40-50 people.

“We were a very small business compared to the Quinlans, Barrys, OCI and several other large companies; our sales were less than $10 million a year,” Kevin says responding to a question about why he chose to keep such a low profile throughout his career. Small operations like his didn’t carry a lot of political weight in the big scheme of things and that suited Kevin just fine. He stayed under the radar and quietly got the job done his way. After being stung by the banks in the early 80s, Kevin never used bank credit again and that served him well because interest rates soared again in the 1990s.  It didn’t last as long as in the previous decade but if he had been beholding to the banks, it was long enough to have created problems.

No Replies to "Kevin Wadman: Time for a Change"