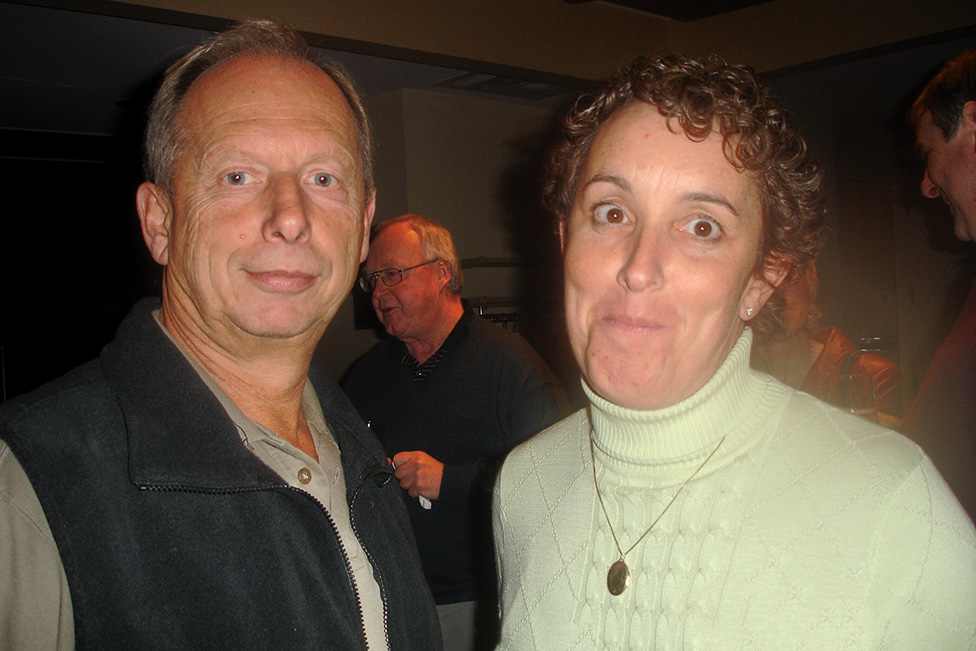 Klaus Sonnenberg: One of a Kind

Klaus Sonnenberg died with his boots on.

For those of us who knew Klaus, that was not surprising because he hardly stopped working long enough to take them off.

In fact, Klaus died on the job at a time when everybody else in Atlantic Canada was sound asleep on the weekend.

It was 5 a.m. on Saturday, August 16, 2014, when the plane Klaus was piloting crashed just metres short of the airport runway in his hometown of Grand Manan, New Brunswick. He was returning from an air ambulance flight to Saint John.

A long-time friend who was a paramedic on the mission that morning also died.

Klaus and William Mallock flew countless missions like that one and saved dozens of lives by getting critically-ill patients to hospital in Saint John in a matter of minutes, instead of the hours it would take to get off Grand Manan Island and make the trip, first by ferry, and then by road.

“There’s a number of people who wouldn’t be walking today if it weren’t for Klaus,” said the MLA for the area, Rick Doucet, a former minister of fisheries in New Brunswick.

Doucet, a former commercial pilot who had flown with Klaus many times, described him as an excellent pilot who “knew his stuff.”

A second pilot and a nurse were also injured in the crash but later recovered.

Besides being a pilot with Atlantic Charters, Klaus was the founder and president of the company that operates a fleet of six aircraft. He and his wife were co-owners.

Klaus Sonnenberg was perhaps best known in most of New Brunswick through his aviation company. He was also very well-known in the fishing industry in the Maritimes. He was general manager of the Grand Manan Fishermen’s Association and a strong advocate for fishermen in all regions.

“Klaus was a visionary,” says his wife and business partner Melanie Sonnenberg.

“He could see the need for things years later but often people would oppose the idea initially because they couldn’t visualize that far ahead but would later admit they couldn’t live without now.”

Klaus Sonnenberg’s road to Grand Manan and the aviation business was zigzagged. Born in Germany, Klaus came to Canada with his parents when he was six. He grew up in British Columbia and later earned a degree in Zoology from the University of Idaho.

He began his first career as a park naturalist with Parks Canada in Cape Breton. It was there that Klaus had an opportunity to observe the fishing industry closely because one of his best friends was a fisherman.

Attracted to the industry at various levels, Klaus became a fisheries officer in the late 1970s and ended up on Grand Manan. He married Melanie Ells from Grand Manan in 1982 and made the island in southwest New Brunswick his home.

Grand Manan was also home to an active fishing industry and through his work as a fisheries officer Klaus enjoyed working with fishermen, although he was not always popular with some, especially when his job required him to enforce policies that didn’t sit well with them. And, some of the policies that he had to enforce didn’t sit well with him either.

Eventually Klaus realized that working with government bureaucrats wasn’t the route he wanted to follow for the rest of his career and that’s when the idea of the airline business was born.
But, as Melanie pointed out, the visionary in Klaus didn’t restrict his thoughts to just one focus. He also saw a need for Grand Manan fishermen to unite, to speak with a single voice in order to be heard in government and bureaucratic circles.

At about the same time that he was starting an airline business, several fishermen approached him and asked if he could help them organize. Klaus didn’t hesitate and the Grand Manan Fishermen’s Association (GMFA) was formed.

Klaus was asked to serve as general manager, a position he held to the day he died last summer. Melanie is still projects manager with the GMFA, although she laughs that the title is a fancy one for jack-of-all-trades with the group.

Through the Association, Klaus became a strong advocate for Grand Manan’s fishermen and also for fishermen in all the Maritimes. In fact, Klaus was able to advance his broader fisheries vision through another fishermen’s organization that he and Melanie both served as executive members. The Eastern Fishermen’s Federation (EFF), described as a “parliament” for Maritime Canada fishermen, is an umbrella group made up of representatives from 22 fishermen’s associations in New Brunswick, Nova Scotia and P.E.I., including the GMFA.

Melanie says running the Fishermen’s Association was tough — really tough, especially in the early days. One file she remembers that caused a lot of consternation involved a conflict on scallop and lobster fishing.

“Scallops were knee deep everywhere, but the fishery wasn’t managed. Anyone who could haul a [scallop] drag was doing it — it was like a recreational fishery in terms of management,” Melanie says.

But many lobster fishermen worried about the long-term impact of such proliferation of scallop dragging and wanted controls put in place. They decided to ask for a two-mile zone around the island and their manager, Klaus was tasked to take the proposal to the federal government.

“Some fishermen were incensed,” Melanie recalls. “And, DFO were surprised too because they were not accustomed to fishermen asking them to take restrictive measures — it was not the norm; they were perplexed at first but they saw the merit in it and eventually implemented the zone,” she says.

In retrospect, most people agreed the move saved the lobster fishery around Grand Manan and also helped the sustainability of the scallop fishery.

Melanie also remembers when the region’s fishery was transitioning from finfish to shellfish and Klaus recognized that fishermen would need a marine centre with a machine to lift boats from the water to a docking area.

She says his idea was not widely supported at first although later, his opponents admitted that they wouldn’t be able to operate their business without one.

Melanie says one of his great joys was to have played a role in setting up the Lobster Institute, established in 1987. Grand Manan is literally on the doorstep of the state of Maine and the Institute is very much CanAm.

Established under the auspices of the University of Maine, the Institute tackles issues common to both countries. The annual “Town Meeting” of the Institute will be held on March 20-22, 2015 in Saint John and will be dedicated in honour of Klaus.

Meanwhile, Melanie and her sons Peter and Paul are working day and night to carry on the business of Atlantic Charters. Both sons are airline pilots — Peter flies with the family business and Paul flies with a company in Quebec.

Melanie says that although her husband’s death leaves a huge gap in running the company, she and the sons are fully committed to continuing Atlantic Charters with absolutely no disruption in service.

No Replies to "Klaus Sonnenberg: One of a Kind"