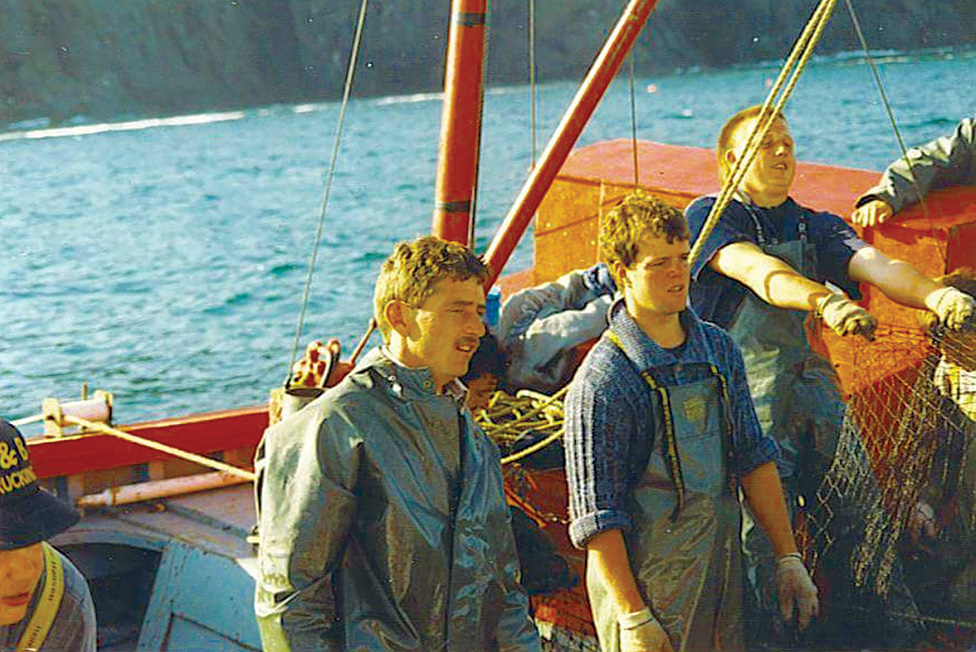 Above photo: A young Sam Gosse (right) hauling a cod trap before the cod moratorium off Torbay N.L.

Sam Gosse and his brother Tommy have built very successful careers, but they started from very humble beginnings.

Sam, 45, is just one year older than Tommy and the two have always been very close.

Neither one is sure how long their forefathers fished, but they know it was as far back as their great, great grandfather.

“They say our great grandfather was the first fisherman in Torbay to have an engine in his fishing boat,” says Sam.

As with many descendants of a long line of fishing families, it was assumed that Sam and Tommy would be fishermen as well — and they were. Like all the others, they started fishing when they were still in school during their summer vacations and then full-time after they graduated.

During Sam’s last year of school and Tommy in his second last year, life took a dramatic turn for the worse for the entire Gosse family.

Their dad, Sam Gosse Sr., became ill and died on his 24th wedding anniversary in September 1988. He was just 58.

Sam and Tommy were fishing that day. 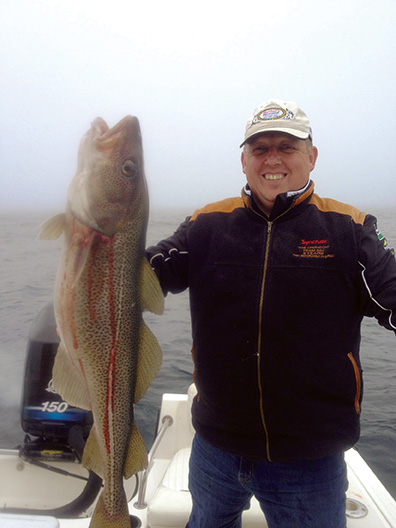 Sam showing off a fine cod during the 2015 food fishery.

“The weigh master at the harbour broke the news to us when we came in from fishing early in the morning. We were told to go straight home, our father had been taken to the hospital. I was 17 and Tom was 16,” Sam recalls.

With the death of their father, the Gosse boys were suddenly thrust into a whole new reality. As the eldest sons, they knew they had to do the best they could to help their mom who was left with two young children and a pittance of income because her husband didn’t have the means to grow a savings account and, as a self-employed fisherman, had no pension plan.

The brothers continued to fish and worked as hard as they could to make ends meet for the family, but then when they were in their early twenties, the unthinkable happened.

The largest cod stock on earth collapsed and on July 2, 1992, (then) Federal Fisheries Minister, John Crosbie, announced a total ban on cod fishing, effective at midnight that night.

The news of a moratorium was almost incomprehensible for Newfoundland fishermen, including the Gosse brothers from Torbay who were both watching Crosbie on television that night.

“A bunch of us were at Liddy’s Pub, a local bar, watching the announcement on TV and we were in shock,” Tommy recalls.

Although the Gosse brothers were only in their early twenties, fishing was the only life they knew and suddenly it was snatched from them.

The Gosse’s were like many Newfoundland and Labrador fishermen on the night of July 2, 1992. After the initial shock of the announcement, there was anger. Many fishermen said they felt betrayed because John Crosbie was one of their own, a fellow Newfoundlander.

“Absolutely,” says Tommy Gosse who echoed the sentiment that Crosbie should have known better than to hit inshore cod fishermen just as they were about to start their fishing season.

But Newfoundland and Labrador fishermen are resourceful people and it wasn’t long before Tommy and Sam had a plan for the future.

Tommy listened to the advice of older fishermen who encouraged him to study a trade and move on. They knew the cod fishery was not coming back anytime soon so Tommy heeded their wisdom and attended a trades college for two years to learn skills that would qualify him for work in the oil and/or construction industries.

Sam took a different route and went looking for a job fishing salmon in British Columbia.

“Air Canada had a special fare on for $150 to Vancouver so I took off with every dollar I had; about $100 I think it was. But that didn’t pan out. The salmon business in B.C. wasn’t as robust as I thought and I had to look for work in Vancouver. A week later I was working in a glass factory.”

Three years later Sam grew tired of working in a factory. One of his sisters was living in Fort McMurray at the time and she suggested he’d come to Alberta and check out jobs in the oil industry.

Sam had no problem getting a job. Once settled in and living in his own apartment, Sam called Tommy who had finished college by then and told his younger brother to come and join him. Tommy agreed and, like Sam, didn’t have long to wait before he landed a good job. He is now in a supervisory position with Syncrude, one of the largest employers in the oil patch.

At one point there were five Gosse siblings in Fort McMurray — Sam and Tommy along with two younger brothers and a sister were all doing well. 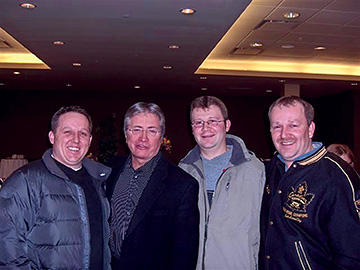 But for most of the Gosse family, the call of a simpler life back home by the ocean was strong and despite the good incomes and promising futures, one by one with the exception of Tommy, they started trickling back to their roots.

Sam’s decision to pull up stakes in Alberta was hastened in 2007 when Newfoundland and Labrador Premier Danny Williams visited Fort McMurray in a bid to entice Newfoundlanders to come back home.

The offshore oil industry in Newfoundland had grown to a multi-billion dollar business and they needed experienced workers both offshore and in other industries needed to develop infrastructure required in a booming economy and an increasing population.

Williams knew exactly where to go and how to make his pitch. Sam Gosse was exactly the type of person Williams had in mind.

Sam, Tommy and another brother Darrell, met Williams and were impressed with what they heard.

Sam was primed to make a move. He had married a woman from back home and they planned to start a family and for them, Torbay seemed like a better place to raise children.

In 2007, Sam and Leslie moved back and Sam started his own business in land development and building construction. He is still in the business, but with the dramatic downturn in the oil industry, work is not as plentiful as it was five years ago in Newfoundland.

He also works in the mining industry as a company supervisor in Voisey’s Bay, Labrador, on a week on/week off schedule. Sam and Leslie have two children and are content now that they are home again.

Tommy Gosse may have been tempted to make the journey back to the rolling green hills of Torbay and a quieter life style but he and his wife Lynn, also from Torbay, have decided that after 16 years in Fort McMurray, such a big move was daunting.

“I have a good job with Syncrude, a good company that pays well with a good pension plan, Lynn is a nurse with Suncor and life here is good for us,” Tommy explains, adding that they have two children for whom Fort McMurray is home. They were born there.

Confirming Tommy’s rationale to stay put is the fact that he has seen a number of his Newfoundland friends leave Fort McMurray only to come back to Alberta again when they discovered the job market back home is not what it was as recent as two years ago.

Even though those guys gave up a job and the seniority they had built, now they have to start over again.

The moratorium on cod fishing continues in Newfoundland and Labrador waters 24 years after that iconic night in July 1992. The fishing industry survived, but the transition to different species, including crab and shrimp, took a toll on employment levels and a traditional way of life.

Young people like Tommy and Sam Gosse were uprooted and forced to move away from their homes in more than a hundred communities surrounding the province’s 17,540 kilometres of coastline.

The collapse of cod in 1992 meant hundreds of things to thousands of people. Of all those torments, one of the most emotional impacts was watching the end of a traditional way of life for hundreds of families.

When the Gosse brothers of Torbay and thousands more like them had to quit fishing, it was an abrupt and sad end of a tradition for five or more successive generations of a proud fishing legacy.

At the time of this writing, the fire that devastated Fort McMurray was in full force. The Navigator did manage to contact Tommy Gosse on May 4 and although he didn’t know if his house was still standing or not, he was certain of one thing. He wrote: “…we are all safe and away from the danger, and in my experience with the community in Fort Mac we will rebuild this place called home.”

Sealers Upbeat About This Year’s Hunt

No Replies to "Last of an Era"