In my last three columns, I have talked about the discussions that took place at a workshop CCFI held in September on the fishery of the future in Newfoundland and Labrador.

After hearing presentations from some very knowledgeable people on different aspects of the industry, participants in the workshop reached a consensus that we need a value-driven business model focused on maximizing the value obtained from our limited resources.

No one disagreed. That is particularly notable, because the participants represented pretty much the whole range of fishing sectors and our industry often seems to have difficulty reaching a consensus on just about anything.

But what does maximizing value mean?

Essentially, it means finding ways to put our fish catches into their highest and best uses. Another way to look at it is to maximize our output value per kilogram of catch. And output value can be measured as the average selling price.

It is worth noting that the fishing industry in Iceland has had this same goal for more than 10 years now. Although it harvests a number of different species, cod is by far the largest and most important part of that country’s catch.

Two things happened that forced them to re-think their industry: cod catches decreased substantially in Icelandic waters but increased a lot in the Barents Sea north of Norway and Russia. That meant Iceland had less cod to sell at the same time as large new supplies were coming into the market. They realized they had to do something to distinguish their products from the competition and get higher prices to compensate for decreased catches.

They invested a lot in research and innovation, with the goal of increasing export value per kilogram of catch. And they have been very successful in doing so. They did it by focusing on improving the quality of their raw materials, increasing their sales of fresh products to get the higher prices available for them, selling high-value portion-controlled frozen products, and obtaining extra value by utilizing by-products formerly treated as waste. 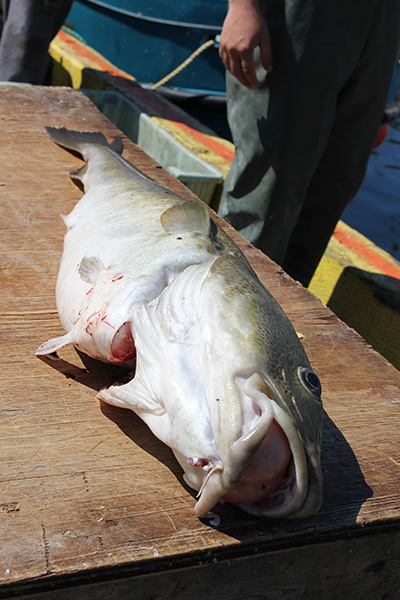 Achieving these things meant they had to improve their industry’s capabilities — which they did through research and innovation. Maybe, most importantly, they did these things through a collaborative effort involving their industry, the service sector that supports the industry, universities, and research institutes. As a consequence, they now have a higher output value than they had when catches were much higher and about 25 per cent of that value comes from by-products.

In many ways, we are facing a similar situation to that faced by Iceland.

Although we don’t know how far or how fast these trends will run, it seems reasonable to expect we will catch less crab and shrimp but more cod in the future. In the short term, we need to get more value from our decreasing catches of crab and shrimp. Over the medium-to-long term, we need to ensure we maximize the value we get from cod and maybe, other species that will increase in abundance as water temperatures warm up.

There are at least two very nice things about setting a goal of maximizing output value per kilogram of catch. One is that it benefits everyone in the industry, because there would be more overall revenue that can be shared among participants in the value chain. Second, it is measurable and transparent. Government keeps statistics about catches and export values, allowing us to keep track of how we are doing.

So, if maximizing value is what we want to do, we can learn a lot from what Iceland has already done. We may need to adapt what they have done to suit our local circumstances, but the way to maximize value has been demonstrated in actual practice.

To maximize value, we will need some advantages relative to others we compete with, so it may be worth reflecting on what those advantages might be.

We can start by identifying areas in which we are unlikely to have advantages. The fish species we harvest do not give us advantages, because others harvest them, too, often in larger quantities — similar to the situation with cod in Iceland.

We don’t have advantages in the technologies we use for harvesting and processing, since we typically buy them from international suppliers who sell to our competitors, as well. Raw material quality also doesn’t give us an advantage, because we have a longstanding reputation for quality that is inconsistent and can be poor.

We can’t claim an advantage in the products we sell, since we sell commodity products in bulk that are typically similar to products from suppliers elsewhere. And we don’t have a cost advantage, because we have to compete against suppliers that either pay lower wages or can utilize their assets for longer annual operating seasons.

Where does that leave us?

Well, probably our greatest potential advantage is our geographical proximity to two of the largest and most affluent seafood markets in the world — the United States and the European Union. In fact, these have long been traditional markets for us, although the EU now offers some significant new opportunities, because of the new free-trade agreement. But, to maximize value, we need to find ways to serve those markets better. We can do that by targeting high-value market niches, as the Icelanders have done. And we can try to find ways to extract value from by-products now typically disposed of as waste, at a cost.

To do those things, we need to improve our industry’s capabilities, something discussed at length in last month’s column. But, as in Iceland, it will likely require a collaborative effort involving all sectors of the industry, the industry support sector, universities, and research institutes. That won’t happen overnight. It can take years to create the capabilities needed. But it can be done and the benefits can increase as improvements are made.

Can we do it? Iceland has shown us the way. There is no better time to start than now.

Because this is the January issue, I wish everyone a happy and prosperous New Year. As we go into 2015, the industry faces many uncertainties and challenges but that seems to be true every year. If we want to be happy and prosperous, we will likely have to work for it. And working together, we can make it happen.

Peering Under the Surface

Keeping the Home Fires Burning in the New Year

No Replies to "Maximizing Value"