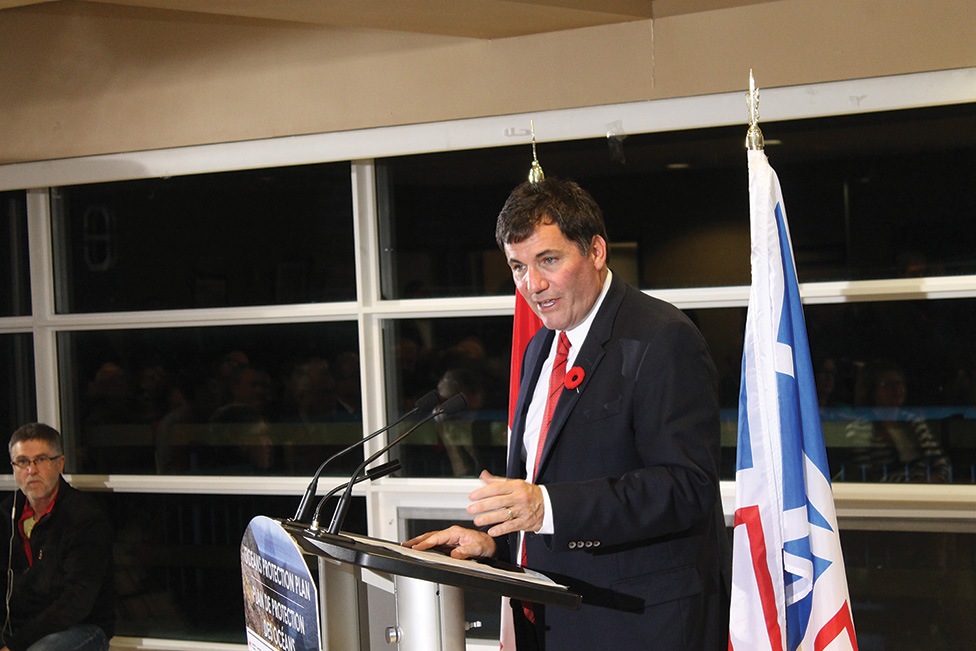 LeBlanc spoke of the forthcoming amendments to the Fisheries Act during his keynote address at the July 25 annual Canadian Independent Fish Harvesters’ Federation (CIFHF) meeting held in Chester, N.S.

“This would mean that the minister would be able to create regulation under law to prohibit a fisherman from using a licence to enter a controlling agreement or other arrangements that are contrary to social and economic objectives that are beyond the spirit and intent of the owner-operator and fleet separation policies,” LeBlanc said.

This was of course reference to the recent federal court decision in the Kirby Elson and Canada (Attorney General) case.

In the court decision, it was ruled that the owner-operator, fleet separation and PIIFCAF (Policy for Preserving the Independence of the Inshore Fleet in Canada’s Atlantic Fisheries) policies were within the authority of the Minister of Fisheries and Oceans and could be enforced. In May, Justice Cecily Strickland ruled the federal fisheries minister was entitled to strip fishing licences from Cartwright, Labrador fisherman Kirby Elson.

“Our victory at trial in this case reaffirms the authority of the fisheries minister to enforce the rules in place to ensure that the wealth and value flowing from our fisheries remain in their local communities,” said LeBlanc.

The CIFHF said it welcomed LeBlanc’s announcement of the recovery of lost protections through changes to the Fisheries Act, including protection for independent owner-operators.

“These owner-operators are the backbone of the economy of rural Canada and create and protect jobs for the middle class in those areas.”

The Maritime Fishermen’s Union (MFU) was also pleased with the owner-operator announcement by LeBlanc.

Carl Allen, president of the MFU, said he was thrilled with this announcement and sees it as a big win for the membership of the MFU and its families. He believed that this is a big step for Canada’s fisheries and coastal communities.

“There is much work to be done but we now have the strongest commitment we have seen in recent history.”

“We have aligned ourselves with other organizations under the CIFHF and this announcement is a result of industry coming together for the good of our Canadian fisheries. It is because of this recent announcement and the promised actions from the minister and the DFO that we believe industry collaboration is of utmost importance. The minister’s commitment proves this,” he added.

Graeme Gawn is president of the MFU Local 9 in southwest Nova Scotia and attended the July 25 announcement.

“This is what we have been working towards since 1997 and when these amendments are enacted and these policies become law, compliance with them will follow and the loopholes will close. The minister has delivered a firm and very strong commitment to introduce the proposed amendments to Parliament this fall and they could be enacted by spring of 2018. Inshore fishermen should celebrate this historic announcement.”

The Fish, Food and Allied Workers’ Union (FFAW-Unifor) also applauded LeBlanc’s announcement that the Department of Fisheries and Oceans will pursue amendments to the Fisheries Act that will protect the independent owner-operator fishery.

“The best way to build a strong middle class, create jobs and protect and strengthen the economy in coastal communities is through enforcing the owner-operator and fleet separation policies,” said Keith Sullivan, president of the FFAW-Unifor.

“Today’s announcement is the result of consistent calls from FFAW-Unifor and other fisheries organizations across Canada to keep fishing licenses in the hands of those who actually fish by taking concrete steps to enforce existing policies.”

“Across Canada, fisheries organizations are united in our call for enhanced enforcement and genuine protection of the inshore fishery,” continued Sullivan. “We will continue to hold the federal government accountable to their commitments to protect fish harvesters and the coastal communities.”

However, all fisheries organizations did respond in a positive manner to all of the contents of the minister’s speech.

In a press release, the Federation of Independent Sea Harvesters of Newfoundland and Labrador (FISH-NL) said it is outraged with what it called an attack by the federal Minister of Fisheries and Oceans on the province’s inshore harvesters.

“Dominic LeBlanc has said straight out he wants to devalue fishing licences when the only thing most inshore harvesters have to retire on is the sale of their license,” says Ryan Cleary, president of FISH-NL.

“LeBlanc also appears out to end the ability of inshore harvesters to pass on licences to their children, a tradition that’s gone on for hundreds of years and critical to the future or the inshore fishery.”

FISH-NL contends that LeBlanc said fishing licenses have become “over-valued” in recent years, and he wants to make it easier for young people to access the fishery by lowering the upfront cost of buying a licence.

“A system where access to a fishing licence is determined by who you’re related to or how many hundreds of thousands of dollars you have, or how much debt you are willing to take on, seems unfair,” LeBlanc said.

“It’s not the value of the license that’s the problem, but the fact there’s not enough fish to catch,” says Richard Gillett, vice-president of FISH-NL.

“It’s no problem for a fisherman to pay back a bank loan when he has fish to sell, but the quotas are that low now that an inshore harvester has trouble just paying for fees and operating expenses, and keeping himself afloat.”

Gillett said federal fisheries mismanagement is as bad today as it was in the early 1990s when the groundfish fisheries collapsed, pointing to an almost 63 per cent cut this year alone in the quota for Northern shrimp off southern Labrador and the Northern Peninsula.

No Replies to "Minister Commits to Uphold PIIFCAF"