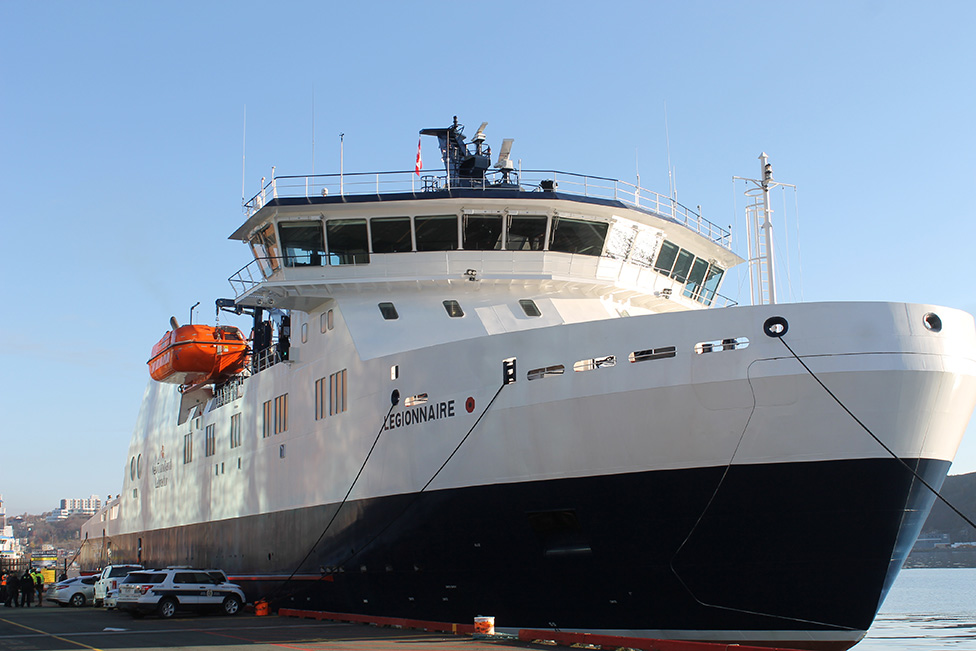 The new Bell Island ferry has finally made landfall in Newfoundland.

The 80.9-metre MV Legionnaire recently docked in St. John’s harbour and is the second of the two Ro-Pax ferries built by Damen Shipyards Group for the government of Newfoundland and Labrador. The launch and naming ceremony of the vessel was held at Damen Shipyards Galati in Romania, in July 2015. The first of the two vessels, MV Veteran, was launched in April 2015.

MV Legionnaire is named in honour of the Newfoundlanders and Labradorians that served the province during the past wars and global conflicts. The observation deck and the two passenger lounges are also named after four notable Bell Islanders to honour their contributions.

The ferry is specially designed for operating in thick ice conditions and will be deployed in the short-haul route between Portugal Cove-St Philip’s and Bell Island, the busiest route of the province.

The provincial government has not announced when the new ferry will go into service.

The steel-hulled vessel has an overall length of 80.9m, moulded breadth of 17.2m and a draught of 4m. The length between perpendiculars is 71m and depth to the upper deck is 6.5m. The ferry has a deadweight tonnage of 905t.

The ferry offers 130 seats in forward passenger lounge, 85in aft passenger lounge and three toilets, including two in passenger lounges and one for disabled personnel. Two elevators are provided, one for passengers and the other for services from Decks 3 and 5.

Crew accommodation includes 15 single-crew cabins with toilet, a mess room and a day room. Catering facilities include a galley with provision for serving area.

No Replies to "MV Legionnaire Arrives in St. John’s"