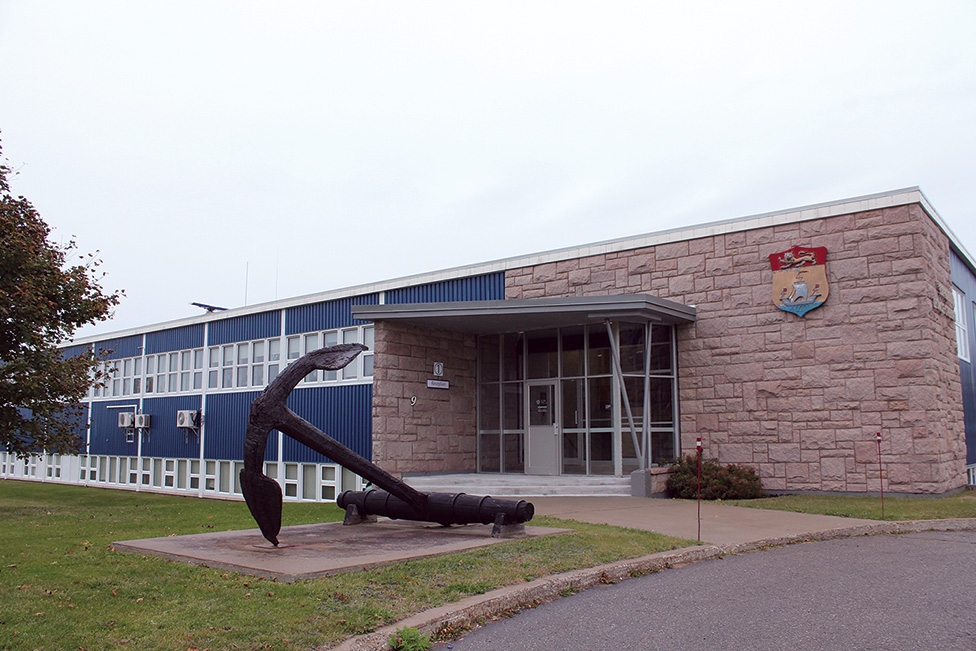 The building the New Brunswick School of Fisheries calls home may look dated from the outside, but the work that goes on in inside its brick walls and beyond certainly isn’t.

Marcel Godin is a coordinator with what is commonly known throughout the province and beyond as the School of Fisheries.

In his corner office, he works on developing and providing courses and training for commercial fishers, courses Godin himself took at the school in the mid-1990s.

This has been the mandate of the school since it opened over 50 years ago. Located in Caraquet, the school overlooks Chaleur Bay and the wharf where the largest crab fleet in the province berths. 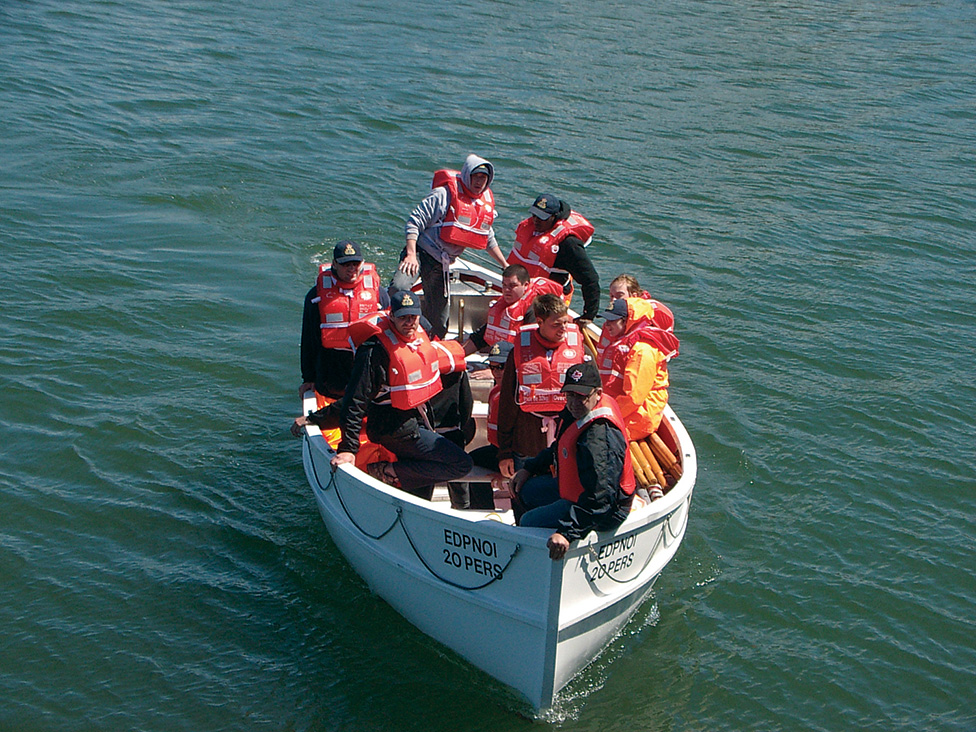 The school had its basic start in 1959 when there was a realization fishermen needed training to move the commercial fishing industry from its traditional methods to ones that were more modern.

Evening classes were offered in the basement of a high school during the winter months. By 1963, the New Brunswick School of Fisheries was built and officially opened by then Premier Louis Robichaud.

“This building was opened on August 17, 1963 and since then we have done a lot of training for the fisheries sector,” Godin said.

This training included learning about navigation, how to make nets, repair those nets and take care of fishing gear. Fishermen could learn to take out the engines on their boats through mechanic courses —some eight weeks, some longer.

Godin said there are courses for deckhands, captains and more. 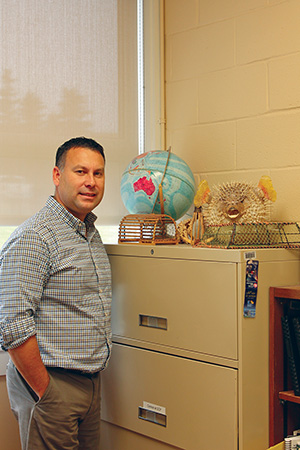 But it has not just been commercial fishermen that have benefited from the school. Programs have been developed to assist fishplants.

“We do training with the fishplant workers and those who do the quality control. As regulations change, we are there to help with the change.”

But the biggest change has been training fishermen and crews in marine safety. The school offers different levels of training in Marine Emergency Duties (MED).

“In MEDs, you have different levels for fishermen, people who want to work on tugs, deckhands and those in the maritime industry.”

A special facility was built not far from the school to offer that training. At that location, students are trained how to deal with various emergency situations, such as fires onboard a boat or a person overboard.

They are also trained on the maintenance of the safety equipment.

The school also has a semi-Olympic-sized pool used to teach cold-water survival skills, a part of the MEDs training.

Many of the courses are approved by the Transportation Safety Board and the Department of Fisheries and Oceans.

A change, but still the same

In 2003, the N.B. School of Fisheries joined the New Brunswick Community College and became a department within the community college. Other courses are now offered in the same building.

“Nothing has changed. We are still here to meet the needs of the commercial fishing industry,” Godin said.

But the rich history of the first four decades of the school of fisheries can be seen throughout the building.

Large black and white framed pictures line the halls. The photos feature graduating classes and students practicing their new skills under the watchful eyes of their instructors.

Small models of the different types of nets fishermen were taught to make are mounted on the wall of the net mending room. Godin says the models were made by a former instructor, “who had such big hands, no one knows how he made them.” 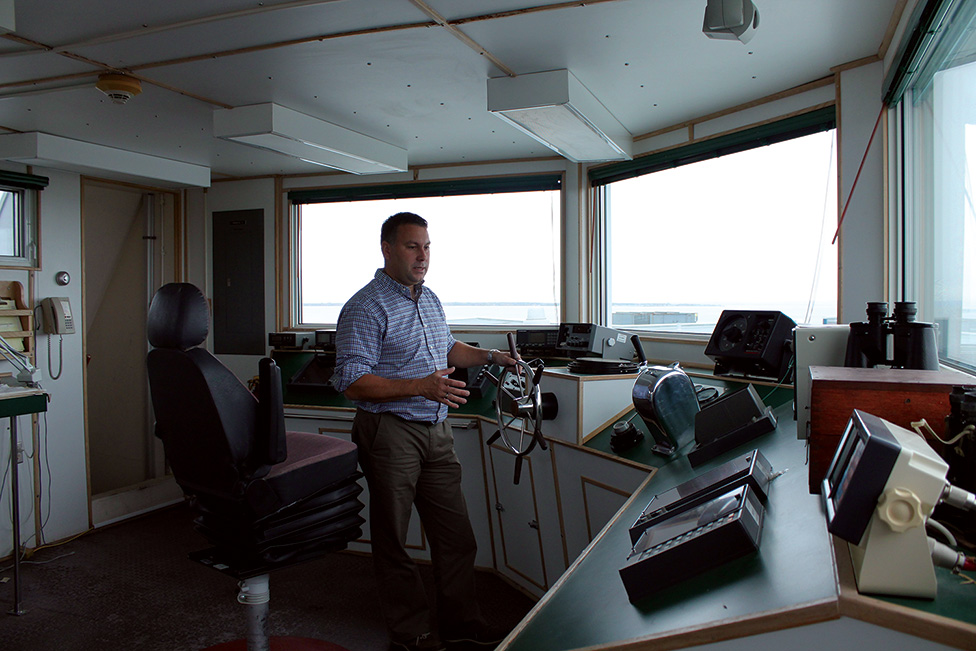 The navigation room looks out over Chaleur Bay. While navigation equipment has modernized with the development of GPS and computers, the navigation simulator offers students the real life scenarios on a boat.

The simulator can recreate situations that fishermen could encounter while fishing. It shows them how to lower fishing gear while operating the boat and watching its direction.

A climb up a ladder into the wheelhouse provides an even clearer view of the bay. Here, students learned to read the weather with radars and navigate using compasses and maps.
They also take a radio communication course to learn how to communicate effectively in an emergency.

In class, students taking the different levels of the fishing master and mariners course have to learn to read maps and do charting.

“After years and years thing change and we have to change with it,” Godin explained. “We meet the needs of the industry.”

While the majority of the courses are offered during the winter months to accommodate the fishing seasons, Godin says training is offered year-round. 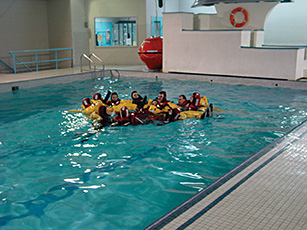 The staff members also take training to the fishermen.

Godin said there are certain courses and techniques that have to be taught at the school but some one-day and two-day courses can be taken on the road.

“If you need basic training, we put all our stuff in a truck and we go across the province to give it,” Godin said.

“If you want the course in French and English, we can do it. We are a bilingual institution.”

That training includes a basic onboard safety course called the Safest Catch Program. The instructors do drills to teach fishermen how to react if there is ever an emergency.

“We push them to think, to look at where they have their safety equipment stored on the boat. Can it be easily accessed in an emergency? They have to think about that.”

Godin says fishermen need to be prepared to think quickly and not panic in those types of situations.

Godin’s family has a long history in fishing that goes back three generations. But it ended with his father who decided to take a buyout package from the Maritime Fishermen’s Union.

Godin had fished lobsters with his father, but also taught part-time at the school of fisheries, beginning in 1995 when there were changes to the employment insurance program.

“I was fishing in the spring, working part-time here in the winter. Then in 2001, I was offered full-time employment after a number of instructors retired.”

Godin kept his hand in the industry for a few more years, fishing with his father and working.

“When you have sea water in your blood, it’s hard to give up.”

Godin still visits his home wharf in Sainte-Marie-Sainte-Raphaël, near Lameque and goes fishing with his friends when he has the chance.

“When you’re a fisherman, it’s always easy to talk to other fishermen. They know you understand.”

The school of fisheries also played a key role in helping native communities become involved in the commercial fishery after the Marshall Decision and community fishing agreements were signed in 2002 and 2003. The Esgenoopetitj First Nation (Burnt Church) was one of the first communities they were asked to work with.

“I think that (program) was a big success because after that things changed a lot. Now there are lots of native fishermen fishing with non-native fishermen.”

Since that time, the school of fisheries has worked with other First Nations communities across New Brunswick to assist with access to the commercial fishery.

The school of fisheries has also provided training in Haiti and Africa.

“We developed partnerships with other schools to assist with this,” Godin noted.

Will the Winds of Change Sweep into the Open-Pen Fish Farming Business?

No Replies to "N.B. School of Fisheries Working to Improve Industry"