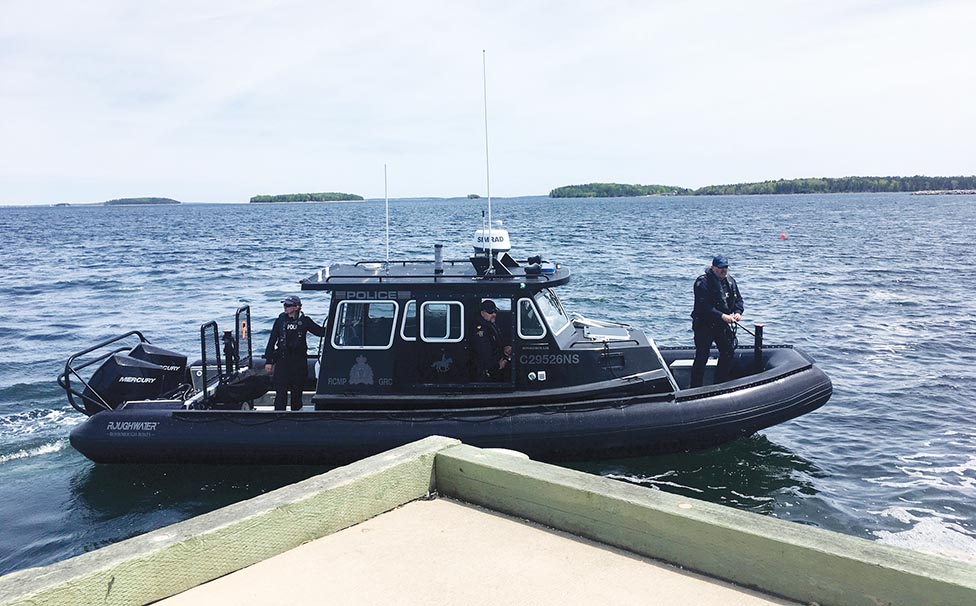 N.S. RCMP’s Newest Vessel Being Put Through its Paces

In its first year of service, the RCMP’s newest patrol vessel in Nova Scotia has been put to good use.

“It almost acts as a makeshift boating office,” said Bishop. “It has all the latest electronics and navigation equipment on it so we’ve got full GPS, radar and depth sounder,” noting the vessel can carry a crew of four comfortably with four air ride shock mitigating seats in the cabin, but is rated for 10 passengers.

Powered by two 250 HP, four stroke outboard motors, the vessel is capable of speeds in excess of 30 knots. With a heated cabin, the vessel can be used year-round if needed.

“It’s very quiet, very powerful and very stable in the water,” said Sgt. Bishop. “It allows the officers to get from point A to point B quickly if needed. The vessel is fully outfitted with police emergency equipment, including lights, sirens, marine radio, police radio and a couple of remote-control search lights.”

The vessel is primarily based out of the Chester, Mahone Bay area, but can be used anywhere in the province if needed, said Sgt. Bishop.

“Chester RCMP has a contractual obligation to provide policing services to the Tancook Islands. In most cases the RCMP can travel to the islands by ferry but in the off hours, the ferry doesn’t run 24/7, this allows the police to respond to call for service on those islands and the islands in the area.”

There’s also a lot of boating traffic in the Mahone Bay area in the summer and a lot of seasonal residents and cottagers. “There’s a lot of water to cover,” said Sgt. Bishop, adding the new vessel “certainly enhances the police’s response down there.”

From general patrol, to enforcement, to on-the-water boating safety education, to whatever is required are among the vessel’s tasks, said Sgt. Bishop. “Its primary role isn’t rescue but if the vessel was on the water it could be used in a rescue if necessary.” 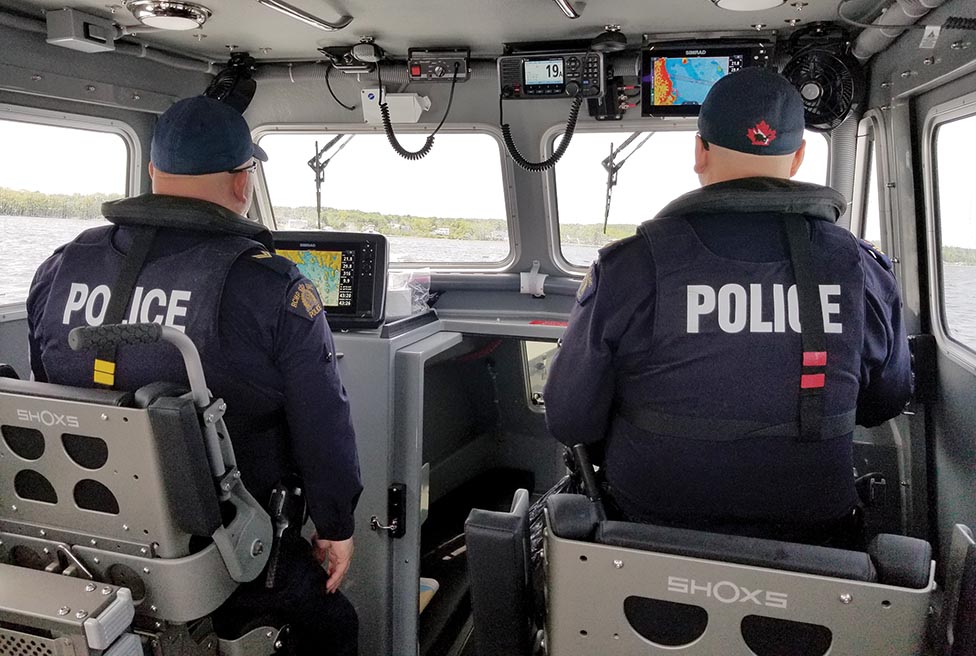 The interior of the cabin on the RCMP’s new patrol vessel stationed in the Lunenburg district. The nine-metre ridged hull inflatable was built by Nova Scotia builders Rosborough Boats. Contributed photo

The RCMP have about 10 water transport or small vessels in H Division (Nova Scotia), said Sgt. Bishop. “Some are specialized like the one the emergency response team uses for their marine operations. We have a couple of underwater recovering team vessels for doing searches on the water. Most of the other ones are used in the detachments or districts for general patrols or response on the water.”

Officers at the helm of the RCMP vessels have advanced training, said Sgt Bishop, starting off with the Small Vessel Operator Proficiency training course and then either the RCMP advanced water transport course or the Canadian Coast Guard Rigid Hull Inflatable Operator Training Course (RHIOT).

“That gives the officers some more advanced training for operating the vessel at night, navigation, radar and GPS. It also trains them to operate the boat in adverse conditions and rough weather, also search patterns and man overboard training.”

Since being put into service, RCMP members have used the boat for approximately 114 hours to conduct patrols on the water throughout the summer, said Cpl. Lisa Croteau, RCMP public information officer.

“Due to COVID-19, there was significantly less traffic on the water in the area compared to other years as events such as the Helly Hansen Chester Race Week were cancelled,” said Cpl. Croteau.

“Since receiving the boat at the beginning of the summer, it has been used to conduct pro-active patrols related to impaired boating and to ensure compliance with safety regulations and small vessel requirements. It has also been used to patrol the Tancook Islands and respond to calls for service there,” said Cpl. Croteau.

“It was redeployed for several days to Saulnierville to maintain safety on the water during the initial fishery demonstrations. Recently, members responded on it to a 911 call from a privately-owned island in Mahone Bay which was determined to be a non-emergency medical situation referred to EHS.”

No Replies to "N.S. RCMP’s Newest Vessel Being Put Through its Paces"