Oil and gas, fish processors, commercial fisheries and aquaculture were just some of the industries represented at the 2014 edition of the North Atlantic Fish and Workboat Show, held November 28-29 at Mile One Centre in St. John’s.

This year’s show marked the fourth biennial edition of this all-encompassing commercial marine event. A broad exhibitor base showcased new and innovative products to 3,177 qualified buyers walking the show floor.

“We heard from many exhibitors that this was a good year for sales,” said Show Manager Shawn Murphy.

“This was an engaged audience, in the market to buy — especially given the diverse array of products featured and special promotions offered at the show.”

As part of the 2014 North Atlantic Fish and Workboat Show, three deserving individuals were inducted into the Atlantic Canada Marine Industries Hall of Fame. These awards pay tribute to those who have made valuable contributions in any sector of the marine industry and are given in three categories: Mariner, Processor and Builder.

The Hall of Fame was established by The Navigator in partnership with Master Promotions Ltd. The purpose of the initiative is to pay a lasting and permanent tribute to those who have made or are making valuable contributions in one of three Hall of Fame categories in any marine field. 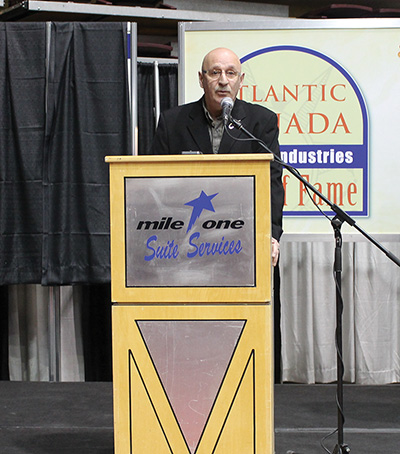 Marcel O’Brien of L’Anse au Loup has had a long and successful career as a fish harvester and innovator particularly in the development of the Labrador fishing industry.

A fisherman in his early years with his older brother Eric, Marcel began his professional career as a marine diesel mechanical engineer with Puddister’s Trading. After graduation from the College of Fisheries in St. John’s in the early 1970s, he went to work with Puddister’s as an engineer on various ferries on the Strait of Belle Isle. This career lasted a few years but the call of the fishery was too strong.

He bought a 55-foot boat in 1979 and embarked on a 35-year career. His first year fishing in 1979 was a gillnetting season, fishing turbot out of St. Anthony and cod from Black Tickle and Smokey, but the prospects were far greater in a newly developing otter trawl fishery in the Gulf. Marcel lobbied government tirelessly and was successful in obtaining an otter trawl license in 1980. This was the first otter trawl license issued and fished by a Labrador-based fisher. Marcel added to his suite of licenses later when he obtained a Gulf shrimp license and became the first inshore shrimp harvester from Labrador fishing out of Port aux Choix.

After completing his Fishing Masters Class 2 in the late 1990s Marcel began instructing for the Marine Institute School of Fisheries as a FM 4 and 3 instructor and continues to do so each year.

He has served as the Labrador District Director for the Canadian Coast Guard Auxiliary and served many years as first vice-president of that organization.

Edgar Simmons was born and raised in Hickman’s Harbour, Trinity Bay. Edgar came from a large family of 12, has seen some difficult times growing up and was a very quiet and shy individual. He started fishing with his father at the age of 14 during the summer and evenings and at the age of 16 he left school to fish full time.

Edgar has owned and operated three fishing enterprises, as well as operated the successful fish processing business Golden Shell Fisheries Ltd. Edgar is a man that likes to keep to himself and does not like to be in the spotlight. He is a very kind, generous and determined person who will fight for what is right.

Edgar has gone through some difficult times in the industry over the years, but his determination has seen him through. All of the licences that the business has obtained were purchased from other plants, with not one given to him by the government. Edgar takes much pride in the fact that he has never received any government assistance for his business and has stood on his own for the past 26 years. At one time, he owned two other fish plants and employed over 400 workers across the province. Today his plant is a multi-species operation, with the exception of shrimp. The business is the largest on Random Island and is a great help to the community. 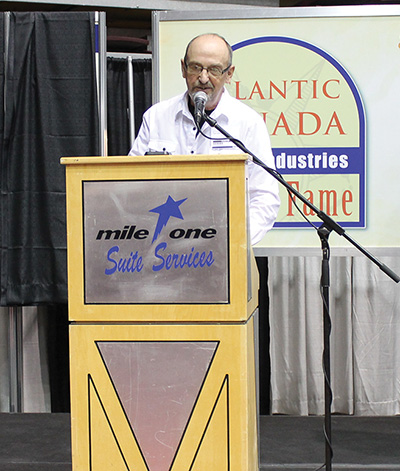 Vallance Cull was born in 1955 in the town of St. Anthony and was raised in the small fishing town of Great Brehat on the Northern Peninsula in a family of 12.

He moved to St. Anthony as a young boy with his family in 1968 where he went to school and started work at the age of 13 at the local fish plant cutting out cod tongues. In the summer of 1972 he went fishing on the Labrador coast on the M.V. Wavey Gay with his father. He always had a great passion for boats. He later met a girl (Jane Hynes) from Port Au Choix, settled and was married and had two daughters, Nadine and Natrisha. There he began working around boat yards with his brother-in-law and father-in-law and his passion to build and improve fishing vessels grew. He started his own company, Northern Boat Building and Repair Ltd., in 1991 and in 1996 leased the Marine Service Centre in Flowers Cove, NL and later that year the Marine Centre in Port Saunders, NL.

In 1999 he purchased the Marine Service Centre in Port Saunders. He then went from wooden boat repair to fibreglass, where he started cutting the vessels and making them larger. His company has employed 32 people for 6-12 month spans for the past 25 years.

He has helped the town grow by employing people who otherwise would have to leave the region for work. He has also helped surrounding businesses by purchasing all his of building supplies locally.

The Marine Service Centre boat yard itself accommodates approximately 90 boats yearly for winter storage and 200 boats for regular yearly maintenance and CSI inspections. Fishing vessels come from all over Canada and as far as the U.S. for his expertise, vessel extensions and maintenance, so the spin offs for the Tri-Town area is great for the local economy.

In 2013 came his greatest accomplishment, as he built his dream vessel The F.V. Atlantic Charger for business owner Brad Watkins. This is the largest vessel built on the west coast at 69 feet long.

At the age of 59, he is looking forward to what the future will bring and the next big endeavour. He believes with proper management in the fishery there will always be a fishery long after he is gone. 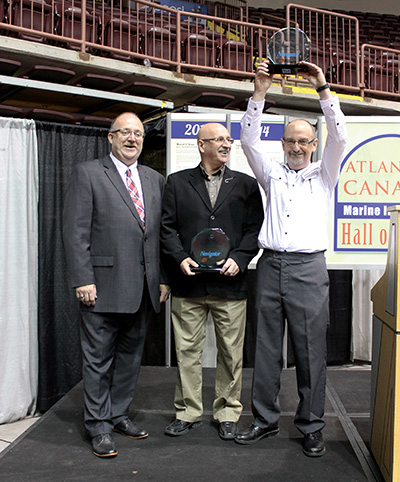 The North Atlantic Fish and Workboat Show owes its success in part to the generous support of its sponsors: TriNav Group, The Navigator, Mermaid Marine, Marindustrial Inc., and Twin Disc.
Next up is the Eastern Canadian Fisheries Exposition in Yarmouth, Nova Scotia, taking place February 6-7, 2015 at the Mariners Centre; visit www.EasternCanadianFisheriesExpo.ca for details.
The next edition of the North Atlantic Fish andWorkboat Show will take place in late 2016. Show dates will be posted online at www.NAFISH.ca once they have been determined.

No Replies to "Another Successful North Atlantic Fish and Workboat Show"