In late February, International Trade Minister Chrystia Freeland said the legal review of the English text of the Canada-European Union Comprehensive Economic and Trade Agreement (CETA) is complete and is expected to come into effect in 2017.

However, there was no word on where things stand with the $400-million joint fund for Newfoundland and Labrador’s fishery.

First proclaimed in October 2013, the fund was to be cost-shared, with the federal government chipping in $280 million and was meant to provide compensation for the forfeiture of minimum processing requirements (MPRs) on seafood by the province, but the deal quickly went south as disagreements arose between Newfoundland and Ottawa over the deal’s actual conditions.

On Feb. 29, Bonavista-Burin-Trinity MP Judy Foote said the province and the federal government are still working on developing the final deal.

GNSFPB to Buy Over 1,000 Personal Flotation Devices for its Members

The Gulf Nova Scotia Fleet Planning Board (GNSFPB) will buy 1,038 personal floatation devices (PFDs) for 519 fishermen — a purchase valued at over $230,000.

The transaction is part of a plan to improve the safety on board the fishing vessels of its members.

“We believe the most important thing is that fishermen return home safely to their families,” said Leonard LeBlanc, GNSFPB secretary/treasurer. “We’re working to change the safety culture in the fishing industry one step and one PFD at a time, and I would like to thank board member Jordan MacDougall for bringing this great idea to the board of directors.”

LeBlanc is a long-time champion for fishing safety in Nova Scotia and was part of the Safe at Sea Alliance, a group that developed Fishing Safety Now, a plan that outlined 33 recommendations to improve fishing safety in the province.

The GNSFPB’s decision to buy PDFs for its members is not part of the Fishing Safety Now initiative but does fit in with the overarching goal of improving safety for the Nova Scotian fishing sector.

“Although this is a separate and independent initiative from Fishing Safety Now, the purchase of these PFDs is the latest example of industry leadership in safety, and of an evolving safety culture in our province,” said Lisa Fitzgerald, executive director, Nova Scotia Fisheries Sector Council.

Construction work on the next phase of the Marine Institute of Memorial University’s Holyrood Marine Base has begun.

RJG Construction, which was awarded the tender in November 2015, is preparing the site for the delivery of rock and timbers for the marginal wharf. Construction of the wharf is scheduled to begin in late March.

The Institute will build a wharf and breakwater on the north side of the base in common with the berths and harbour on the south. The enclosed area will provide protected berthage for small and medium-sized vessels and a sheltered area where clients can continue in-water training and testing in all but the most extreme conditions.

Upon completion of the development, the Institute will relocate all of its at-sea safety and survival training to the Holyrood Marine Base from the Southside Marine Base to take advantage of the environmentally clean waters, sheltered harbour and low-traffic volume. To undertake this move, the Institute will also reconstruct the existing wharf and install various evacuation systems for ocean safety and survival education, training and research.

The company is planning to construct and operate a land-based Recirculation Aquaculture System (RAS) Hatchery for Atlantic Salmon in the Marystown Marine Industrial Park and 11 marine-based farms in Placentia Bay.

The land-based hatchery will produce up to seven million triploid smolt annually, which will be sold to salmonid aquaculture farms in the province and will be developed on approximately 10 hectares of serviced land. The 11 marine-based farms will be located in four Bay Management Areas (BMA): Rushoon BMA, Merasheen BMA, Red Island BMA and Long Harbour BMA.

Each marine-based farm will consist of multiple cages with cage collars at the surface and nets extending down to 43 meters. The Bay Management Areas will occupy 1,958 hectares of which 24 hectares will be occupied by the sea cages. The project is scheduled to commence in April 2016.

New Brunswick Fisheries Minister Rick Doucet recently told the Canadian Press that some New Brunswick lobster plants were so short-staffed last year that thousands of pounds of lobster had to be thrown out.

He said it’s also disappointing to see some companies having to send lobster to neighbouring Maine to be processed.

New Brunswick has 44 active lobster processing facilities and had more than $700 million in export sales of lobster last year, but some plants are already advertising for workers.

Doucet went on to tell CP that he is hoping the federal government will make more people available through the temporary foreign worker program to avoid future lobster losses.

Lunenburg-based High Liner Foods recently announced it will be ceasing its value-added fish operations at its production facility in New Bedford, Massachusetts.

This change does not impact High Liner’s scallop-processing operations, which are also located at the New Bedford facility.

The New Bedford plant is currently the company’s most underutilized manufacturing facility with annual production of approximately 40 million pounds. This production will be transferred to High Liner’s remaining facilities by the end of the third quarter of 2016 and will require it to increase the workforce at those facilities. The value-added fish operation at New Bedford currently employs 35 salaried employees and 167 hourly workers.

The Transportation Safety Board of Canada (TSB) recently announced it has deployed a team of investigators to Pubnico, Nova Scotia, to assess an occurrence involving the fishing vessel Don Cadegan which ran aground and subsequently sank on February 15.

The TSB said the three-person crew was picked up by another fishing vessel and are all safe.

The vessel ran aground near Murder Island, one of the islands in the Tusket Islands chain.

A Transportation Safety Board spokesperson said the TSB would have more details to provide later after its investigators know more about what happened.

New research funding will allow a Memorial University researcher to create the first comprehensive study of the effects of marine plastics pollution in Canada’s North.

“This funding is foundational to creating the basis of a monitoring system for marine plastics in Newfoundland and Labrador and the rest of the Canadian North,” said Liboiron, who is also the Chair in Teaching and Learning in the Faculty of Arts. “Without it, we wouldn’t have a functioning laboratory and we wouldn’t be able to support the exceptional students and partners we’re working with.”

Liboiron and her team of students, researchers, community partners and other organizations are developing and evaluating three approaches for monitoring marine plastics in northern Canada: biological monitoring, citizen science trawls and shoreline sampling for icy and rocky coasts. These methods will assess marine plastic quantities, types and sources to establish the first comprehensive baseline in Canada’s northern waters. 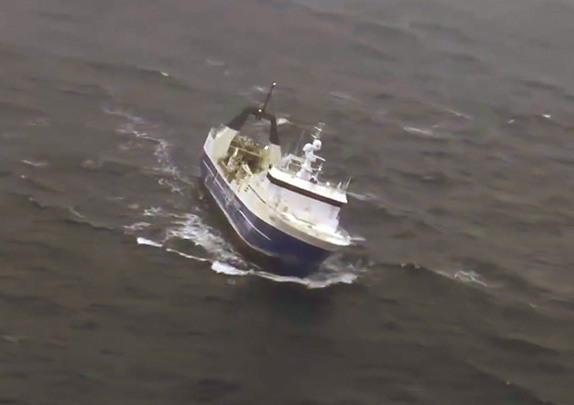 Saputi in Greenland After Taking on Water in Davis Strait

The Newfoundland-based Saputi is now docked in Nuuk, Greenland following a harrowing ordeal about 270 miles northeast of Iqaluit.

On Feb. 21, the 220-foot Qikiqtaaluk Fisheries factory-freezer vessel was in the Davis Strait when it ran into trouble after hitting ice and started taking on water.

The Joint Rescue Co-ordination Centre (JRCC) dispatched a Hercules aircraft that dropped four pumps to help pump water out of the vessel.

A Coast Guard spokesperson said the Saputi was listing and in some distress on its way to Greenland, but noted the skill of its crew and expertise of the crewmembers played a major role in getting the stricken vessel safely to port. The vessel made it to port under its own power. The crew members have since returned home and damage to the ship is being assessed.

Newfoundland and Labrador Fisheries and Aquaculture Minister Steve Crocker has accepted the recommendation of the Fish Processing Licensing Board to approve the fish processing licence change of operator applications related to the purchase of Quin-Sea Fisheries by Royal Greenland.

“Royal Greenland submitted a solid business plan and, after careful consideration, the independent Fish Processing Licensing Board recommended approval of the change of operator applications. After conducting my own due diligence including: meeting with Quin-Sea, Royal Greenland and several other key stakeholders; and reviewing the business plan and purchase and sale agreement, I have accepted the board’s recommendation and approved the change of operator applications allowing the sale to proceed. Royal Greenland brings with it a wealth of experience with onshore fish processing and international marketing and its participation in our processing sector will help diversify our province’s seafood industry,” Crocker explained.

The independent Fish Processing Licensing Board process allowed for public and stakeholder questions and input which the board considered in making its recommendation. In addition to the independent board process, the minister and government officials conducted extensive due diligence relating to this transaction.

Questions and concerns raised publicly, or in submissions to the licensing board and Provincial Government regarding the change of operator applications, were considered by the minister and officials and the applications clearly met all established criteria.

Mikael Thinghuus, Chief Executive Officer, Royal Greenland said “Royal Greenland is committed to investing in Newfoundland and Labrador to transform locally harvested seafood into the highest quality product for our international markets. Our plan is to build upon this well-established, successful business, including operation of its plants and employment of its people. The combination of Quin-Sea’s reputation for species diversification and production of top quality products, and Royal Greenland’s experience in extracting top value for such products, will bring new opportunities to the province.”