The deal was led by Antarctica Advisors LLC, a food industry focused investment banking firm. Financial details of the partnership were not released.

“This is a highly strategic partnership for our clients, East Coast Seafood and Garbo Lobster, and a great entry for SIG into the North American Seafood Industry,” said Ignacio Kleiman, Managing Partner of Antarctica Advisors.

“The new partnership demonstrates the unique opportunities the seafood industry in North America presents to investors, where Antarctica’s highly-specialized Seafood Team continues to play a leading role as a trusted advisor.”

East Coast is one of the world’s top lobster distributors. The company operates a live lobster and seafood facility in Deer Island, New Brunswick. East Coast distributes its live lobster under the Paturel brand to both the U.S. and EU markets. The company expects this investment deal will help expand its market reach across North America.

Provincial officials have been in-country to promote a Canadian lobster festival in Shanghai while also partnering with the province’s Tang Palace to feature sales for Canadian lobster and other seafood products to consumers across the region, SeafoodNews reported.

Andrea Lyon, Canada’s deputy minister of agriculture, visited Shanghai in mid-June in order to promote Nova Scotian lobster. Lyon also participated in the inauguration of the Canadian lobster festival in Shanghai. She was also responsible for authorizing the deal with Tang Palace.

The Chinese market has grown into the second largest destination for Canadian live lobster. Its import volume has tripled during the first three months of this year compared with the same period a year earlier.

Lobster imports from Nova Scotia have particularly benefited from the higher Chinese demand. Reports said 92 per cent of the lobsters served during the Shanghai Spring Festival were from Nova Scotia.

Four fishermen from Tignish were rescued from the waters between Prince Edward Island and New Brunswick last month after their vessel took on water.

The vessel was 154 kilometres east of Shippagan, N.B. and 93 kilometres northeast of Tignish, P.E.I.

A Cormorant helicopter, a Hercules aircraft, a Coast Guard vessel and another fishing vessel in the area responded.

The fishermen were airlifted to the Charlottetown Airport and arrived there by 8 a.m. They were taken to the Queen Elizabeth Hospital in Charlottetown to be checked out.

The investigation into the vessel’s sinking is ongoing.

Lobster fishermen in areas of Prince Edward Island and New Brunswick were granted a four-day extension to their seasons, past the scheduled closure date of July 1.

According to a statement from Canada’s Fishery Minister Gail Shea, fishing in all of P.E.I.’s Gulf lobster fishing areas would be extended four days past the scheduled closure. This included LFAs 23, 24, 26A and 26B.

“This four-day extension strikes the right balance between ensuring we protect our precious resource while allowing our fishermen to get more days out fishing.”

DFO also extended the lobster season four days in the Maritime region, which included areas in the Southern Gulf of St. Lawrence and in LFA 36 in the Bay of Fundy. That fishery was scheduled to shut down on June 29.

“This decision came in response to current requests from industry to extend the season and was based on several factors, namely that this time of year coincides with the moulting and reproduction cycles of lobster,” DFO said in a statement.

The P.E.I. and New Brunswick lobster seasons were delayed by over a week in early May due to lingering ice in the harbours. 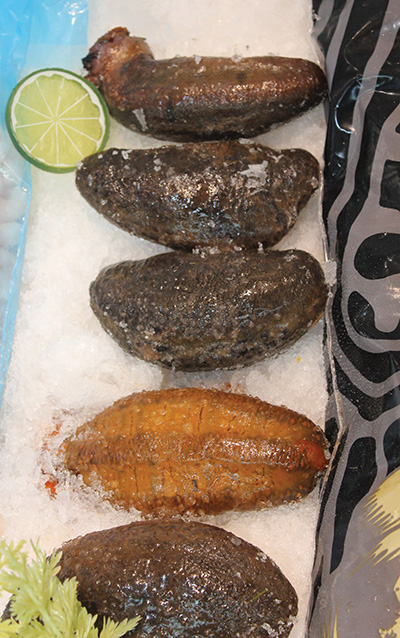 Canadian sea cucumbers, captured in the North Atlantic Ocean off the coast of Nova Scotia, are now finding their way onto Chinese food tables.

Last month at a media conference in Beijing, a deal was announced between Canadian seafood exporter United Trans and Beijing Pharma, a capital-based pharmaceutical company that owns the government-certified online drugs and healthcare products shopping platform in China, Yaofang.com.

Under the agreement, Canadian sea cucumbers will be allowed entry into China as a health product, according to a statement by Beijing Pharma.

“We are very excited about the sea cucumbers getting into the Chinese market,” says Keith Colwell, Nova Scotia minister of agriculture and minister of fisheries and aquaculture. “We have crystal-clear water in North Atlantic Ocean. The sea cucumbers are wild. The environment they grow in is totally natural.”

Although he couldn’t cite the exact numbers, Colwell says the export volume of Canadian sea cucumbers into China has increased exponentially.

At least 30 per cent of last year’s catch was imported to China.

The final piece of the wreck of the MV Miner was removed June 22 from the coast of Scaterie Island, an environmentally protected area near the Cape Breton community of Main-à-Dieu.

“For the first time in a long time, Scaterie Island looks as it should,” said Nova Scotia Transportation and Infrastructure Renewal Minister Geoff MacLellan. “I’d like to thank the Main-à-Dieu Community Association for their support and advocacy on this important project.”

RJ MacIsaac, an Antigonish-based contractor, was awarded the $11.9-million contract to remove the ship. Once work began, an additional 32 tonnes of asbestos and more than 26,000 litres of diesel fuel was removed. The additional cost is still being finalized.

“If the wreck had been left to erode into the ocean, those contaminants would have permanently damaged the fragile and lucrative fishing grounds off the Scaterie coast,” MacLellan said.

The MV Miner was a bulk carrier that ran aground in 2011 off the coast of Scaterie Island. 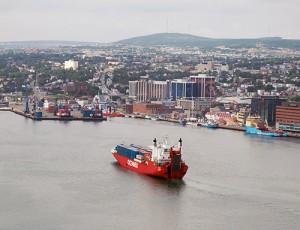 Oceanex recently announced the addition of 125 new, 53-foot marine rated refrigerated containers for the handling of domestic fresh and frozen goods to its existing fleet, an investment in excess of $8 million.

According to executive chairman, Captain Sid Hynes “the addition of the new equipment will increase Oceanex’s capacity for the transportation of fresh and frozen goods from Central Canada to Newfoundland and Labrador by 400 per cent.”

Oceanex has a long history of handling domestic temperature controlled freight to the province and is the primary transportation provider for fish exports bound for international destinations. Working closely with its partners, suppliers, and customers, Oceanex developed a unique 53-foot marine-rated refrigerated container that can handle their fresh and frozen goods destined for Newfoundland and Labrador.

Added to this, to ensure product integrity, Oceanex has invested heavily in its temperature controlled transportation systems, including state of the art temperature monitoring equipment, spare parts inventory, and employee training for servicing the new equipment.

The refrigerated containers are environmentally friendly, designed to operate on electric power at terminals and onboard vessels, which further reduces air emissions and improves the company’s environmental footprint.

For the second time this year, DFO scientists have discovered a new species in the province’s coastal waters, CBC recently reported.

The first Baltic shrimp in North America has been identified along the shores of Newfoundland’s west coast. When scientist Philip Sargent discovered the shrimp four years ago, he and his colleagues thought it was grass shrimp, an inshore species common in Atlantic Canada, but not in Newfoundland.

However, Sargent noticed discrepancies in the shrimp’s spines, claws and head.

Baltic shrimp are common in the eelgrass beds of the Baltic Sea and throughout Europe, spanning from northern Norway to Morocco.

The shrimp are edible and have a substantial fishery in Denmark. In December, DFO discovered a new species of razor clam based on samples collected more than seven years ago near Long Pond, Conception Bay.