The purpose of the congress was to facilitate knowledge exchange, foster collaboration and mobilize support for the viability and sustainability of small-scale fisheries. Considering the COVID-19 global pandemic and recognizing the need to strengthen regional networks and organizations, the 4WSFC will take place in five regions of the world. 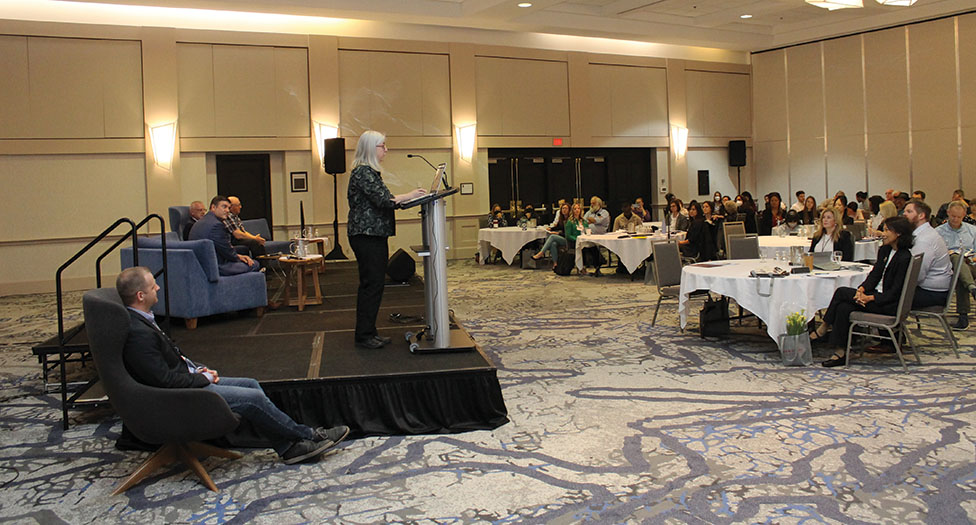 Under the theme Getting IT Right, the St. John’s congress aimed to discuss bold prospects and innovative ideas and strategies needed to address pressing issues for North America’s small-scale fisheries and fisheries and ocean sustainability, set within the context of a changing ocean, the COVID-19 pandemic and climate change, among other challenges.

The 4WSFC North America was co-hosted by Memorial University and OFI Module I, in partnership with TBTI Global and other key organizations.

The 4WSFC coincides with the International Year for Artisanal Fisheries and Aquaculture (IYAFA 2022), declared by the United Nations to recognize the contributions of small-scale fisheries and aquaculture to livelihoods, food and nutritional security, emphasizing the necessity for everyone to take actions to support the sector.

The regional congresses are organized to celebrate IYAFA 2022, as well as to build research and governance capacity and to strengthen local and regional organizations and networks, in order to support the implementation of the Voluntary Guidelines for Securing Sustainable Small-Scale Fisheries in the Context of Food Security and Poverty Eradication (SSF Guidelines).

Clifford Small, Conservative Member of Parliament for Coast of Bays-Central-Notre Dame, recently introduced Bill C-251, the Federal Framework on the Conservation of Fish Stocks and management of Pinnipeds Act, to promote the sustainability of Canada’s fish stocks.

However, the MP’s Bill, aimed at managing seal populations, was voted down during second reading in the the House of Commons on June 15.

Small said Bill C-251 would ensure that conservation and protection of marine ecosystems are built into a new federal framework while opening the door for businesses and Indigenous communities to sell and trade pinniped products.

“Healthy marine stocks ensure a vibrant fisheries economy, and the long-term sustainability of ecosystems and food chains in the ocean,” said M.P. Small. “For too long, Canadians whose livelihoods depend on healthy fish stocks have witnessed the failure of conservation measures to ensure the sustainability of those stocks.”

“This legislation will provide an evidence-based framework to improve marine conservation and ensure the health of marine ecosystems that so many livelihoods on all coasts depend on,” added Small.

As of the end of June, snow crab fishing in the Newfoundland and Labrador region was winding down as about 90 per cent of the quota was caught. 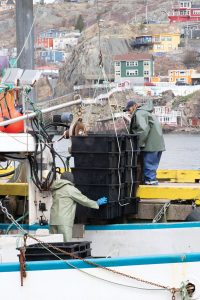 DFO also extended the snow crab season for parts of NAFO Division 3K. Like the areas in 3PS, the fishery was to close on July 7 for the following areas: 3B, 3BC, 3C, 3D and area 4.

The provincially appointed Standing Fish Price Setting Panel, which serves to arbitrate prices in the fishery between harvesters and producers, was in for more criticism after being slammed by the FFAW for a recent shrimp price decision.

Derek Butler, Executive Director of the Association of Seafood Producers (ASP), representing the majority of processors in the province, said in a media release that the Price Panel has rejected an ASP request to reconsider sea cucumber prices.

“We are one month into the sea cucumber fishery and over a month out from the Panel’s price decision for this species. This was a decision that rejected a grading program, in 2022 if you can believe, that said that producers must buy reject, damaged or punctured sea cucumber, and said producers must buy water. That was egregious enough,” says Butler.

But Butler says things were compounded by a decision of the Panel received June 28 which rejected a request to reconsider its May price decision.

“On a market that is evidently lower, producers sought a re-engagement with the FFAW and Price Panel to adjust prices to capture that reality. We met with the FFAW and harvesters last week and basically the message was ‘if you have grounds for a reconsideration, proceed,’” says Butler.

“So, we filed that request, we had market responses from buyers overseas that rejected the pricing we offered based on the Panel’s initial decision and the Panel did not even invite the parties to meet, did not even grant us the courtesy of time to discuss,” says Butler.

Butler says the reconsideration provision in the Panel process has been exercised over 20 times since 2008, but the Panel has rarely rejected a request outright. He says that has only happened once or twice without some provision for a meeting or discussion, and those exceptions like, in one instance, the FFAW seeking a second reconsideration which is not provided for.

“The Panel has its prerogative to not vary its decision, that is clear,” says Butler. “What is unique here, and it has rarely happened, is that the Panel did not even say, ‘well, come in and make the case. We can then decide to vary our initial decision or not.’ The process has always been for the parties to make an initial case in a letter to the Panel, and then to have access to both a meeting between the parties and a hearing.”

Butler says to be shut out without any consideration is a disturbing development in the Panel process.

“These are our businesses, there is a lot on the line here. The courtesy of some additional consideration is the past practice, and frankly it is disappointing that that was not done here.”

It was recently announced that the Canadian Northern Economic Development Agency (CanNor) will be investing over $2.4 million towards three projects which support research, training and marketing.

These projects will continue the progress that’s being made in Nunavut to develop a sustainable, adaptive and inclusive fishing industry.

“Our government understands just how critical the fishing industry is as it provides jobs and sustainable economic development to Nunavummiut.”

Of the $2.4 million, CanNor is contributing $1.2 million to the Nunavut Fisheries Association to monitor stock sustainability and to explore the possibility of adding new species to Nunavut’s commercial fisheries.

Another $1.14 million in funding through CanNor will go to the Government of Nunavut to increase available monitoring data for Greenland halibut and Arctic char. This funding will also provide training for community fishermen to develop small scale fisheries, along with marketing and research for the sealing sector.

Finally, the Nunavut Fisheries and Marine Training Consortium (NFMTC) will receive $100,000 to develop a new strategic plan to improve training for Inuit fishermen through a mentoring program.

“The $1.2 million in support over two years will enable NFA to continue its work to fill the extensive information gaps in our area, all in support of sustainable fisheries development for the benefit of Nunavummiut.”

The Department of Fisheries and Oceans (DFO) recently announced the next steps to transition from open-net pen salmon aquaculture in British Columbia, while establishing Canada as a world leader for the next-generation aquaculture industry.

To grow an industry that remains profitable and sustainable, that also measurably reduces or eliminates environmental impacts on wild fish, the transition must be progressively phased in and predictable, DFO stated.

“In the coming weeks, Fisheries and Oceans Canada will share the draft framework for transitioning from open-net pen salmon aquaculture. The transition plan will rely on input from the Government of British Columbia, First Nations, industry, local governments, stakeholders and British Columbians. Consultations will run until early 2023. The feedback received during these consultations will be instrumental in the development of the final transition plan, expected in spring 2023.”

While the transition is being developed, DFO also announced a two-year renewal of licences for marine finfish aquaculture facilities outside of the Discovery Islands. These licences include stronger requirements for aquaculture facilities, including the implementation of standardized reporting requirements and sea lice management plans, as well as wild salmon monitoring, all of which will improve the management of the salmon aquaculture industry and help protect wild salmon stocks and their habitat.

The decision follows two years of engagement with partners and stakeholders on these new measures. It will allow the industry to continue to operate within the current regulations while the transition plan is being collaboratively developed to define the future of the industry.

Regarding finfish aquaculture facilities in the Discovery Islands and in response to the April 22, 2022 Federal Court decision, DFO will conduct consultations with First Nations communities and current licence holders in the Discovery Islands on the future of salmon aquaculture licences in this area. These consultations will inform a final decision expected in January 2023 after considering input from all affected parties. While this process is underway, DFO will not reissue licences for Atlantic salmon facilities in this area.

Turning the Tide Marine Industry has announced the winners of its fifth annual industry awards.

Richard Cashin was recognized with the Industry Lifetime Achievement Award. He was chosen for his work as a labour leader and politician. His work advanced the rights of inshore fish harvesters and helped harvesters and fish plant workers negotiate fair wages.

The Crow’s Nest, a private club that has operated for 70 years, was presented with the Award of Historical Significance.

The association is a National Historic Site and home to a museum and hundreds of military artifacts.

The Crow’s Nest Military Artifacts Association is recognized as a museum by the Museum Association of Newfoundland and Labrador and a participant in the Virtual Museum of Canada.

The final award, the Next Wave Leadership Award, was given to Jasmine Saunders.

Saunders is an Indigenous woman who has played an integral role in developing relationships with Indigenous partners. She also works with high school students to show them the benefits of the marine industry as a potential career.

The awards will be presented on Sept. 22 at the fifth annual awards gala at the St. John’s Convention Centre.

Oceana Canada took issue with DFO’s decision to maintain the quota for the capelin fishery off the coast of Newfoundland and Labrador (2J3KLPs) at 14,533 tonnes.

“DFO’s decision to leave the fishery open and maintain the harvest quota from last year at 14,533 tonnes ignores the best available science that shows the population is critically depleted. Continued overfishing is a short-sighted decision that undermines the long-term socio-economic value of the fishery and fails to protect the health and abundance of the ocean,” Oceana wrote in a press release.

Oceana said the move to keep the quota maintained was the opposite of how DFO handled management measures for Atlantic herring and mackerel fisheries. Oceana Canada called on the Minister to reverse her decision immediately.

The group shared recent research on the status of capelin, Capelin in Crisis: Urgent Action Needed to Rebuild Abundance, finding capelin to be critically depleted and overfished for more than 30 years.

“Overfishing holds long-term risks for the stability of ocean ecosystems and local economies, and the people of Canada deserve to have a voice on this critical issue,” says Ellie Langford, Head of Communications at Only One.

“Nearly 20,000 people stood up to demand a halt to commercial capelin fishing in Newfoundland and Labrador, and together, we’re calling on DFO to reverse their decision and close the capelin fishery.” 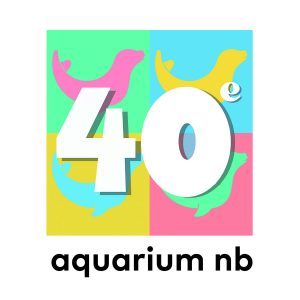 “Congratulations to everyone who has worked hard over the last 40 years to make this Centre the fun and educational experience it is today,” said Agriculture, Aquaculture and Fisheries Minister Margaret Johnson. “I applaud your passion and dedication to raising awareness and promoting the protection of our oceans and aquatic ecosystems.”

Located in the heart of the Acadian Peninsula, the Aquarium is a popular tourist attraction. There are scientists, biologists and technicians at the Marine Centre who are involved in research projects that benefit both developing and mature fisheries and aquaculture sectors.

“We are very excited to offer our visitors many traditional and new activities for them to enjoy this year,” said Laurent Robichaud, Aquarium director. “We are all about offering a chance to live an out-of-the-ordinary experience.”

The Centre is open for the season until Sept. 25.

30 Years Since the Cod Moratorium