This biennial event is a favourite of those who make their living on, in, and around the water, along with those who provide the related products and services to keep Atlantic Canada’s marine-based industries running strong.

Registration is now open for the 2016 edition of the show. For a limited time, visitors can pre-register for just $5 and fast-track their entrance to the show. Convenient online registration is available on the show website: www.FCWC.ca.

Fish Canada Workboat Canada will include a diverse array of exhibitors with representation from local, regional, national, and international companies, appealing to the thousands of industry professionals who attend this key industry event.

At the show, visitors will find a comprehensive assembly of the newest, most innovative products on today’s market, including engines, electronics, equipment for boat builders, and commercial and marine fisheries equipment.

The presentation of the Atlantic Canada Marine Industries Hall of Fame Awards has become a well-known component of this event and the newest group of inductees will be honoured at the 2016 Fish Canada Workboat Canada Show.

Individuals and businesses are encouraged to nominate a person in New Brunswick or Prince Edward Island who deserves special recognition for his/her contributions to the marine industry.

Nominations can be made until Friday, December 18, 2015 in one of three categories:

Visit www.FCWC.ca for the nomination form and additional details on this special recognition, which was developed by The Navigator Magazine in partnership with Master Promotions Ltd., the show’s producer, to pay a lasting tribute to those who have made valuable contributions in any sector of the marine industry.

This new simulator will provide offshore operators with advanced and customized training for the supply and support of offshore facilities and production platforms.

The Hibernia Offshore Operations Simulator is housed at the Institute’s Centre for Marine Simulation (CMS) in a new two-storey facility that was added to the Marine Institute campus this past winter. The facility includes a six degree of freedom motion platform that replicates a wide range of at sea conditions and vessel vibrations, a visualization system to represent offshore operations in real time and an instructor station to co-ordinate and oversee training scenarios.

The construction of the facility was made possible by donations of $4.4 million from the Hibernia Management and Development Company Ltd. (HMDC) and $750,000 from the provincial government’s infrastructure funding program.

Two companies that specialize in advanced marine technology manufacturing and services have expanded their operations to Charlottetown following the announcement of a new program aimed at expanding the sector on Prince Edward Island, says Minister of Economic Development and Tourism Heath MacDonald.

“Our goal is to attract new businesses to the province to grow the economy, expand exports and create jobs for Islanders,” MacDonald said. “When we announced the new advanced marine technology program in the spring, our goal was to see the establishment of a marine technology hub here on Prince Edward Island. The expansion of Breakwater Management Services and Nautican Research and Development Limited in Charlottetown is a small but significant step in that direction. It shows that these two companies see great potential in our province.”

Breakwater Management Services is focused on providing specialized business development and consulting services to an international client base. The company is owned and operated by Paul Jamer, a 30-year veteran of the marine industry, who has extensive experience with government fleets, oil and gas, and renewable energy companies.

The company will be providing consulting services related to business development and targeted sales growth, as well as short term executive placement within this industry. Breakwater will strive to provide world-class products and services that are focused on helping their advanced marine technology sector clients improve safety, reliability and energy efficiency. The company employs two people now with plans to expand to four or more over the coming months.

Nautican Research and Development Limited engineers, designs and manufactures hydrodynamic nozzles, propellers, stators and rudders for the marine industry. Their innovative designs allow ship owners to consume less fuel, achieve more power and have better control of their vessels. Owner Elizabeth Boyd is originally from Eastern Prince Edward Island and is very proud to be able to establish part of her business on P.E.I. Nautican currently has two staff in their Charlottetown office and has plans to grow in early 2016 with a manufacturing presence of three to five employees.

The Newfoundland Town of Burin recently announced it has officially acquired the former High Liner Foods fish plant located in that community.

The acquisition means the building won’t meet the same fate as Ocean Choice International’s fish plant in Marystown, which closed in early 2012 and was demolished this year, town officials explained.

The town council has formed a committee to seek out opportunities for the use of the 60,000-square foot facility — currently valued at more than $3 million.

The Nova Scotia government recently announced that Bay Ferries Limited, majority owned by CEO Mark MacDonald, is the preferred candidate to operate the ferry service from Yarmouth to Maine.

“Staff have been in discussions with Bay Ferries Limited and we are now ready to officially enter into negotiations on contract details,” said Geoff MacLellan, Minister of Transportation and Infrastructure Renewal. “Bay Ferries Limited has the experience, expertise, industry relationships and much of the operational infrastructure already in place, such as a reservations system, that would allow them to hit the ground running. There will be a service out of Yarmouth for 2016.”

Government received four proposals to operate the Yarmouth ferry service. The preferred candidate was selected after evaluating criteria that considered their business proposal, including a marketing and financial plan, along with industry experience.

Details about the contract between government and the operator will be released once negotiations are complete.

A delegation of government and business leaders from Iceland visited Nova Scotia, October 27-28, to promote opportunities for innovation in Nova Scotia’s seafood, aquaculture and biotechnology sectors.

Fisheries and Aquaculture Minister Keith Colwell welcomed the group to Halifax as a follow up to a memorandum of understanding signed in January between provincial Crown corporation Perennia and Matis Limited of Iceland.

The delegation met with representatives of the province’s seafood industry, agricultural producers and the wine industry.

“Iceland has been pursuing innovation through technology and research to grow the value of our biotechnology and agriculture and seafood industries,” said Sigurour Ingi Johannsson, Minister of Fisheries and Agriculture for Iceland. “We see opportunities to collaborate with Nova Scotia to promote development in these sectors.”

The main purpose of the agreement between Perennia and Matis is to strengthen research and development capacity in the areas of fisheries, agriculture, aquaculture, biotechnology and agri-food. It commits both parties to work together on local, national and international projects, share personnel and cross promote services.

A number of Icelandic business leaders were also part of the visiting delegation:

Perennia is a provincially owned agri-food and bio-resource development company with a mission to help farmers, fisher harvesters and food processors be prosperous and profitable. Matis is a government-owned, independent research company in Iceland supporting the food and biotech industries. 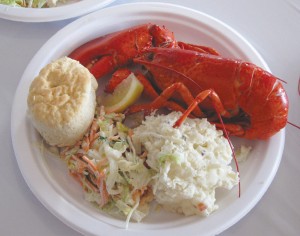 The Marine Stewardship Council has joined forces with the supermarket Lidl to bring New Brunswick lobsters to the U.K. this year.

Alexandra Scholes, Fish and Seafood Buyer for Lidl said “We first introduced Marine Stewardship Council (MSC) products into our stores in 2006 and have continually expanded this range ever since. We are proud to be the first British supermarket to sell MSC assured whole lobster and in addition to this 100 per cent of our fresh ongoing (wild caught) fish is MSC certified and labelled and this range is available in stores all year round.”

Toby Middleton, Programme Director North East Atlantic for the MSC said “Lidl have worked closely with the MSC over the past year to build up their range of MSC certified fish and shellfish.

That hard work is really paying off with 41 of their wild seafood products now MSC labelled, a 24 per cent increase on 2014. It’s a real commitment to demonstrably sustainable sourcing that is providing a benefit to their customers. This lobster is a perfect example, a great value, sustainable product from the cold, pristine waters of Canada. A perfect Christmas treat.” 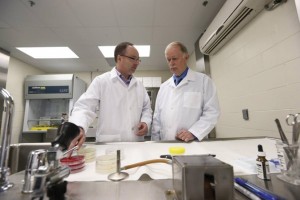 Upgrades to Nova Scotia’s fish health laboratory are an important step in developing a new approach to regulating aquaculture.

Government invested more than $620,000 to improve the lab, located on the Dalhousie University Agricultural Campus. The improvements include an upgraded ventilation system, a new disinfection system for the lab’s waste water, new stainless steel storage cabinetry for equipment and supplies, an additional necropsy table to accommodate larger fish specimens, and a new fume hood for siphoning chemical odours while staff work with samples.

Requirements for fish health reporting at the provincial level will be part of a new approach to regulating aquaculture development. 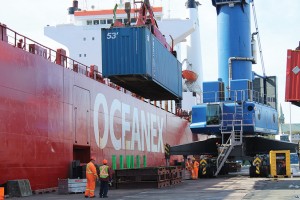 Oceanex recently announced it has placed an order for a new Liebherr mobile harbour crane for its St. John’s terminal.

The new crane will replace the Liebherr crane which was damaged by fire on September 14, 2015.

Executive Chairman, Captain Sid Hynes stated, “At Oceanex we are extremely proud of our ability to offer our customers exceptional on-time performance year over year. To ensure we are able to provide the consistent, reliable service our customers have come to expect, it is absolutely necessary to replace the crane as quickly as possible, particularly before the arrival of the harsher winter weather.”

Hynes explained the company has incurred substantial expense over the past few weeks in its efforts to maintain schedule through added manpower and faster sailing speeds. “Working with one crane places considerable demand on our resources. At Oceanex, our focus is on delivering a safe, efficient service and having the second crane is a critical component” Hynes said.

The crane, valued at almost $6 million, is a new Liebherr mobile harbour crane similar to two other cranes Oceanex had purchased previously from the company.