With exhibit booth space nearly sold out, excitement is mounting for the next edition of Fish Canada Workboat Canada, returning to the Moncton Coliseum Complex on January 26-27, 2018.

This biennial event is Canada’s largest commercial marine trade show. It welcomes those who make their living on, in, and around the water, along with those who provide the related products and services to keep Atlantic Canada’s marine-based industries running.

“This year, Fish Canada Workboat Canada will include tons of the latest products on the market, plus many new, first-time exhibitors from Canada, the United States and Europe.” 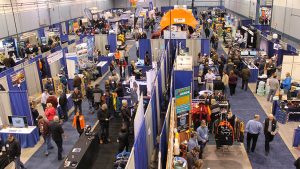 The 2018 edition of the show will also feature several Eastern Canadian boatbuilding companies, and a collection of full-size 45’ and larger fishing vessels will be prominently displayed on the show floor.

Registration for visitors who are planning to attend this key industry event is now open. Convenient online registration is available for only $5 at www.FCWC.ca. Pre-registration lets visitors save money (the price increases to $15 at the door) and fast-track their entrance to the show floor.

Nominations are also now being accepted for the Atlantic Canada Marine Industries Hall of Fame. The newest group of inductees will be honoured at the show.

Individuals and businesses are encouraged to nominate a person in New Brunswick or Prince Edward Island who deserves special recognition for his/her contributions to the marine industry. Nominations can be made in one of three categories:

MARINER (anyone who works or has worked on the water in any marine industry),

PROCESSOR (anyone involved in the business of processing, from line workers to company owners), and

BUILDER (recognizing those who have made contributions without having directly participated, i.e. industry advocates, organizers, boat builders, etc.).

Visit www.FCWC.ca for the nomination form and additional details on this special recognition, which was developed by the Navigator magazine in partnership with Master Promotions Ltd., the show’s producer, to pay a lasting tribute to those who have made valuable contributions in any sector of the marine industry. 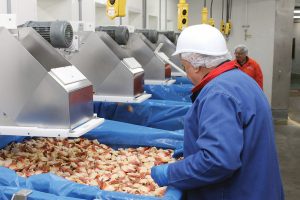 To date, three partnerships involving indigenous groups have been formed to bid on a new and lucrative licence to harvest Arctic surf clams.

A Newfoundland-based partnership between the Miawpukek First Nation, the Innu Nation, the Qalipu First Nation and the Cooke Clam Group recently announced it will be submitting a bid for the fourth licence that DFO will be introducing for Arctic surf clams in 2018.

With the three leaders of the Miawpukek, Innu and Qalipu signing the agreement, they plan to submit the clam licence proposal under the single entity First Nations of Newfoundland and Labrador (FN-NL).

The next indigenous partnership that will be bidding on the licence is made up of 13 Nova Scotia Mi’kmaq bands. This group announced it will be partnering with Clearwater Seafoods, which currently fishes all three of the existing surf clam licences.

The third and most recent partnership announced is between the Innu of Quebec, the Mi’kmaq of New Brunswick, the Southern Inuit of Labrador and Ocean Choice International (OCI).

This partnership said it is also open to accepting another Indigenous group from Nova Scotia and/or P.E.I. This joint proposal is made up of the Innu Band Council of Nutashkuan, Quebec, Nunacor, the economic development company for the NunatuKavut Community Council in Labrador and the Indian Island First Nation, representing the North Shore Micmac District Council of New Brunswick and OCI.

Earlier this year, DFO announced it would give 25 per cent of the current quota to a new entrant, which would have to be an Indigenous entity based in Atlantic Canada or Quebec. The current Grand Banks Arctic surf clam quota is about 38,000 tonnes.

Oceana Canada recently released a comprehensive review of the state of Canada’s fisheries and the first annual assessment of how the government is managing them.

According to the organization, the results revealed that Canadian fisheries are in trouble: only one third of stocks are considered healthy and 13 per cent are in critical condition. Further, the health of 36 per cent can’t be determined because there is insufficient information to properly assess them.

“Fisheries and Oceans Canada reports that there are 19 Canadian marine stocks in critical condition, however we found 26 in our independent analysis using the same sources,” says Dr. Robert Rangeley, Director of Science, Oceana Canada. “What’s more concerning is that there are only three plans in place to rebuild these 26 dangerously depleted populations.” The contrast across Canada’s coasts is stark: 22 of the critical stocks are in Atlantic Canada, only one of which has a rebuilding plan.

“In as little as 10 years, many Canadian fish populations could once again be healthy and thriving, strengthening the economy, sustaining coastal communities and feeding the world’s growing population,” says Josh Laughren, Executive Director, Oceana Canada. “Fisheries and Oceans Canada has identified the steps needed to rebuild Canada’s depleted stocks. Now it needs to implement them.”

The Canadian Centre for Fisheries Innovation will host a two-day conference in Gander on November 28 and 29 on the future cod fishery in Newfoundland and Labrador.

Recognized international experts will come together in Gander to present a comprehensive package of information to help prepare industry for the changes in resources off our coasts. With snow crab and shrimp populations dwindling and groundfish stocks growing, the industry has an opportunity to create a vital, value-driven industry based on cod that will attract people in search of fulfilling and rewarding careers. But, the fishery cannot start where it left off before the fishery moratorium in the early 1990s. Too much has changed since the days when cod was king in Newfoundland. The conference’s objective is to shed light on the status and trends of the resources, the effects of climate change, the global supply of white-flesh fish, cod markets, buying and selling cod products, and profiles of the province’s industry and of seafood-producing industries elsewhere.

According to the Chair of the CCFI Board, Alastair O’Rielly, the conference “should enable participants to reflect upon the presentations, discuss the implications with others in the industry, and develop options for the future fishery.” CCFI expects to hold a follow-up conference where these approaches can be discussed. The ultimate aim of the undertaking is to create a consensus on a future plan for a sustainable, viable fishery.

The registration fee for the event, which is being held in the Quality Hotel and Suites, Gander, is $200. The fee will cover costs for all breaks, lunches and one dinner during the conference.

It is hoped that the conference will attract younger people in the industry, as they will be the principal players in the new fishery when it develops. With that in mind, the Centre can provide some financial assistance to a limited number of young members of the industry. 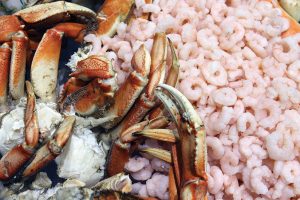 During a recent visit to Japan, Nils Duus Kinnerup, CFO of Royal Greenland, spoke to the fisheries press about his company’s plans to increase its access to both snow crab and Northern shrimp, SeafoodNews.com reported.

The company is actively looking for new acquisitions in Canada, Kinnerup said.

Kinnerup said it was essential for his company to secure raw materials in order to expand sales. He hopes to further boost sales of snow crab to Japan in the coming years.

Approximately 20 per cent to 25 per cent of the group’s sales come from cold water shrimp. It also has a substantial share of snow crab, mackerel and capelin, which are also exported to Japan.

The New Brunswick provincial government recently signed a contract with Ocean New Brunswick Inc. for the construction of a 15-car river ferry, which will be built at the naval centre in Bas-Caraquet.

“Your government understands the importance of economic development and creating jobs,” said Transportation and Infrastructure Minister Bill Fraser. “The construction of the new ferry will provide employment and create significant economic activity in northeastern New Brunswick.”

Ocean New Brunswick Inc. conducts shipbuilding at the centre. The provincial government assumed ownership and management of the naval centre in 2016.

“Since arriving in Bas-Caraquet, we have worked to create high-quality jobs in the region and to develop the expertise capable of taking on contracts such as the one announced today,” said Jacques Tanguay, CEO of Ocean Group. “We are proud that this ferry will be built and used here in New Brunswick.”

In 2015, the Kennebecasis Island ferry was deemed unseaworthy and removed from service. Since then, service has been provided by a rental vessel at a cost of $750,000 annually. The new ferry, which will be added to the provincial fleet and used on a high-volume run, will eliminate the need for a rental vessel, as another ferry in the fleet will be used in Kennebecasis.

The new vessel will cost an estimated $6.5 million and will be put into service next fall. 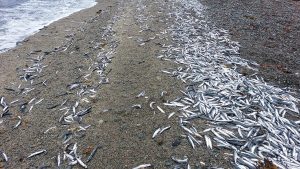 Funding for the project comes from the Coastal Restoration Fund, part of the $3.7-million grant by Fisheries and Oceans Canada that was recently announced. The Ship Cove beach restoration is the first of many WWF-Canada projects to improve coastal habitats and reverse the decline of wildlife in Newfoundland and Labrador.

The beach had prime conditions for capelin spawning, including a freshwater source and the favourable type of gravel close to the shoreline. A decade ago, part of the beach was used as a quarry, and as a result the beach subsided and washed the spawning gravel to the rear of the beach, where it is no longer accessible to capelin for spawning.

Capelin still come to spawn in the summer, but only in a small corner of the beach. WWF-Canada is optimistic that by restoring the beach, capelin will return in greater numbers to spawn successfully as early as next season. Capelin are a vital food source for seabirds and whales, as well as Atlantic cod.

The projects will draw on scientific and traditional knowledge to guide the strategic restoration of coastal habitats.

Partners for the project include: NunatuKavut Community Council, the Marine Institute, the University of Manitoba, Memorial University of Newfoundland, the Newfoundland and Labrador Environmental Association, Inc., the Shorefast Foundation, ACAP Humber Arm and Northeast Avalon ACAP.

More than a decade ago, cod stocks were dwindling dangerously low, prompting fisheries to implement a recovery plan for diminished populations of cod in the North Sea.

The MSC accreditation for British fishing fleets means Britain can maintain sustainable cod stocks and a completely transparent and traceable chain of custody.

Iceland’s mackerel fishery has also received MSC certification. The pelagic species is one of the most valuable to the small country after cod.

Iceland caught 170,516 tonnes of mackerel in 2016, with total catch of mackerel for all nations reaching 1,057,000 tonnes. Fishermen in Iceland use a combination of pelagic trawls, purse seine nets, headlines and bottom trawls to catch mackerel.

Fisheries and Oceans Canada (DFO) recently told CBC that participation numbers in this year’s recreational groundfish fishery were down around 20 per cent over 2016.

DFO speculated that a combination of low catch rates early in the season, lingering sea ice, reports of poor quality fish, rainy and windy weather conditions and reports of blackberry parasites in cod contributed to the drop.

CBC also reported that the number of violations found during patrols also went down over last year — 44 compared to 78 in 2016. A total of 23 charges were laid, along with 19 written warnings and two verbal reminders.

Apply the Precautionary Principle Before it is Too Late