Marine Industry to be Showcased at Moncton Trade Show

For those who make their living on, in and around the water, along with businesses who provide the related products and services to keep Atlantic Canada’s marine industries running, the event takes over the Moncton Coliseum Complex as Canada’s largest commercial marine trade show. The two days provide a key opportunity for members of the commercial marine sector to connect with thousands of qualified buyers. 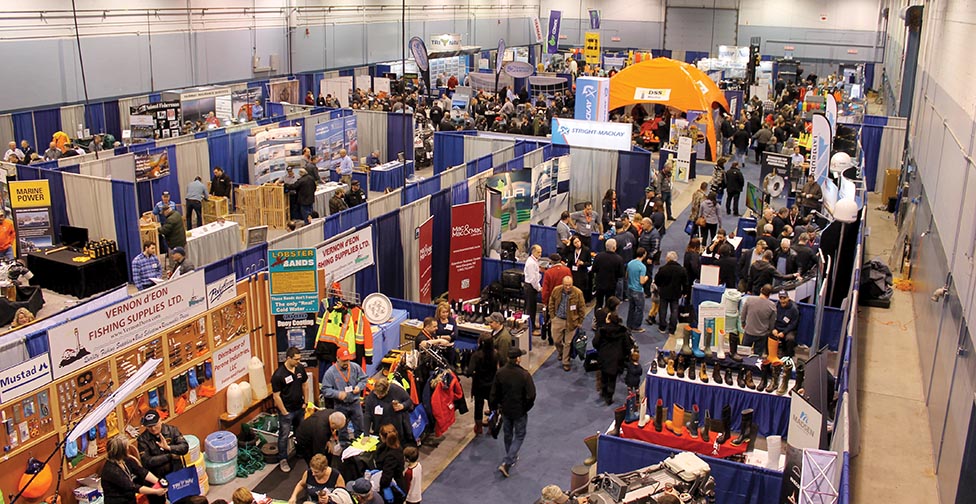 With Moncton as a central location to much of the surrounding coastal regions, Fish Canada Workboat Canada attracts people from the fishing, aquaculture, processing and workboat industries from throughout the Maritimes and Quebec’s Gaspé Peninsula. The last edition, held in January 2018, was marked as the busiest in the event’s history. A record 6,659 visitors took to the show floor and exhibit space was expanded — and completely sold out.

“Booth spaces for this year are going quickly and already more than 85 per cent of the floor has been sold,” said Shawn Murphy, Show Manager.

“Our portfolio of fishing shows, including those in Nova Scotia and Newfoundland and Labrador, have seen great success over the past few years. Exhibit sales are once again very strong with an even larger floor plan, so it seems there’s no slowing down for 2020. We’re looking forward to welcoming everyone back to Moncton.”

Nominations are also being accepted until November 15, 2019 for the Atlantic Canada Marine Industries Hall of Fame. The newest group of inductees will be honoured at the show, in categories for mariner, processor and builder.

A total of $1.5 million over five years has been set aside for the establishment of this safety sector council. Included in the announcement is a sub-committee that will address the specific concerns of the seafood processing industry.

“FFAW-Unifor has long advocated for a safety sector council for processing workers and we are very pleased with today’s announcement,” says FFAW-Unifor President Keith Sullivan.

“Processing workers face unique safety challenges in their workplaces. Having a safety sector council that will address those concerns will be paramount in reducing the high rates of injury and lost time in this industry,” says Sullivan.

“This announcement has been a long time coming for plant workers. It has been a constant challenge to have our employers make changes and accept responsibility for the health of their workers. We are hopeful this new safety sector council will make our workplaces a safer place to be,” says Doretta Strickland, Vice-President of FFAW-Unifor’s Industrial-Retail-Offshore sector and plant worker at Ocean Choice International in Triton.

“We look forward to participating in this new safety sector council and are hopeful it will mean safer workplaces for the people of our province,” concludes Sullivan.

The PC Opposition says people in Newfoundland and Labrador’s shipbuilding industry are wondering if they will have the opportunity to get work building the new ferries for the south coast of the island.

A Request for Proposals for the service closed on Friday, Oct. 25. Concern has been raised that the RFP could exclude some local enterprises from the work.

PC Transportation and Works critic Barry Petten said, “There are people in the province with the expertise to build these ferries, and others who could serve as suppliers. They need the work and they’re wondering if they will have the opportunity or be shut out.”

PC Industry critic Lloyd Parrott said one of the shipyards capable of doing work on this project is next door to the Transportation and Works minister’s district, so he ought to be well aware of their capabilities and their need for work.

The Public Procurement Act and regulations allow the government to make exemptions in favour of local enterprises when doing so is in the best interests of the province.

Petten said, “Newfoundland and Labrador is leading the entire country in unemployment, bankruptcies and population decline — all signs that our economy is in dismal shape. If ever an argument could be made that it is in the best interest of the economic development of the province to maximize local benefits from public procurement, it is now. If the government is interested in building our economy, it should be looking to maximize local benefits.”

The Marine Stewardship Council’s (MSC) Peer Review College has compiled a shortlist of potential reviewers to undertake the peer review for the Maritime Canada inshore lobster trap fishery which is in its first reassessment process with the Conformity Assessment Body SAI Global.

Interested stakeholders are encouraged to submit comments on potential conflicts of interest of the shortlisted reviewers with the fishery to the Peer Review College.

Two peer reviewers will be selected from the following list:

Dr. Gonzalo Macho: He has a background as a marine ecology and fishery scientist (1998–ongoing), as a fishery practitioner on shellfish resources (bivalves, echinoderms, crustaceans and algae) for a Fisher’s Guild and the Regional Fisheries Authority of Galicia, Spain (2007–2008), and as an independent consultant in fisheries and marine ecology (2011–ongoing). He holds a BSc (1997), MSc (2000) and a PhD (2006) in Marine Sciences from the University of Vigo (Spain) and has done postdoctoral research (2008–2015) at the University of Washington (Seattle, USA), CENPAT-CONICET (Puerto Madryn, Argentina) and the University of South Carolina (Columbia, USA).

Dr. Johan Groeneveld: He has over 20 years’ experience as a fisheries scientist, with a focus on marine fisheries and their impacts on target and bycatch species. He obtained a PhD in 2001 at the University of Cape Town in South Africa and is presently a Senior Scientist at the Oceanographic Research Institute (ORI) and an Honorary Associate Professor at the University of KwaZulu Natal. His experience-base includes 12 years of applied fisheries research and management of commercial spiny lobster fisheries in South Africa, two years as an advisor to the fisheries ministry in Oman, and nine years as a senior scientist at ORI, with a portfolio targeting regional fisheries research and development projects.

Dr. Julian Addison: He is an independent fisheries consultant with 30 years’ experience of stock assessment and provision of management advice on shellfish fisheries, and a background of scientific research on shellfish biology and population dynamics and inshore fisheries. Until December 2010 he worked at the Centre for Environment, Fisheries and Aquaculture Science (Cefas) in Lowestoft, England where he was Senior Shellfish Advisor to Government policy makers, which involved working closely with marine managers, legislators and stakeholders, Government Statutory Nature Conservation Organisations and environmental NGOs. He has also worked as a visiting scientist at DFO in Halifax, Nova Scotia and at NMFS in Woods Hole, Massachusetts where he experienced shellfish management approaches in North America. For four years he was a member of the Scientific Committee and the U.K. delegation to the International Whaling Commission providing scientific advice to the U.K. Commissioner.

Harvesters were recently advised that the season for the 2J3KL cod stewardship fishery would be extended to 1800 hours, November 30, 2019.

Landings for the period up to and including October 27, 2019 were 9,869 tonnes, which is 80 per cent of the maximum authorized harvest amount.

The Department of Fisheries and Oceans (DFO) said it would continue to monitor landings and if the maximum harvest amount is reached, the fishery will close at that time.

The closure will be communicated to harvesters via a Notice to Fishers.

Government Investment in Port of Belledune

The New Brunswick provincial government is investing $7 million to increase capacity at the Port of Belledune.

“Our investment will allow the port to improve terminal operations so greater volumes of bulk cargo can be stored and then exported to international markets,” said Premier Blaine Higgs.

“The port has embraced its role as an economic catalyst for the region and will continue to inform and work with those in the communities around the port in order to best benefit all stakeholders,” said Denis Caron, CEO of the Belledune Port Authority. “We are pleased with the provincial government’s support as the expansion project will benefit our operations.”

The investment is part of a $21-million project that will fill in the water gap between Terminals 3 and 4 to enlarge the berth by 15,000 square-metres (3.7 acres). This will improve the port’s ability to move cargo between terminals, and to and from ships. The work will also create additional space for commodities on Terminal 4.

“The last time we looked at the port’s economic impact was 2014 and over four years, the jobs supported by the port’s activity grew by more than 1,000,” said Caron. “The port now supports a total of 3,058 direct, induced and indirect jobs in New Brunswick. With more commodities flowing through the port, these numbers will grow.”

As of 2018, 24 different products were shipped through the port.

Funding will consist of a $5-million grant and a loan of up to $2-million under the Northern New Brunswick Economic Development and Innovation Fund.

Agriculture, Aquaculture and Fisheries Minister Ross Wetmore led a delegation of 12 New Brunswick companies on a seafood trade mission to Asia from Oct. 24 to Nov. 1.

“New Brunswick seafood exports to Asia have increased tremendously over the past few years,” said Wetmore. “To continue this growth, we must energize the private sector. Together with New Brunswick seafood companies, this can be achieved by continuing to produce high quality and sustainable products and by securing new markets.”

In South Korea, multiple activities were planned between Oct. 24 and 27 with the highlight being the launch of Canadian Food Promotion Month at Viking’s Wharf Restaurant. During this period, the restaurant offered premium seafood from New Brunswick.

Following the South Korean seafood promotional events, the delegation attended the China Fisheries and Seafood Expo in Qingdao, from Oct. 30 to Nov. 1.

The seafood industry is a major contributor to the provincial economy. The province is ranked the second largest exporter of seafood in Canada with export sales totaling $1.7 billion in 2018.

An energized private sector is one of the government’s key priorities. More details on the priorities is available online. 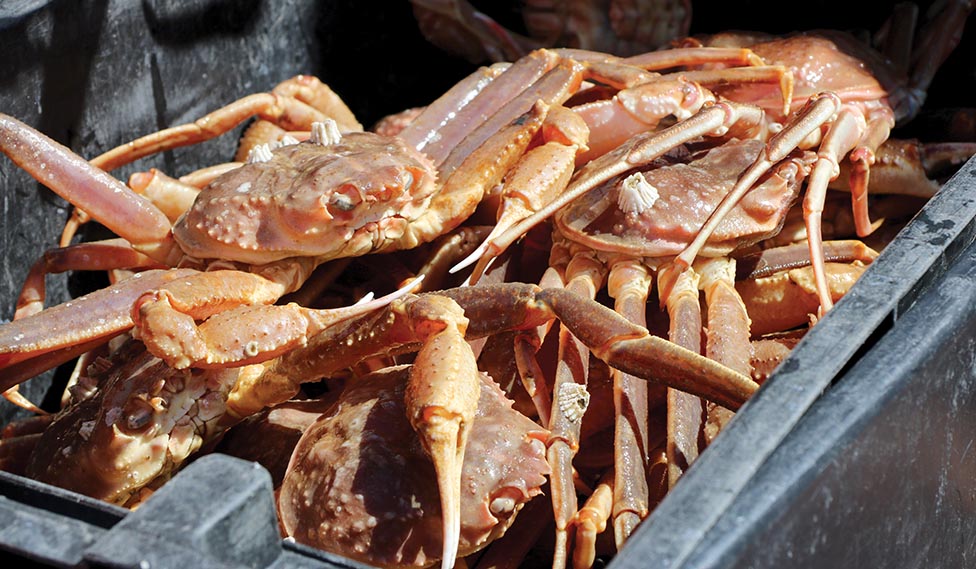 Fishery managers announced a total harvest of just under 3.8-million pounds of mature red king male crabs, the only ones that can be retained for sale — a drop of half a million pounds from 2018.

However, the snow crab total catch was increased to nearly 34-million pounds, a 24 per cent boost over last season. Some fishermen had hoped for more after surveys last year showed one of the biggest crab recruitments ever. Researchers said this year showed a smaller increase in mature males along with declines of juvenile crab and all ages of females.