The Alaska Department of Fish and Game (ADF&G) recently announced that the Bristol Bay Red King Crab (BBRKC) season will be closed in the Bering Sea for the second consecutive year, as well as the first closing for the Bering Sea snow crab season since the inception of the North Pacific Council.

Both were closed due to conservation concerns due to the Bering Sea being warmer and more acidic than ever before. These conditions have caused a 90 per cent drop in snow crab stocks between 2019 and 2021. 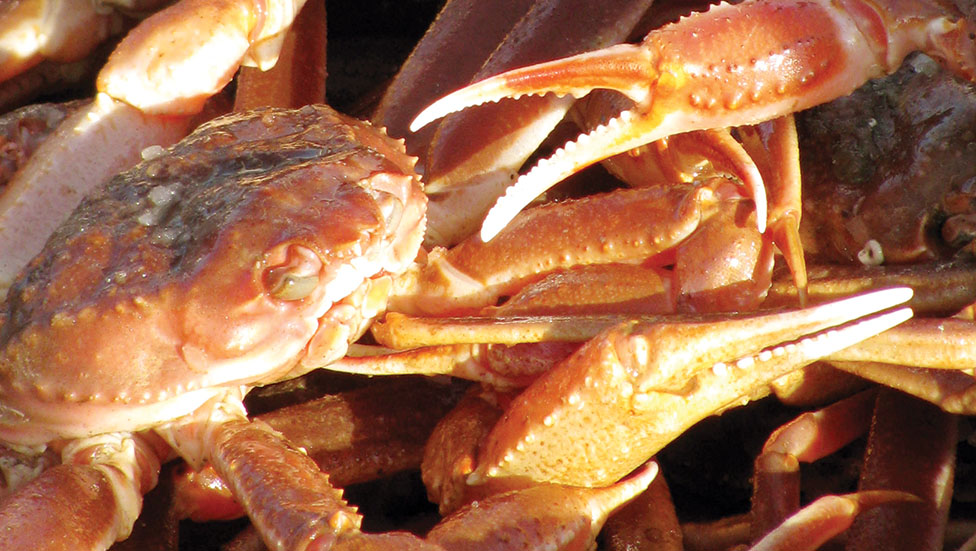 While there was no ocean survey done in 2020 due to COVID-19, over 36 million pounds of snow crab were harvested that year. By 2021, the total allowable catch (TAC) was lowered drastically to five million pounds. Even at such a small TAC, the fleet had a hard time harvesting that amount.

The reason for the decline in snow crab is still unknown, but hypotheses include disease, stress, climate change and predation by Pacific cod on juvenile snow crab. Others think they may have just moved away from the area. BBRKC, on the other hand, have been in steady decline for the last 15 years.

The deputy commissioner of ADF&G, Rachel Baker, has identified both stocks as a priority conservation concern. Her motion, which passed unanimously, encouraged research and testing to reduce unintended mortality on both stocks.

Seaward Enterprises Association of Newfoundland and Labrador (SEA-NL) has commended the inclusion of Coast of Bays-Central-Notre Dame Member of Parliament Clifford Small as the shadow cabinet Minister of Fisheries and Oceans and the Canadian Coast Guard under the newly elected Conservative Party leader, Pierre Poilievre.

Originally from Wild Cove, White Bay, N.L., Small is the son of an inshore fisherman and a former skipper. Before being elected as an MP, he fished snow crab, Northern shrimp and seals.

“What better MP to hold the Government of Canada to account for better fishery policy, science, and search and rescue than a former fisherman who can relate from the deck of a boat,” said Ryan Cleary, SEA-NL’s Executive Director.

Small will go head-to-head in the House of Commons with Department of Fisheries and Oceans Minister Joyce Murray, of the British Columbia riding of Vancouver Quadra.

The meeting began with Murray recognizing the damages of post-tropical storm Fiona, wherein she requested that DFO be kept up to date on the loss inventory process with harvesters and FFAW.

In a press release, the FFAW said it argued that despite DFO’s decision to shut down the 2022 commercial mackerel fishery, harvesters have observed a high level of mackerel in Newfoundland and Labrador waters. Murray indicated that DFO wishes to establish in spring 2023 whether the stock is moving and congregating because of changes in water temperature and whether harvesters’ observations are a local phenomenon.

The FFAW highlighted the work put into the experimental Unit 1 redfish fishery to develop sustainable harvesting methods. It noted that the new fishery represents a considerable economic opportunity for the province, especially as a transitionary method for the 4R fleet that is struggling with cuts to shrimp quotas. Murray said a decision will be made in the coming weeks, and that an in-person meeting should be set up during her visit to the province in early November.

The union also highlighted to DFO its concerns over the Monterey Bay Aquarium Seafood Watch’s “red listing” of lobster and snow crab, noting that the listing is not evidence-based because the fisheries do not occur near right whales. Both parties decided more information is required and that DFO will make the case for a fair and reasonable approach with the proper certification bodies.

Lastly, FFAW stated that the policies not allowing fish processing companies to own inshore fishing licenses are important for the future of the inshore fishery. Murray assured that DFO remains dedicated to the owner-operator legislation put in place and that they are looking to strengthen the policy.

Final remarks centred around a seal summit hosted by Murray in St. John’s on November 8 and 9 at the Delta hotel. FFAW recommended the summit be focused on ecosystem-based management and empirical data on seal populations, predation diet, migration patterns and interactions between seals and other species.

Ocean Trout Canada (OTC), a steelhead trout hatchery and farming company operating out of Nova Scotia, Newfoundland and Labrador, and New Brunswick, has signed a “letter of intent to develop a steelhead trout broodstock program with the Huntsman Marine Science Centre.

According to OTC, the initiative will comprise the design and oversight of a breeding program built to focus on performance objectives such as growth rates, specific climate conditions and other attributes that affect quality.

OTC believes this to be the first steelhead-focused genetics development program in Atlantic Canada, reflecting what they consider to be their commitment to the region.

The Hunstman is a private not-for-profit organization that provides Atlantic Canada’s only commercial aquatic animal broodstock programs for aquaculture companies.

Derek Butler, the executive director of the Association of Seafood Producers (ASP) is leaving the organization after 19 years in the lead role.

The move, to be made effective in the coming weeks, is preluding a “new adventure” in the industry according to Butler  —  the details of which are forthcoming.

“Working with ASP has been the honour of a lifetime,” said Butler. “There have been some great challenges, and it will always be a difficult industry, but it is dynamic, and it is the people that make it so. I will always be grateful for the relationships built and friendships made in the industry, with stakeholders, in government and elsewhere.”

In his leadership role at ASP, Butler has been responsible for public policy, government and media relations, and leading negotiations for raw material prices on behalf of members. According to Butler, in his time with ASP he has led close to 200 negotiations and written over 100 arbitration letters.

Butler said he is confident that a new leader that can lead ASP into the future will step forward.

According to the MSC, the group has completed its “most extensive review of marine science and fisheries best practice ever undertaken by the organization.”

Updates to its new standard includes a new definition and greater protections for endangered, threatened and protected species. New policies also ensure that certified fisheries are not engaging in shark finning and that great responsibility is put on the fisheries to reduce the impact of lost fishing gear.

“The launch of the new standard comes at a time when the critical and urgent need to end overfishing while feeding a growing global population has never been more profound,” said MSC CEO Rupert Howes.

There are over 530 fisheries currently certified to the MSC standard, accounting for 15 per cent of the global wild catch.

The Canadian Coast Guard recently welcomed the CCGS Chignecto Bay into its fleet at the search and rescue station in Port Bickerton, Nova Scotia.

The CCGS Chignecto Bay is the twelfth of 20 new search and rescue lifeboats acquired by the Canadian Coast Guard. All of the newly acquired vessels are named after geographical bays across Canada. 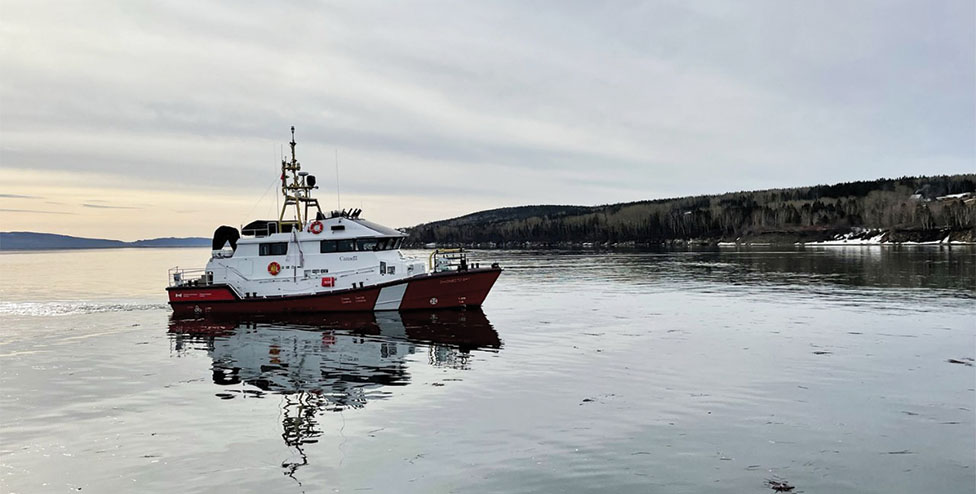 These vessels will operate up to 100 nautical miles from the shore and maintain a maximum 30-minute state of readiness. However, they are usually ready to respond as soon as an alert is received. The new additions to the Coast Guard fleet are being stationed across the country to provide search and rescue services such as searches on the water, responding to marine distress responses, and assisting disabled vessels.

The Canadian Government and the Province of Nova Scotia have partnered to provide funding of more than $400,000 to the Maritime Fishermen’s Union (MFU) Nova Scotia members.

The funding, provided as a part of the $400 million Atlantic Fisheries Fund, is meant to help the MFU provide its member’s vessels with canopy extensions to create more shade, lobster sorting tables and automatic lobster banders. Live-well systems will also be provided, which measure water quality.

These upgrades are meant to increase the quality and value of harvested lobster in the funded areas, as well as create a more efficient and safe work environment onboard the upgraded vessels.

“We are pleased to be able to offer this funding help to our members,” said Gordon Beaton, vice president of Nova Scotia MFU. “We will work diligently with the funders and our membership to ensure that every N.S. member has access to the funds in order to improve lobster quality.”

Fish harvesters and aquaculturists in Prince Edward Island that have experienced damage and losses due to Hurricane Fiona can apply for financial assistance and clean-up assistance through the province’s Provincial Disaster Financial Assistance Program (PDFAP).

Fishery and aquaculture operators with revenues of $2 million or less that employ no more than the equivalent of 20 full-time employees can apply to the PDFAP for losses that are not covered by insurance. These include repairing damaged or lost gear and equipment, replacing and repairing outbuildings such as bait sheds, replacing or repairing business equipment and inventories, clean-up costs and labour costs for clean-up and inventory transportation.

“As a province, we have worked hard with our federal partners to ensure that the provincial disaster financial assistance program will cover some of the costs to our commercial fishery and aquaculture industries,” said Jamie Fox, P.E.I.’s Minister of Fisheries and Communities.

The Department of Fisheries and Communities and the Department of Fisheries and Oceans (DFO) have designed damage assessment surveys to help the levels of government understand the long-term impacts of Hurricane Fiona. The results will be used to design appropriate support programs in the future. All seafood industry members in P.E.I. will receive surveys from their respective associations.

Price Negotiations Process is Skewed in Favour of Processing Companies