Dominic LeBlanc, Minister of Fisheries, Oceans and the Canadian Coast Guard, recently announced the creation of an Inshore Rescue Boat station in Rankin Inlet, Nunavut which will provide seasonal search and rescue capabilities in that region.

Establishing this new station is a step towards building stronger working relationships with northern communities, and is an important indicator for how Coast Guard services will be delivered in the Arctic.

The station will be operated by Indigenous students from Arctic communities, initially under the leadership of an experienced Coast Guard officer until the crews have gotten enough experience to operate without a supervisor. Crew members will undergo initial training alongside their southern-station counterparts in Ontario. This initial training will include Canada’s national search and rescue system, search patterns, boat handling, marine first aid and radio communication.

Members of the Coast Guard were in Nunavut, the Northwest Territories and the Nunavik region of Quebec in October to engage with community members and interested candidates about the requirements of the job and to encourage eligible candidates to apply.

Input was received from local governments and community leaders on the choice of Rankin Inlet as the location for the station, and the Government of Canada will continue to involve partners and stakeholders as the construction plans for the permanent station building progress.

The Newfoundland and Labrador Government recently released the draft environmental assessment for the Grieg Aquaculture Project in Placentia Bay to the public for viewing.

Last November, government announced that Grieg NL Nurseries and Grieg NL Seafarms would have to provide an environmental impact statement (EIS) as part of their environmental assessment.

A committee has prepared a draft of the guidelines that will be followed during the EIS.

Grieg is planning to construct and operate a land-based recirculation aquaculture system (RAS) hatchery for Atlantic salmon in the Marystown Marine Industrial Park and 11 marine-based farms in Placentia Bay.

The land-based hatchery will produce up to seven million triploid smolt annually, which will be sold to salmonid aquaculture farms in the province and will be developed on approximately 10 hectares of serviced land. The 11 marine-based farms will be located in four Bay Management Areas (BMA): Rushoon BMA, Merasheen BMA, Red Island BMA and Long Harbour BMA. Each marine-based farm will consist of multiple cages with cage collars at the surface and nets extending down to 43 meters. The Bay Management Areas will occupy 1,958 hectares of which 24 hectares will be occupied by the sea cages. The project was originally scheduled to commence in April 2016. 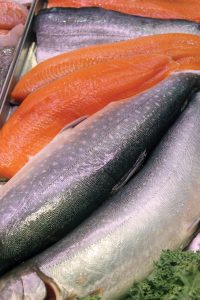 Northern Harvest is fully integrated with its own broodstock, smolt/hatchery, farming sites and processing operations. The acquisition supports Marine Harvest’s long-term strategy of being a world leading and integrated producer of seafood proteins, the company said in a press release.

The acquisition price on a cash and debt free basis is $315 million and the intention is that the consideration will be paid in cash using available credit lines under Marine Harvest’s existing revolving credit facility. 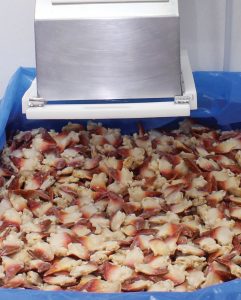 The 2018 total allowable catch (TAC) for Arctic surf clams was recently released by the Advisory Committee.

For 2018, there was no new science advice for the Grand Banks and as a result, the existing TAC of 14,756 tonnes will be rolled over for this year.

Based on the current science advice for Banquereau, the Minister of Fisheries has decided to establish a TAC of 20,943 tonnes for Banquereau Bank.

Given this TAC decision, 75 per cent of the established TAC will be issued and the remaining 25 per cent set aside for a new participant in this fishery.

On December 21, Dominic LeBlanc, Minister of Fisheries, Oceans and the Canadian Coast Guard, announced the establishment of seven new marine refuges that will contribute an additional 145,598km2 of protected ocean area to Canada’s coasts.

This represents an additional 2.53 per cent of protected ocean, bringing Canada’s current total to 7.75 per cent.

These following marine refuges will make a lasting contribution to marine conservation in Canada:

The Davis Strait marine refuge off the coast of Nunavut will conserve significant concentrations of corals, sea pens and sponges. It will prohibit all bottom-contact fishing activities (where fishing gears are designed to come into contact with the seafloor).

The Disko Fan marine refuge off the coast of Nunavut will conserve significant concentrations of coral and minimize impacts on food sources in a habitat used by narwhal during the winter. It will prohibit all bottom-contact fishing activities.

The Hatton Basin marine refuge is located off the coasts of Nunavut and Newfoundland and Labrador. It will conserve significant concentrations of corals and sponges. It will prohibit all bottom-contact fishing activities.

The Hopedale Saddle marine refuge off the coast of Newfoundland and Labrador will contribute to long-term conservation of biodiversity by protecting corals and sponges. It will prohibit all bottom-contact fishing activities.

The Hawke Channel marine refuge off the coast of Newfoundland and Labrador will conserve seafloor habitat important to Atlantic cod. It will prohibit bottom trawl, gillnet and longline fishing activities.

The Funk Island Deep marine refuge off the coast of Newfoundland and Labrador will conserve seafloor habitat important to Atlantic cod. It will prohibit bottom trawl, gillnet and longline fishing activities.

The Northeast Newfoundland Slope (formerly known as Tobin’s Point) marine refuge off the coast of Newfoundland and Labrador will contribute to long-term conservation of biodiversity by protecting corals and sponges. It will prohibit all bottom contact fishing activities.

Earlier this year, LeBlanc announced that Canada will establish a national advisory panel that will provide the Minister of Fisheries, Oceans and the Canadian Coast Guard with advice on minimum standards of protection within future Marine Protected Areas in Canada’s waters. He also highlighted the leadership role Canada is taking internationally on marine conservation and protection, particularly on the scientific criteria for other effective area-based conservation measures.

The federal government recently launched a new program that will provide up to $20 million over four years to help Canada’s fisheries and aquaculture industries incorporate existing clean technologies into their day-to-day operations.

Potential projects could include; helping fish harvesters convert their vessels to clean alternative fuels, and reducing energy use on aquaculture sites.

Clean technology and innovation are key components of the government’s approach to promoting clean economic growth. The Fisheries and Aquaculture Clean Technology Adoption Program will provide funding to help a sector made up of primarily small and medium-sized businesses adopt innovative clean technologies that otherwise may not be possible.

The Fisheries and Aquaculture Clean Technology Adoption Program is part of a commitment in Budget 2016 of over $1 billion to support clean technology in Canada’s natural resource sectors.

Fisheries and Oceans Canada (DFO) is currently seeking the public’s opinion on its plans to expand the use of tickets for minor fishing violations.

Many minor fishing violations, such as failure to carry or produce a licence, currently involve charges and court appearances, which are often disproportionate, burdensome and stressful experiences for citizens. DFO plans to seek regulatory amendments to expand the use of ticketing under the Contraventions Act for various minor regulations offences that fall under the Fisheries Act.

An updated ticketing regime will enable citizens to instead pay a predetermined fine for minor commercial and recreational fishing infractions. This initiative will allow DFO Fishery Officers to devote more of their time and efforts to high priority files in their important work of conservation and protection of Canada’s fisheries.

The Government of Canada is committed to open and transparent communication and consulting with indigenous groups, stakeholders and the public, on the proposed expanded use of ticketing for minor fisheries violations.

Landings of wild-caught fish from Organization for Economic Co-operation and Development (OECD) countries are 40 per cent below their late 1980s peak and continue to decline, while aquaculture production has been increasing at an annual rate of 2.1 per cent since 2011, according to a new report. 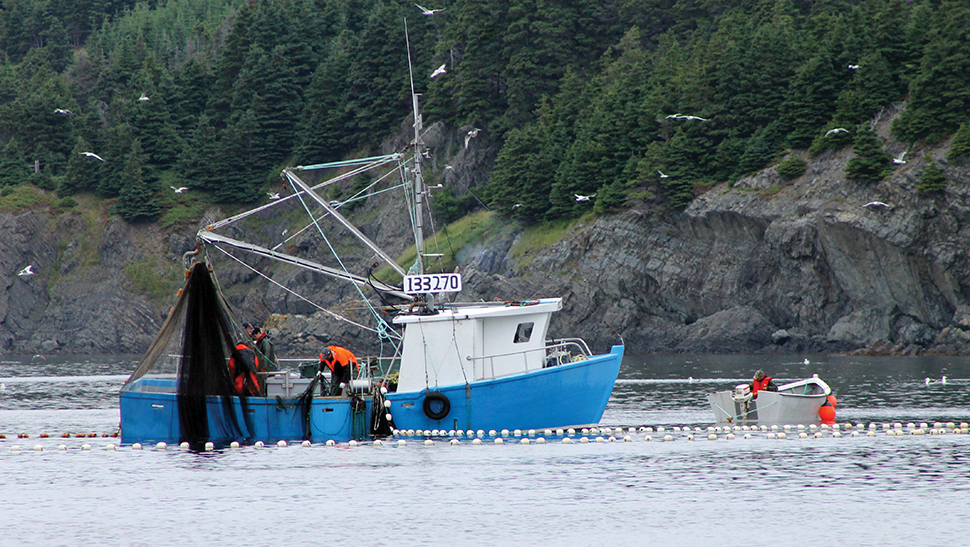 The diminishing quantity of wild-caught fish in OECD countries is the result of declining stocks, as well as the introduction of more restrictive fishing policies that aim to ensure sustainable exploitation of fisheries. Beyond the decline in volumes, wild-caught fish prices are no longer high enough to prevent the value of fisheries landings in OECD countries from falling, as was the case until 2011, according to the report.

The OECD Review of Fisheries 2017 covers 28 OECD member countries, as well as Argentina, the People’s Republic of China, Colombia, Indonesia, Lithuania, Chinese Taipei and Thailand, which together account for almost half of global fisheries production and for the majority of aquaculture production. The report finds that stated stock management objectives are being met for only 61 per cent of the reported 1,182 fish stocks.

The Review provides in-depth data on support provided to the fisheries sector by 26 OECD member countries, alongside Colombia, Costa Rica, Lithuania, China, Indonesia, Argentina and Chinese Taipei. Taken together, these economies provided $13 billion (U.S.) to fishers in 2015, equivalent to one-sixth of the total value of their landings. OECD member countries accounted for $7 billion (U.S.) of this sum, while China’s fishing industry, the largest in the world, received $5.7 billion (U.S.) in 2015.

The Department of Fisheries recently assigned eight Critical Habitat Orders under the Species at Risk Act.

A Critical Habitat Order focuses on protecting specific geographic locations and conditions essential for the survival and recovery of the species, such as where they give birth, hatch, feed or raise their young. Proposed activities in areas of designated as critical habitat must be assessed on a case-by-case basis and may require a permit before proceeding to ensure that the proposed activity will not jeopardize the species. A Critical Habitat Order prohibits human activities that may destroy the defined critical habitat of an at-risk species.

Fisheries and Oceans Canada is especially concerned about the plight of the North Atlantic right whale following multiple mortalities in the Gulf of St. Lawrence during the summer of 2017.

The Critical Habitat Order approved for the North Atlantic right whale will provide protection for the whale’s critical habitat in the Grand Manan Basin (Bay of Fundy) and the Roseway Basin (off Southwestern Nova Scotia).

An increasing number of North Atlantic right whales have appeared in the Gulf and DFO is continuing to take every measure to protect this iconic species, this includes determining what steps need to be taken, in consultation with indigenous groups, scientists, fishing groups and other stakeholders, to protect the North Atlantic right whales found in the Gulf of St. Lawrence.