The opening day of lobster season unfortunately did not go without incident.

The four-person crew of the Charlene A. escaped injury after the lobster boat sank on dumping day in early December. The crew members were rescued by another lobster vessel.

The Charlene A. began taking on water about 1.5 kilometres off Hacketts Cove, N.S., shortly after leaving the wharf at 7 a.m. The crew turned around and started heading back to port, but the vessel sank 300 to 400 metres offshore.

The vessel was later recovered, towed to shore and lifted out of the water.

CPTPP Kicks Off for Canada

The agreement formalizes a trading bloc between 11 countries that combined represents 13.4 per cent of global GDP, almost $14 trillion (USD) in economic activity and includes almost 500 million consumers. Also included amongst its membership are, Brunei Darussalam, Chile, Malaysia, Peru and Vietnam. As the CPTPP is implemented, tariffs will be eliminated or reduced on a wide range of Canadian agrifood exports, including: seafood, meat, grains, pulses, maple syrup, wines and spirits.

On January 14, 2019, the CPTPP will enter into force between Canada and Vietnam. Canadian exporters will immediately benefit from Vietnam’s first and second phase of tariff cuts.

A bill to expand nighttime lobster fishing in the “gray zone” between Maine and New Brunswick is aimed at allowing Maine lobster fishermen to monitor their traps at night.

The Quoddy Tides reported that state Rep. Will Tuell of East Machias submitted the bill, which would allow nighttime fishing from Labor Day to Memorial Day, at the request of a group of Cutler, Maine fishermen.

Maine fishermen are currently allowed to fish at night from Nov. 1 through Memorial Day and Canadians can fish at night through the proposed period. Cutler fisherman Brian Cates told the newspaper that Maine fishermen are finding their gear hauled and lobsters taken from their traps. But Brian Guptill, president of the Grand Manan Fishermen’s Association, said people likely act poorly on both sides of the border.

The gray zone is a disputed 277-square miles of sea around Machias Seal Island at the mouth of the Bay of Fundy. The island is a 20-acre rock about 10 miles from the Maine coast and 12 miles from Grand Manan Island, which is part of New Brunswick.

New changes announced in early December will make it easier for Nova Scotia harvesters, producers and members of the fishing and aquaculture industries to grow their businesses.

“Fishing and aquaculture are the backbone of the province, providing good paying jobs and economic benefits for those living in our coastal communities,” said Education and Early Childhood Development Minister Zach Churchill, on behalf of Fisheries and Aquaculture Minister Keith Colwell.

“The board has helped members of the industries buy new licences, finance or build new boats and buy new equipment, and we want it to continue to offer support for many years to come.”

The board has supported the fisheries and aquaculture in Nova Scotia for more than 80 years. Financing is available to clients who are likely to succeed and provides reasonable rates for people in the industries to finance their business. 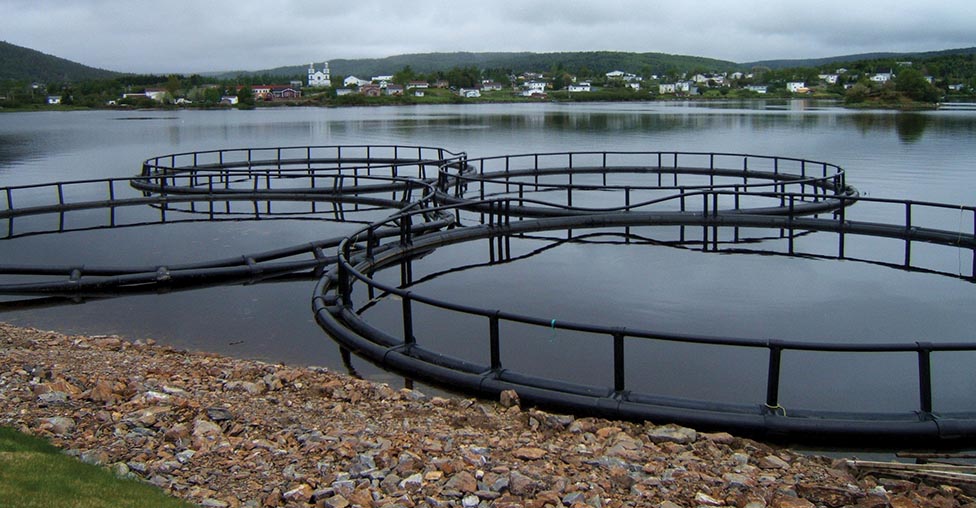 In 2018, the federal government asked Canada’s Chief Science Advisor, Dr. Mona Nemer, to examine how it can strengthen aquaculture science and how it informs decision-making.

The findings were recently presented to the Minister of Fisheries, Oceans and the Canadian Coast Guard, Jonathan Wilkinson, and the Minister of Science and Sport, Kirsty Duncan.

Together, the Ministers issued the following statement:

“We would like to thank Canada’s Chief Science Advisor Dr. Mona Nemer and the members of the Independent Expert Panel for their important work. We look forward to reviewing the findings and welcome the recommendations on how to strengthen our aquaculture science and evidence-based decision making. Making our oceans cleaner, safer and healthier is critical. We have a collective responsibility to ensure that fish and their habitat are protected for future generations, and we take this responsibility very seriously. Since Budget 2016, Fisheries and Oceans Canada has hired more than 290 science professionals across the country to better protect and manage our oceans.

Over the past two years, we have also put in place new practices and procedures in response to the Cohen Commission and the Commissioner of the Environment and Sustainable Development’s audit report on salmon farming. Earlier this fall, we announced that the Government of Canada has acted on all 75 recommendations of the Cohen Commission.”

The ministers added that work on several of the recommendations noted in the Expert Panel Report has already started. These include:

Hiring a departmental science advisor — the recruitment process is underway.

Developing a new, comprehensive suite of initiatives aimed at enhancing the environmental sustainability of Canada’s aquaculture sector. A key element of this work is the development of a framework for aquaculture risk management, based on the precautionary approach which will guide our decision-making.

Measures to address jurisdictional challenges — CCFAM Minister’s agreed to scope a federal aquaculture act. Such legislation would provide greater clarity to the industry as we move forward.

The Federation of Independent Sea Harvesters of Newfoundland and Labrador (FISH-NL) set Jan. 24 as the date for its next convention and election of officers at Gander’s Albatross Hotel.

As well, to coincide with the convention, FISH-NL is announcing the first ever Inshore Harvester of the Year Award.

“It’s full-steam ahead for FISH-NL,” says Ryan Cleary, President. “It’s our intention that 2019 will be the year of the inshore harvester and they’ll finally get the right to choose their labour future.”

Elections will be held for FISH-NL’s executive positions — including President, Vice-President, Secretary-Treasurer, Captain (Under 40 Fleet), and Captain (Over 40 fleet). Nominations will take place on the convention floor.

The convention will also deal with a number of proposed constitutional amendments — including term limits for executive members.

“Too many union leaders have jobs for life, building their own little empires around them,” says Cleary. “It’s my belief that FISH-NL should be structured so that not only can inshore harvesters vote the executive out if they’re not doing the job, but there will be automatic turnover after two terms.”

The Quebec and federal governments recently launched the Quebec Fisheries Fund (QFF), a five-year program that will provide $42.8 million in funding to the sector.

The federal government will contribute $30 million and $12.8 million will be provided by the government of Quebec.

Similar to the Atlantic Fisheries Fund (AFF), eligible projects must focus on:

In the coming months, the Government of Canada and the Government of Quebec will engage with a broad range of industry representatives, Indigenous peoples, non-government organizations and the science and academic communities in Quebec. This engagement will continue throughout the life of the program in order to inform investment priorities and identify opportunities and potential partners.

The value of fish and seafood exports from the province of Quebec was over $462 million in 2017.

On the eve of its biannual meeting in mid-December, the Groundfish Enterprise Allocation Council (GEAC) unveiled its new name, the Atlantic Groundfish Council.

The rebrand includes a new website and tagline, Responsibly Harvesting for Tomorrow, emphasizing the association’s commitment to a balanced, sustainable groundfish industry that puts the responsible management of the resource first and foremost.

The fishery has evolved significantly since the Council was formed over 20 years ago.

“Our association continues to be on the leading edge of the curve, evolving with market demands, understanding customer expectations and taking tangible actions to ensure Atlantic Canadian seafood is acknowledged worldwide,” added Bruce Chapman, President of the Atlantic Groundfish Council.

The Atlantic Groundfish Council team has grown over the past several years to include in-house expertise in fisheries science and sustainability standards. The group has partnered with industry associations, governments and international customers on its sustainability projects.

The members of the Atlantic Groundfish Council provide thousands of year-round jobs in areas where employment alternatives are often limited. Together, they represent an anchor industry that not only supports the crews on vessels and workers in plants, but also workers in boatyards, cold storage facilities, gear providers, welding shops, maintenance facilities and other service industries that are tightly integrated in the marine sector.

According to SeafoodNews.com, Quin-Sea Fisheries, which operates crab and shrimp plants in Newfoundland and is owned by Royal Greenland, has purchased Woodman’s shuttered New Harbour facility to export live lobster in coming years.

Managing director Simon Jarding said that with the continued forecasted decline of crab and lobster, it was imperative for the company to look to new opportunities. One of them is to build up a direct live lobster shipping capability to participate in the international market.

The facility will serve as a cold storage to the existing Quin-Sea operations in Newfoundland, but more importantly, the New Harbour site will become an integral part of Quin-Sea’s lobster strategy.

“We plan to make significant investment in the New Harbour site, to operate a live holding facility for lobster. It is our objective to promote Newfoundland’s premium quality lobsters directly to international markets,” Jarding added.

Given the results from recent science updates, the Maritimes Region, in consultation with the Newfoundland Region, has maintained the Arctic surf clam TAC at 35,699 tonnes for 2019.

The total originates from the combined Grand Bank TAC of 14,756 tonnes and the Banquereau Bank TAC of 20,943 tonnes.

Time for Commercial Cod Fishery to be Opened