The Executive Secretary of the Maritime Fishermen’s Union (MFU) was one of two men killed in a Dec. 5 head-on collision on Route 11 in Lower Newcastle, N.B.

Police reported that Christian Brun, 46, of Cormier Village was the driver of a car that collided with a car driven by a 69-year-old man from Miscou, N.B.

Brun was involved in the fishery since 2004, initially as a coordinator during a period of structural change at the Maritime Fishermen’s Union and in 2006, he became part of the executive team. 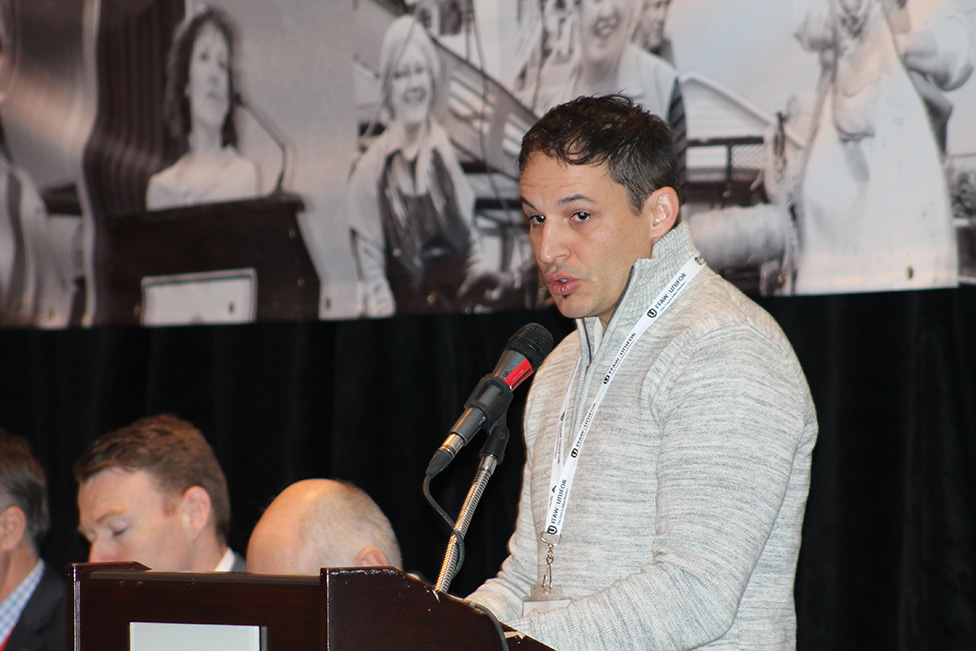 Reaction and condolences poured in from around the fishing community.

“I am shocked and deeply saddened at the news of the tragic death of Christian Brun,” wrote federal Fisheries Minister Dominic LeBlanc. “I have known and admired Christian for many years and feel privileged to have called him a friend.”

“As Executive Secretary of the MFU, Christian worked hard to defend coastal communities in Atlantic Canada,” wrote LeBlanc. “He always had the best interests of fishers at heart and he advanced their interests with vigour, dedication and principle.”

New Brunswick Minister of Agriculture, Aquaculture and Fisheries Rick Doucet said he had a tremendous amount of respect for Brun.

“He was a champion of the minimum size carapace, to protect the stock and improve the returns for the fishermen,” said Doucet. “Market access. Improving the quality of lobster with the onboard container system. The rehab program he put together for herring, the list goes on and on.”

The Fish, Food and Allied Workers Union (FFAW) issued the following statement, “the FFAW-Unifor is shocked and saddened by the death of our dear friend and colleague Christian Brun. As the President of the Canadian Independent Fish Harvesters’ Federation and the Executive-Secretary of the Maritime Fisherman’s Union, Christian worked tirelessly on behalf of fish harvesters across the country. Our deepest sympathies are with his family and friends.”

Investigators are trying to determine the cause of the crash, which happened on dry pavement and in good weather, police said.

Brun was originally from Cormier-Village. He attended the University of Ottawa and Moncton and graduated with an MBA in administration. He worked in South Africa for a total of eight years, mostly in Mozambique. He also worked in many types of areas of international community development.

Northern Harvest Sea Farms recently announced a $6-million expansion to its salmon hatchery in Stephenville, Newfoundland.
By expanding its hatchery, Northern Harvest Sea Farms will increase its production capacity by an additional 1.5 million smolts — or 6,000 tonnes of harvested product — each year.
The company has planned a number of other capital investments, including four new feeding systems for its operations throughout the province at $2 million each. 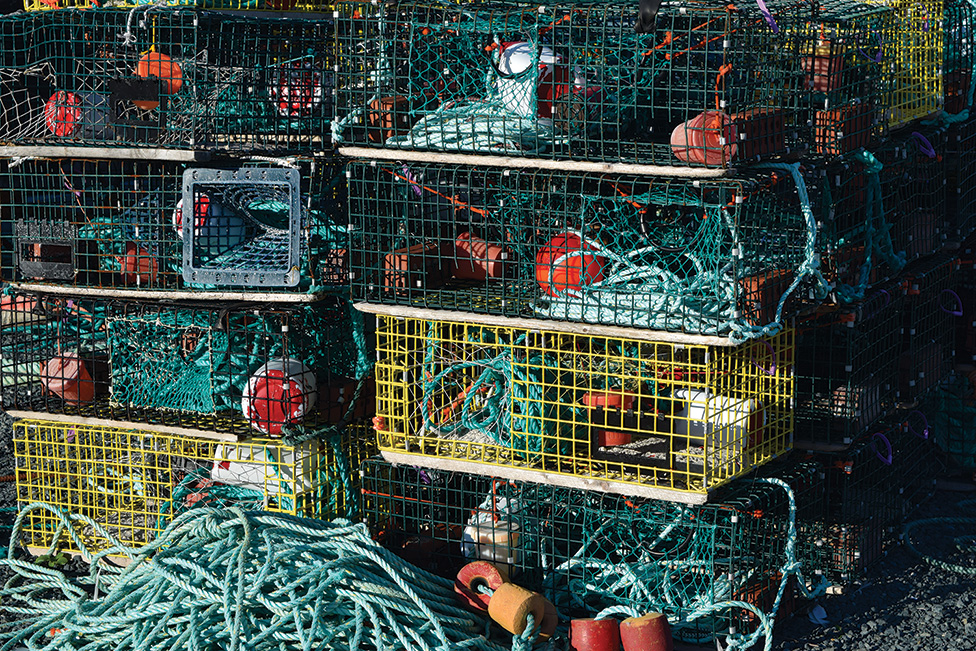 Lobster fishermen in New Brunswick continue to reap the benefits of strong catches and a good price, following the opening of the season on November 8.
Some fishermen are saying that the lobsters have been of higher quality so far this year.

Laurence Cook, chair of the Lobster Sector of the Grand Manan Fishermen’s Association, told the media recently “Right now it looks pretty rosy, but it could change drastically. There are plenty of lobsters, plenty of large lobsters, plenty of berried lobsters. Although warming waters because of climate change or shell disease could affect the lobster stocks at some point, it’s hard to find anything wrong. Right now, it looks really, really good.”

In some areas, lobster buyers are reporting that catch rates are up by as much as 10 per cent over last year.

Fishermen in the mainland areas of New Brunswick have been receiving between $6.50 and $6.75 a pound, while the price around Grand Manan has been about $6.35. Last year the average price was around $6.25, which was a $2 jump from the previous year.

The fire that destroyed the Capital Seafood lobster plant in Eastern Passage on November 16 has been ruled accidental in nature.
The ignition source was electrical and the fire started in a building office, according to Halifax Regional Fire and Emergency’s website. There were no injuries reported.
The plant, that has at times employed as many as 60 people, is owned by China-based Zoneco. The company has already stated it plans on rebuilding the processing facility.
The fire did not affect the live lobster shipment area, which has continued to operate.

Long Cove Plant May Not Be Replaced

CBC News has reported that Quin-Sea will not be rebuilding its Dorset Fisheries plant in Norman’s Cove-Long Cove that was destroyed by fire in July.

According to media reports, Quin-Sea has applied to Newfoundland and Labrador’s fish processing licensing board to take over the plant in nearby Southern Harbour, with plans to process groundfish, lobster, lumpfish and pelagics.

The Dorset Fisheries plant in Norman’s Cove-Long Cove burned to the ground July 21, totally destroying the facility that was employing about 70 people processing capelin at the time.
Company officials said hundreds of thousands of dollars worth of capelin and lobster were lost in the fire, as well as some fishing gear belonging to area harvesters. 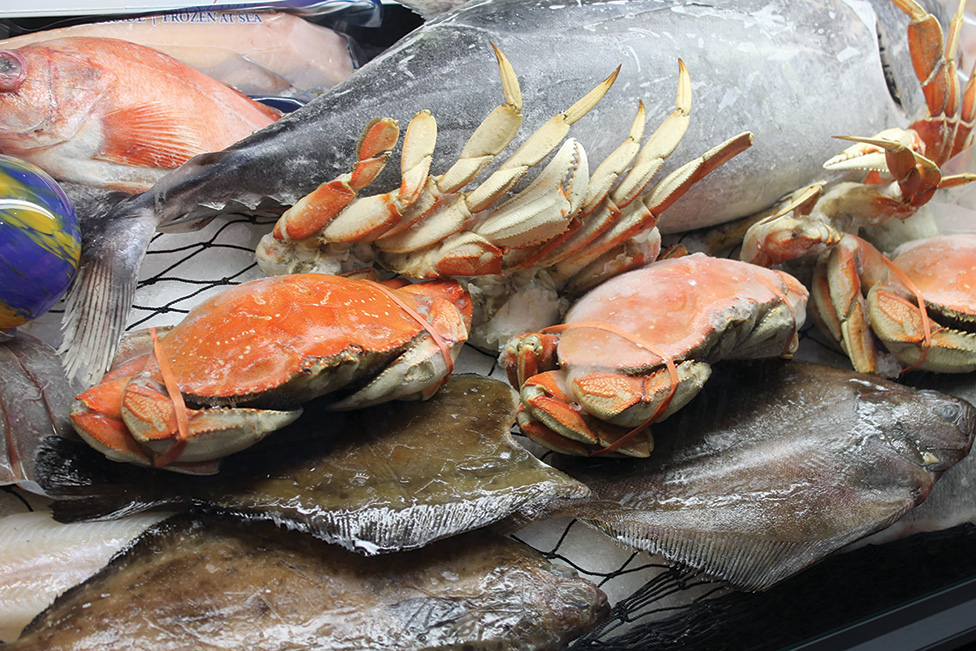 It is the second largest seafood show worldwide and expected to surpass the European Seafood Expo within a year or two. The expo attracted more than 1,350 exhibitors from 44 countries and regions. China has become an important market for these seafood sellers with its economic development. For example, Canada’s export of seafood like lobsters and salmon has doubled in the past year.

China has become the second largest buyer of Canada’s fish and seafood. In 2015, 12 per cent per cent of the country’s exported seafood was sold to the populous Asian country. 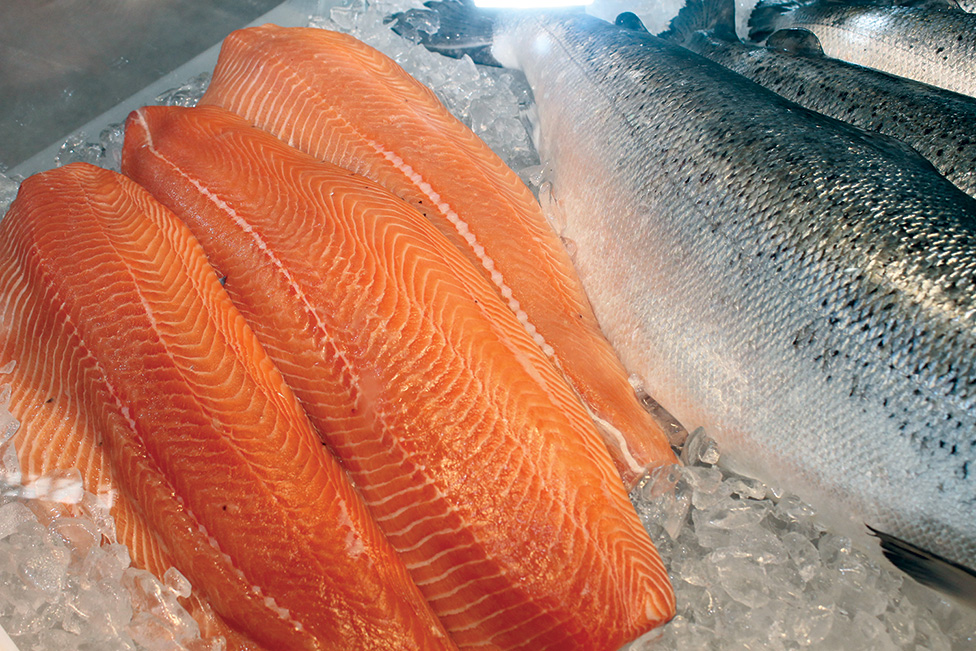 Genetically modified salmon producer Aquabounty wants to pursue purchasing or building a facility in the North American market to produce its AquAdvantage salmon for sale in the U.S. and Canadian markets.

The company said it plans to grow its revenues with the investment funds by expanding production to North America.

The company currently has facilities in Canada and Panama where it produces its AquAdvantage, genetically modified salmon products. Currently, the company produces the eggs for the fish in Canada and exports them to the Panamanian facility for grow out.

“Management is evaluating several paths to revenue generation that follow different timelines, including production of AquAdvantage fish at the company’s existing farm in Panama, purchase of an existing production facility in North America and construction of a new production facility in North America. The fundraising should provide AquaBounty with sufficient resources to meet its operational needs for at least the next two years from admission as well as its investment requirements to progress its strategy,” the company said in a statement.

The new device is called the “on-call” buoy and floats near the bottom attached to lobster traps.

With a timer or an acoustic signal, the device can be activated to unspool its line and float up to the surface for retrieval. The system would store the vertical line on the seafloor, keeping the lines out of the way large swimming animals, until the fishing vessel crew releases it and is on site and ready to haul it in.

Beyond protecting whales, the on-call buoys could have other potential benefits for lobster fishermen, preventing the loss of costly gear to entanglements. 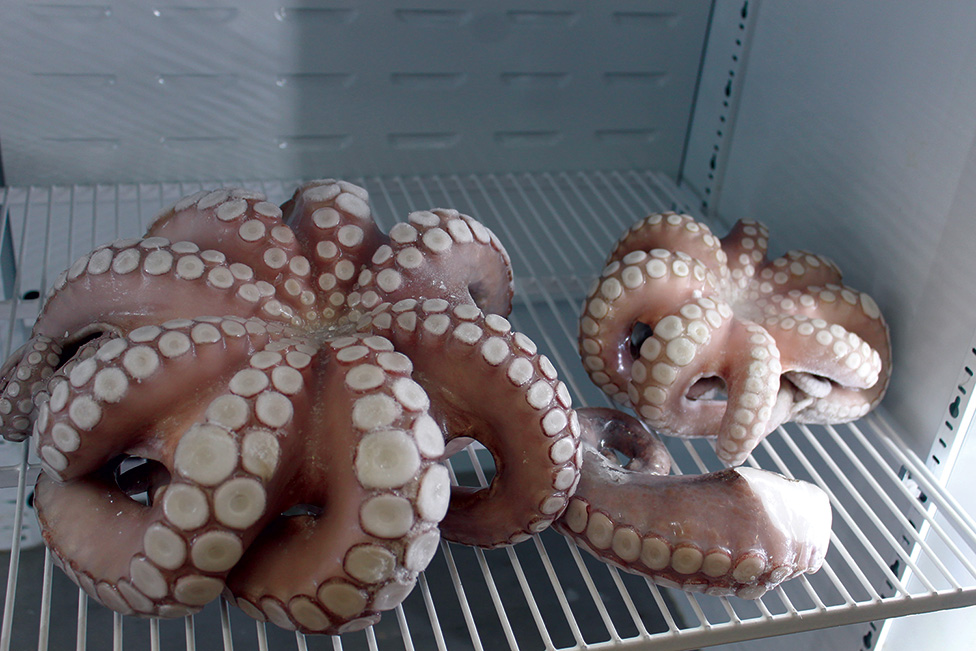 The Marine Stewardship Council (MSC) has started the second round of collections for its Global Fisheries Sustainability Fund (GFSF).

The GFSG is an initiative that helps small-scale and developing world fisheries achieve MSC certification. The fund is open to organizations including fisheries, governments and research scholars. It is designed to improve the research, knowledge, technology and guidance available to small scale and developing world fisheries working towards MSC certification.

The fund uses income from sustainable seafood sales to support fisheries which are yet to achieve the MSC Standard. It reflects a commitment to increase the accessibility of the MSC program to fisheries around the world.

“Fisheries which meet the MSC Fisheries Standard are helping to ensure healthy oceans for the future. For many fisheries, however, achieving the scientific, independently verified criteria required for MSC certification is a significant challenge. We established the Global Fisheries Sustainability Fund to support fisheries with the knowledge, tools and expertise they require to achieve the MSC Standard. This investment will not only help more fisheries to achieve their aspirations of sustainability, it will also help to secure seafood supplies and fishing-based economies for future generations,” says David Agnew, Director of Standards at the MSC.

Winning projects from the first year of the fund (2015/16) include risk assessment of tuna supply chains in Indonesia, data limited management methodologies for Suriname coastal artisanal fisheries and the use of smart phones to capture octopus fishery data in Madagascar. 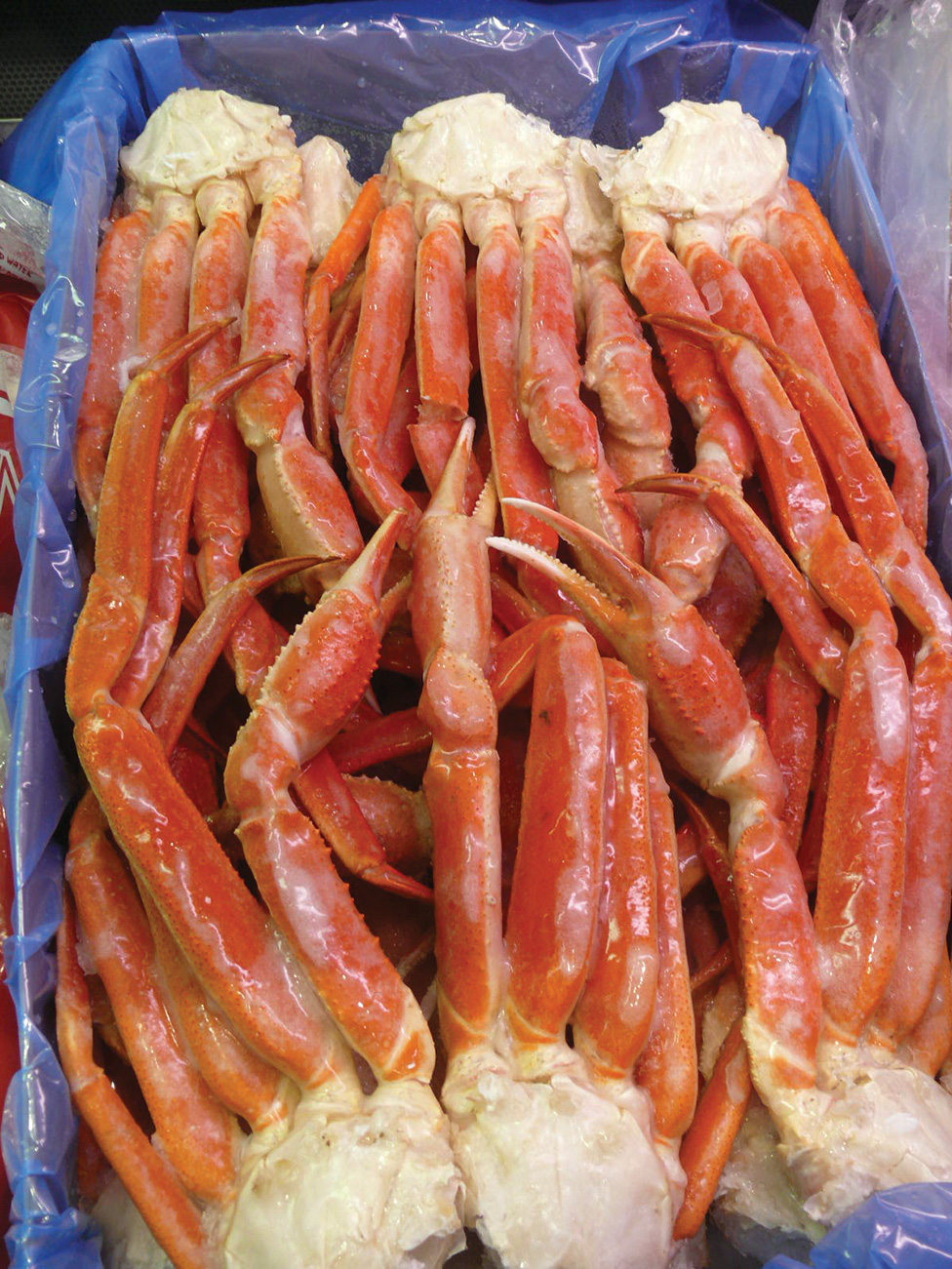 The Alaska Dept. of Fish and Game recently announced that the Bering Sea snow crab fishery would have its lowest harvest TAC in 45 years.

The last time the snow crab fishery in Alaska landed less than 21 million pounds was in 1971.

With snow crab prices already at record levels, with street prices over $7/pound for some products, there is no prospect that the crab fleet will make up the cut in revenue through increases in price, industry analysts have said. A doubling of the street price would put snow crab sections over $14/pound and that is extremely unlikely to happen.