On December 1, Clearwater Seafoods welcomed the Anne Risley into its fleet of clam vessels during an official ceremony at Pier 21 in Halifax.

The company said the new vessel further strengthens Clearwater’s commitment to delivering the highest quality, frozen-at-sea, wild-caught Arctic surf clams to its customers around the world.

“This investment follows the launch of the Belle Carnell in July 2015, which now completes Clearwater’s fleet modernization program, creating one of the most modern and technologically advanced fishing fleets in the world.” 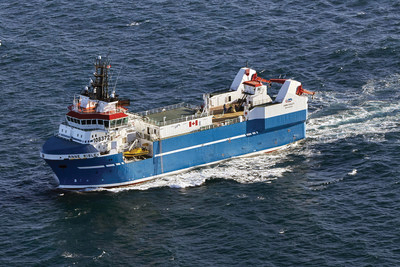 Named after Clearwater co-founder John Risley’s late mother, a Red Cross nurse and devoted mother of four, the Anne Risley will harvest Arctic surf clams year-round off the coasts of Nova Scotia and Newfoundland and Labrador. The vessel measures 73.4 metres in length and is equipped with the most up-to-date systems and multi-beam sonar technology.

The clams harvested by the Anne Risley and her crew will be automatically shucked and individually-quick-frozen within an hour of catch using the vessel’s proprietary and advanced harvesting and processing technologies. Products will be sold almost exclusively into international, high-value sushi and sashimi markets, greatly expanding both Clearwater and Canada’s seafood exports to the North American, Asian and European markets.

“Global demand for seafood is outpacing supply, creating favourable market dynamics for vertically-integrated producers. This investment is another demonstration of Clearwater’s ongoing commitment to create the greatest economic return for the fishery, while ensuring the principles of fisheries conservation science are upheld and respected, with resources safeguarded for future generations,” Smith noted.

A vote taken by Prince Edward Island lobster harvesters in areas 26A and 24A will likely lead to an increase in the minimum lobster size.

The proposal will add an additional 2 mm, for a minimum total carapace length of 74 mm by 2020. The increase in minimum lobster size has been controversial in P.E.I., because some in the industry feared a loss of customers who wanted the smallest sizes. But others saw a financial benefit in increasing the proportion larger lobster.

In New Brunswick, the move to a larger carapace size occurred several years ago.

After that, a review would be undertaken before proposing any further changes.

Launched in 2001, the Gold Leaf awards are given annually to recognize both companies and individuals who have made significant contributions to the biotech industry in Canada.

AquaBounty’s nomination competed alongside numerous others and selection criteria such as technology advances, business milestones, and contribution to the Canadian biotech landscape were evaluated by a voting panel of industry peers.

An environmental assessment committee has been appointed for the controversial Grieg salmon aquaculture project in southwestern Placentia Bay.

The committee is part of an effort to abide by the July ruling of Justice Gillian Butler who ordered that a full environmental assessment be carried out prior to approval of the project.

The Environment Department says draft guidelines will be posted on the project website for a 40-day public review period. 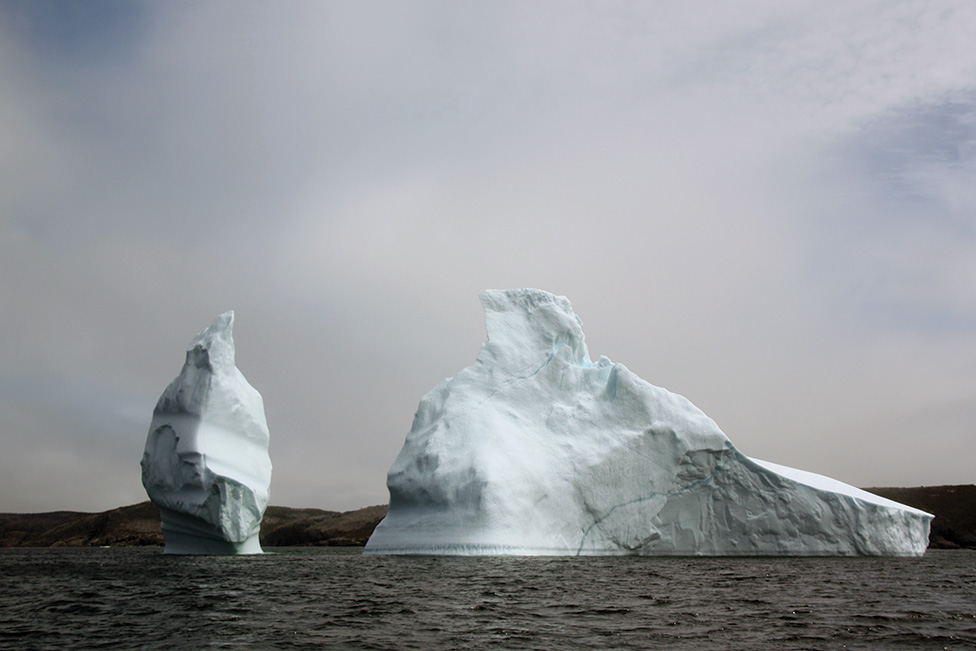 Is it a Ship or an Iceberg?

St. John’s-based applied R&D organization C-CORE and international energy company Statoil challenged the machine learning community to find a better way to classify an object seen in a satellite image as a ship or an iceberg.

Currently, more than 850 teams worldwide are working on the problem.

“The response has been terrific,” says C-CORE’s vice-president for remote sensing, Desmond Power.

“Unmatched, in fact. Statoil’s prize purse of $50,000 has certainly helped. But similar competitions with larger prizes have attracted less interest. I guess everyone is fascinated by icebergs. And everyone remembers the Titanic. Helping reduce that threat is a big motivator.”

During winter and spring, drifting icebergs can threaten navigation and marine operations in the North Atlantic, particularly in the area offshore Newfoundland and Labrador known as Iceberg Alley. Currently, the primary method for monitoring ice conditions and assessing iceberg risk is aerial reconnaissance, supplemented by platform and vessel-based monitoring. However, satellite sensors and data analysis are increasingly being integrated into monitoring processes, decreasing fuel consumption and reducing the carbon footprint and cost of iceberg monitoring.

Synthetic aperture radar (SAR) satellites are not light-dependent and can “see” through darkness, cloud, fog and most weather, taking snapshots over very large areas (up to 250 X 250 km). C-CORE has been working with satellite data for over 30 years and has developed a computer vision system that analyzes SAR data to automatically detect and classify icebergs and vessels.

Statoil, an active player offshore Newfoundland, is a frontrunner in developing and applying new technologies to ensure a safe, secure and cost-efficient supply of energy and to reduce carbon emissions. Statoil is already extensively utilizing information technology and digitalization, but the rapidly growing digital technology ecosystem creates new opportunities. C-CORE and Statoil, organizations dedicated to innovation, are asking if there’s a better way to automatically detect and classify icebergs and vessels by using machine learning.

C-CORE and Statoil are leveraging Kaggle, a platform for predictive modelling and analytics competitions in which companies and researchers post data, and statisticians and data miners compete to produce the best models for predicting and describing the data. This crowdsourcing approach relies on the fact that a wide variety of strategies can be successfully applied to any predictive modelling task and that competition is an efficient method for incenting and identifying the most effective technique.

C-CORE has created a dataset of 5,000 satellite SAR images containing either a ship or an iceberg. The SAR images are from the Sentinel-1A/B, a satellite constellation operated by the European Space Agency under Europe’s Copernicus program. Satellite radar works in much the same way as blips on a ship or aircraft radar: it bounces a signal off an object and records the echo, then that data is translated into an image.

An object will appear as a bright spot because it reflects more radar energy than its surroundings, but strong echoes can come from anything solid — land, islands and sea ice, as well as icebergs and ships. Competitors are challenged to build an algorithm that automatically identifies whether the object in the image is a ship or iceberg. The successful teams will share the $50,000-prize provided by Statoil. The improvements made in detection and classification will decrease the cost and carbon footprint of iceberg monitoring and increase the safety of marine operations in iceberg-prone regions.

The deadline for submitting a solution is January 16, 2018. More information on this competition and how to participate is available at https://www.kaggle.com/c/statoil-iceberg-classifier-challenge. 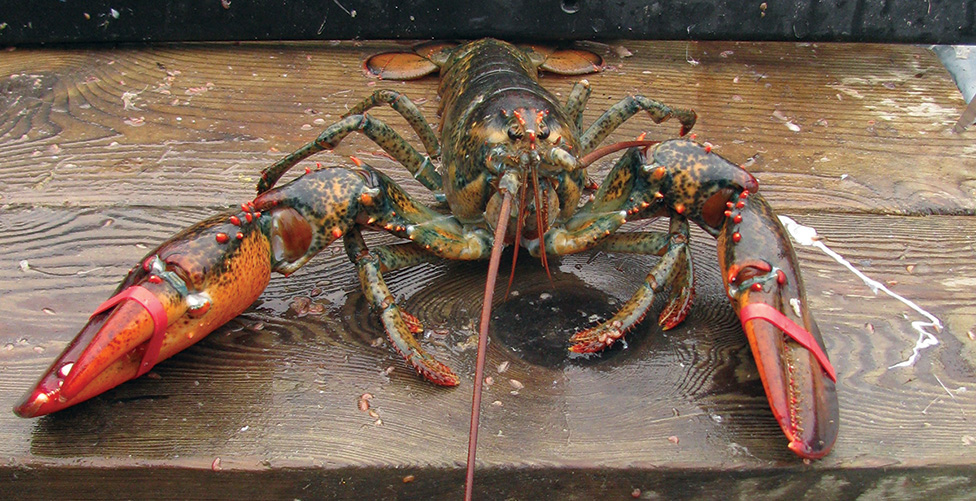 Maine Lobster Landings Predicted to be Down this Year

Maine lobster landings and prices are both down this year, according to the Associated Press.

Some industry insiders believe the catch could be as much as 30 per cent off this year. Prices are also lagging behind — the wholesale per-pound price for a 1.25-pound, hard-shelled, live New England lobster averaged $8.28 in October 2016 and $7.54 this year.

Some stores in Maine are selling them for $6 to $7 per pound, which is a little bit low even for the typically slow fall season.

Another concern is the new Canada-European Union deal that cut tariffs on Canadian lobster exports to the 28-nation bloc. That move gives Canada a considerable advantage over the United States in sending the premium seafood product to Europe, where it’s a delicacy in several countries.

Amirix is the parent company of Bedford, Nova Scotia-based Vemco and Realtime Aquaculture and Seattle Washington based HTI-Vemco.

Vemco and HTI-Vemco are leaders in fish tracking and monitoring solutions for fisheries researchers worldwide while Realtime Aquaculture specializes in real time environmental monitoring of fish farms. Both product lines are based on using acoustic telemetry to communicate wirelessly under water.

InnovaSea is a leader in the design and manufacture of innovative, fully integrated commercial open-ocean aquaculture systems.   InnovaSea supports open-ocean fish farming by designing and producing advanced, environmentally-focused sustainable technologies and service solutions for the industry.

In early October, Cooke Inc., the parent of Cooke Aquaculture Inc., and Omega Protein Corporation, announced that they have entered into a definitive agreement under which Cooke will acquire all outstanding shares of Omega Protein for $22 per share in cash.

“We are very pleased to sign this agreement with Omega Protein,” said Glenn Cooke, CEO of Cooke Inc.

“Omega Protein will provide us with another platform in Cooke’s growth strategy through further diversification in the supply side of the business. We believe this will be a very good fit between our two cultures. Omega Protein has a 100-year history with an experienced and dedicated workforce, which we value, and a tradition of operating in small, coastal towns and communities that we share. Their focus on sustainable aquaculture and agriculture and the production of healthy food is also a great fit with our experience and culture.”

Cooke carries on the business of finfish aquaculture globally through its wholly-owned subsidiary Cooke Aquaculture Inc.

In 2015, Cooke Seafood USA, Inc. was created, and grew rapidly through the acquisitions of Wanchese Fish Company, Inc. in the U.S. and the assets of Fripur S.A., the largest fishing company in Uruguay. The Cooke family also acquired Icicle Seafoods, Inc. in 2016.

The addition of Omega Protein serves as a perfect strategic piece for the Cooke family of companies.

“We are excited about the agreement, which we believe recognizes the value of Omega Protein’s successful, 100-year-old fishing business and also provides stockholders with an immediate premium,” said Bret Scholtes, President and CEO of Omega Protein.

“Cooke is a family-owned company and in many ways, reminds us a lot of ourselves and this agreement is the perfect fit for the two companies. Cooke is a highly-regarded and responsible leader in the global fishing and seafood industry.”

In a surprise announcement on December 6, federal Fisheries Minister Dominic LeBlanc announced publicly that he has been diagnosed with leukemia.

“During my annual physical exam last spring, my family doctor happened to detect an anomaly in my white blood cell count. She immediately referred me to a specialist, Dr. (Nicholas) Finn,” LeBlanc said in a press release.

The minister confirmed that “after several additional tests and consultations, doctors diagnosed me with chronic lymphocytic leukemia (CLL) in April 2017.”

Dr. Finn explained that “CLL is a chronic disease in the sense that it must be closely monitored and sometimes treated, but can be controlled. CLL is one of the most common types of leukemia in adults.”

LeBlanc added, “like tens of thousands of Canadians living with chronic illness, I will continue to work and to serve as Member of Parliament and Cabinet Minister, including during treatments.”

“Minister LeBlanc decided to begin his treatments next week. Due to the stage of the condition, the minister has the flexibility to schedule treatments in a way that will have minimal impact on his work. The treatments will conclude this spring. Minister LeBlanc can then expect a pause in treatment for many years, with only routine follow-ups,” said Dr. Finn.

“My decision to begin the treatments could not have happened at a better time. The parliamentary calendar gives me the flexibility to start right away,” Mr. LeBlanc said.

The minister continued, “Jolène and I are very grateful for the kind attention we are receiving from the doctors. We realize many Canadians face health challenges much more difficult than this. I am confident that this will not impact the work I will continue to do for Canadians.”