Lobster Boat Goes Down on Second Last Day of Season 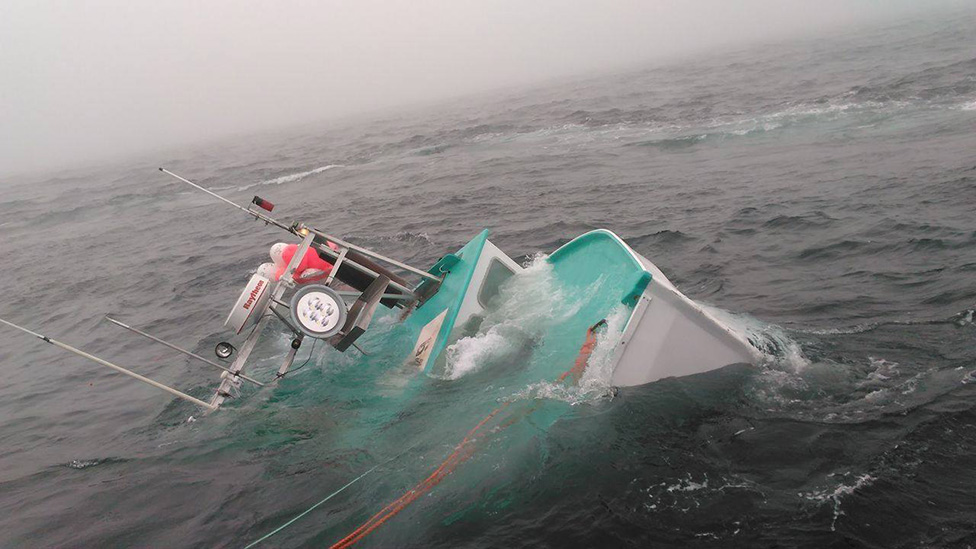 Lois N II began sinking, but the other vessel was in better condition and was able to take on the five-member crew of the sinking boat and transported them safely to shore.

The JRCC didn’t send any rescue teams to the accident, but Sub-Lt. Tobin said, “we are very happy to hear that both crews are now safely on shore.”

The vessel sinking took place one day before the South West Nova winter lobster season comes to an end.

In a press release, the Ecology Action Centre said it is disappointed to learn that the Atlantic Canadian mackerel quota has again been set far above scientific recommendations.

On May 31, Fisheries and Oceans Canada (DFO) announced that the total allowable catch (TAC) for mackerel in NAFO subareas 3 and 4 would be set at 8,000 tonnes, despite its most recent stock assessment for mackerel recommending that annual catches should not exceed 800 tonnes. As in 2015, the 2016 TAC has been set 10 times above the scientific advice, the Centre said.

Given the importance of small, forage fish species like mackerel to the marine ecosystem, as well as the current status of the stock, this is not a responsible or precautionary catch limit.

The Ecology Action Centre recommended that in subsequent years, the quota be set according to best available scientific advice and that management be according to the precautionary approach framework, already established by DFO. At a minimum, the 2016 quota should be lowered to current landings, to restrict fishing mortality on the stock until science is able to obtain a stronger understanding of the impacts of fishing to mackerel population health, as well as ecosystem factors such as environmental changes and predation that may impact population recovery.

There will be a new stock assessment in 2017, at which point the quota should be set in line with DFO’s own scientific advice, the Centre went on to say.

Conservation officers with Nova Scotia’s Department of Environment are about to complete training on the province’s new aquaculture regulations in order to conduct site inspections and will soon put that training to work.

Over the spring, conservation officers from across the province received a detailed review of the legislation, an industry overview, a presentation on the variety of shellfish and fish species and the types of farming operations in Nova Scotia, and training on how to disinfect equipment used during site inspections.

“By consolidating the roles of our fisheries inspectors and conservation officers within one department, we can better allocate our resources where and as they are needed,” said Margaret Miller, Minister of Environment. “Now 55 conservation officers are qualified to help site operators understand their responsibilities under the law. They will also conduct compliance checks and respond to complaints.”

Before the consolidation and training, only four fisheries inspectors were responsible for conducting all compliance and enforcement actions across the province.

Training for conservation officers was held in three locations across the province — Liverpool, Truro and Port Hawkesbury.

The new aquaculture regulations became effective Oct. 26, 2015. They are available at http://novascotia.ca/fish/aquaculture/laws-regs/

Near the entrance to picturesque Victoria-by-the-Sea, on the south shore of P.E.I., some of the tastiest and healthiest fish are being raised in-land.

The creative innovation in sustainable aquaculture began as a pilot project in 2009, and results have exceeded expectations. As a result, the federal government recently announced funding for a new stage in development for Halibut PEI.

After a promising phase of research, where underground salt water wells were used to rear halibut in Victoria P.E.I., the new product from Halibut PEI entered the market. Now, the company is looking to further its sustainable business model by supplying its own juveniles for the operation.

A repayable loan of $495,000 is being provided to Halibut PEI Inc through ACOA’s Business Development Program to help establish a new hatchery which will be integrated into the halibut grow out facilities. The Government of Prince Edward Island is providing a repayable amount of $355,000 through the P.E.I. Century Fund. 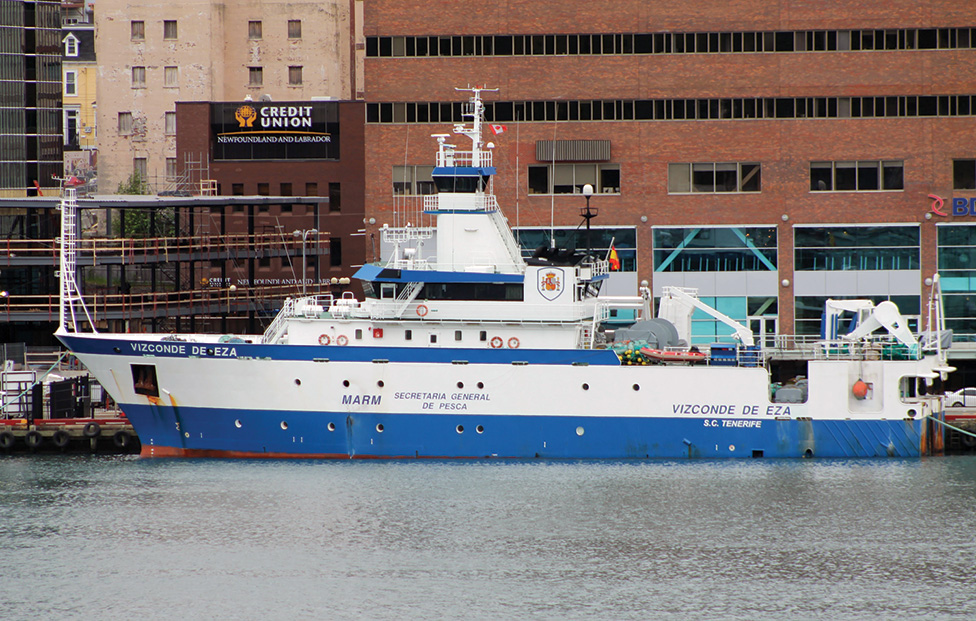 After a week’s voyage, it will perform a three-month survey on the Flemish Cap and Greenland Halibut 3L, in the NAFO regulatory area, to assess the main groundfish fishery resources having greater commercial interest for the Spanish fleet.

The collected data will make it possible to estimate the abundance, biomass and demographic structure of populations of commercial interest in the NAFO regulatory area, divisions 3NO (international waters adjacent to the Canadian EEZ), to a maximum depth of 1,500 metres.

To achieve the analytical assessment of fish stocks, a stratified random sampling will be performed in the area in order to obtain catch data, including carvings, biological parameters, samples for growth and reproduction and sampling of trophic relationships of important species from a commercial viewpoint, such as flounder, cod, Greenland halibut, redfish, yellowtail flounder, witch flounder or roundnose grenadier, among others.

In addition, invertebrate communities present in the catches will be studied and hydrographic profiles will be carried out to characterize the physico-chemical parameters of water.

These bottom trawling campaigns provide essential data for the study of the captured fish stocks and independent information on the fishing activity itself, which is essential for scientific evaluation. Thus, scientific reports that are necessary for the proper management of the fisheries target populations can be obtained.

The information obtained during this survey is employed in the NAFO Scientific Council to assess fish stocks on the Grand Banks of Newfoundland, of great interest to the Spanish fleet, apart from the several studies of biological and ecological character.

The Fish, Food and Allied Workers Union and fish harvesters in 3Ps, on the province’s south coast, are calling on the federal government to take immediate action to address the severe economic challenges facing harvesters in the area.

As a result of an unprecedented decline of fish resources in the area, harvesters are experiencing conditions that rival the cod moratorium, the FFAW stated in a press release.

“Through no fault of their own, harvesters in 3Ps are struggling to maintain an economically viable fishery,” said Keith Sullivan, FFAW-Unifor president. “The federal government must step in because harvesters cannot address this crisis on their own.”

There are more than 700 harvesting licenses in 3Ps and most harvesters rely heavily on snow crab. The snow crab fishery in the region has experienced a serious decline in recent years with quotas falling from 6,467 MT in 2013 to 4,299 MT in 2015. So far in 2016, harvesters are reporting extremely poor catches, Sullivan explained.

Harvesters in this region have also depended on cod. However, in recent years they have grown concerned about the health of the stock. In 2010, harvesters caught 100 per cent of their quota and despite the desperate need for income in 2015, only 42 per cent was landed.

“Both short and long-term measures are needed to ensure stable and sustainable futures for harvesters in 3Ps,” continued Sullivan. “Immediately implementing an EI extension for harvesters in addition to investing in an income improvement program will provide the support harvesters in the area desperately need.”

The province recently launched a Nova Scotia-China Engagement Strategy to capitalize on opportunities for growth in the Chinese market.

During the past 15 years, trade between Nova Scotia and China has expanded considerably. China is Nova Scotia’s second largest trading partner. Exports to China totalled $420 million in 2015, an increase of more than 50 per cent from 2014. In comparison, Nova Scotia exported $490 million to the entire European Union in 2015.

Fully implemented, the strategy will ensure the province works with Nova Scotia businesses and institutions that are seeking opportunities in China. To read the strategy, go to novascotia.ca/china/

Gérald Doiron, 40, died May 14 in a workplace accident in Caraquet, N.B.

According to RCMP, workers were using a truck to unload ice onto a boat at the Caraquet wharf when something went wrong. The exact cause of the death is under investigation, but it’s believed he was struck by ice that slid out of the truck, pinning him in the boat. Three others were injured in the incident.

WorkSafeNB is investigating the accident.

The Cooke family recently announced the signing of a definitive agreement for the purchase of Icicle Seafoods Inc.

Once closed, Cooke said in a press release, the deal will enhance the family’s investments in both the wild fishery and the aquaculture sectors, making them leaders in the U.S. salmon farming sector and a major player in the Alaskan salmon fishery.

“The closing of this deal will be an exciting venture for us as it will add a well-respected fishery to our family businesses,” said Glenn Cooke, President of Cooke Seafood Inc.

“We have tremendous respect for the Alaska fishery and its highly valued brand in the seafood marketplace. Our family and our business is rooted in a small coastal fishing town on the east coast of Canada and we have become a mainstay to communities in rural and coastal Maine.”

The deal will include Icicle’s three business units, which harvest and process over 150,000 metric tonnes of seafood annually: wild salmon, groundfish and farmed Atlantic salmon. By adding the Atlantic salmon farming operations in Washington State to its current operations in the State of Maine, Cooke will be able to strengthen its leadership role in the United States aquaculture sector, the press release explained.

It will also become the only company in the world that farms salmon while holding a significant market position in wild salmon.

The Collector — Part I