The Nova Scotia Seafood Alliance (NSSA) has succeeded the Nova Scotia Fish Packers Association, to advocate for and strengthen the voice of the province’s small and medium-sized onshore seafood companies.

The Fish Packers Association represented processors for more than 40 years. The Nova Scotia Seafood Alliance will build on that legacy, and reflect the scope and diversity of modern onshore fisheries operations. The new organization was officially established on March 1.

“We are proud of our history, and look forward to a successful future with a new focus and direction,” said Osborne Burke, President. “More than just a name, we have a renewed purpose as an advocate and a consistent voice to government and other key audiences. At the heart of our mission is inclusion. We are stronger when we work together.”

The Alliance will ensure the voice of its members is heard where decisions are made that impact the fishery, Nova Scotia’s largest exporter and economic sector, valued at $1.8 billion annually.

The priority of the Alliance is to attract new members from every region of the province, representing all species of seafood.

The Alliance will continue its predecessor’s strong record of industry leadership. By working together, the sector can overcome new challenges including sustainability, a demanding regulatory environment, the logistics of serving international markets, and rapidly-changing technology. The organization’s new tagline — Working together works — reflects its goals. 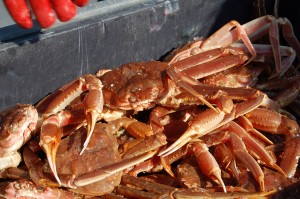 The website, Seafood.com, recently reported that Gulf of St. Lawrence snow crab landings in New Brunswick and Quebec are outpacing Newfoundland and Labrador.

In the Gulf, out of a 39,000-tonne quota, about 65 per cent has been landed in May and it looked likely the quota would be caught by the end of the season, at the end of June.

In Newfoundland, for all NAFO divisions, which include the fishing areas outside of 200 miles, the total quota is 35,000 tonnes of which 38 per cent had been taken as of May 31.

The Department of Fisheries and Oceans (DFO) recently announced new, short-term temporary measures, as well as more permanent arrangements will also be introduced for the inshore SFA 6 Northern shrimp fishery.

A May 24 fire completely destroyed the Miscou, New Brunswick fish plant, which employed about 100 people on the Acadian Peninsula.

Firefighters battled the fire but could not save the plant on Miscou Island, which is at the northeastern tip of the province.

The plant, owned by Rue de Quai de Miscou, produces about one million pounds of herring products a year, as well as snow crab and lobster and exports to the United States and Europe.

The cause of the fire is under investigation

Straddling Canadian and international waters, 3LN redfish has a colourful history dotted by interaction with Soviet, Cuban, South Korean, Portuguese and Spanish fleets. Overfishing in the late 1980s caused depletion that led to a moratorium being declared on directed fishing in 1998. After years of careful management, the stock recovered and the fishery was re-opened in 2010.

Managed by the Northwest Atlantic Fisheries Organization (NAFO), a cautious Total Allowable Catch (TAC) is established through a well-tested harvest control rule that has been peer-reviewed by scientists from NAFO-member countries. This management approach has proven effective at continuing stock growth and is expected to continue to guide this fishery through long-term sustainability.

Canada holds 42.6 per cent share of the TAC, the majority of which is caught by Ocean Choice International vessels fishing on the Grand Banks of Newfoundland.

A South Korean importer has been arrested for selling American lobsters under a Canadian label for two and a half years.

The importer is accused of importing 18 tonnes of American lobsters worth 2.1-billion Won (US $1.9 million) in 321 shipments from September 2014 to March this year and selling them to local restaurants as more expensive Canadian products.

The accused earned about 2.6-billion Won from the alleged fraud, as American lobsters are about 20 per cent cheaper than their Canadian counterparts in the local market. The importer is accused of replacing the origin labels of imported lobsters and fabricated the relevant documents to sell them as Canadian products to local restaurant owners. 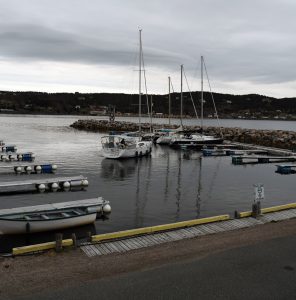 Christopher Mitchelmore, Minister of Tourism, Culture, Industry and Innovation, and Betty Parsley, MHA for Harbour Main, announced $345,950 on behalf of the province and Ken McDonald, Member of Parliament for Avalon, announced $273,600, on behalf of the Honourable Navdeep Bains, Minister of Innovation, Science and Economic Development and Minister responsible for the Atlantic Canada Opportunities Agency for this project.

These investments assist with the final phase of a three-phase project to enhance marine and land-based infrastructure at the Holyrood Marina Park. Phase III will include the development of spaces and path linkages to improve land-based use of the facility, the expansion of berth space, as well as the development of facilities to promote non-motorized ocean recreational activities.

The revitalization and expansion of the Holyrood Marina Park will also enhance tourism and recreational opportunities for the Town of Holyrood and surrounding areas, and will offer improved amenities to the region.

For the first time, Greenland halibut has received sustainability certification from the Marine Stewardship Council.

Although Greenland halibut (Reinhardtius hippoglossoides) is commercially fished by several nations with Arctic coastlines, the most productive fishery is off the west coast of Greenland in the Baffin Bay. The fishery represents about half of Total Allowable Catch (TAC) of the stock, according to MSC.

Sustainable Fisheries Greenland (SFG) entered the fishery into MSC assessment in March 2016 and the fish can now be sold globally carrying the blue MSC label.

Greenland halibut is often referred to as Greenland turbot and in Canada is known as Newfoundland turbot. The fish is smaller than Atlantic halibut and Pacific halibut, both of which are a different species entirely.

The MSC-certified fishery uses trawl gear and operates in Baffin Bay and the Davis Strait off West Greenland. It has been in operation since the mid-1960s. Fishing in the area is managed by the Government of Greenland, Ministry of Fisheries and Hunting, who set the annual TAC.

Enforcement by the Greenland Fishery License Control Authority (GFLK) subjects the fishery to logbook obligations and an observer scheme. Mesh size for nets has a regulated minimum of 100 mm in the underwing and 140 mm in the rest of the trawl, which avoids bycatch, and discards are banned.

In Greenland, Greenland halibut is the most valuable flatfish species in Greenlandic waters with most of the catch being exported to China and Japan for fillets, sushi and sashimi.

Bosch Rexroth Canada will be primarily responsible for OEM with a limited focused End User business. TRC together with Bosch Rexroth will work jointly to promote and introduce the latest technologies to the region.

TRC Industrial Hydraulics, founded in 1986 with over 30 years business experience and with approximately 100 employees, is located in three hydraulic full-service, sales and repair facilities across the region; Nova Scotia, New Brunswick and Newfoundland and Labrador, as well as one manufacturing location in New Brunswick.