The Ministerial Advisory Panel on the Last In, First Out (LIFO) policy specific to Northern shrimp will be holding seven public consultation meetings in the following communities:

The purpose of the meetings is for the panel to obtain advice from organizations, interested parties and other stakeholders on whether LIFO should be continued, modified, or abolished.

Anyone interested in making a presentation at one of the meetings must register in advance. Registration information and details for each of the meetings will be made available on the LIFO web pages on the Fisheries and Oceans Canada website. While the panel is independently carrying out the review process for LIFO, the department is providing the panel with logistical and administrative support. Members of the four-person panel include Barbara Crann, Wayne Follett, Paul Sprout (chair) and Trevor Taylor.

The written report to the Minister will be provided in French or English and a final copy will be provided to the Senior Assistant Deputy Minister (ADM) of Ecosystems and Fisheries Management (EFM) no later than June 15, 2016.

Meanwhile, the 2016 Northern shrimp spring price was recently released. This season fishermen will get a minimum price of $1.22/pound. This is down from the 2015 blended spring price of $1.40/pound. 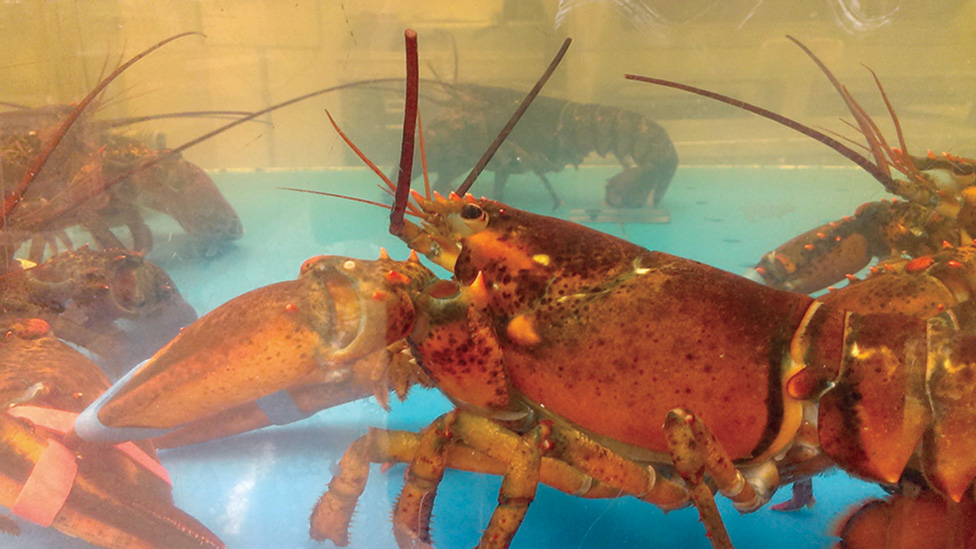 The industry has worked hard to recruit new people, officials said, but numbers still aren’t where they need to be.

P.E.I. plants need a total of about 1,900 workers during peak season, Dennis King, executive director of the Seafood Processors Association, told CBC in a recent interview.

A student bursary has attracted more workers than expected. About 75 workers from Newfoundland, who lost their jobs when the Quinlan Brothers’ Bay de Verde plant burned down, are also working in Island fish plants.

More temporary foreign workers are expected to arrive soon, as well, mostly from China, Kosovo, Thailand and the Philippines.

Province to Seek to Intervene in Oceanex v. Canada and Marine Atlantic

Newfoundland and Labrador’s Minister of Justice and Public Safety and Attorney General recently announced that the province will apply to intervene in the case of Oceanex v. Canada and Marine Atlantic to oppose Oceanex’s application to compel the federal Minister of Transport to increase Marine Atlantic’s commercial ferry rates.

“On a daily basis, Marine Atlantic’s commercial freight service brings groceries, medical supplies and other important items that residents rely on to the province. If successful, this application by Oceanex seeking an increase to the commercial ferry rates for Marine Atlantic will have a direct and negative impact on the cost of goods in Newfoundland and Labrador. We will take whatever legal steps that are necessary to protect the constitutional right of Newfoundlanders and Labradorians to a modern and affordable ferry service,” Andrew Parsons said.

The Terms of Union are part of the Constitution of Canada and under Term 32(1), Canada is constitutionally obligated to provide ferry service between Port aux Basques and North Sydney.

Commercial ferry rates at Marine Atlantic already increased by 2.6 per cent on April 1, 2016 and if Oceanex is successful, rates would increase further.

The government of Canada is investing $801,215 in two east coast business initiatives.

Aimed at supporting Nova Scotia’s fish and seafood exporting industry, the federal government plans to direct $500,000 toward a NovaCan Live Seafood technology project, as well as $301,215 toward a Université Sainte-Anne business development program.

“The seafood industry is a key economic driver here on Cape Breton Island, particularly for our rural communities,” said Rodger Cuzner, MP and parliamentary secretary to the Minister of Employment, Workforce Development and Labour and Member of Parliament.

“The federal investments announced will work to support research and development initiatives to ensure our workers are ready and our products are of the highest quality as we export them to tables around the world.”

The half-million-dollar investment in NovaCan Live Seafood will support the roll-out of a new technology the company has developed for storing live snow crab for extended periods of time — something that will allow for greater exports by opening up distant markets. Following years of company research, the funds will contribute to building a new facility capable of storing up to 150,000 pounds of live crab.

Meanwhile, the federal government’s investment in the Université Sainte-Anne’s Marine Research Center will allow the school to develop a mobile seafood processing unit. The unit is expected to serve both as a training facility and as a resource for the local fishing industry, allowing students to transition seamlessly into the workforce.

Halibut harvesters in Newfoundland and Labrador are calling on the federal government to address the previous government’s wrongs by establishing fair quota allocations for Gulf of St. Lawrence halibut.

Representatives of FFAW-Unifor recently made a presentation to the Gulf Groundfish Advisory Committee reviewing halibut allocation decisions made since 2007.

“Previous sharing agreements have resulted in significant and disproportionate reductions in quota for Newfoundland and Labrador harvesters,” said Keith Sullivan, President of the Fish, Food and Allied Workers Union (FFAW-Unifor).

“The federal government must use this review as an opportunity to right the wrongs of the previous government, who manipulated these agreements for political gain.”

Between 2014 and 2015, halibut quota for Newfoundland and Labrador harvesters only increased by 9.3 per cent while Prince Edward Island, home province of then Minister of Fisheries and Oceans Canada, Gail Shea, saw an 87 per cent increase in quota.

Prior to 2007, N.L. harvesters had a significant and increasing percentage of the total fixed gear catch in 4R3Pn. In 2007 other provinces requested that the quota in the area be shared. Despite having a mandate to base the agreement on historical participation levels, which would have maintained a substantial share for N.L., the Department of Fisheries and Oceans Canada adjusted the formula to minimize the N.L. share. Subsequent decisions have further eroded this share.

West coast harvesters have some of the lowest earning opportunities from the fisheries and are heavily dependent upon Atlantic halibut. On the south coast, harvesters in 3Ps, who were not given consideration for their historic share of halibut, hope to supplement difficult cod and crab fisheries with an improved halibut catch.

“The sustainability of coastal communities is reliant on a strong inshore fishery,” continued Sullivan. “Fishery management policies must be more reflective of historical attachment and economic dependence.” 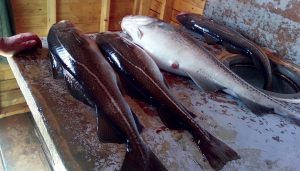 The Iceland Marine Institute has released data from its spring survey and it shows the highest cod biomass since the mid-1980s.

The 2014 year class is a bit weaker, but the preliminary results on the 2015 year class show very strong recruitment. 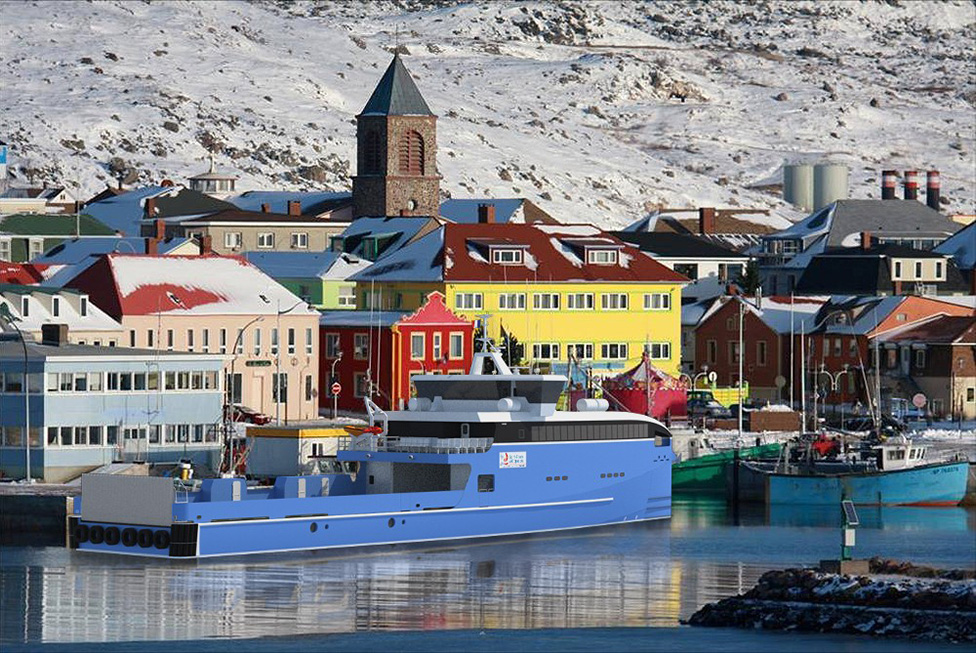 The same year the contract was awarded to the Damen Shipyards Group and, in January 2016, the loan agreement with Rabobank was signed. The project was launched on March 11 at an event in Paris and the vessels will be delivered at the end of 2017.

In close cooperation with the client, Damen designed the Fast RoPax 5510, 55-metres long, 11-metres wide, with a capacity for 192 passengers and crew, three trucks or 18 cars, motorcycles and cargo.

Collectivité de Saint Pierre et Miquelon is a new customer for Damen. The client required full redundancy for the vessels; the French islands being situated some 25 miles from Fortune. The high speed capability of the RoPax5510 ensures a crossing in a little over one hour.

A representative of the Collectivité said “The construction of the ferries for the Collectivité has been subject to an European tendering procedure. Damen has been chosen at the final outcome for a number of reasons, including the technical capacity to meet the requirements of the Collectivité. These consist of building capacity, compliance with the specifications, understanding of the project, and capability to execute the mission. Additionally, Damen’s financial capacity makes possible the completion of such deal along with the offering of all necessary warranties. Also important were Damen’s willingness and ability to provide answers and information during the tendering process, the company’s quality certification and, of course, tendering in line with the project financing capacities.

“Since the signing of the contract and the administrative orders, we have been delighted with the choice we have made because of the warm welcome we received, and the quality of the follow up of the project.”

Reinier van Herel, Damen’s Regional Director, France, comments “This design combines a passenger ferry and a fast supply boat. The vessels have the renowned Damen Axe Bow. This first of the ‘5510 Series’ is actually based on more than 150 Axe Bow vessels — a proven design — but it has been lengthened and widened for cargo and cars. This pioneering design is a result of a very close cooperation between Damen’s Ferry and High-Speed Craft departments, as well as with the client.”

It is expected that the arrival of the ferries will make the islands much more accessible, encouraging, amongst other things, an increased level of tourism in the region. The sister vessels will be operated by Régie des Transport Maritimes. They will sail to Saint Pierre et Miquelon under their own keel from Damen Shipyards Galati in Romania.

The ferries will be customised to withstand the severe weather conditions common to the area and will be built under the regulations of Marine Marchande and registered under the French Flag State. Additionally, given the pristine environment in which the ferries will operate, it was important that emissions be minimised. The new ferries are IMO, EPA, MARPOL and Transport Canada compliant.

After discussions with the boatbuilding industry, the Prince Edward Island government determined there was a real need for additional workers, due to the high demands for fibreglass boats as of late, said Prince Edward Island Economic Development and Tourism Minister Heath MacDonald.

“Boat building in P.E.I. has been an active industry and has undergone a number of changes over the years, including the demand from wooden boats to fibreglass boats,” said Minister Richard Brown, Workforce and Advanced Learning. “The training program will allow participants to develop skills required to make a successful transition into the boat building industry and the Island workforce.”

“This program creates an opportunity for Islanders to receive hands-on technical training, while providing P.E.I.’s boat builders with a more skilled workforce to meet their long term needs,” said Nicole Warren, Executive Director of Central Development Corporation. “There is space for 15 participants, and we encourage all those interested to apply before the end of the month.”