The North Atlantic Fish and Workboat Show returns to Mile One Centre in St. John’s, Newfoundland this fall.

Taking place November 16-17, 2018, this year marks the sixth edition of this biennial event.

After a record-breaking edition in 2016 — featuring more than 100 exhibitors and nearly 4,000 qualified visitors over the course of two days — this year’s event is expected to surpass all previous expectations.

“This event has a history of bringing together key buyers and suppliers from across the commercial marine industry,” said Show Manager, Shawn Murphy.

“It features a broad exhibitor base, new and innovative products, and an engaged audience who are in the market to buy. We love bringing this show to Newfoundland and Labrador every two years.”

Presented by The Navigator Magazine and produced by Master Promotions Ltd., this show is a can’t-miss opportunity for those who make a living in, on, or around the water. Show features include boats, engines, supplies, safety gear, fish processing and everything in between.

As part of the event, the latest group of inductees into the Atlantic Canada Marine Industries Hall of Fame will be honoured at a ceremony during the show. Further details on the nomination process will be available soon on the show website: www.NAFISH.ca.

On Feb. 2, Dominic LeBlanc, Minister of Fisheries, Oceans and the Canadian Coast Guard, announced that Kirsty Duncan, Minister of Science and Minister of Sport and Persons with Disabilities, has asked Canada’s Chief Science Advisor, Dr. Mona Nemer, to lead an independent expert panel to provide recommendations on the appropriate use and consideration of scientific evidence in protecting the marine environment in decision-making on aquaculture.

The panel will also provide advice on the communication of this science, and associated decisions, to Canadians. This corresponds with the Chief Science Advisor’s mandate to ensure that government science is fully available to the public, scientists are able to speak freely about their work, and scientific analyses are considered when the government makes decisions.

Nemer will deliver a report of the expert panel to the ministers. The report will be made publicly available.

“Our government understands that Canadians have real concerns around aquaculture. We look forward to the recommendations of the panel led by the Chief Science Advisor on how science can be better applied to decision making and communicated to the public in support of sustainable aquaculture as we seek to remain a strong, science-based regulator of the aquaculture industry,” LeBlanc said.

The company, Mustad Autoline Canada, will be offering area fishermen easy access to its hook and line systems.

Mustad develops and supplies technology to the world’s line fishing fleet and is continuously developing new and innovative solutions so that more fish can be caught by hook and line.

Mustad Autoline is a leading company in supplying automated longline systems to fisheries all over the world.

The Nova Scotia provincial government will no longer be issuing new lobster buyer and processing licences.

The announcement in early January by Fisheries and Aquaculture Minister Keith Colwell came after a meeting of industry stakeholders who were being consulted as part of a departmental review of plant licensing.

“We’ve put a freeze in place to stop everything until we get a new framework in place and new policy, maybe a new act. I don’t know where it’s going to lead us,” Colwell told the CBC.

The minister added that the temporary freeze will have no impact on existing operators because they can activate dormant licences.

According to CBC reports, the Nova Scotia Seafood Alliance, representing fish plants, called on the province last year to stop issuing new buyer and processing licences. The organization argued there is processing overcapacity, especially on the lobster side.

The agreement marries the Grieg Group’s extensive experience in the salmon industry with OCI’s leading expertise in seafood processing and marketing and marks the continued long-term commitment and cooperation of the two family-owned companies to develop the Placentia Bay Aquaculture Project.

The project represents a significant investment of $250 million into the economy of rural Newfoundland and Labrador.

The Newfoundland and Labrador Government recently released the draft environmental assessment for the Grieg Aquaculture Project in Placentia Bay to the public for viewing.

Last November, government announced that Grieg NL Nurseries and Grieg NL Seafarms would have to provide an environmental impact statement (EIS) as part of their environmental assessment.

A committee has prepared a draft of the guidelines that will be followed during the EIS.

Grieg is planning to construct and operate a land-based recirculation aquaculture system (RAS) hatchery for Atlantic salmon in the Marystown Marine Industrial Park and 11 marine-based farms in Placentia Bay.

The land-based hatchery will produce up to seven million triploid smolt annually, which will be sold to salmonid aquaculture farms in the province and will be developed on approximately 10 hectares of serviced land. The 11 marine-based farms will be located in four Bay Management Areas (BMA): Rushoon BMA, Merasheen BMA, Red Island BMA and Long Harbour BMA. Each marine-based farm will consist of multiple cages with cage collars at the surface and nets extending down to 43 meters. The Bay Management Areas will occupy 1,958 hectares of which 24 hectares will be occupied by the sea cages. The project was originally scheduled to commence in April 2016.

Switzerland Has Adopted New Rules for Stunning Lobsters Before Cooking

Switzerland has banned the widespread practice of throwing fresh lobsters into boiling water as part of an overhaul of its animal protection rules.

“Live crustaceans, including the lobster, may no longer be transported on ice or in ice water. Aquatic species must always be kept in their natural environment. Crustaceans must now be stunned before killing them,” state the new rules, which will come into effect in March.

More suggested humane methods of killing and cooking include freezing lobsters to stun them and driving the tip of a knife swiftly through their heads before adding them to hot water. 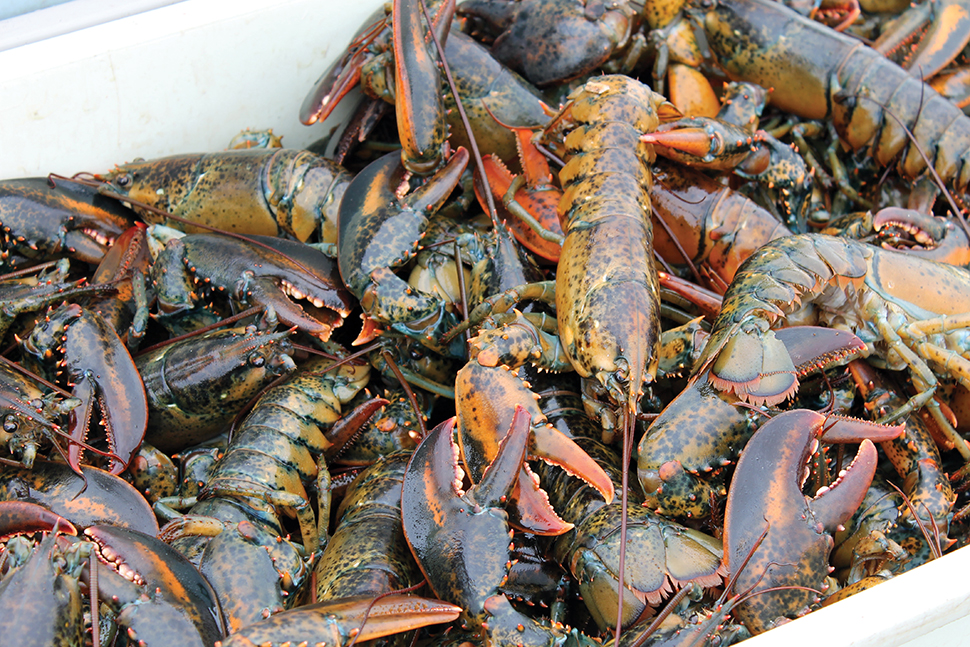 The Prince Edward Island lobster fishery brought in 36.4 million pounds in 2017, which adds up to approximately $226 million, according the provincial government.

The total catch was up nearly 20 per cent over 2016, when the industry landed 30.6 million pounds.

FFAW to Submit Concerns to C-NLOPB

The Canada-Newfoundland Offshore Petroleum Board (C-NLOPB) recently announced that it is accepting calls for nominations for new areas of oil and gas exploration.

As a part of this process, the C-NLOPB is now accepting comments from all stakeholders, including the fishing industry, which is significantly impacted by oil and gas operations in the province.

In a press release, the FFAW-Unifor said it had several meetings with the province and the C-NLOPB to consider the fishing industry in the land tenure process. Previously, input into this call for nominations would be closed to all but oil and gas companies.

The FFAW-Unifor said it will be submitting comments that will bring to attention the socio-economic impacts of oil and gas exploration, development and production on the fishing industry.

“Our members are concerned about how new exploration regions will further affect the traditional fishing grounds of harvesters, whether it be through seismic activity, future areas closed to fishing, or threat of an oil spill,” said Keith Sullivan, President of FFAW-Unifor.

“Each of these concerns has a negative impact on harvesters and the potential environmental impacts are gravely concerning to our members whose livelihoods depend on the health of fish resources, especially the recovering Northern cod stock.”

FFAW-Unifor will also advise the C-NLOPB to take into consideration Marine Conservation Targets when considering new oil and gas exploration areas of interest. A significant portion of the area available for nominations within the Eastern Region is within the newly announced Northeast Slope Marine Refuge, meaning harvesters are not permitted to fish in the area but oil and gas activities may persist.

A Norwegian company plans to build one of the world’s largest land-based salmon farms in Belfast, Maine.

Nordic Aquafarms, an international developer of land-based aquaculture, has signed agreements to purchase 40 acres on the outskirts of the city and plans an initial investment of $150 million in the project, according to the Portland Press Herald.

Nordic Aquafarms CEO Erik Heim said his company chose Belfast after a six-month search that started in Japan and China, then took stock of Ireland and Spain before settling on Belfast.

The facility will raise Atlantic salmon in large onsite tanks and is expected to produce 33,000 tons of salmon annually.

It was the Grand Winner as the 2017 Best Documentary Feature at the recent California Film Awards in San Diego.

A worldwide VOD release of Bluefin through U.S. distributor Gravitas Ventures and the NFB in Canada, is coming soon, with a total subscriber reach of over one billion. Bluefin is being invited back to Toronto on February 27, for a private “Fish Talk” screening and panel with celebrity chef Ned Bell and OceanWise, targeting the food industry and issues of seafood sustainability and fisheries. 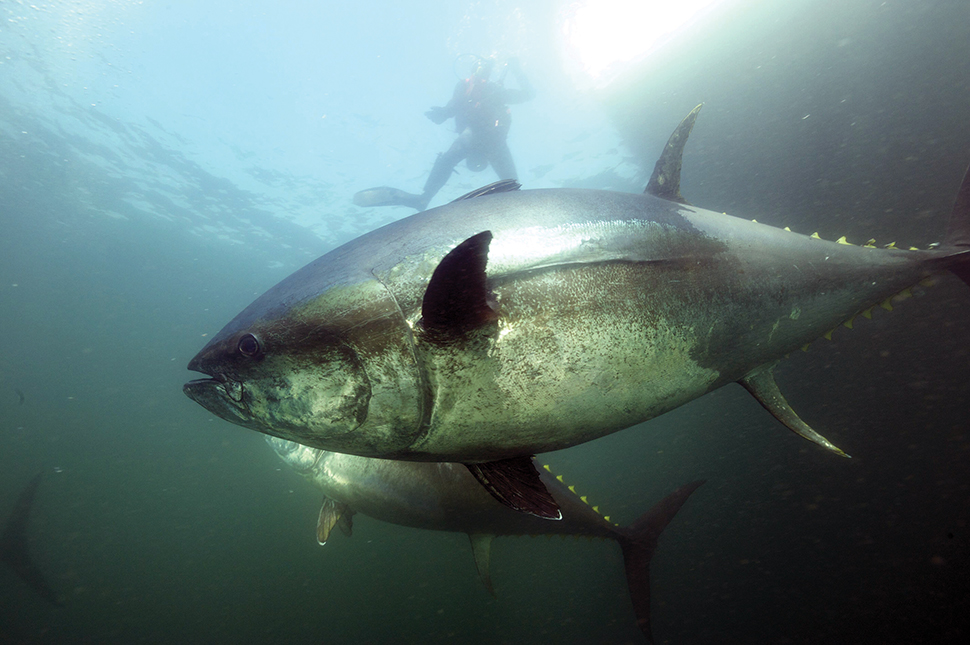 Frozen food retailer Iceland has announced it will become the first major retailer globally to eliminate plastic packaging from all of its own brand products by the end of 2023.

The company says that the process starts now and that it will be an important step towards cutting down on the one million tonnes of plastic generated by supermarkets in the U.K. each year.

In its place, Iceland says it will be harnessing the latest technologies to create a range of packaging, comprising paper and pulp trays along with paper bags which are fully recyclable through domestic waste collection or in-store recycling facilities, and therefore less harmful to the environment.

Iceland Managing Director, Richard Walker, is driving this initiative to demonstrate the potential for the entire supermarket retail sector to go plastic-free as far as possible.

Stop Putting the Cart Before the Horse