The Association of Seafood Producers (ASP) says a new free trade deal covering internal trade in goods and services in Canada is an historical achievement, on this, the 150th anniversary of Confederation.

“Today’s agreement is an historical agreement, and goes together with the legacies of FTA, NAFTA, CETA and other free deals signed by our federal government with countries around the world,” said Derek Butler, Executive Director of ASP.

Butler says seafood products have generally free trade across the country, with some limitations. He says the best benefit for now is the new impetus this deal gives to economic growth in the country.

“A stronger, freer, economy is a win-win, for businesses and consumers, and this can only benefit the market opportunities for seafood sales across the country,” said Butler.

Ferryland RCMP members responded around 10 a.m. when they learned witnesses had taken a man out of the water and paramedics had begun cardiopulmonary resuscitation. According to police, the man was taken to St. Clare’s Hospital in St. John’s, where he was later pronounced dead.

Police do not suspect foul play.

New Organization May be Created to Regulate Arctic Fishing

A new regional organization may be created to regulate Arctic fishing if reserves are discovered in the central part of the Arctic Ocean outside the zones of national jurisdiction of the Arctic countries.

The announcement was made by the Russian Federal Agency for Fishery following the Meeting on High Seas Fisheries in the Central Arctic Ocean held in Reykjavik on March 15-18, 2017.

The meeting was attended by representatives of the Arctic Five (Russia, the United States, Canada, Norway and Denmark), as well as delegations of interested fishing states (Republic of Korea, Japan, China and Iceland) and the EU.

Irving Shipbuilding, the main contractor for the combat portion of Ottawa’s multi-billion-dollar shipbuilding strategy, made the announcement in Halifax recently.

The contract will create two new positions at the boat shop, which employs a dozen people.

Additionally, A.F. Theriault & Son shipyard from Meteghan River, N.S., will build the composite hulls and components for the rescue boats. Fifteen people will be employed by the yard for this project.

Irving Shipbuilding has committed more than $1.3-billion in spending to more than 300 Canadian groups, including more that $580-million in contracts to companies in Nova Scotia. 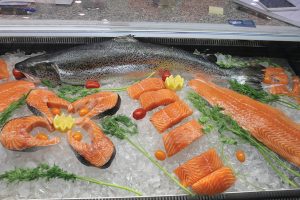 Total aquaculture production in 2016 was 28,622 tonnes, representing a 25.5 per cent increase the previous year. The growth was primarily a result of increased Atlantic salmon production.

Total market value for the industry reached a record high in 2016; totaling $276 million, compared to $161 million in 2015. The rise in market value was primarily due to increased Atlantic salmon production, stronger market prices, and favourable exchange rates.

Market prices for fresh, live mussels remained relatively stable in 2016, with some minor fluctuations due to exchange rates.

In 2016, salmonid production increased significantly to 25,411 tonnes, valued at $263 million. This represents a 29.1 per cent increase in production volume and a 76.9 per cent rise in market value compared to 2015.

In Newfoundland and Labrador, the blue mussel is the main commercial shellfish aquaculture species. Shellfish production in 2016 was on par with the previous year; however, the production value rose slightly as a result of favourable exchange rates. Production volume for shellfish was 3,211 tonnes, representing a 2.6 per cent change over 2015. Market value was up 5.6 per cent to $13.6 million.

Lobster fishermen and tidal power opponent Colin Sproul will run for the NDP in the next provincial election against Nova Scotia Premier Stephen McNeil in Annapolis.

The election could be called as early as this fall.

McNeil won the riding by 76 per cent in the last election.

Sproul is a spokesman for the Bay of Fundy Inshore Fishermen’s Association. It believes a tidal power turbine deposited at the mouth of the Minas Basis could harm the fishery. Lobster larvae move from the Valley shore line into Minas Basin.

While Sproul contends that this could affect lobster production in south west Nova Scotia, the bulk of larvae for this fishery, which includes over 1,600 fishing vessels, is hatched from Browns Bank.

The Association has taken the owners of the tidal project to court to stop their action until a true template of the effect on local fisheries can be ascertained.

Proponents of the project say in order to do this, they need a turbine on site with multiple monitors, which is what they have done. This project is part of Nova Scotia’s effort to come up with clean electric sources.

The federal government is helping out with the funding for Team Seafood this year.

The program provides a $1,000 bursary to students who take jobs at seafood processing plants, which is on top of their hourly wage.

The P.E.I. Seafood Processors Association is also receiving $33,750 from the Labour Market Development Agreement and $11,250 from the Atlantic Shrimp Corporation to support student recruitment.

The Fisheries and Marine Institute (MI) of Memorial University of Newfoundland has launched a new Technical Certificate in Aquaculture Management in partnership with the Newfoundland and Labrador Aquaculture Industry Association (NAIA).

This 12-day program (three days per course) consists of two required courses and two elective courses that can be selected from six possible options. Courses span a wide range of aquaculture management skills and include topics as diverse as human resources, project management, farm management, communications, regulations and policy, as well as computer skills. All courses were developed from the national occupational standard validated by the Canadian Agricultural Human Resource Council (CAHRC) and the Canadian aquaculture industry.

Recently, the training was offered in Harbour Breton in the Coast of Bays Area and several employees of Cold Ocean Salmon and Northern Harvest Sea Farms took part.

The Federation of Independent Sea Harvesters of Newfoundland and Labrador (FISH-NL) said it is pleased with the latest order of the province’s Labour Relations Board regarding the release of membership lists of commercial inshore harvesters.

After hearing arguments, the board ordered the Fish, Food and Allied Workers union (FFAW) to turn over its list of commercial inshore harvesters who were members of the FFAW between Jan. 1, 2015 and Dec. 30, 2016 to its investigating officer.

The Board also ordered ASP (the Association of Seafood Producers) to hand over its list of inshore harvesters on whose behalf members of the association collected and remitted FFAW union dues between Jan. 1, 2015 to Dec. 30, 2016 to its investigating officer.

As for FISH-NL, the Board ordered that the new union provide the investigating officer with the basis of its conclusion that the FFAW has far fewer members than it claims.

As requested by the board, FISH-NL will provide information to the investigating officer regarding the size and makeup of the bargaining unit of inshore harvesters. All information will remain confidential with the Board. 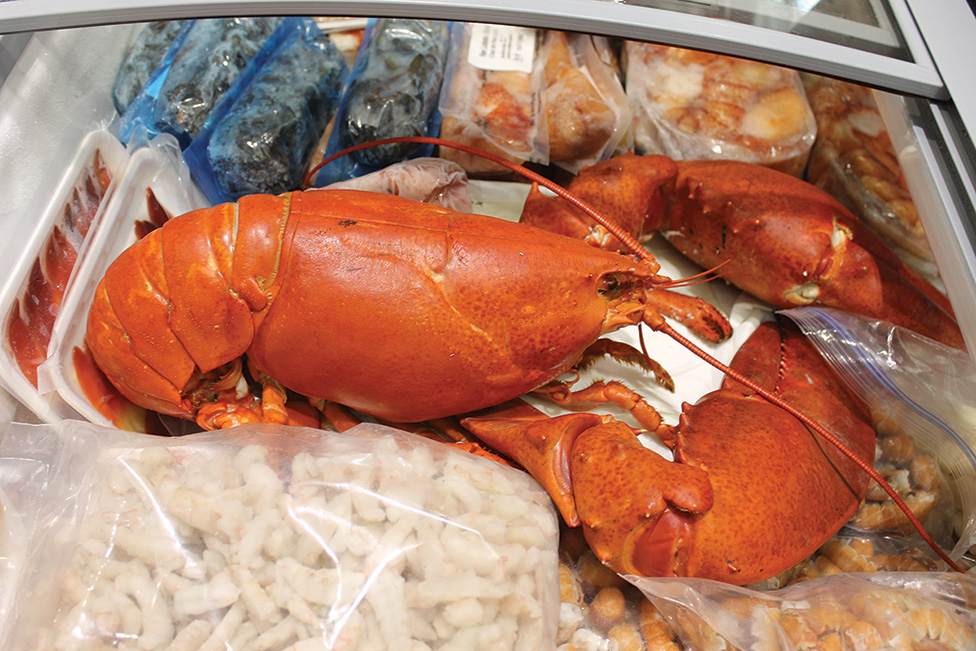 The value of Maine lobster landings reached a record high in 2016 from unprecedented demand in U.S. and Chinese markets.

According to data from Maine’s Department of Natural Resources, the value of the state’s lobster landings in 2016 topped $500 million. The figure was up nearly $30 million from 2015. The fishery is by far the most valuable marine resource in the state, accounting for about 75 per cent of Maine’s total commercial marine resources.

Maine’s lobster landings in 2016 were also record-setting. It was the first year ever that Maine lobster harvesters landed over 130 million pounds. It was also the fifth year in a row in which Maine lobster harvesters landed over 120 million pounds. Historically, about half of Maine’s lobster landings are exported to Canada for processing into meat and claws. This was no different in 2016. U.S. lobster exports in 2016 reached 68.8 million pounds. Of the remaining share of Maine lobsters sold in the United States, no more than 20 per cent is sent to the domestic processing industry.

Global demand has been the key factor in driving up the value of Maine lobster. In the United States, the restaurant sector has featured more lobster meat items on menus in recent years. This has been the result of high availability of soft-shell lobsters combined with effective national marketing efforts by Maine’s Lobster Marketing Collaborative (MLMC).

Meanwhile, Chinese demand for live lobsters, and now frozen whole cooked lobsters, has pinched live lobster supplies despite record landings out of Maine. Through November 2016, the value of live lobster shipments from Maine to China climbed to $27.5 million, nearly tripling from the $10.2 million reported in November 2015.

Live lobster supplies were also impacted since fishing in Canada’s major producing regions LFA 33 and 34 in Nova Scotia was mostly a bust because of poor weather this past winter. But Canadian lobster sales to China continue to increase, the value of lobster shipments from Halifax directly to the Chinese market was up $40 million in 2016.

This put upwards pressure on lobster market prices in the U.S. Urner Barry’s prices for Mid-Atlantic and New England American lobsters trended to all-time records in 2016.