The objective of Rural Works is to build a broad and inclusive coalition focused on strengthening rural economies with good jobs, better pay and a longer working season. The Rural Works coalition will bring together the fishing sector, local governments, and the business community to work together to continue driving employment and wealth in rural N.L.

The fishery is worth more than $1 billion annually with most of those benefits flowing to rural N.L. New fisheries opportunities working alongside a booming tourism industry have the potential to grow the prosperity of rural N.L. 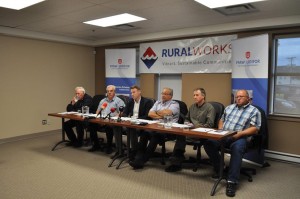 The coalition will work together to advocate for adjacency in fisheries management, meaning that those who live alongside the resource should benefit most from it.

“The economies of rural N.L. are held back by poor federal fishing policies that deny the people of N.L. the real benefits of the fishery. The federal government’s attack on applying adjacency and historic attachment when allocating fish quotas currently costs rural economies well over $70 million dollars annually. We’ve seen this with halibut and we’ve seen this with shrimp and it is a possibility with cod,” said FFAW-Unifor President Keith Sullivan.

Rural Works acknowledges that one of the largest hurdles to creating a strong, sustainable rural economy is the current demographic difficulties in many rural areas. The solution that Rural Works will pursue is to create new and better jobs.

“The jobs of the new fishery will require more skill, provide better pay, and be for a longer season. Those jobs will attract people back to our towns and attract new people as well. A sustainable community needs people and people need jobs,” said Twillingate Mayor Gordon Noseworthy.

Sullivan says the FFAW is well-positioned to lead this coalition and has already received tremendous support from municipalities and the business community.

Grieg is planning to construct and operate a recirculation aquaculture system (RAS) hatchery for Atlantic salmon in the Marystown Marine Industrial Park. The project will include the construction of a hatchery, a smolt nursery and a smolt landbase and will encompass approximately 10.2 hectares of serviced land.

The hatchery will produce up to seven million smolt annually, which will be sold to salmonid aquaculture farms in the province.

The project is anticipated to generate up to 200 full-time and part-time jobs during the construction period and 23 full-time positions during the operations phase. Construction is forecast to begin in the fall of 2015, with operations scheduled to commence in August 2016.

The undertaking was registered on October 1, 2015, the deadline for public comments is November 9, 2015 and the minister’s decision is due by November 15, 2015.

Georges Bank Cod Stock May be Even Lower Than Predicted

The already beleaguered cod stock on the Georges Bank might be even in more trouble than scientists first estimated.

New data from the Northeast Fisheries Science Centre says research boats caught less of the fish this spring than in all but one spring dating back to 1968. The Associated Press reported that boats caught about 3.3 pounds of cod each time the survey net went in and out of the water last spring, compared with more than three times that amount two years earlier. Those numbers were routinely more than 20 pounds per trip in the late 1980s.

Regulators say the Gulf of Maine, home of the other key cod fishing ground off of New England, is also in dire shape — the National Marine Fisheries Service scientists said last year the amount of cod spawning in the Gulf was estimated to be three per cent to four per cent of its target level.

“Our department is pleased to work with industry to gather relevant information about the fishery at a time when solid scientific information is a must for effective management and decision making. Continued support for science and research will help provide valuable information for the future sustainability of our fisheries,” McIsaac said.

Prince Edward Island fishermen have recently acquired a 32.7-tonne increase, approximately 100 tuna, in allocation for Atlantic bluefin tuna through a Canadian/Mexican quota transfer agreement signed by the Department of Fisheries and Oceans (DFO). As part of the transfer agreement, Prince Edward Island has joined with six other bluefin tuna fleets to conduct additional science and research into the fishery.

Some of the projects Prince Edward Island fishers are involved in are the collection of otiliths (ear bones) and tuna flesh, deployment of ICCAT tags on released fish in the charter fishery, and further analysis of logbook data of recent years.

In recent months, J. Willy Krauch & Sons had the difficult task of closing its sole processing facility located in Tangiers, Nova Scotia. The Comeau group of companies saw this acquisition as a method of preserving a long-standing tradition with a history, not unlike its own, the company explained in a press release.

As of September 28, 2015 production of the J. Willy Krauch & Sons brand will solely be taking place at Comeau’s Sea Foods Ltd. Saulnierville branch.

The International Council for the Exploration of the Sea (ICES) is recommending status quo regarding Greenland Halibut (Turbot) quotas for the Northeast Arctic area, including the Northwest Coast of Norway and the Barents Sea. 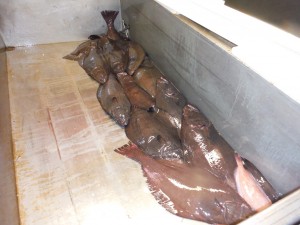 Seafoodnews.com reported that total Greenland halibut harvests are recommended at 19,800 tonnes. This is consistent with the long-term stability of the fishery. The ICES model was recently revised to better represent the reliability of the data and this has resulted in some changes to their advice.

The other area where ICES gives advice is for the Northeast Atlantic west of Scotland, including waters off Iceland and Greenland. Here the TAC is recommended at 22,000 tonnes and the stock is exhibiting stable biomass as well.

The company’s facility works on a closed-containment system that recycles all saltwater in the salmon tanks, while waste is drawn out and used as fertilizer.

The salmon are fed organic fish food, and since the farm carefully controls any contaminants that enter the tanks, it is not necessary to give the fish antibiotics.

The salmon are marketed under the brand name Sustainable Blue, and the fish and their waste do not have any contact with the ocean.

Havercroft said salmon will be sold to restaurants and fish brokers in Nova Scotia, and to a small broker in Toronto that specializes in sustainable products.

Sustainable Fish Farming has been developing the closed-containment technology since 2007.

The Sustainable Blue site is currently capable of producing 100 tonnes of salmon per year. There are already additions underway to allow the site to produce 165 tonnes per year.

Eating a lot of fish may help curb the risk of depression in both men and women, reveals an analysis of the available evidence.

After pooling all the European data together, a significant association emerged between those eating the most fish and a 17 per cent reduction in depression risk compared with those eating the least, the Business Standard recently reported.

When the researchers looked specifically at gender, they found a slightly stronger association between high fish consumption and lowered depression risk in men (20 per cent).

Among women, the associated reduction in depression risk was 16 percent.

The researchers pooled the data from relevant studies published between 2001 and 2014 to assess the strength of the evidence on the link between fish consumption and depression risk.

After trawling research databases, they found 101 suitable articles, of which 16 were eligible for inclusion in the analysis. These 16 articles included 26 studies, involving 150,278 participants.

The results appeared online in the Journal of Epidemiology & Community Health.

The Burin Peninsula Town of Grand Bank recently hired a consultant in an effort to secure its own Arctic surf clam quota from DFO.

In July, DFO announced the total allowable catch (TAC) for Arctic surf clam will be increased by almost 14,000 tonnes to 52,655 on the Banquereau Bank and Grand Banks starting with the 2016 fishery.

The increase automatically triggered the integrated fisheries management plan provision for new entrants in the fishery.

Nova Scotia-based Clearwater Seafoods currently holds the only quota for the species and processes the clams at its facility in Grand Bank. 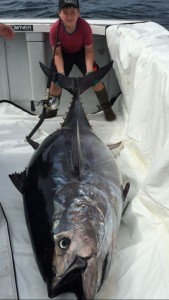 Koen Norton has done it again.

The 10-year-old P.E.I. boy who was featured in the October issue of The Navigator for landing a 486-pound bluefin tuna at the end of August, recently caught an even larger fish.

Norton, from Naufrage, on the northeastern end of the Island, nearly doubled his record last month by reeling in an 847.7-pound tuna on his dad Greg’s charter boat.

As it turned out, it was twice Norton’s height and about eight times his body weight.

It took Norton an hour and 35 minutes to land the massive fish, about half an hour longer than it took to bring in the tuna in August.

A part-time Gloucester lobsterman, Knott knew wire traps would be significantly more durable than the wooden traps that quickly corroded in the harsh sea environment. He also knew they would be lighter to lift out of the water but sink faster and stay put in the water.

Over several years, Knott worked to create a coating system that would protect wire from the harsh sea environment. He ultimately developed a two-step method to create the most durable trap wire: continuously galvanizing a complete roll of welded mesh (now referred to as galvanize after welding or GAW), followed with a PVC coating process that uniformly fusion bonded a thick coating of marine grade PVC outer coating to galvanize the substrate and thus protect the wire mesh from the extreme sub-sea conditions of the Atlantic Ocean. He named the product Aquamesh.

Knott built the first wire trap using Aquamesh, headed to Gloucester and spent years walking the docks of New England to convince fishermen that wire traps were better and would hold up longer than wood traps. In 1980, Knott opened Riverdale Mills (a former textile mill), and in December of that year sent the first shipment of Aquamesh to Maine. Aquamesh is now considered the industry standard material for lobster traps worldwide.

All Parts of the Cod Have Market Potential

Where the Buoys Are