A dockside ceremony was held at the vessel’s homeport in Dartmouth, Nova Scotia on August 29, where Parliamentary Secretary Darren Fisher and Halifax West Member of Parliament Lena Metlege Diab were joined by Andy Smith, Deputy Commissioner of Shipbuilding and Merial of the Canadian Coast Guard, and Gary Ivany, Assistant Commissioner of the Canadian Coast Guard. They were also joined by the vessel’s sponsor, Faith Scattolon, who joined Fisheries and Oceans Canada in 1981 and was instrumental in the development of the Oceans Branch and implementing the Oceans Act in the Maritimes. Scattolon took on the tradition of breaking a bottle on the ship’s bow to christen it. 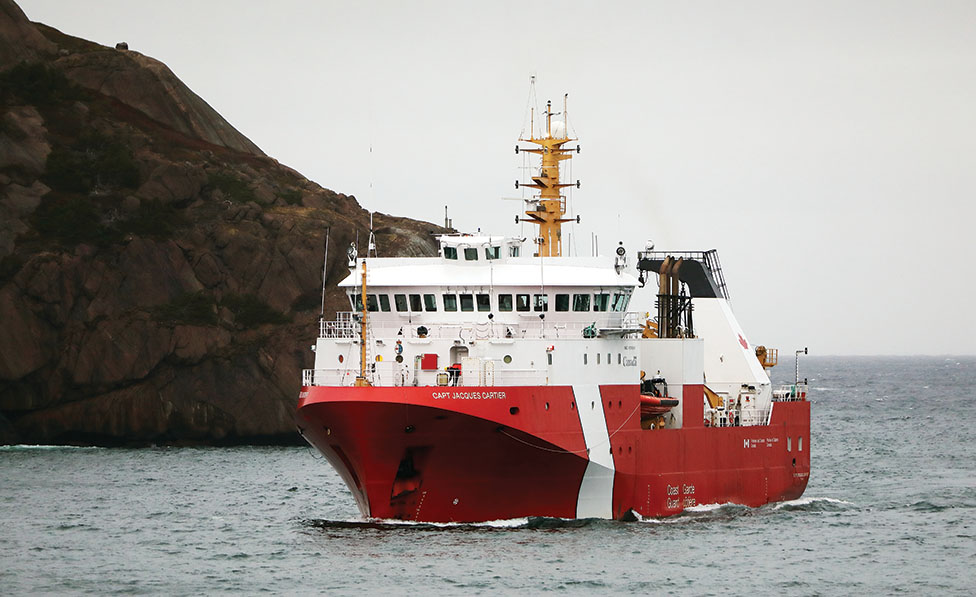 The vessel was named after Jacques Cartier, the 16th century explorer of the Maritimes and St. Lawrence River. The new offshore fisheries science vessel is equipped to support scientists in the collection and analysis of data on Canada’s marine ecosystems and the impacts of climate change. It features state-of-the-art systems, including high-tech fishing trawls and four science labs. In addition to its key science work, the vessel will also perform search and rescue, environmental response, maritime security and humanitarian missions.

The offshore fisheries science vessels are the first full class of ships to be delivered by Seaspan’s Vancouver Shipyards, as part of the non-combat package under the National Shipbuilding Strategy.

The Seaward Enterprises Association of Newfoundland and Labrador (SEA-NL) said it is joining Indigenous leaders in expressing disappointment that search and rescue (SAR) services for Labrador are not Ottawa’s highest priority.

“For as long as the entire Labrador coastline is void of a dedicated Canadian Coast Guard ship and a dedicated Cormorant helicopter to carry out primary SAR missions, the issue must top all agendas,” says Merv Wiseman, a member of SEA-NL’s executive, and outspoken advocate for stronger SAR services.

Indigenous leaders representing the NunatuKavut community council, and the Nunatsiavut government expressed disappointment following the minister’s visit at the lack of federal commitment to improved SAR services for Labrador.

SEA-NL said it passed a resolution at its founding convention earlier this year that Fisheries and Oceans Canada dedicate a primary Canadian Coast Guard vessel to Labrador and that National Defence assign a dedicated Cormorant helicopter to 5 Wing Goose Bay.

“SEA-NL will be calling on the Defence Minister to seize the opportunity that still exists to establish 5 Wing Goose as a legitimate search and rescue base for Labrador,” Wiseman said.

In a recent press release, the organization claimed that Canada is “dramatically behind” other nations when it comes to fighting human rights abuses in global seafood supply chains.

“One way to help tackle this is with boat-to-plate seafood traceability. This would help close market doors to fisheries that are not sustainable and rely on underpaid or mistreated workers by blocking the import of seafood products that cannot be traced back to a well-managed fishery.”

The federal government did pledge to implement boat-to-plate traceability for seafood back in 2019. And the government also recently enacted legislation to address the use of forced labour in Canadian supply chains. But according to Oceana Canada, “concrete progress has not been made on either commitment.”

“Canada has made the right commitments to improving transparency in our seafood supply chains, but without action, Canadians have no assurances that products of illegal practices are not still making their way into our country,” said Thurston. “Canada needs comprehensive legislation that ensures transparent, traceable seafood supply chains. This will have a direct impact on ending overfishing, mislabeling, and forced labour and unacceptable working conditions for seafood industry workers around the world.”

To get the government to take more action, Oceana Canada launched a petition titled, “Demand a stop to forced labour in Canada’s seafood supply chains.” The organization is calling on Canadians to sign the petition, which will go to the President of the CFIA, as well as the Ministers of Health, Fisheries and Oceans, Agriculture and Agri-Food, Trade and Labour.

The cause of an August 19 fire that destroyed the Machon Point Fisherman’s Co-op in Murray Harbour, Prince Edward Island remains unknown.

While the fire has been ruled accidental by the P.E.I. Fire Marshal’s Office, to date, a cause has not been determined due to the extent of the damage.

According to CBC, the fish plant was approximately 20 years old and housed the freezer, garage and icehouse for the co-op, which employed about 45 people at peak season. The co-op had insurance and there were no injuries reported from the fire.

Cooke Aquaculture recently acquired the large Tasmanian salmon farming company Tassal, which it has been tracking for several months.

Cooke announced that it has entered into a definitive agreement under which (via a wholly-owned Australian subsidiary) it has agreed to acquire all outstanding shares of Tassal for AUS $5.23 (£3.04) per share in cash.

With over 36 years’ experience, it employs over 1,700 people in Tasmania and Australia and farms 40,000 metric tonnes of Atlantic salmon and 5,500 metric tonnes of black tiger prawns for domestic and export markets including Asia, New Zealand and the U.S.

Tassal distributes salmon and prawns through its De Costi Seafood business in Lidcombe, New South Wales, Australia, where it also sources and processes a wide range of seafood. Salmon is offered as fresh deli-grade, fresh packaged and smoked for supermarkets. Prawns are distributed through supermarkets, delicatessens, and fish markets under the Tropic Co trademark.

CEO Glenn Cooke said, “Tassal is an excellent fit with Cooke, as we see many similarities between our two companies. Our people and communities are very comparable as well, with agriculture, fisheries, aquaculture and forestry prominently supporting export-driven economies. Our family-owned company is keen to have the opportunity to continue to grow Tassal from the strong base the employees, management and board have created.”

NOAA (National Oceanic and Atmospheric Administration) Fisheries issued an exempted fishing permit (EFP) to the Massachusetts-based Northeast Fisheries Science Center for the continuation of trials of on-demand gear in the American lobster fishery.

The EFP will allow for an exemption from federal lobster gear marking requirements for roughly 30 federally permitted commercial lobster vessels, with the potential to increase to up to 100 vessels total during the one-year project period.

NOAA wrote in a bulletin that the EFP will allow the participating vessels to test alternatives to vertical lines in trap/pot fisheries, including up to 30 vessels fishing in Atlantic Large Whale Take Reduction Plan Restricted Areas with no static vertical lines.

“In recognition of industry’s interest in grappling as a low-cost alternative to acoustic on-demand systems, this project would allow up to 25 vessels to fish via grappling to enable the Center to collect data on the viability of grappling at a commercial scale,” NOAA Fisheries wrote in an August 23 bulletin.

The project aims to expand the current trials of fishing systems that are trying to reduce the risk of entanglements of endangered North Atlantic right whales.

SeafoodNews.com recently reported that a nuclear-powered icebreaking container ship, which entered the port of Petropavlovsk-Kamchatsky in the Kamchatka region from Murmansk via the Northern Sea Route, returned to the Murmansk fishing port on August 11.

The ship, which carried frozen crab on the outbound trip, carried Alaska pollock on the return trip.

In response to sanctions such as the European Union’s ban on importing Russian marine products, the Antey Group of Vladivostok, a prominent Russian crab producer, used the route to transport approximately 670 tonnes of frozen crab from the Barents Sea to the Kamchatka region for the first time. According to SeafoodNews.com, it left Murmansk fishing port on July 8 and arrived in Kamchatka on July 21. It unloaded the crab on July 26 and 27 and left for the Murmansk fishing port on July 29.

On the return trip, Okeanrybflot, based in Petropavlovsk-Kamchatsky, a prominent Russian pollock producer, transported 550 tonnes of Alaska pollock to Murmansk for the first time.

Grieg Seafood has become the latest seafood company to separate itself from Russian-related businesses.

It recently announced that from the third quarter of 2022 onward, it will exclude feed ingredient raw materials originating from Russia in its salmon feed.

“It is still hard to believe that there is an ongoing war in Europe in 2022. The situation in Ukraine remains extraordinary and heartbreaking. We have nothing against ordinary Russians, but we do not want to contribute to the Russian economy as long as the Russian state is using their resources to wage a war in Ukraine,” Andreas Kvame, CEO of Grieg Seafood ASA said.

“This is first and foremost an ethical question. However, from a business perspective, it is also risky to keep Russian feed ingredients in our supply chains as consumers increasingly care about how the fish feed is sourced. Both the salmon industry, but also other animal protein industries, need to find feed raw materials with less risk elsewhere,” he continued.

The aquaculture firm credited BioMar, one of the first companies to publicly back out of Russia in March 2022, for its leadership in ending sourcing from Russia and Belarus.

“For suppliers who still source from these origins, the exclusion is based on a mass balance principle. In some cases, raw materials from new origins are introduced to accommodate the decision,” Grieg wrote in a news release.

The exclusion will also apply to feed ingredients from Belarus as the country has assisted in the Russian war efforts.

Campaign Highlights Companies with a Vested Interest in Sustainability

The Fisheries Council of Canada (FCC) has created a campaign to showcase how Canadian fishing companies have a vested interest in protecting the resource for generations to come.

Fishing for the Future highlights fishing companies who view long-term planning as more than just a good business decision, but as a way to support their families and communities.

“When we talk about the Canadian fishing industry, it can be difficult to imagine the individuals at its core,” said Paul Lansbergen, President, FCC. “This campaign allows us to show the human side of Canadian fisheries by profiling the boots on the ground who depend on the long-term dependability of their livelihoods.”

Two videos profile Icewater Seafoods out of Newfoundland and Labrador and the Qikiqtaaluk Corporation (QC) out of Nunavut. Icewater Seafoods is an eighth-generation family-owned cod business using fisheries science to ensure they can continue to support the community that’s come to rely on them and the Qikiqtaaluk Corporation is an Inuit birthright organization using Indigenous fishing and sustainability knowledge to create value from their waters and reinvest in growing their remote communities.

Why Has the Shellfish Market Fallen So Hard?