On the Waterfront — September 2016

The shuttered Ocean Choice International (OCI) fish plant in Port Union, Newfoundland has been handed over to the Municipality of Trinity Bay North.

The plant was closed in 2010 after being severely damaged by Hurricane Igor. At peak capacity, the plant employed more than 170 workers.

OCI said after six years without finding a way to reopen the plant, the company decided to transfer the plant over to the municipality at no cost. The company added that it has done more than $2 million in work to the building, about 30 per cent of what would be needed to restore it as a shrimp processing plant.

The Municipality has not specified what the plans for the plant will be, only stating that investors are interested in the property.

Police are reporting what appears to be the first recreational fishery-related fatality for 2016.

According to the RCMP, one man died and two others sustained injuries following a boating accident near St. Vincent’s, St. Mary’s Bay July 31.

The victim was identified as 65-year-old Eugene Francis St. Croix, of Peter’s River.

Three men, who were reportedly participating in the recreational groundfish fishery, ended up in the water in the area of the community’s breakwater after their small open boat overturned.

The RCMP members were called to the area around 9 p.m.

CBC was reporting that witnesses at the scene said the victim was wearing a life jacket but it wasn’t done up.

In the wake of Northern shrimp quota cuts, the Barry group announced last month it will not be reopening its plant in Clarenville, Newfoundland.

The plant normally employed about 100 workers during the shrimp season.

The Barry Group operates just two shrimp plants in the province. This season all the shrimp will be processed at its plant in Anchor Point, on the Northern Peninsula.

The workers are represented by the United Food and Commercial Workers (UFCW). The union has said it will be reaching out to federal and provincial governments to ask for help for the group.

NOAA Fisheries has determined that the porbeagle shark does not need protection under the Endangered Species Act at this time.

Both populations are at low abundance compared to historical levels, primarily due to overfishing. However, based on a comprehensive status review and an associated extinction risk analysis, it determined that listing porbeagle sharks under the Endangered Species Act as either threatened or endangered is not warranted at this time.

Over the last few years, larger numbers of porbeagle sharks have been observed North Atlantic waters, particularly off the coast of Newfoundland. 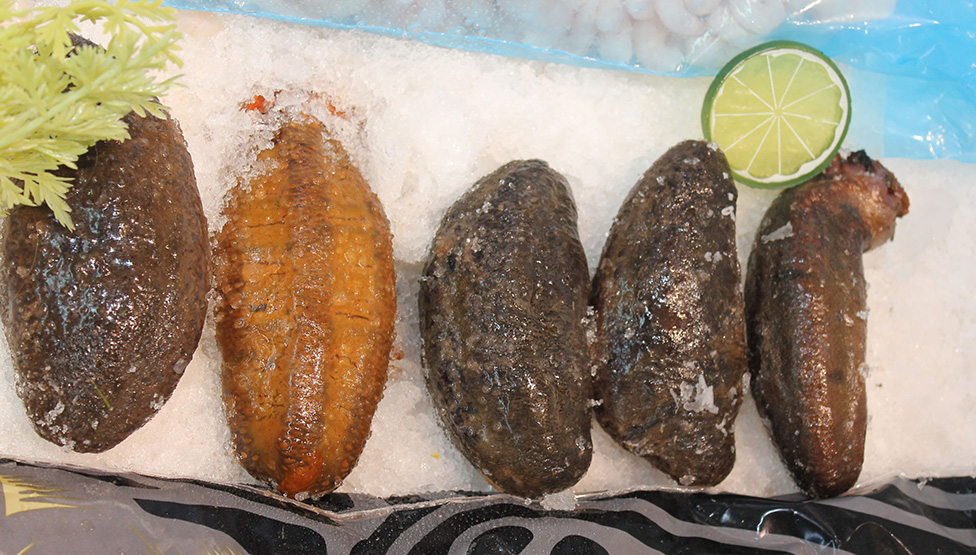 The Government of Canada provided the company with a $500,000 repayable contribution, through the Atlantic Canada Opportunities Agency’s Business Development Program (BDP), to help modernize the facility.

Extensive renovations included upgrades to the walls and floors. The company also acquired a new boiler, dryer, processing line, pump and drying racks. The enhancements will enable the company to increase the capacity of its cucumber drying operation.

Now that these updates are completed, Atlantic Sea Cucumbers Ltd. is undertaking the Canadian Food Inspection Agency accreditation process, allowing them to export their products to Asia. Once accredited, this will result in an increase of export sales of an underutilized species in Atlantic Canada. 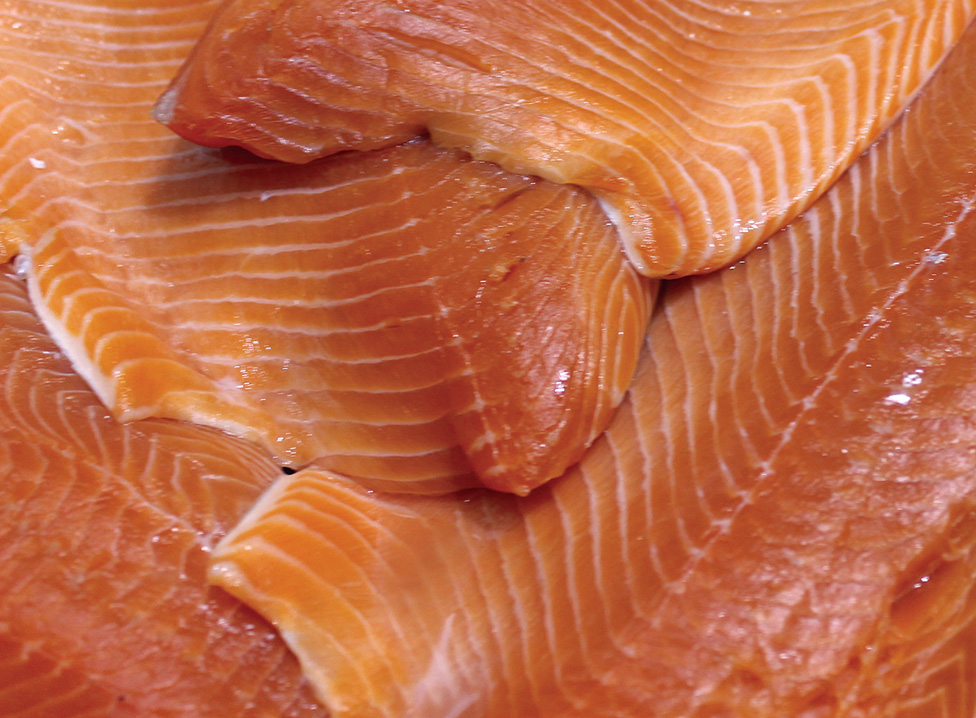 AquaBounty Technologies has initiated field trials of its AquaAdvantage genetically modified salmon in Brazil and Argentina.

Its genetically modified salmon have already been approved for sale in the U.S. and Canada, the group is now seeking other markets.

It said the market opportunity for its salmon remained strong, especially in light of the current restrictive limits on global Atlantic salmon farm production.

The group also announced it had purchased Snow Island’s Atlantic sea smolt plant in Rollo Bay West for use as a brood stock farm.

AquaBounty’s modified Atlantic salmon are crossed with the Chinook salmon, as well as genetic material taken from an eel-like species called the pout fish. The process means the salmon grow faster and shortens the farmed Atlantic salmon’s three-year growth cycle to just 18 months. 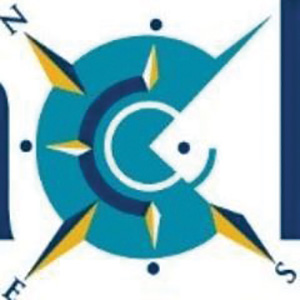 Halifax-based Binnacle Seafoods has achieved Chain of Custody Certification from the Marine Stewardship Council for its wild Atlantic halibut and other certified species.

Binnacle underwent a rigorous audit by an independent, third-party certifier who checked that the process and procedures the company has put in place meet the requirements of the MSC’s Chain of Custody protocols. The certification process reviewed how Binnacle maintained its chain of custody, starting with who Binnacle purchases from, to how Binnacle tracks each purchase, and identifies, segregates and maintains certified inventory.

“We understand how important the MSC certification is to our suppliers and our customers who purchase our seafood,” said Nevin Harrington, Owner and General Manager of Binnacle. “We have worked diligently to become MSC certified and we are thrilled to receive this globally recognized designation.”

Binnacle sells its halibut to customers in markets across the U.S. In addition to Atlantic halibut, the company also sources and imports a wide variety of premium fresh and frozen products, both wild and farmed, from around the globe. Binnacle’s core product offerings include, but are not limited to, Atlantic halibut, Atlantic salmon, Arctic char and wild salmon. 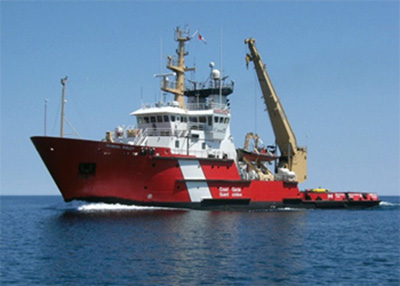 The federal government recently announced that a $3.6-million contract has been awarded to Newdock — St. John’s Dockyard Ltd., for important refit and maintenance work on the Canadian Coast Guard Ship (CCSG) Samuel Risley.

The CCGS Samuel Risley is an icebreaker and buoy tender based in Parry Sound, Ontario, normally operating in the Great Lakes. The Risley has a capability to break ice up to two feet thick.

Work on the Risley began in June 2016 and is scheduled to be completed by September 2016.

Main vessel work includes replacement of the bow thruster, a crane overhaul and a recoating of the hull. The galley will also be refurbished and various pieces of equipment onboard the vessel will be inspected.

Following a request made by the Town of Cottlesville on behalf of plant workers in the area, former employees of the Breakwater Fisheries Ltd. plant in Cottlesville have been deemed eligible for workforce adjustment measures by the Newfoundland and Labrador Cabinet Committee on Fisheries Issues.

The plant has not operated since December 2014. 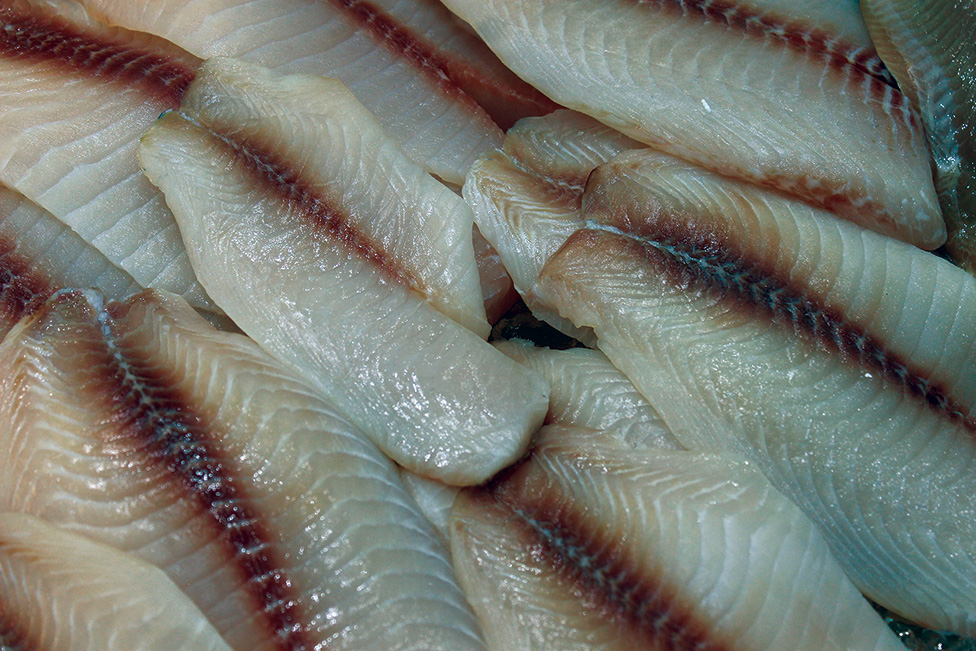 “Under the Integrated Transition Framework for Displaced Plant Workers our government is committed to helping individuals and communities overcome the closure of fish plants, which often serve as the largest single employer in a rural community. The transitional supports we are making available to these workers will enable them to access services to help them participate in retraining or skill development for future employment opportunities,” said Steve Crocker, Minister of Fisheries and Aquaculture.

The Integrated Transition Framework for Displaced Plant Workers is a multi-departmental program established to respond to communities and individuals impacted by fish plant closures. It provides one-time transitional employment assistance and offers participants access to transitional counselling services to better prepare for future employment opportunities. Further details are provided in the chart below.

“We understand this is a challenging time for people in the region impacted by the closure of the fish plant in Cottlesville. Through programs such as the Fish Plant Worker Employment Support Program, along with economic development and career counselling services, our government will help support workers in their efforts to find new employment opportunities which enhance the economic and social development of their communities,” explained Eddie Joyce, Minister of Municipal Affairs.

Information sessions for affected workers will be held in Cottlesville in the coming weeks. For more information about the Integrated Transition Framework for Displaced Plant Workers visit www.fishaq.gov.nl.ca/industry_renewal.

An assessment to be conducted this summer of the MV Manolis L, a shipwreck in Notre Dame Bay off the coast of Newfoundland and Labrador, will inform the development of Canadian Coast Guard plans for the recovery of the vessel’s cargo of an estimated 462 tonnes of fuel, 60 tonnes of diesel and removal of the vessel.

The contract valued at $5 million awarded to Resolve Salvage of Fort Lauderdale, Florida, was announced last month by Dominic LeBlanc, Minister of Fisheries, Oceans and the Canadian Coast Guard and Judy M. Foote, Minister of Public Services and Procurement.

Coast Guard Environmental Response officers have been conducting regular site visits to survey the hull of the shipwrecked vessel, check containment seals and remove any oil collected by a cofferdam. The monitoring plan also includes aerial and on water surveillance to look for any signs of oil pollution and continued monitoring by Coast Guard fleet vessels. 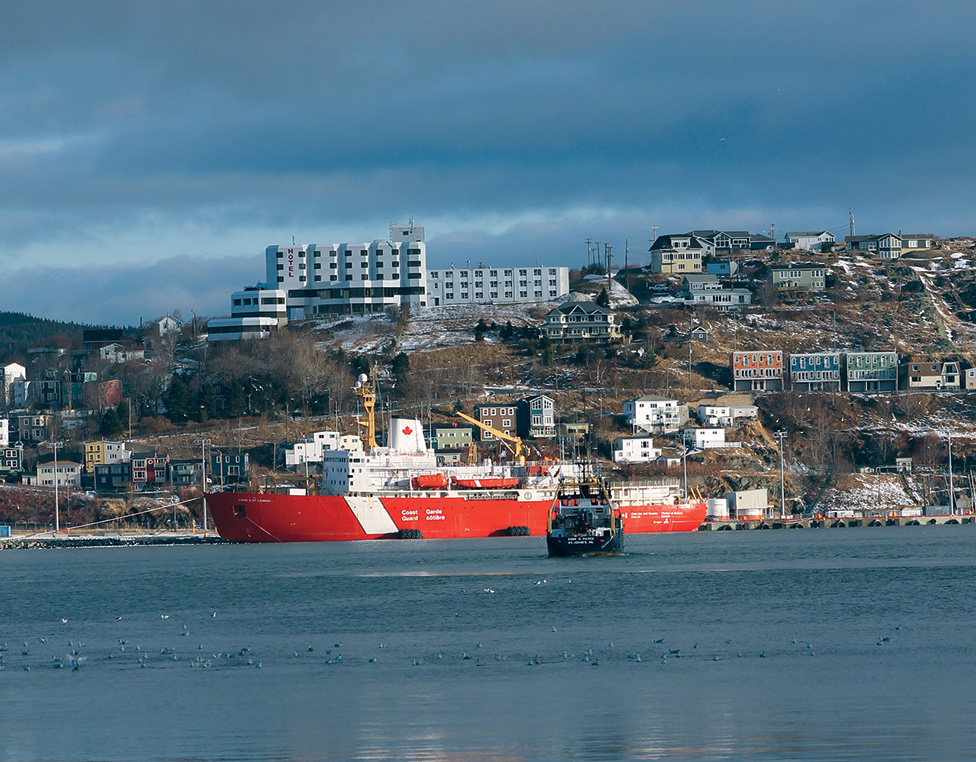 The Canadian Coast Guard’s Arctic operations are now well underway for the 2016 season.

The Centre will operate until December 30, 2016 in order to assist and support vessel traffic in the Arctic. Outside of these dates, the Northern Canada Vessel Traffic Services (NORDREG) is provided from the Prescott MCTS, which also provides a year-round satellite safety information broadcast service for high Arctic waters.

Eight Canadian Coast Guard (CCG) icebreakers will be deployed throughout 2016. Planning priorities for the 2016 Arctic operations are: escort and icebreaking for commercial vessel traffic, icebreaking in support of community resupply and navigational aid maintenance. CCG is currently finishing up with these operations in the lower Arctic and will be repositioning icebreakers to the high Arctic and the Northwest Passage in the coming weeks.

In order to carry out the 2016 season’s planned activities, the following Coast Guard Ships have been deployed:

In addition, the CCGS Amundsen departed Quebec City on June 3, embarking on 125 days of dedicated scientific programming with ArcticNet, from Laval University.

Coast Guard will collaborate with the Canadian Hydrographic Service (CHS) to support its work in Arctic surveying and charting, using state-of-the art multi-beam sonar systems, to significantly increase the amount of sea floor surveyed in the Arctic. Two projects in particular will once again be supported in 2016: the Galway Project — collecting seabed data in the North Atlantic and Eastern Arctic Ocean and the United Nations Convention of the Law of the Sea (UNCLOS) project — collecting seabed data along Canada’s extended continental shelf in the Arctic Ocean.

The Coast Guard will continue ongoing collaborations with Natural Resources Canada, the Royal Canadian Navy, Parks Canada, as well as international agencies, researchers and other partners.

No Replies to "On the Waterfront — September 2016"