On the Waterfront — September 2019

The Minister of National Revenue, Diane Lebouthillier, on behalf of the Minister of Fisheries, Oceans and the Canadian Coast Guard, Jonathan Wilkinson, was in Cap-aux-Meules recently to participate in the official commissioning of the new high endurance, self-righting search and rescue lifeboat, named CCGS Baie de Plaisance. 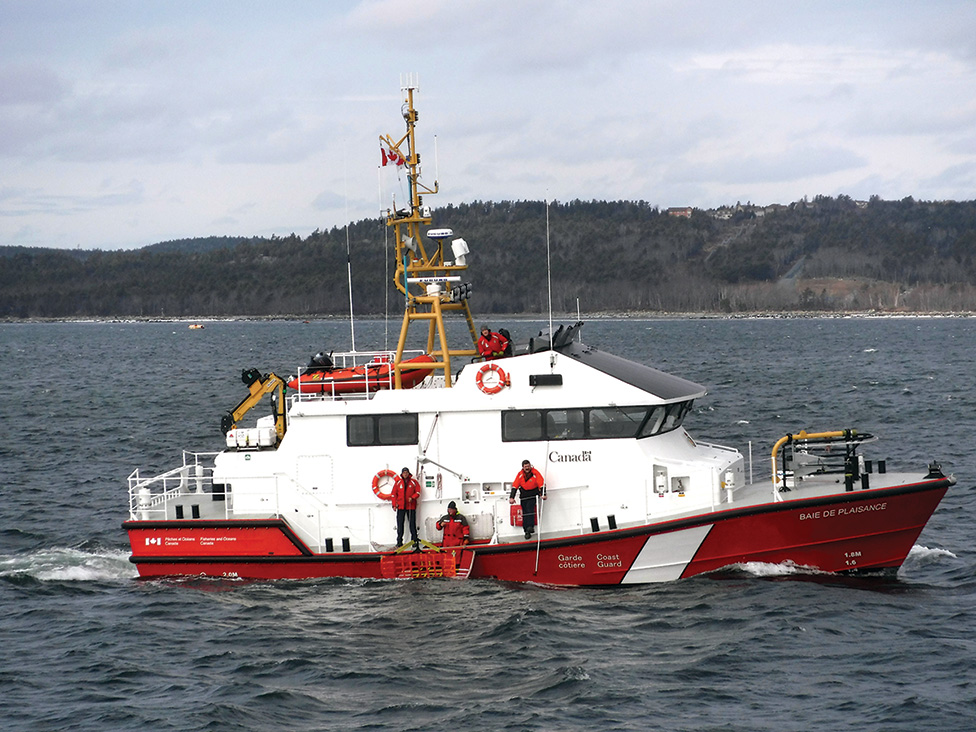 The vessel was built by the Forillon shipyard and delivered to the Coast Guard in November 2017. To date, five of these 20 new lifeboats have been delivered, built as part of the National Shipbuilding Strategy (small vessels) and the Fleet Renewal Plan.

As part of the Oceans Protection Plan, the minister also announced the delivery of new emergency tow kits and nearly 35 new pieces of environmental response equipment to be deployed across Quebec to ensure that the Coast Guard has the necessary tools and equipment to protect mariners and the marine environment.

Emergency tow kits will be installed on the icebreakers CCGS Amundsen, CCGS Des Groseilliers, CCGS Pierre Radisson and CCGS Martha L. Black, which are all based in Quebec City. The new environmental response equipment consists of a set of beach steps, curtain booms, parallel generators with connectors, a generator, a portable skimmer and sorbent kit.

The Government of Canada has awarded contracts, each to build 10 boats, to the Forillon shipyard in Gaspé, Quebec and to Hike Metal Products in Wheatley, Ontario. The total investment for the new lifeboats is over $160 million (including taxes) and has created and supported more than 35 jobs.

As part of the government’s ongoing efforts to protect the endangered North Atlantic right whale, Department of Fisheries and Oceans (DFO) fishery officers and members of the Canadian Coast Guard spent three days searching for and retrieving lost fishing gear, known as ghost gear, from the Gulf of St. Lawrence. 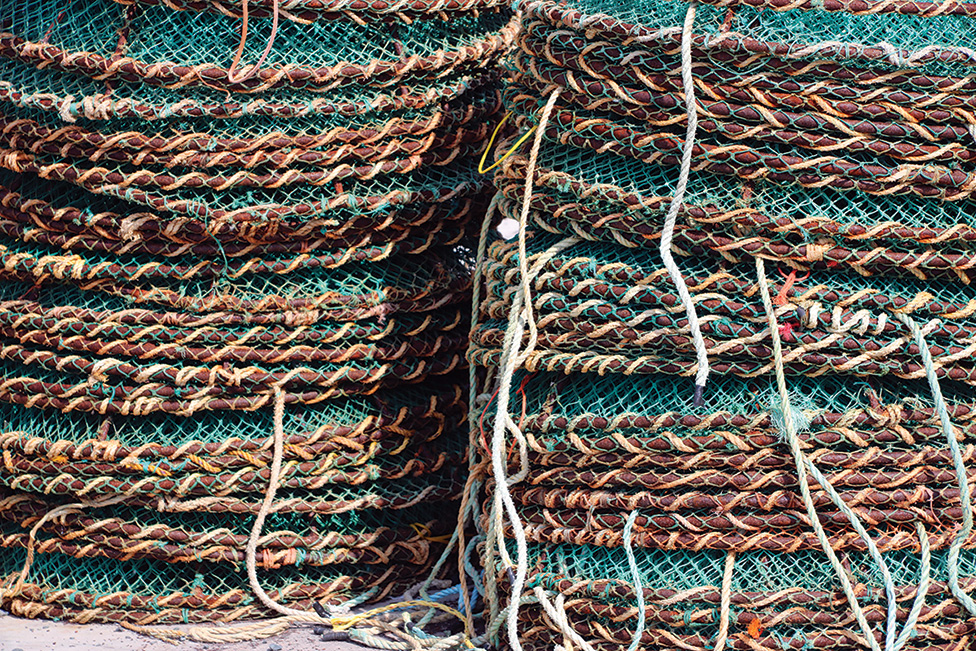 Over the three-day mission, 101 lost snow crab traps were recovered throughout the Gulf of St. Lawrence, removing over nine kilometres of rope from the water. Along with preventing entanglements, removing ghost gear from the water contributes to the conservation of fisheries, as the gear traps marine species that would otherwise form part of a fishery’s regular catch.

The operation focused on the areas of the Gulf of St. Lawrence where the most gear was reported lost or missing by responsible fish harvesters. Since 2018, harvesters in the southern Gulf of St. Lawrence have been required to report lost gear and there have been over 1,000 reports of lost fishing gear this year. Fishery officers will return any legal fishing gear that was reported lost, but all unreported gear will be held pending investigation, which may lead to charges.

DFO has been working with industry on an ongoing basis to encourage fish harvesters to undertake ghost gear removal initiatives in conjunction with local DFO fishery officers.

Every year, an estimated 26 million tonnes of caught fish is unaccounted for.

The Minister of Fisheries, Oceans and the Canadian Coast Guard Jonathan Wilkinson recently announced Canada’s ratification of the Agreement on Port State Measures to Prevent, Deter and Eliminate Illegal, Unreported and Unregulated Fishing. This international agreement, which entered into force for Canada on July 20, sends a strong message that Canada will not tolerate IUU fishing, and will protect the honest good work of Canadian fish workers.

Since all fish must come through a port before going to market, limiting port access is one of the most efficient and cost-effective ways to eliminate IUU fishing.

There is international momentum building to help solve the global issue of illegal fishing. The ratification of the Port State Measures Agreement is one of the many ways the Government of Canada has demonstrated its commitment to end illegal fishing. 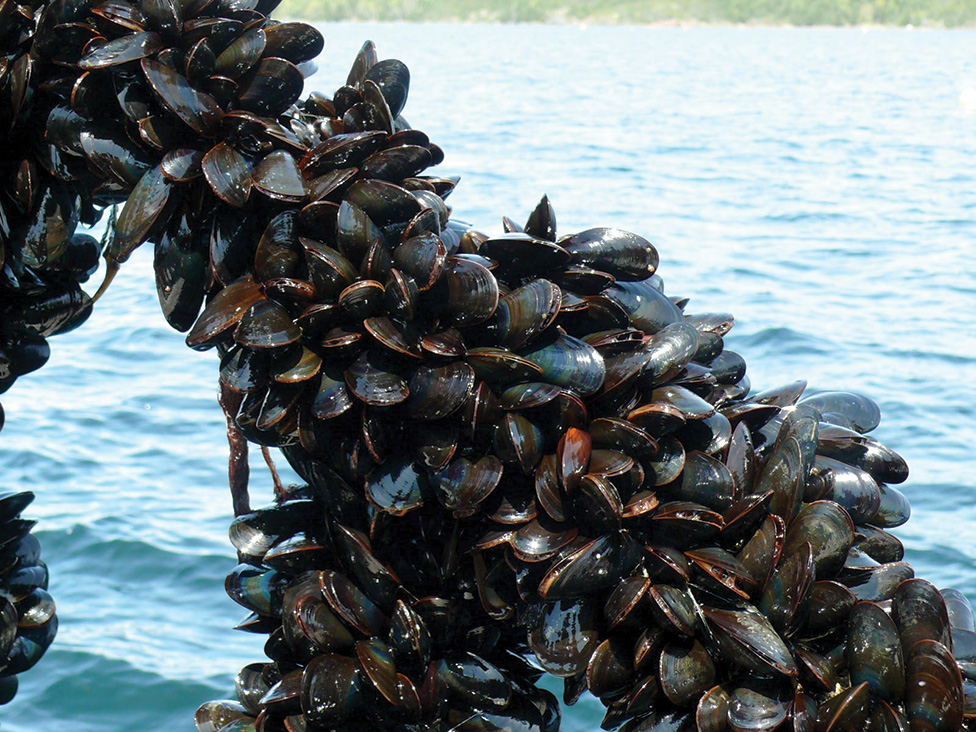 P.E.I. Mussel King, a company that has been farming mussels on Canada’s East Coast since 1978, recently received $49,000 in funding through the Canadian Agricultural Partnership’s AgriMarketing Program.

The funding will support the company as they work on export development opportunities, including attending food expos like Seafood Global Brussels and Seafood Expo North America. The company hopes that by attending these food shows it will be able to increase demand for Canadian mussels.

“The demand for Canadian seafood is growing right across the world and the Government of Canada is committed to support great industry leaders like P.E.I. Mussel King in their efforts to expand global markets for their world-class seafood,’ said Lawrence MacAulay, Minister of Veteran Affairs, who was acting on behalf of Marie-Claude Bibeau, Minister of Agriculture and Agri-Food.

“The agriculture and agri-food sector is a key driver of our economy, and creating new export opportunities will help us reach our goal of increasing Canadian agri-food exports to $75 billion annually by 2025 and put more money in the pockets of our exceptional food producers, such as P.E.I. Mussel King.” 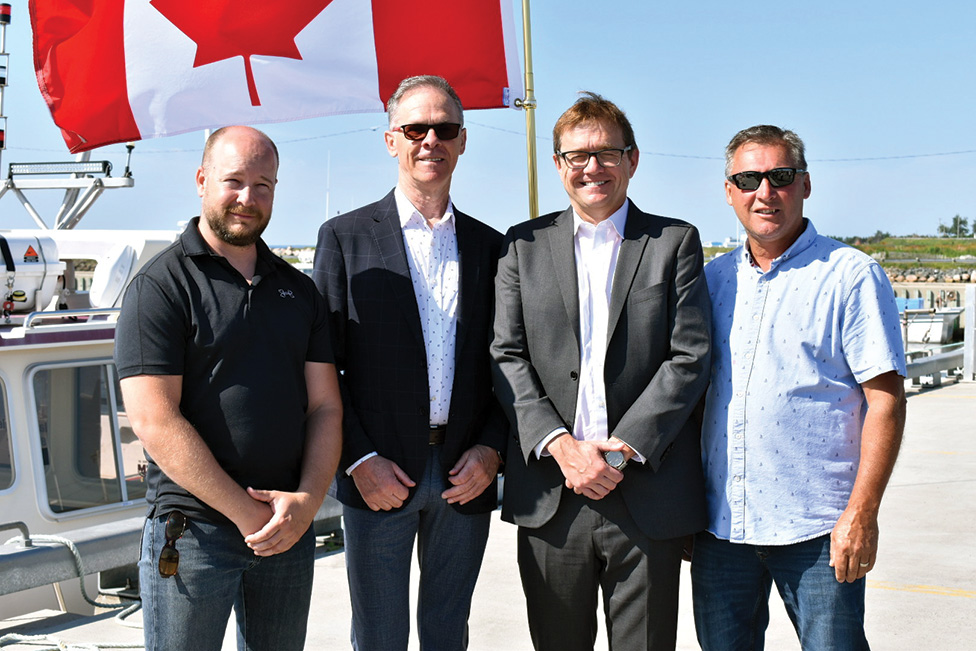 Preserving the Independence of the Inshore Fleet

The federal government recently announced that new measures that will ensure that key policies relating to owner-operator and fleet-separation policies are being enshrined in regulation under the revised Fisheries Act.

The owner-operator policy requires fish harvesters to fish their licences personally, so that those who actively fish receive the benefits from their licences. The fleet-separation policy maintains a separation between the fishing and fish processing sectors.

Maintaining the independence of small-boat owner-operators and implementing a fair licensing regime will help protect middle-class jobs and ensure the long-term sustainability of the fishery.

In addition to providing enhanced protection for the inshore fleet, the new Fisheries Act will provide enhanced protection of fish and fish habitat and will assist in fostering a more sustainable fishery. Inshore refers to the fishing sector where fish harvesters are restricted to using vessels less than 19.8m (65’) Length Over All (LOA) or less than 27.4m (90’) LOA in Newfoundland and Labrador.

Prior to the 1960s, fisheries on Canada’s East Coast were open to anyone who wished to fish, with no restrictions on who could hold a license.

In the late 1970s, concerns from inshore harvesters began to arise in response to the proliferation of fish processing plants that were acquiring vessels and registering them for the inshore fishery, which had the effect of increasing the overall concentration of inshore licenses into corporate hands and forcing the individual independent license holder out of the fishery. 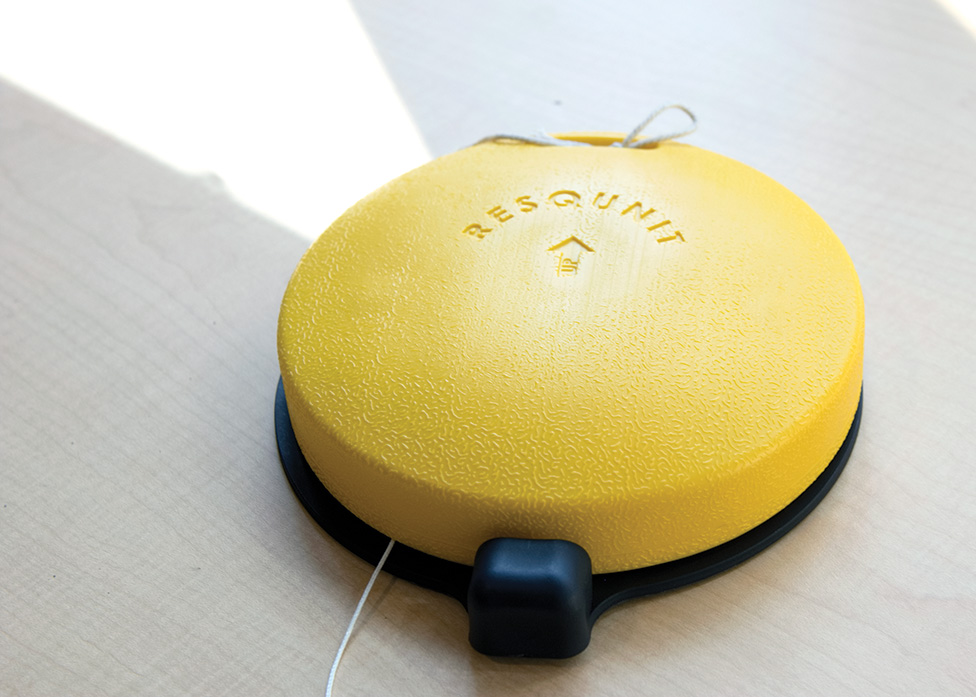 A venture founded in Norway in November 2017, Resqunit is a floatation device that secures fishing gear, such as lobster traps and crab pots. When a trap gets lost, and remains under water for a period of time, the Resqunit is released, floating to the surface — saving expensive gear, hard sought-after fish stocks and protecting marine life that are often stuck inside these ghost traps.

“Resqunit was developed in order to reduce the significant economic losses that can occur for both hobby and professional fishermen when they lose their valuable gear,” says Helge Tretto Olsen, Resqunit’s CEO who was in Dartmouth for the launch.

“The bigger picture is that it also protects our ocean floors and marine life by reducing the number of ghost traps and fishing gear that threaten fish, crab and lobster stocks along global coastlines. Knowing Canada’s global position as a fishing leader, we are confident that Resqunit will be embraced by the industry here.”

“Fishing is such a huge part of our past and current history, not just in Nova Scotia but Atlantic Canada wide and beyond,” says Nobbe. “The support from government, industry and investment pillars within the region has been unbelievable to date which was of no surprise to me after working in the space for more than a quarter of a century.”

Nobbe notes that the launch of Resqunit in Canada comes at a time when many are focusing on the oceans and the precious resources at stake — between the North Atlantic right whale entanglements to protecting the ocean floors from further ‘ghost gear’ occurrences. He believes that the increased awareness around these issues, in combination with the simplicity, functionality and low price point of the device to rescue lost gear, will appeal to fishers in both the lobster and crab industries.

“Our people have lived and flourished on the shores of the Bras d’Or Lakes for over 13,500 years, sustainably living and producing food in and around the Lakes for generations,” We’koqma’q First Nation Chief Rod Googoo explained.

“The Cooke family business shares our belief that aquaculture can be developed in a manner that protects and preserves the environment for future generations. We believe this relationship with Cooke Aquaculture will help us further develop our Bras d’Or Lakes grown steelhead trout into a recognized brand, enhancing our economy and creating opportunities for our community for years to come.”

“We’koqma’q First Nation has shown leadership among First Nations in its approach to commercial fishing, and we look forward to sharing our best practices to further support We’koqma’q in becoming a leader in aquaculture fish farming development,” said Glenn Cooke, CEO of Cooke Aquaculture Inc. “We’re looking forward to a collaborative and productive relationship that will bring this world-class steelhead trout product to consumers.”

Harvesting and marketing of the Bras d’Or Lakes grown steelhead trout was to begin on July 15 of this year.

The Federation of Independent Sea Harvesters of Newfoundland and Labrador (FISH-NL) has serious concerns over a proposal by the Anglican Cathedral of St. John the Baptist to construct an annex adjacent to the church that could disturb the burial ground of thousands of migrant fishermen.

Further, FISH-NL says at the very least a memorial to their memory should be erected on the site.

“Newfoundland and Labrador was built on the fishery and the life and death of potentially thousands of migrant fishermen and their contribution to our development as a culture and society should be recognized,” says Ryan Cleary, President of FISH-NL. “At the very least they deserve our respect.”

Retired Memorial University history professor Robert Sweeney has estimated that between 5,000 and 15,000 fishermen (mostly young men, between the ages of 14-24) from the West Country of England could be buried in the cemetery.

Sweeney has described the cemetery in downtown St. John’s as “the largest pre-Confederation cemetery of wage earners in Canada,” with most of the fishermen buried there having died from injury or disease dating back to the 17th century.

The proposed annex would be built next to the historic cathedral to house a parish hall, offices, a café and space for community outreach work.

According to the N.L. Heritage website, “even by Elizabethan times, the Newfoundland fishery was highly regarded as a national resource and was highly prized as an activity that trained men and boys to the sea, ‘a nursery of seamen.’ Throughout the southwest of England, the overseas cod fishery became an established industry and migration to Newfoundland became a major cultural tradition.”

The Gael Force Group has officially established a base in Grand Falls-Windsor, Newfoundland and Labrador, to serve aquaculture producers in the province and across Atlantic Canada.

The new Canadian company base is on Maloney Street in Grand Falls-Windsor, immediately off the Trans-Canada Highway. From there, Gael Force will be supporting its customers with sales and technical service, product development, moorings design and assembly, pen building, cameras and feed system installations and technical support for fish farm site installations.

Gael Force is currently building feeding barges in Atlantic Canada, designing and supplying mooring systems, feed cameras and other technology equipment for new sites in Newfoundland and Labrador, and along with that aims to support the existing fish farming site infrastructure for all producers.

The supplier is already supporting new business established earlier this year in Atlantic Canada as it provides service to Mowi as it grows its operations.

Stephen Divers, business development director at Gael Force, is encouraged by the aquaculture industry in Newfoundland and Labrador.

“Aquaculture has the potential to transform rural economies and we have seen first-hand how this has happened in Scotland over the past 30 years. The similarities between Newfoundland and Labrador, and the Highlands and Islands of Scotland give us tremendous confidence that aquaculture can be transformative for the area.”

No Replies to "On the Waterfront — September 2019"