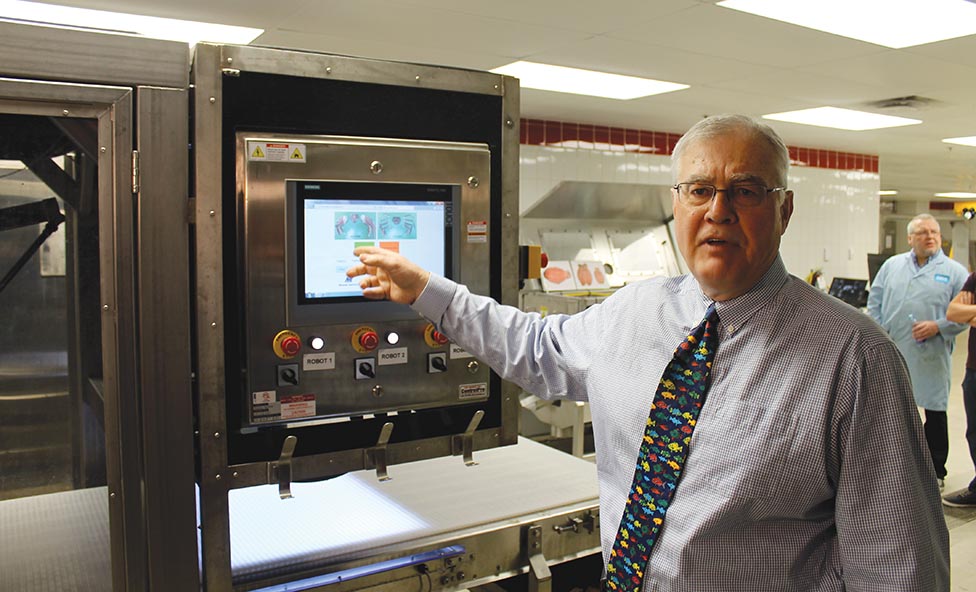 The first patent has been issued and more are pending for a Newfoundland and Labrador-designed robotic system for butchering snow crab.

“The U.S. patent is the first one and we expect it to be patented in other jurisdictions,” said Robert Verge, managing director of the Canadian Centre for Fisheries Innovation (CCFI) in an interview. “We’re basically patenting it anywhere there might be a crab or large bodied crustacean that the system might be suitable for.”

The processing system, that was unveiled in 2017, is a collaborative effort between the CCFI, the College of the North Atlantic (CNA) and the Marine Institute’s Centre for Aquaculture and Seafood Development (CASD).

“What we’ve patented is one third of an overall system that we’ve been developing,” said Verge. “It’s an automated system to extract meat from snow crab but we also think that system can be adapted to other large bodied crustaceans including lobsters.”

“The first piece is a high-pressure processing unit that we just purchased. It is in reasonably common use in the lobster sector these days. It’s not something we developed.”

The high-pressure system essentially applies high pressure to the crab which compresses it, said Verge. “When the pressure is released the crab springs back but the shell and the meat spring back at different rates, so you get a very clean separation between the meat and shell” which helps to extract the meat. In existing systems where the crab is cooked then plunged into cold water “it sort of achieves the same effect except you don’t get as clean separation between meat and shell,” said Verge.

Verge said the hope is to have the prototype built and tested in the next year or so. 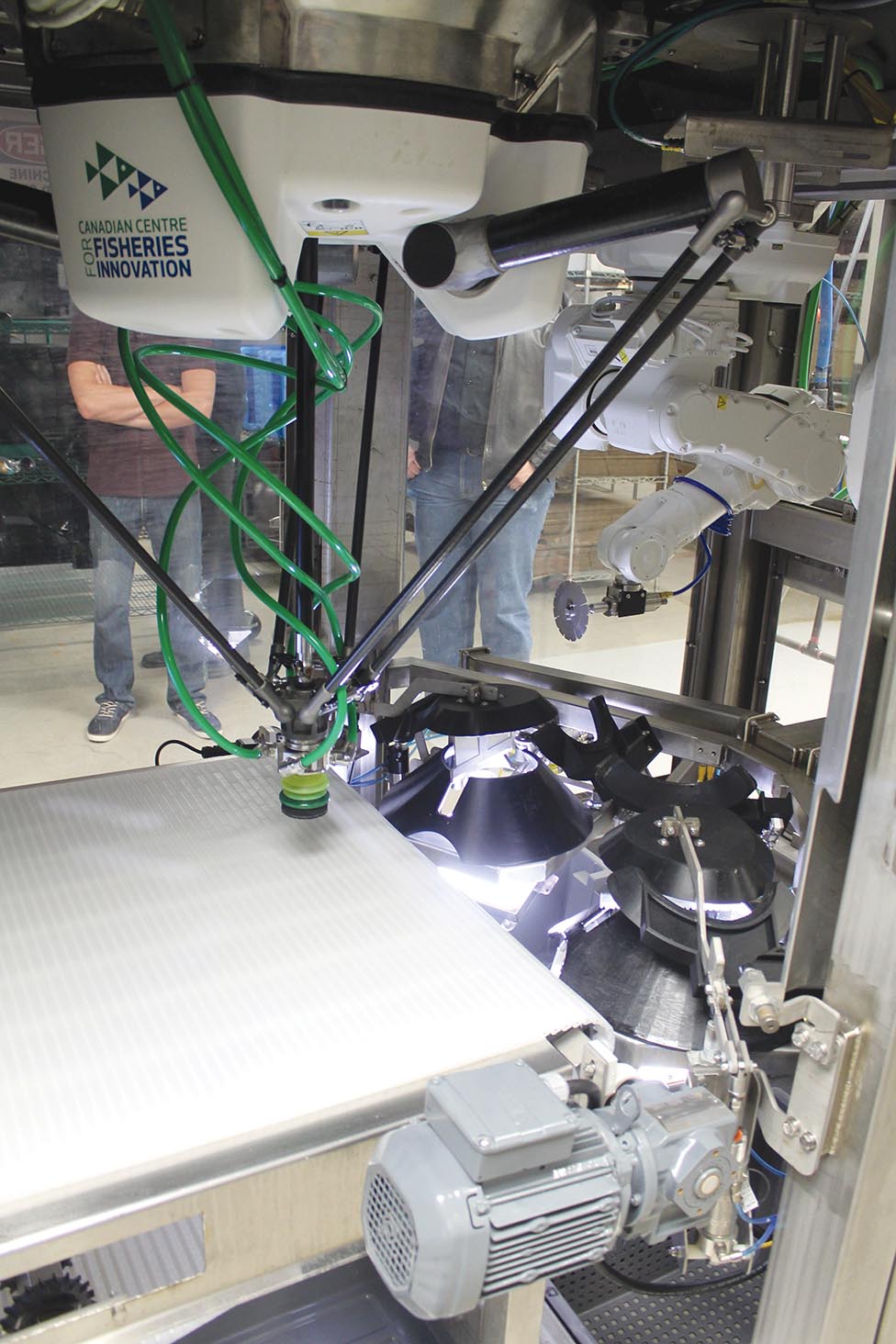 “We would expect to patent that as well,” he said. “We’re not at that stage yet. We have to build and test the prototype and be satisfied it will do what we want.”

More value for crab and job creation will be two of the paybacks for the crabbing industry if the project is successful. “What we are aiming for is to get more value out of our crab by selling a meat product instead of the sections with the meat still in them,” said Verge.

“We felt when we got into this, there was a bigger market for just meat, so we thought we could open up more market opportunities by selling a meat product and because of the process that we have chosen, it would be a very high quality meat product which I think would allow us to get some extra value. It is a non-thermal process” producing a raw product as opposed to the existing crab sections which are essentially a cooked product, he said.

Years ago, Newfoundland and Labrador processors did extract meat from crab manually, but it was so labour intensive over time it became uneconomical.

“The labour cost extracting meat was too high relative to the extra value you could get so the industry evolved towards producing sections with the meat left in the shell. Some of those sections are called retail sections and are sold to stores and restaurants,” said Verge.

“The retail sections tend to be the better-looking crab. There are also sections that get produced that are less presentable, they might have barnacles or missing a limb or some imperfection that makes them less suitable for a retail product so those have been sent off to China for meat extraction with the meat going to Japan.” 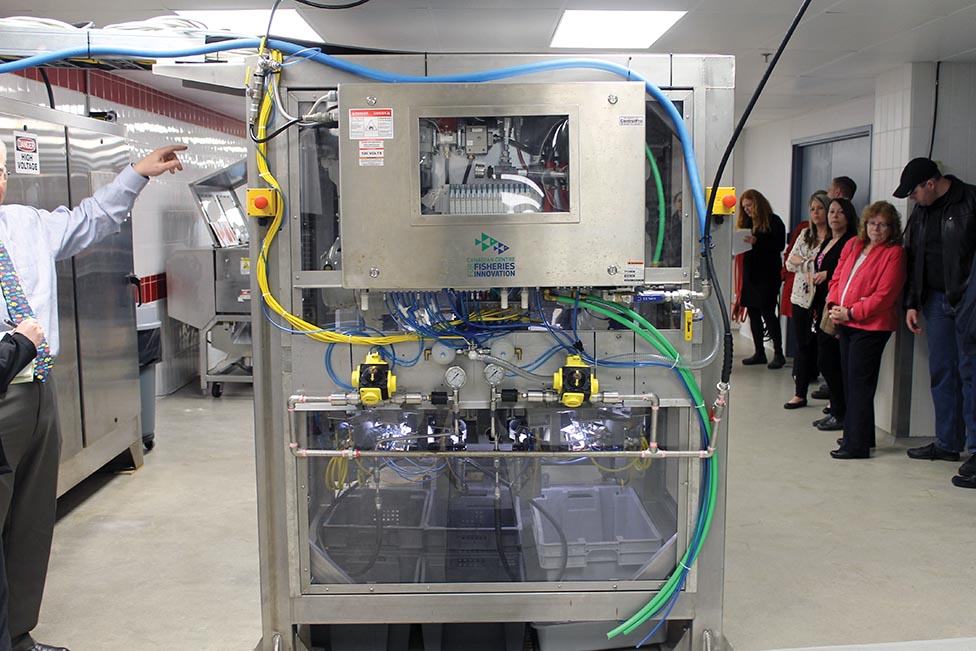 Verge said its been “25 years or more since we did extracted meat product of any quantity in Newfoundland and even in New Brunswick for that matter. Those jobs were lost a long time ago. If any jobs are threatened by what we are doing they’re not jobs in Canada, they are jobs in China. We’re essentially going to bring back meat extraction” turning out a raw meat product expected to be attractive in the market.

Jobs created would employ people operating the robotic machines that do the meat extraction. “It would be a different type of job and by and large a highly skilled job that we think will pay fairly well,” said Verge.

There are a few robots in use in fishing industries in other countries, said Verge. “By and large they just pick up something and put it somewhere. They’re not doing the kind of complicated tasks we have these robots doing so this is really a world first that we’ve pulled off here. The other thing through the work we have done we’ve become more familiar with robotics and we see a good many other applications we could use them for in the industry, so we think this is not just a significant milestone in terms of processing crab. We think this is a significant milestone in the way fish are going to be processed in the future as well.”

Verge added that fish plants in Atlantic Canada are suffering from labour shortages. “I think if we can develop additional robotic applications it will help them increase the productivity of the people they do have. It’s not so much replacing people. The people aren’t there, so we need to make the people who are remaining in the industry more productive by giving them better technology and better tools to work with.”

It Must Have Been Really Quick - Part II