Quality is a topic I have discussed many times in this column.

Specifically, I have talked about consumers’ expectations of quality, the fact that we don’t meet those expectations consistently and the additional fact that many harvesters don’t do what is needed to provide good quality raw materials to plants.

Last month, I suggested that, in failing to provide good quality raw materials, harvesters were simply responding to the price signals sent by processors, most of whom are willing to pay whatever price is needed to attract a supply of raw material and often tolerate poor quality, due to their need to keep plants operating and cover overhead costs.

I have been involved in the fishing industry over 30 years now. During that time, I have done a lot of work on quality issues and several things have amazed — and saddened — me about industry attitudes toward quality. One is that raw material prices are not a mechanism for encouraging behaviour that would make everyone better off. That is in contrast to every other industry I know anything about. Another is that, because there is little connection between quality and raw material prices, harvesters seem to have no idea how much money we lose in the marketplace. 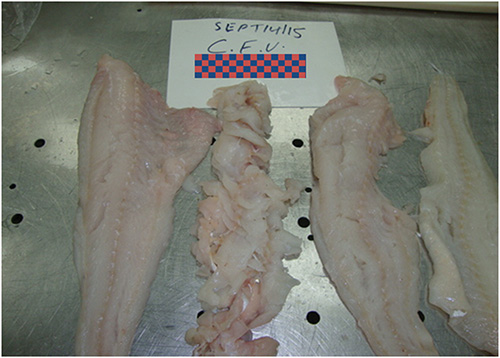 How much do you think a buyer would be willing to pay for these fillets, cut from fish landed in September, 2015?

We live in a market economy, in which decisions about investment, production, distribution, and prices are based on the ongoing interaction of supply and demand. In such an economy, price is a very powerful tool for motivating consumers and their suppliers. If prices are high, it generally indicates strong market demand and encourages expansion of supply. If prices are low, it indicates either weak demand or excess supply and reduces willingness to supply. As this indicates, price is a very strong signal indicating what the market wants.

Let’s be very clear. The market offers higher prices for better quality fish products — sometimes a lot higher — so it is sending the right signals. In some cases, the higher price comes from being able to sell a top-quality product to a buyer willing to pay a high price for it, such as a restaurant that specializes in fine dining. In others, it is because different suppliers have different reputations for quality.

Those having a reputation for good quality are able to attract better prices for products very similar to ones sold by suppliers whose reputation is not as good. If their quality is known to be poor, suppliers simply don’t have access to buyers willing to pay high prices, because the buyers don’t want to deal with them at all. Unfortunately, these quality-based differences in market prices seldom get translated into different prices at the dock here in Atlantic Canada.

It’s not because buyers or processors get the price premium and keep it, instead of passing it on to harvesters. It’s because the buyers and processors buy a mixed bag of fish, some good, some mediocre, and some bad. They pay an average price for that mixed bag, so the harvesters who provide good quality don’t get rewarded for it. On the other hand, those who provide poor quality don’t get penalized, either.

In effect, the ones who do a good job subsidize the slackers. As I discussed last month, excess capacity forces buyers and processors to behave this way, because they need the supply of raw material. Low-value products can help cover overhead costs and make debt payments, even if they don’t provide a profit at the bottom line.

In October 2010, consultants Gardner Pinfold presented a report to the Lobster Council of Canada titled, Long Term Value Strategy for the Canadian Lobster Industry. In it, they make the following observation:

“Shore prices are set competitively in response to volume buying by shippers and processors. Price levels are sensitive to general market conditions, but the signal they send fails to influence either quantity or quality. In other words, as much comes out of the water at low prices as high prices. Also, price has no influence over quality because competition frustrates any attempt to set prices that differentiate on the basis of quality.”

As this indicates, normal economic principles do not apply. Similar statements can just as easily be made in relation to other species, as well.

People in the industry know this. But they also know that markets value quality, so everyone promotes the idea that they produce only the best quality, despite plenty of evidence to the contrary. Processors tell buyers about their attention to quality. And harvesters adamantly deny that they provide anything but the best quality, insisting they have no trouble selling their catches.

At least the part about not having trouble selling their catches is true — but it isn’t necessarily because they provide good quality.

When all is said and done, no one is fooled. Everyone is in denial about the reality, despite the fact that everyone loses money because of it. As I have said before, it’s not money we take out of our pockets and spend; it’s money that has never had a chance to go into our pockets in the first place.

As we contemplate building a new industry based on cod, this has the potential for disaster. With cod, the low-value products are blocks, destined to be cut into rectangles and squares that are battered and/or breaded and sold as fish sticks or burger patties to buyers who are typically very price-sensitive and want to buy them as cheaply as they can. These were the mainstay of our groundfish industry in Atlantic Canada for decades, at times making up over 80 per cent of our output.

That was one of the main reasons our industry effectively went bankrupt in the early 1980s and had to be bailed out, with a lot of government money. In other words, we have experienced that disaster before, although most people in the industry now are probably too young to remember it.

We couldn’t make money selling blocks 35 years ago. We would do even worse today.

I recently did an analysis of what the market returns would be from different products made from cod. For blocks, it showed the wholesale market price would translate into approximately $0.77 per pound of raw material in head-on, gutted form — that’s per pound of raw material, not finished product. But that price has to cover the costs of buying, transportation, processing, and distribution, in addition to the price paid to harvesters for the raw material.

Some block production is probably inevitable. But it has to be a very low percentage of the total output. If it is a high percentage, we won’t have a viable industry. Everyone will feel the pain and we may well have another industry-wide bankruptcy like we had in the early 1980s.

Blocks are the only production option when raw material quality is poor. Every other product requires higher quality raw material. Unless we do something to ensure the fish we land are high enough in quality to produce products higher in value than blocks, no one is going to be happy with the outcome — or the income.

I keep dealing with this issue in this column, because I understand its extreme importance for the future of the industry. I was there when we had to deal with this before and I know what a struggle it was. Turning the situation around took a lot of hard work by many people, accompanied by a lot of investment, and the work wasn’t finished when the industry was shut down by the moratorium in the 1990s.

In an ideal world, buyers and processors would have enough discipline not to buy poor quality raw materials. But we don’t live in an ideal world. In our very real world, where normal economic principles do not apply, excess capacity leads to intense competition for raw materials, as was described by Gardner Pinfold. It takes only one desperate buyer willing to tolerate poor quality for everyone to be forced to do the same thing.

For that reason, I am not optimistic processors can solve the problem.

If harvesters were to take responsibility for providing plants with high quality raw materials, I am absolutely certain they will be rewarded with better dock prices than they would have gotten otherwise. They will get more simply because buyers and processors would be able to get more for their products and then use the extra revenue to compete for raw material. If harvesters don’t take the initiative, everyone will suffer. But is that likely to happen?

Former United States President, John F. Kennedy once said, “The problems of the world cannot possibly be solved by skeptics or cynics whose horizons are limited by obvious realities. We need men who can dream of things that never were and ask, ‘why not?’”

In this case, I am asking “why not?” But maybe I am just dreaming.

No Replies to "Quality and Price"