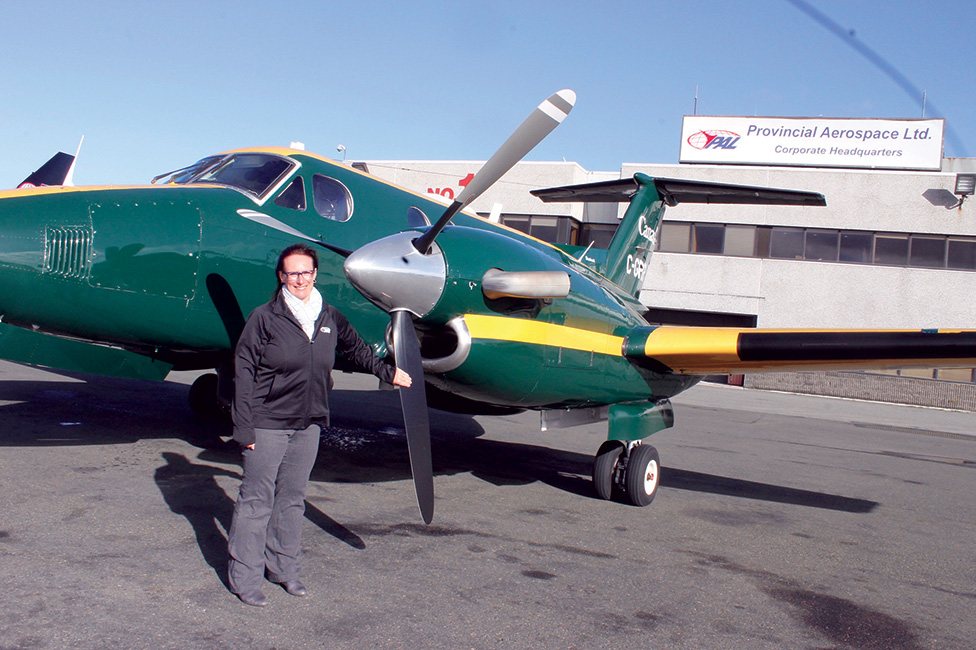 Teri Childs spends a lot of time looking for things on or in the ocean.

No, she is not a mariner — Teri is above that — hundreds and sometimes thousands of feet above that.

Captain Teri Childs is a pilot with PAL Aerospace in St. John’s and her job is to keep an eye on both foreign and Canadian fishing vessels, transatlantic shipping, icebergs and even monitoring whales and other marine species. When she is not flying, she’s teaching pilots in New York, which is also part of her job with PAL Aerospace.

Teri, who turned 46 at the time of this writing, began her aviation career 20 years ago when she enrolled for her first semester of a three-year aviation/pilot program.

At 26, Teri was older than most of her first-year classmates, but she may have been better prepared because she had several years of life experience behind her.

Teri grew up in Fortune on Newfoundland’s Burin Peninsula, just 18 miles from the French islands of St. Pierre et Miquelon. After graduating high school, she spent two years in St. Pierre studying French. Fully bilingual, she easily secured a job working on the Newfoundland/Nova Scotia ferry service. That worked well for Teri because her job was only during peak traffic season in summer, allowing her to take time from fall to spring to consider what she wanted as a long-term career.

She attended school in St. John’s doing a secretarial course, but that didn’t go anywhere.

“That just wasn’t for me — I just couldn’t sit still long enough to do that because I didn’t like it so I put that out the window.”

Teri’s parents operated a car rental agency and a gas station in Fortune, so she worked there while trying to figure out her next move.

“Sometimes, I think dad and mom only got into that business to give me a job,” she laughs, adding they probably thought she’d never make up her mind.

Teri did not grow up with a passion to be an airplane pilot, although it was something that she was casually associated with at a young age. As a child, Teri was accustomed to her dad, Ron Thornhill, going to and from work in a helicopter. Ron was a lighthouse keeper and often worked on islands or remote headlands around the Newfoundland coastline that were only accessible by helicopter or, in some cases, a boat.

Often going with her mom to take/pick up Ron at the helicopter landing sites, Teri was always intrigued as she watched the choppers landing or lifting off. It was that childhood memory that led Teri to inquire about flying as a career.

She first considered becoming a helicopter pilot but after a little research, she felt that fixed-wing aircraft would be more appropriate for her. 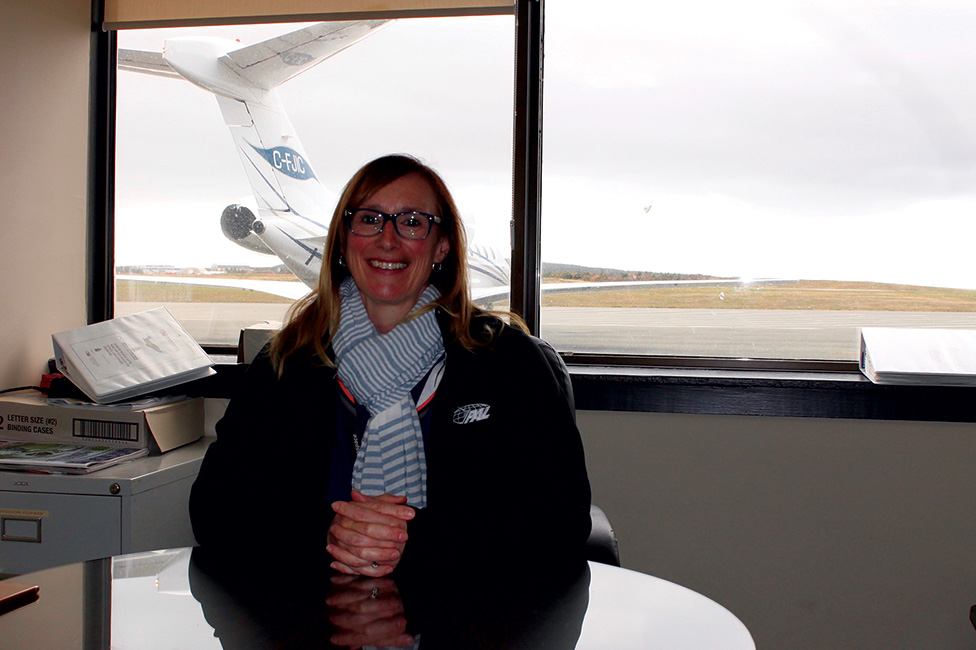 In the fall of 1996, Teri packed her suitcase once again and was off to flight school in St John’s. She finished her training three years later but instead of flying right away, she became a flight instructor in Halifax, a position she held for five years. She also worked part time with Maritime Air Charter in Nova Scotia, piloting a Navajo aircraft.

In 2006, Teri returned to St. John’s to work with Provincial Airlines (PAL). In 2008 she worked as first officer on a Dash-8 and that led to one of the most memorable periods of her career.

In the summer of 2008, she was asked to work out of Curaçao, one of the Dutch Antilles islands in the Caribbean. PAL had a base there and her job was conducting marine surveillance flights in the Caribbean, much the same as what she does these days in Newfoundland.

A typical day for Teri starts with arriving at the airport at 6 a.m., an hour before flight time. Taking off at 7 a.m., her daily surveillance time and geographical area depends on which of the airline’s three clients the flight is for.

If it is for Fisheries and Oceans (DFO), it is monitoring and recording data on activities by domestic and foreign fishing vessels to determine if they are operating in compliance with fisheries regulations. For DND, it monitors transatlantic shipping to see if ships are abiding by the law and for Environment Canada — looking for everything from oil slicks to movements of whales, sea turtles and a wide range of things including floating dead whales that may be a hazard to shipping.

Iceberg tracking is also an important feature of Teri’s job. They record numbers of bergs, location and the berg’s movement/speed and direction. Bergs are not only a hazard to shipping but a large berg can be very worrisome for operators of offshore oil rigs, especially the Hibernia platform which doesn’t have the capability of moving out of the way of bergs like some other oil production facilities can do.

The Beechcraft (200 series) King Air plane that Teri commands has a five-hour fuel capacity, so total flying time over the ocean depends on weather conditions at home base in St. John’s and of course offshore as well. If it becomes foggy and she doesn’t have appropriate visual reference for landing, Teri has to calculate fuel to flight time ratios for alternate airports.

Besides a co-pilot, there are at least two other people onboard the King Air working from the back of the aircraft. One person is a radar operator and the other a data management systems person. Both are monitoring information coming from technical equipment located under the belly of the aircraft, including infrared cameras. On some occasions, a fisheries officer from DFO will accompany the team as well.

Teri is both a flight captain and a training captain. She spends four or five days nearly every month in New York teaching and/or upgrading pilots who, in some cases, have been flying with her own company for several years. That training is carried out at LaGuardia airport with the use of flight simulators.

Between her flying schedules and her instructing requirements out of the country, Teri doesn’t have a lot of leisure time at home. What spare time she does have is largely taken by her children and/or by her husband’s two children from a previous marriage.

It is helpful that her husband, Ian Childs, is also a pilot with PAL Aerospace and, like Teri, he also is an instructor. Unlike his wife however, Ian is also a ground school instructor, which is carried out at the company’s site in St. John’s. Also, on the upside, both Teri and Ian have the same boss who understands the family-time needs of the husband/wife team.

Teri says their manager, Barry Jones, is very helpful and does everything he can to schedule both as efficiently as possible to accommodate their family time.

Teri also has accolades for her parents, especially her mom, who travels from Fortune any time she’s needed.

“I could never have managed without my parents help — my mom has been my backbone and dad has also been back and forth all the time doing whatever was needed,” Teri smiles, adding that her oldest daughter is now an adult and recently left the nest.

Nationally, only 10 per cent of pilots are female. Teri says her company has a slightly higher percentage than that these days, but she was the first and for a while, the only female on the Newfoundland pilot staff.

Recalling when she first started with PAL in St. John’s, Teri says she was quiet and reserved, all the time listening and observing. A woman in the office later confided to Teri that she thought it was a waste of time hiring a female pilot because she wouldn’t last working with an all-male work force.

Teri proved her wrong.  In fact, working with a bunch of macho guys hasn’t been a big issue for Teri.

“You learn, you adapt and you roll with it,” she says with a matter-of-fact shrug.

Teri says she would recommend her job to young women but she says they should be fully briefed on how tough it can be in order to avoid disappointment later.

“It’s not for all women but it is interesting for sure,” she says.

Unlike pilots with commercial airlines, Teri spends almost all her flying time over water. She enjoys her job although sometimes, as is often the case off Newfoundland’s coastlines, when the weather is foul, winds are high and fog and/or snow is thick, she says the stress level can run a little high, but then, the next day it’s fine and for Captain Teri Childs, there is no better place on earth than to be in the cockpit of a King Air above the Atlantic Ocean.

No Replies to "Queen of the King Air"