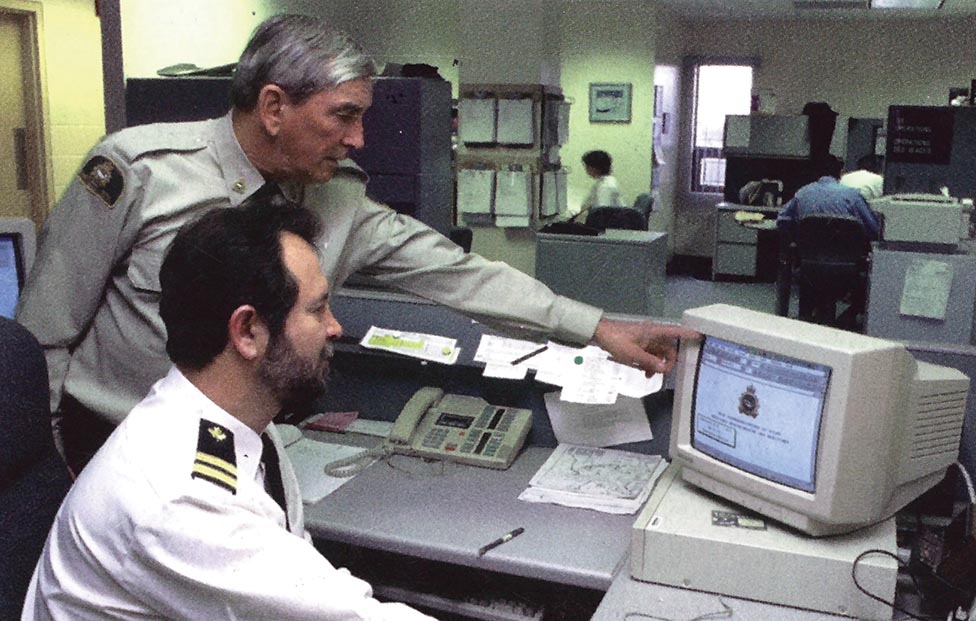 When an obituary describes the deceased as “our professional blueberry picker, baker of pies, weapon on the dance floor and ruthless card player,” you know this was an interesting person.

When friends describe that person with words like integrity, kindness, honesty, humour, respect, caring and trust, you know this was an awesome person.

Those are words we heard over and over again when we asked Gordie Gore’s friends and former colleagues what word comes to mind when they think about him. We at The Navigator Magazine knew Gordie and we concur. Gordie was one of a kind.

Gordie had several careers, starting with the military and ending in marine vessel brokerage. Gordie passed away in Yarmouth, Nova Scotia on February 16, 2021. He was 80.

Gordie grew up in Montreal.  He joined the Royal Canadian Artillery in his late teens. He served a couple of tours in Europe, one in Germany and another in Cypress.

He steadily rose through the ranks and after 27 years of service, he retired from the artillery as a Chief Warrant Officer. His family says Gordie’s crowning achievement was his induction into the Order of Military Merit by (then) Canada’s Governor-General, Jeanne Sauvé in 1985.

Still young and in excellent condition in his mid-40s, Gordie, known for his boundless energy, was not ready for the rocking chair and it wasn’t long before he embarked on his second major career.

His 27 years of military experience placed him as a top contender when he applied for a job with the Department of Fisheries and Oceans in Yarmouth, Nova Scotia in 1986. Gordie got the job and donned another uniform — this time as a fisheries officer. 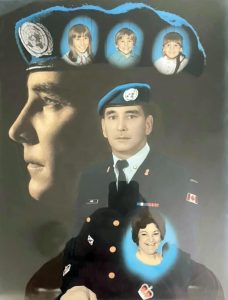 Photo of Gordie taken in 1978 during his Canadian Artillery tour in Cypress. Embedded into the photo are his daughter Helen, his son Gordon and youngest daughter Kim on his beret along with his wife Scottie on his heart.

About 14 years later, Gordie was ready for a new challenge, but this time he wanted something different, so he stayed away from the regimen that is usually associated with holding a uniformed position. In 2001, he took a job as a boat broker with TriNav Marine Brokerage’s Yarmouth office.

Trevor Decker, a director with TriNav, was Gordie’s boss.

Trevor held Gordie in very high esteem from the beginning of their working relationship. Trevor says that selecting Gordie for the brokerage position when TriNav was just getting a foothold in the brokerage business in Southwest Nova was a good decision.

Although marine brokerage is largely about salesmanship, Trevor says Gordie was not a great salesman, but he had other qualities that were valuable to the company. Gordie conveyed sincerity and honesty that in many ways was better than all the sales slickness on Bay Street. People felt they could trust Gordie — they sensed he wasn’t going to try to pull a fast one on anyone or sell them a bill of goods.

“Gordie was good for the company — he did a good job. He was not the top in sales although he brokered one deal that was in the millions,” Trevor says, adding that Gordie played a different role than selling vessels and/or fishing enterprises.

Gordie was bilingual and knew a lot of French-speaking people and Trevor says that was an asset to TriNav in a sort of ambassadorial way.

“We wanted to spread our wings as far as we could in eastern Canada and Gordie was a big help in that regard. He travelled around the Maritimes and Quebec and introduced our company to people in both languages and established a large number of contacts. That opened potential business doors for us, many of which are still valuable contacts for us today.”

Paul Pinhorn, also one of TriNav’s directors, remembers when it became evident to him that Gordie was an employee that could be trusted.

He says there was an internal corporate issue that would have created problems for the company if Gordie hadn’t figured out what was going on and told the company’s owners about it.

“That’s when I knew that Gordie had the company’s best interests at heart and we could depend on him,” Paul recalls, adding that Gordie often said, “you got to take care of your business, guys.”

Dave Bishara was one of Gordie’s best friends. They worked together at DFO as fisheries officers and then later as TriNav Marine brokers.

Not usually at a loss for words, Dave struggled to find the proper adjectives to fully express his huge admiration for his former colleague.

“Gordie’s generosity was unmatched. He was the most giving and kind person on the planet,” Dave says, his voice sometimes faltering with emotion.

“Gordie and his wife Scottie even knew when our kid’s birthdays were and would always drop by with a gift of for them — same thing in Christmas, Valentine’s Day, Easter and so on — and not just ours but for many others. They were amazing,” Dave smiles.

There was an unwritten rule that nobody left the Gore household without a gift in hand. It could be anything from a candy to a magnum of wine.

Gordie was also known as a no-nonsense kind of guy and as caring as he was, he didn’t hesitate to tell his friends and co-workers when he thought they were on the wrong track. Not everyone would react positively to that behaviour, even from a friend, but Gordie’s friends grew to expect and respect his advice.

Dave Bishara didn’t mind Gordie’s forthrightness. He says it was just another one of Gordie’s wonderful characteristics.

“He was like that because he cared about you and wanted to help. He was driven to do the right thing all the time and that meant trying to keep his friends on the right track,” Dave says, adding that Gordie was usually right even in times when you couldn’t see the merits of his wisdom at first.

Dave’s description of Gordie was echoed by others we talked with. 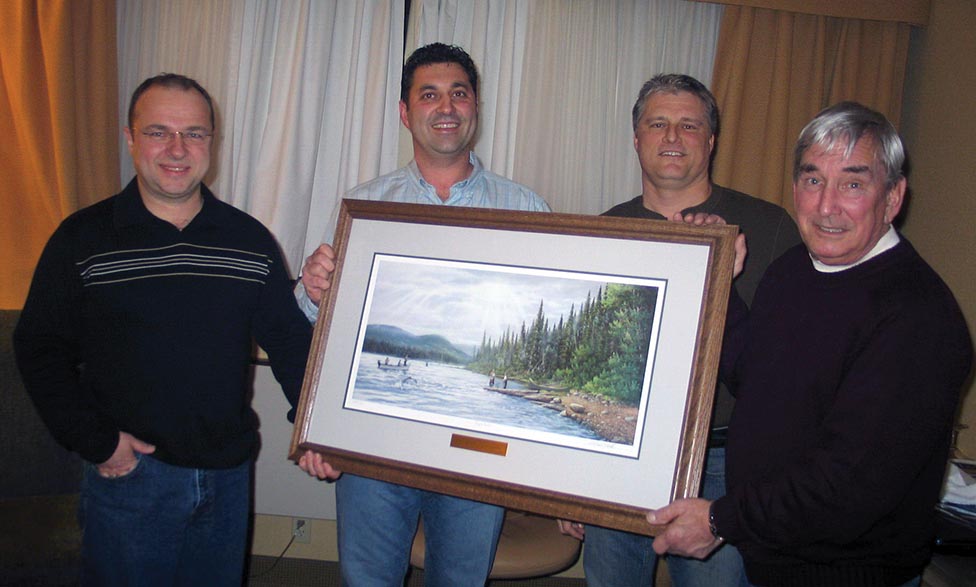 Bob Gavel, a colleague of both Dave and Gordie at TriNav in Yarmouth said “Gordie was a hardworking and honest broker and he would do anything for his clients. He always had a joke to tell and enjoyed having people over to their house. You always knew where you stood with Gordie as he always spoke his mind.”

Rick Young, a director at the TriNav Group of Companies, says he was very fond of Gordie and his no-nonsense and direct manner of communicating.

“I liked his no-bones way of doing things — he didn’t beat around the bush as they say. You could tell immediately when meeting him that he was honest and trustworthy. Always full of energy, hard worker, could take a joke and never demonstrated a fake persona. He also had good advice and provided it to you in a non-lecturing way. One of his best pieces of advice, which I tell myself and others is, ‘you is what you is.’ I love that; it is simple and keeps one grounded.” 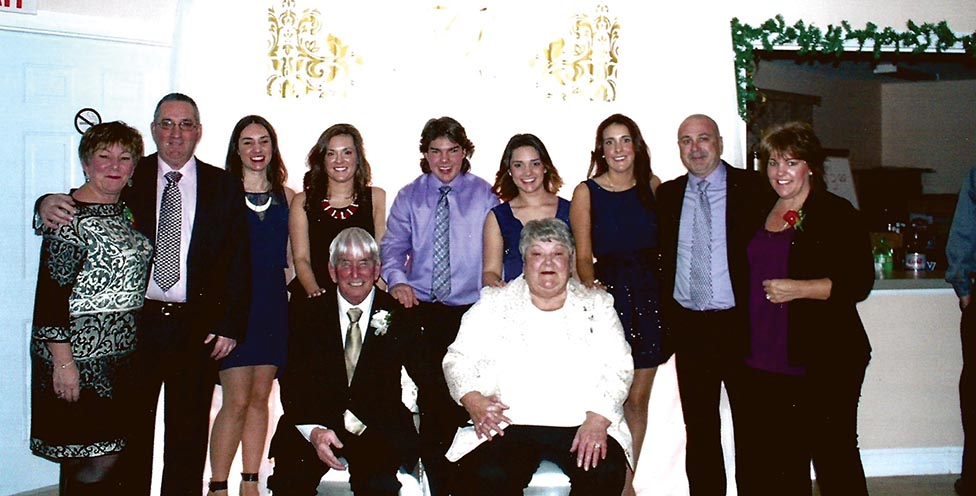 The whole family were in attendance at Gordie and Scottie’s 50th wedding anniversary in 2015. Daughter Helen, far left and daughter Kim on the far right.

All the people we interviewed found it impossible to talk about Gordie Gore without talking about the love of his life, his soulmate, his best friend who also happened to be his wife, Margaret (Scottie) Surette from Yarmouth.

Gordie and Scottie knew each other before they met.

In the 1960s, it was common for military personnel stationed overseas to have pen pals. There was no Internet in those days and international phone calls were only used in emergencies so a letter from “home” was always a high point for soldiers.

Through a web of family contacts, someone asked the effervescent Scottie if she would begin an overseas correspondence with Gordie because her upbeat and bubbly disposition would brighten anyone’s day. She agreed and a couple of years and many letters later, they met and were married in 1964.

Gordie and Scottie had three children, two daughters, Helen and Kim, along with a son, Gordon Jr.  Sadly, Gordon Jr. died after being struck by a vehicle in April 1983. Gordon and five friends were walking on the side of a road when a vehicle came speeding by. Apparently, Gordon and one of his friends pushed the others into a ditch out of harm’s way, but Gordon and his friend were struck and killed. The other four survived. It’s believed the driver was drunk. Gordon was just 13.

The accident happened on Helen’s 18th birthday. Helen says her mom never got over the tragic loss of her only son.

“She couldn’t go to the cemetery and could never talk about it — it was just too painful. But she and dad leaned on each other and together, they made it through,” Helen says.

During Gordie’s 10 years with TriNav, Scottie travelled with him as much as she could. Life was better that way.

Scottie passed away in 2017 and when Gordie died nearly four years later, this past February, their daughters Helen and Kim agreed that the two lovebirds are up above now, enjoying a lovely dance.

No Replies to "Remembering Gordie Gore"