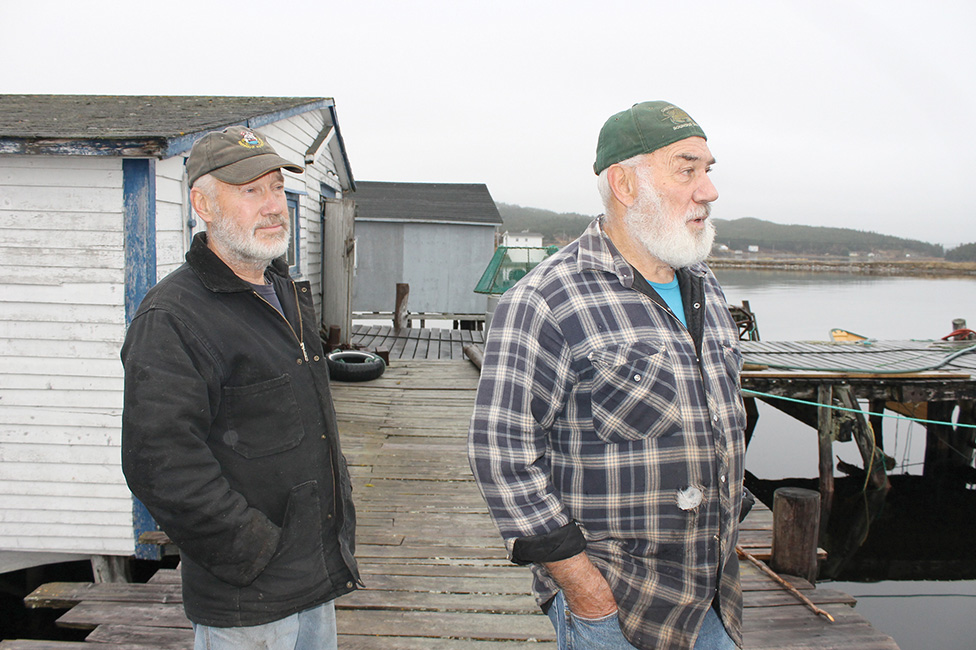 Earl Johnson has taken a vacation every year since he turned 40.

But unlike many people, Earl doesn’t always go to Florida — he likes to take the path less travelled. For example, a few months ago, he spent a couple of weeks in Mongolia with stops in a few other countries along the way.

So why does a 64-year old fisherman from North Harbour, Placentia Bay Newfoundland go to Mongolia, a landlocked country between China to the south and Eastern Russia to the north?

“Because I thought it might be different,” Earl says with a wry smile.

“Not really,” he replied.

Well, that response begs a follow-up question or two and, when you listen to Earl’s answers, you realize that ‘different’ is indeed a relative term.

Listening to him describe rural Mongolia gives you a glimpse into Earl’s early life. You learn that as a young boy growing up in Haystack, a picturesque and now resettled community on an island in Placentia Bay, life was very basic.

There was no central heating, no electricity, no indoor plumbing — pretty much the same way it still is in much of Mongolia. So, for people like Earl Johnson and thousands of other outport Newfoundlanders, especially those who lived on islands that dot the province’s coastline, it is not far-fetched to think people live in those same conditions in Mongolia.

Earl started vacationing outside Canada when he was about 40. A couple of friends his age died, giving Earl pause to think about his own lifestyle. He always wanted to travel but thought he would do that in retirement, but with the passing of his friends 25 years before standard retirement age, he wondered if he would make it to 65 so he pledged to take a trip a year beginning right away. 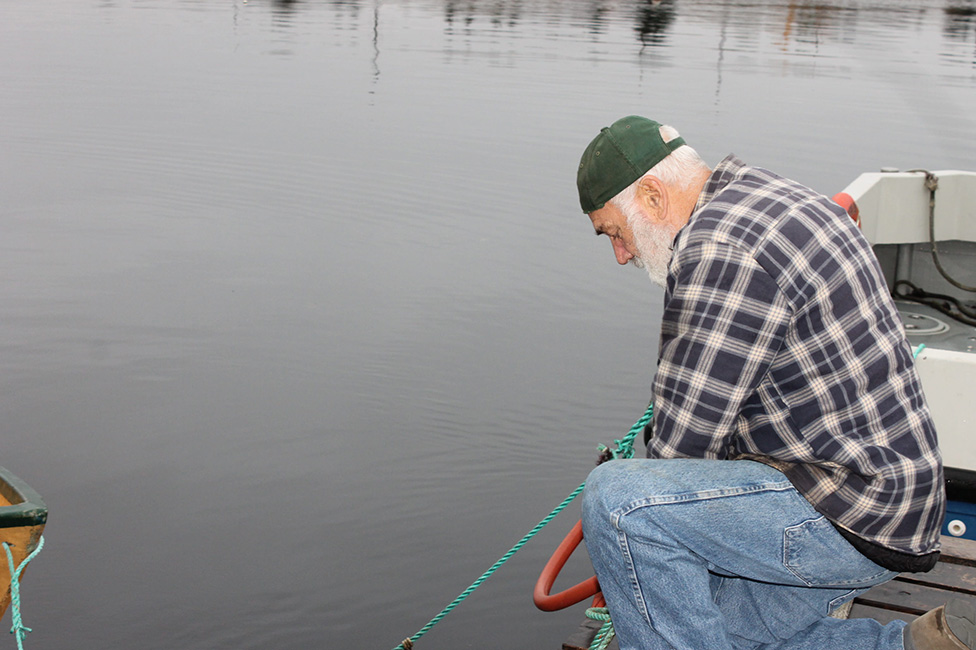 There are some great stories about Earl’s travels, like the time he was walking the beach in Tunisia, Africa and saw an inshore fisherman repairing his boat. Earl noticed the man was trying to do a job that needed at least two people so he decided to pitch in and give the fisherman a hand. He did that for several days until the repair job was completed.

But there is much more to the soft-spoken inshore fisherman than his road stories.

Back in the days of declining cod stocks and before the eventual ban on cod fishing in 1992, Earl was a board member with a group of small-boat fishermen called the Inshore Fishermen’s Improvement Committee. He became president of that organization in the late 1980s and was one of the thousands of inshore men who understood that something was going very wrong in the Northwest Atlantic Ocean.

Inshore men using fixed gear saw the impending collapse of cod stocks before the larger, offshore vessels noticed anything wrong because the offshore was mobile and could chase, find and catch fish all the way down to the last few aggregations.

Earl Johnson intuitively knew that his small group had to do something to try and prevent a calamity. But the only thing they could do was to raise their voices and hope someone listened. 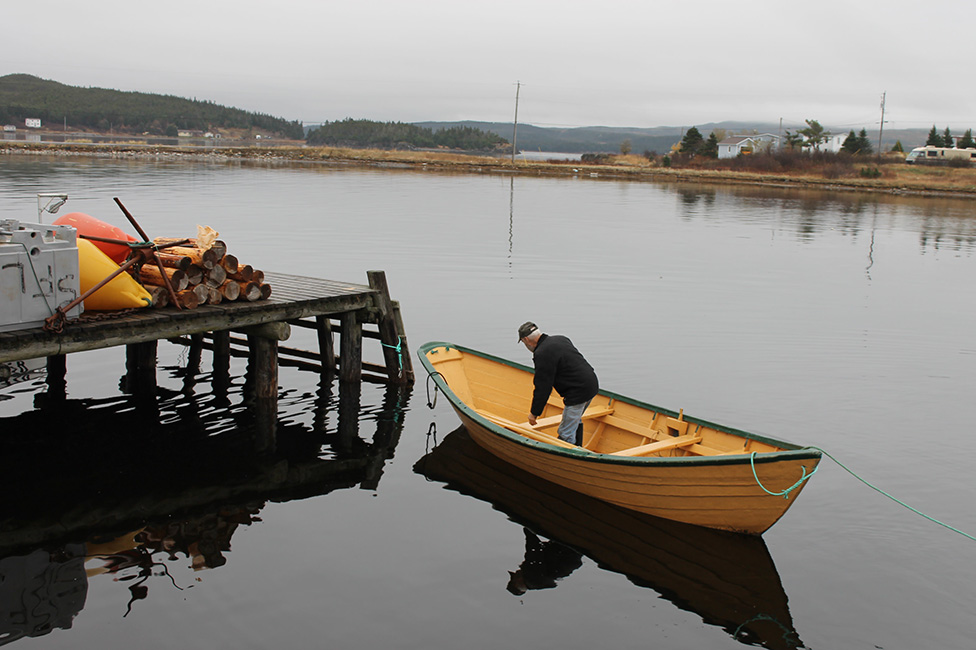 Earl in his dory.

Encouraged by his older brother and best friend Oakley Johnson, Earl knew there was no point in fishermen talking among themselves — they needed to attract attention from the decision makers all the way up the top levels of government in St. John’s and Ottawa.

Earl and the entire committee worked their hearts out and organized a series of conferences and did they ever attract attention. Federal and provincial politicians, top-level bureaucrats, scientists, fisheries managers and processors gathered several times at the Holiday Inn in Clarenville and participated in some of the best fisheries debate conducted anywhere pre-moratorium.

All major local media outlets and some national journalists recognized the high calibre of those events and gave it good coverage.

Asked why he thought the organization, made up entirely of small-boat fishermen was so successful, Earl replied it might have been because they weren’t “townies or lawyers — just a grassroots organization of inshore fishermen dealing with fishermen’s’ concerns.” 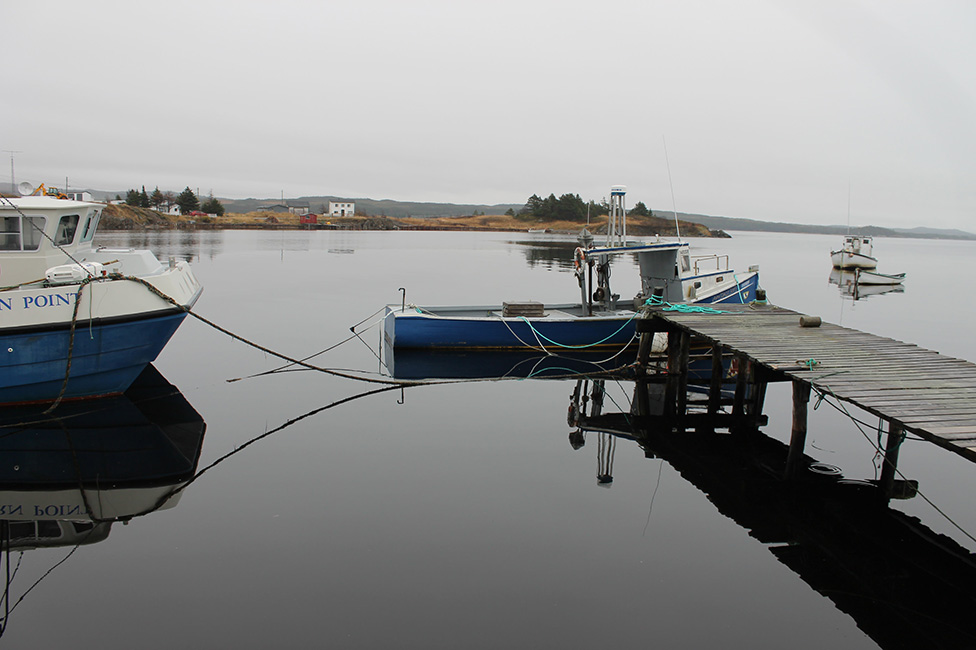 Four of the Johnson’s boats including their little 100-year old make-and-break knockabout (at mooring).

He admits the Improvement Committee got a few dirty looks from the Fishermen’s Union, but he says the FFAW was not taking the lead that he and the committee executive considered necessary and they were determined to forge ahead despite the fact that many of them were also active within the union.

But, all the impassioned speeches and warnings of an impending demise of Northern Cod by the likes of Dr. Les Harris, then President of Memorial University, scientist Dr. George Rose and others at those conferences, was not enough to save the largest cod stock on the planet.

The wheels of government move slowly and finally, on July 2, 1992, it placed a ban on fishing Northern Cod but Earl Johnson and his colleagues could hold their heads high — they tried their best and sounded the alarms that, if heeded, might have made a significant difference.

The Johnsons resettled from Haystack when Earl and Oakley were just boys. When Earl was old enough to carry his weight in a fishing boat, he and Oakley became business partners and fished inshore. They worked hard and they worked year-round.

At certain times of the year, cod would be much scarcer than in peak season and most fishing crews would haul up their boats for a few months.

But not the Johnson brothers.

“We knew that catch rates would be low at that time of year, but we’d keep hauling gear every day till supper time and by the end of the week we’d have a few dollars made — a few dollars we wouldn’t have had if we were sittin’ home all week — that’s the way we always looked at it,” Oakley says.

The Johnson brothers were always able to see things a little differently. 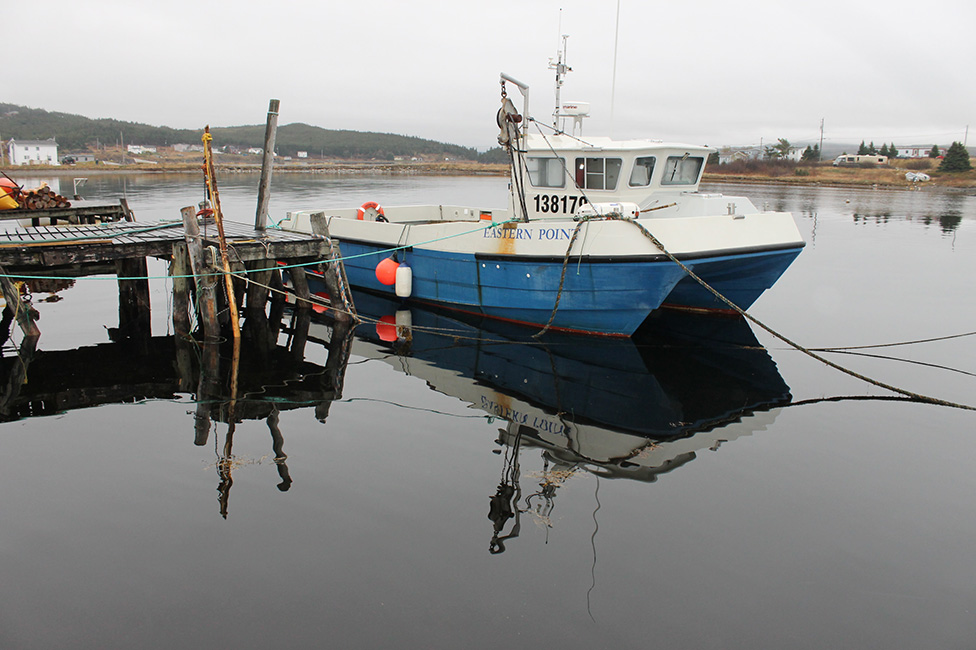 In 2003 they needed a new boat because they had added snow crab to their list of species and were fishing further from home than usual. They needed a sturdy boat with ample deck space.

While searching for ideas, Earl was attracted to a design that hardly any other Atlantic Canadian fisherman would have given a second look. Even the fact the design company and builders were located in England didn’t deter him from checking it out.

After engaging the provincial fisheries people to look at the catamaran as a possible innovative vessel that may be suitable for a diversifying Newfoundland fishery, Earl was off to England and with a little help from the government, a deal was made.

The Eastern Point, named for the headland at the entrance to Haystack, was built in the south of England and shipped across the Atlantic, the following year. With twin hulls, the 34’11” catamaran doesn’t need stabilizers. It’s an extremely strong boat that hardly notices 40-knot winds. And, it also boasts an extra large work platform because of its 16-foot width.

So with, stability, comfort and speed, Earl and Oakley worked the Eastern Point in the best of conditions.

That Johnson brother’s fishing partnership lasted all the way to retirement. When Oakley reached his late 60s, he was plagued by arthritic-type pain in his legs that is common with fishermen after a lifetime on the water and he decided to retire.

Earl weighed his options and figured it would be impossible to replace his big brother because after 45 years working side by side, the two were like hand in glove and could literally read each other’s minds on the water. He figured by the time he trained someone else he would also be ready to retire, so he decided to take a job working at a nearby silver fox farm.

But the Johnsons have not given it all up. Their five boats are still at their wharf or on moorings in the harbour and they have no intentions of selling any of them.

A quick look at their boats says a lot about Earl and Oakley. While they were not afraid to embrace new technology as evidenced with the catamaran, they also have a wonderful respect for tradition. They have a 100-year old boat equipped with an old make-and-break engine. In between the very old and the new are a 65-year old vessel, a 33-year old trap skiff and a dory built 35 years ago. The Johnsons have a good head start on owning their own fishing vessel museum.

No Replies to "Respecting Tradition but Embracing New Technology"