This fall, the Marine Institute’s Centre for Fisheries Ecosystem Research (CFER) will lead a team to rehabilitate eelgrass habitats and associated fish and shellfish resources in the coastal waters of Placentia Bay.

The $4.7-million, five-year project was announced in September by Dominic LeBlanc, Minister of Fisheries, Oceans and the Canadian Coast Guard, under Government of Canada’s $75 million Coastal Restoration Fund to help to rehabilitate marine ecosystems and address threats to marine species.

The Marine Institute is the first group in Newfoundland and Labrador to receive project funding through the fund.

The project will improve the productivity the Placentia Bay ecosystem, benefitting fish and shellfish resources in coastal waters by restoring eelgrass beds, and enhancing habitat through deployment of artificial reefs. The team is also hoping to restore migratory corridors for Atlantic salmon in river flowing into Placentia Bay. 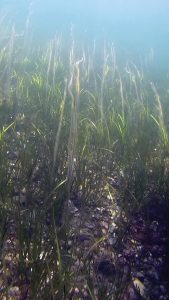 CFER will partner with the Miawpukek First Nation, ACAP Humber Arm, Salmonid Council of Newfoundland and Labrador, Salmon Association of Eastern Newfoundland, Fish, Food and Allied Workers Union, MUN Ocean Science Department as well as communities in the region on the project. The work kicked off in late September with a workshop with collaborators.

“Projects of this magnitude and importance are the reason why the Marine Institute’s Centre for Fisheries Ecosystems Research was created,” said Glenn Blackwood, Vice-President, Memorial University (Marine Institute). “It’s vital that we all work together with one common goal of ensuring sustainable fisheries and healthy ecosystems for years to come.”

Eelgrass is an ecologically significant species, providing nursery habitat for many commercial fish species, supporting high biodiversity and reducing the impacts of pollution and climate change. However, eelgrass beds are particularly vulnerable to coastal development, marine pollution and invasive species.

Over the last decade, eelgrass coverage in Placentia Bay has severely declined.

Over the next five years, CFER will focus the team’s work in three areas. First, they’ll work on restoring the eelgrass beds at five different sites in Placentia Bay. Second, they’ll determine ways to mitigate barriers to fish migration in the local watershed and third, the team will enhance fish and shellfish habitats through the deployment of artificial reefs.

Working with CFER will be a Placentia Bay citizen science network where people will be encouraged to upload pictures of species they observe, contributing to the monitoring of species composition, distribution and abundance in the area.

CFER will also hire a number of intern and graduate students as well as those involved in the Women in Science and Engineering program to work on the project.

The Marine Institute will fund other activities such as new research programs to monitor eelgrass bed cover and abundance of key commercial species, such as lobster and cod in Placentia Bay.

Over time, CFER hopes one of the outcomes of the project will be the transfer of the techniques used in this project to improve eelgrass and fish habitats to other regions in the province.

The Navigator: Charting A Course for the Future

No Replies to "Restoring a Healthy Ecosystem in Placentia Bay"