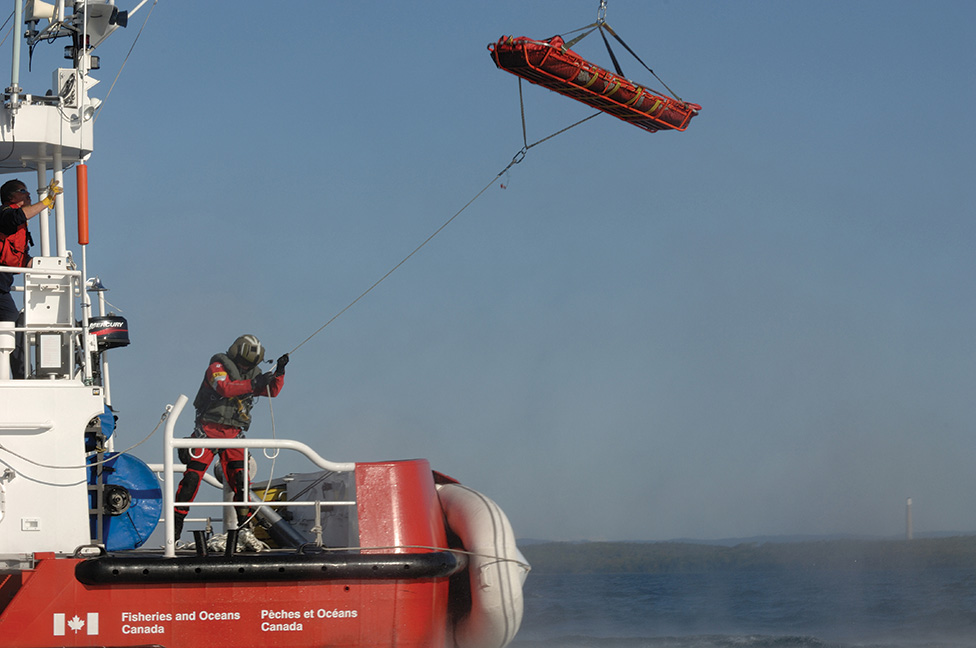 The Search and Rescue Region (SRR) Halifax covers 4.7-million square kilometres and over 29,000 kilometres of coastline. The region encompasses all of the Atlantic provinces, the eastern half of Quebec, the southern half of Baffin Island and a large area of the western North Atlantic ocean.

“The distances are typically long, the weather frequently challenging and the emergency circumstances dire. Fortunately, we have a whole government approach to SAR, collaborating with our frontline partners to ensure timely responses and positive outcomes under the most demanding circumstances.”

He continues, “the exceptional teamwork displayed by the Canadian Coast Guard (CCG), HMCS Charlottetown and Royal Canadian Navy divers in assisting the CCG Ship Ann Harvey when she ran aground near Burgeo, Newfoundland and Labrador stands as a testament to this collaboration.”

The men and women who form the backbone of the SAR system are upholding Canada’s obligations to its people to keep them safe, and to voyagers of all nationalities who enter our territories and internationally agreed SAR zones.

“Safety is always a top priority, from the time the distress call is received until the SAR crews have completed the mission,” says Major Rhonda Stevens, Officer in Charge of the Joint Rescue Coordination Centre (JRCC) Halifax.

“Environmental factors definitely create challenges for our SAR responders. Whether it be high sea states and gale force winds for our Coast Guard SAR vessels or mountains and densely wooded terrain for our aircrews, safety is key to mission success.”

The JRCC Halifax is responsible for coordinating, controlling and conducting all aeronautical and maritime SAR activity within the SRR Halifax region. It is manned 24 hours a day, seven days a week.

After receiving a distress call the JRCC staff assesses the degree of emergency, creates a search plan, tasks resources, executes the rescue plan and then transitions to recovery or transfers the case.

“There’s a limited amount of resources to go after people in distress and when an incident happens it happens very suddenly,” says Master Warrant Officer (MWO) Tim Eagle, Search and Rescue Technician.

“Every single day there are cases going on and when you don’t hear about us, it means that things are going well. The Search and Rescue team go day and night, handling multiple incidents.”

MWO Eagle says the focus for SAR teams is always on working to the best of their ability each day to ensure the safety of the people in this region.

To determine which SAR assets are best suited to deploy for a given distress situation, the JRCC examines many parameters, including current weather, wind and water currents; terrain and distance from the nearest available SAR assets; case severity (risk to life and survivability); as well as the number of other ongoing cases and coverage needed for potential cases.

The highest volume of SAR incidents in the SRR Halifax occurs between May and September each year.

In 2014, the JRCC Halifax had 2,538 SAR cases. Of these, 1,568 were marine, 197 were aeronautical and 127 were humanitarian. Marine SAR operations make up the large majority and the most frequent type of these is the medical evacuation mission, where a sailor needs to be transported to hospital for medical attention.

The Canadian SAR system is one of the best in the world because of the cooperation and teamwork demonstrated by the Canadian Armed Forces (CAF), the CCG and the network of government and civilian organizations and volunteers that make up the SAR system.

Marine SAR assets in the region come primarily from the Canadian Coast Guard, both in-shore vessels at various bases and offshore vessels in the area.

Volunteers Helping to Save Lives