In the fishery in Atlantic Canada, there is a widespread belief among harvesters that they are the most important people in the seafood value chain, because they catch fish for others to process and eat.

Without them, there would be no fish.

Although there is a certain logic to it, that view of the world is completely upside down. In any value chain — seafood or other — the most important person is the one at the end of the chain — the consumer — who buys the product, pays for it, and uses it. Without that customer, we would not catch any fish, so we would have to find other ways to earn a living.

Furthermore, the customer has lots of options to buy products other than the ones we sell — either fish or other protein foods, such as beef, pork or poultry. 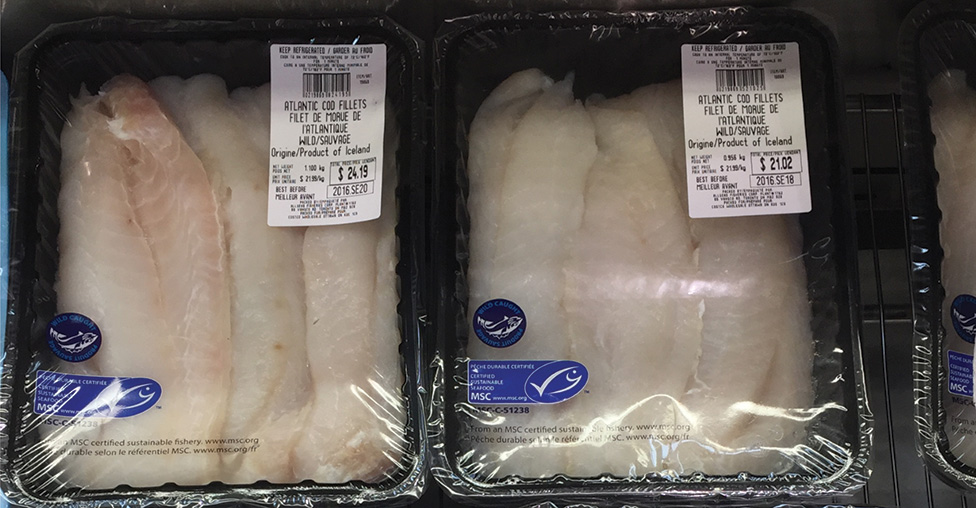 We all like to think we are important. But the truth is we are not.

To be successful in business, it pays to be humble, because our role is to serve someone else — the customer. If we do that well, customers will want to do business with us and will likely even pay us more for what we sell.

Part of our upside-down attitude comes from the fact that very few people in the fishery ever come in contact with the customers who buy and eat their products. Most of us think the job is done when the fish are landed at the dock or loaded into a truck for shipment to market, usually thousands of miles away. Because we don’t actually meet or even see customers, we don’t understand what they expect or want or what motivates them to buy products from us or someone else.

Not only do we not meet the consumers of our products, most people in our industry don’t even know the people who buy products from us and re-sell them to others.

I often ask people in the industry if they buy fish products in grocery stores or visit the fish counters in those stores. Almost no one does. Maybe their spouses do the grocery shopping or maybe they just bring home the fish they want to eat, because they caught it themselves or bought it from a friend or even the local plant.

I have been involved in the food business, one way or another, most of my working life. I like to eat, I like to cook, and I especially like to cook and eat seafood.

Maybe for these reasons, I also like going to grocery stores, not just to buy the staples, but to look at what is available and what may be new and different.

I look at the quality, where the food comes from, how it is packaged and displayed and how it is priced, comparing the value-for-money of one to that of another. I have literally traveled around the world and wherever I go, I visit food stores to see what is available and what is different from what I am offered back home.

It is always interesting and often very educational. In my opinion, everyone in the industry should be doing the same thing. If they did, I expect some things would change.

In Newfoundland and Labrador, we are contemplating a return to fishing cod on a larger-scale sometime over the next few years. But we will have a lot of work to do if we want to make a decent living at it.

For months now, on any given day, I have been able to go to Costco in St. John’s and buy high-quality fresh wild Atlantic cod fillets from Iceland, MSC-certified, priced at $9.97 per pound. More recently, they have added fresh Icelandic dover sole at $10.43 per pound — a species we don’t have on this side of the Atlantic.

These products are flown from Iceland to Toronto and delivered to a Costco distribution centre, from where they are distributed to Costco stores in eastern Canada. On an ongoing basis, Costco also sells fresh farmed tilapia — a mild-tasting white-fleshed fish often used as a substitute for cod — at $6.80 per pound but where they come from, I don’t know.

If Newfoundlanders — and others — were not eating these products, they would have disappeared from Costco’s display cases long ago.

Over the Christmas break, I spent three days in Toronto, where I visited the St. Lawrence Market downtown, considered to be “one of the world’s great markets.”

Among the food and other products on display were beautiful-looking fresh cod and haddock at $16.99 per pound and fresh plaice at $17.99 per pound, all from Iceland. Iceland also flies fresh products into Edmonton, Boston, New York and a number of other North American cities. Norway is increasingly doing so as well.

The freezer cases tell another story. At our local Costco, we are offered good quality Canadian frozen wild-caught haddock loins — the very best cut from the fillet — for $6.80 per pound, but farmed tilapia loins from Indonesia are also available for $7.42 per pound. That is somewhat surprising, given that tilapia is usually priced lower than cod.

Sobeys and Loblaws/Dominion/SuperStore carry an abundance of frozen fish products made from cod, haddock or Alaskan Pollock harvested either in the north Pacific (Alaska or Russia) or the Barents Sea (Norway or Russia) and frozen at sea, then sent to China for processing and imported for sale in grocery stores across Canada. Although the fish are frozen after harvest, thawed in China before processing and frozen again afterward, the products are good quality and sold at very attractive prices. 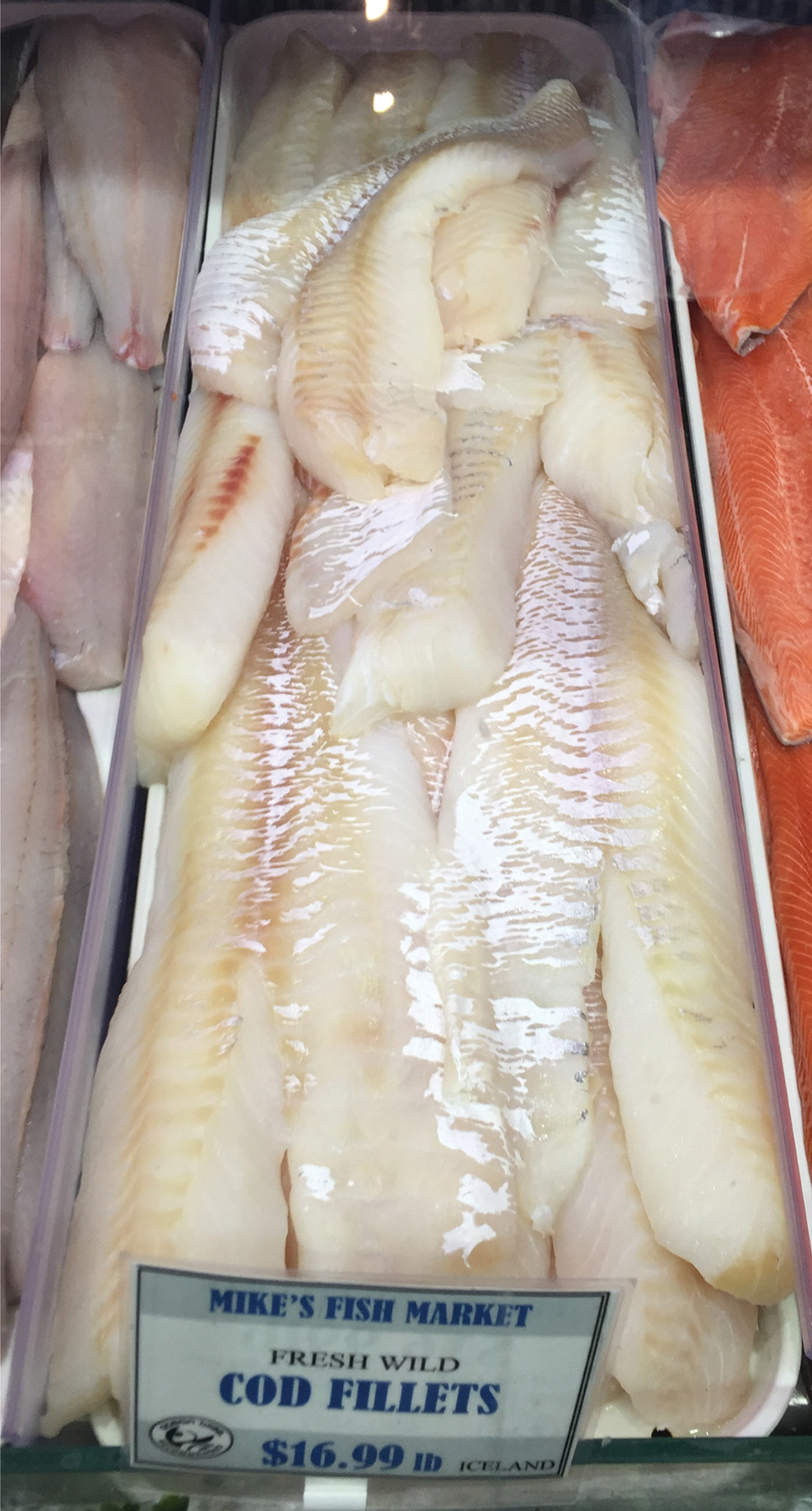 When I visited in January, the local Dominion store (Loblaws or SuperStore in other provinces) was selling fresh Canadian wild cod fillets caught in NAFO zone 3Ps for $9.49 per pound, re-packaged bulk-packed individually-quick-frozen (IQF) cod fillets of unspecified origin for $7.99 per pound and wild Pacific cod fillets processed in China for $5.67 per pound. It was also selling frozen, skinless, boneless wild haddock and farmed tilapia fillets for $5.67 per pound and frozen skinless, boneless basa fillets for $4.80 per pound.

Basa, otherwise known as pangasius, is an intensively-farmed, mild-tasting, white-fleshed catfish native to Vietnam that is often sold as a low-priced substitute for cod. But that fish has a poor reputation in many markets, because of the farming practices used.

Sobeys offered fresh cello-wrapped cod, seemingly caught locally in gillnets, because of the blood spots and flesh colour, for $7.99 per pound. It also offered Highliner IQF cod fillets — likely the same as those offered by Dominion and sourced internationally — for $5.99 per pound and Aquastar frozen haddock loins for the same price.

All told, this is quite a range of products and prices for what ends up being essentially the same thing — a seafood meal.

However, it is clear that fresh products sell for considerably higher prices than frozen and that different species sell at different price points. But there is even a considerable range of prices within the fresh and frozen categories for products of the same species. Furthermore, all these products are available continuously, so people must be eating them. And that is right here in Newfoundland, where practically our entire history revolved around fishing cod.

If we are going to have a future in cod, we have to realize that we have some serious competition and we need to figure out how to position our products in the market.

Given the array of choices, how do consumers decide which products to buy? And why would they be willing to pay the much higher prices for fresh products than for comparable frozen products?

As the foregoing illustrates, the Icelanders have figured it out. They have listened to their customers and worked hard to provide what those customers want. They focus on sale of fresh products — even right here in our own backyard — to get higher prices. And they have worked out the logistics to get fresh products to market reliably year-round.

In the United States, fresh fish products have sold for higher prices than frozen products for decades —as they do in other parts of the world, as well — but the gap between them started to widen in the late 1950s and opened up even more around 1980.

In contrast, after adjusting for inflation, prices for canned and cured products have not increased since the late 1940s.

The message is pretty clear — people have a strong preference for fresh products, because they believe those products are the best quality and they are willing to pay more for them. If they can’t get fresh, they will go to frozen, because those products are more “fresh-like” but they are not willing to pay extra. Products that are not “fresh-like” have to be sold at low prices to attract buyers.

As the aquaculture industry developed, it sold practically all of its output fresh. The industry needed to do that, because it needed the higher prices to cover high farming costs. But, now that aquaculture supplies half the fish for human consumption, it has improved efficiency and sells some products frozen, for lower prices. Nevertheless, because it still supplies fresh fish year-round, customers have come to expect that and assess their food choices accordingly.

Sometimes we have to freeze fish to sell the products in distant markets or to address an excess of supply over market demand. But we do that for our own convenience and take a lower price because of it. We would be much better off if we listened to customers and provided what they want, rather than doing what is convenient for us.

Instead of thinking we are the most important people in the seafood value chain, we would be better off if we deferred to our customers.

During the 1940s, Kenneth Elliott was Vice President of Sales for the Studebaker automobile company. In an interview for a magazine article, he stated the following five principles:

These principles were subsequently embraced by many other companies and have become widely quoted. We can all learn from them. And we would all be better off, if we lived by them.

Celebrating the Past... Focused on the future

No Replies to "Serving Customers"