Sharks are Making Waves – Part I

To say that sharks go a long way back in history is a colossal understatement.

Sharks have lived on this planet 200 million years before dinosaurs. For the last 450 million years, the shark has been making waves.

“They are among the most ancient branch of fish. They survived most of the mass extinctions in the past. They’re very plastic in the sense they can occupy many different habitats,” says Fisheries and Oceans Canada (DFO) Aquatic Sciences biologist Dr. Luiz Mello with the Marine Fish Species At Risk section.

Sharks have adapted spectacularly to their environment. They are streamlined and cylindrical, like a torpedo with tapered edges, making it easy for them to cut through the water in pursuit of prey. A shark is cleverly camouflaged with their dorsal, or top side, darker when seen from above, to blend in with the blackness of the ocean. Their ventral, or underside, is lighter when seen from below and mimics the same shade as the surface of the ocean as it’s brightened by sunlight. 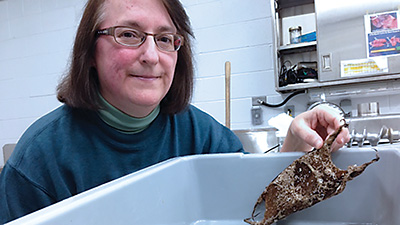 Carolyn Miri with a “mermaid’s purse” — a hard-shelled egg case with “horns” that surrounds a fertilized egg of skates and some shark species.

You’ll not find a bone in their body as they’re made up of cartilage and you will never find a shark without teeth. They have rows and rows of new incisor teeth waiting to replace the old ones as they fall out. It is estimated that over their lifetime, a shark may have 30,000 to 50,000 teeth.

Sharks are beautiful creatures and as graceful as a bird in flight. If you’ve ever wondered what a shark feels like, the biologists at DFO are hands-on and they’ll tell you.

“It’s like sandpaper, smooth down one way but if you go the other way, it’ll burn your skin,” says Carolyn Miri, a DFO marine biologist for over 28 years.

“Sharkskin scales are denticles and all that abrasive sandpaper is modified teeth. They’re actually not fish scales.”

Miri saw her first shark when she was six years old while camping with her parents on a Florida shore.

“I thought they were absolutely amazing animals. I’ve always been excited about sharks.”

With 500 species of sharks worldwide and 35 in Canadian waters, you can find everything from an angel shark to a zebra shark and there’s even a pool shark.

Miri says, “In our waters, there’s the basking shark. That’s the second largest fish in the world and we have it. They’re huge… six or seven metres up to 10 metres and they weigh tonnes. And they eat little tiny plankton.”

“Several species like the porbeagle, blue shark, basking shark and white sharks can travel thousands of kilometres along the Canadian and American coastlines.”

But while sharks may have been in our waters for years, Simpson recalls, “It was in the early 2000s when there was a need to do a species at risk assessment of the porbeagle shark that we realized we only had commercial catch information. There’s a lack of data on sharks in our waters in particular. So that’s where our research program comes in. Basically everything that we do related to sharks comes from that realization.”

Today, this DFO team is made up of biologists and technicians. They do the work of catching, measuring, weighing, identifying and tagging the sharks with either satellite, acoustic or regular fish tags. The data is then brought back to the lab at DFO’s Northwest Atlantic Fisheries Center in St. John’s, N.L., to study, report on and make recommendations and also educate the public.

If a dead shark is found in good shape on our shores and not too far away, the technicians will bring it back to the lab and confirm the shark species, take measurements, sample vertebrae to estimate its age and tissues for DNA analysis, and check the stomach contents to see what the shark was recently eating.

They have never found a human arm or a leg in the stomach contents of a shark, contrary to what the 1975 thriller movie Jaws might have made us believe.

“The greatest misconception about large sharks is that they are cold-blooded killers and vengeful,” says Miri, “and that they are stalking innocent bathers playing at the beach or people aboard their boats. On the contrary, sharks do not see humans as prey.”

From that year forward, the massive barbaric slaughter of all large sharks, not just White sharks, but all sharks along the Canadian and U.S. eastern seaboard has been perpetuated,” says Miri. “Even Peter Benchley, the author of Jaws, had regrets.”

In the 1980s, while scuba diving off Costa Rica, Benchley reported seeing a scene that would change his life. “There were corpses of finned sharks littering the bottom of the sea. It was the most horrifying sight I’d ever seen.”

“Knowing what I know now,” said Benchley in a London newspaper in 2002, “I could never write that book today because sharks don’t target human beings and they certainly don’t hold grudges.”

Sharks kill about four people a year worldwide. Cows kill more than five times that number of people with 22 deaths a year. Dog bites kill up to 40 people a year.

Mello says, “Look at the mosquito and malaria and how many they kill a year?” He’s right. The miniscule mosquito is the most deadly insect in the world killing about one million people every year. 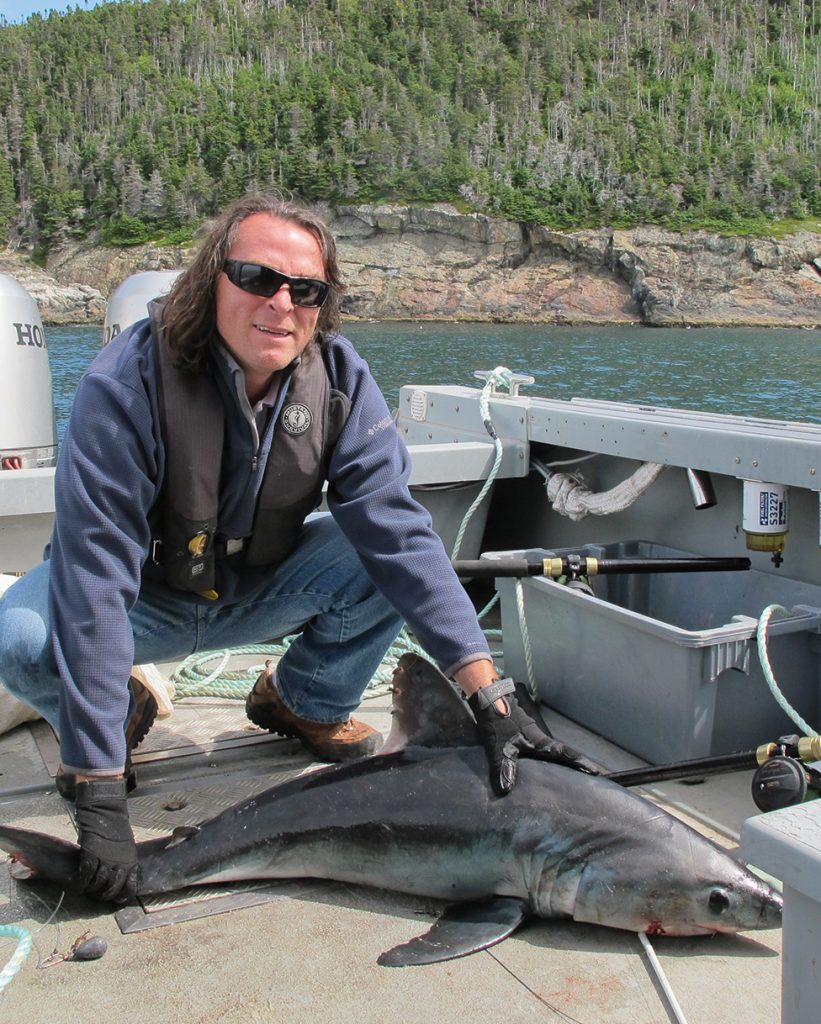 Dr. Luiz Mello in the field with a porbeagle shark.

You have about a one in 11.5-million chance of being attacked by a shark.

“Many species like Porbeagles, Blue sharks and White sharks are naturally curious, sometimes poking their snouts at floating buoys or at the hulls of small boats to see what they are about,” says Miri. “If a shark approaches a human, it’s because of its natural curiosity… or because it mistakes the person for something else, like a big fish or a seal.”

It is shameful to think that these prehistoric creatures of the sea, who have outlived dinosaurs and survived five major extinctions, now face their greatest challenge to survival — us.

What can we do? Stop littering. A plastic bag or bottle in the water could make a shark think that it’s food. The garbage gets eaten and the shark dies due to a blocked digestive system. If you are consuming shark products, make sure that they are from a sustainable fishery.

If you see a shark anywhere, even dead, on the shore or a beach, put on your citizen scientist hat and help DFO’s Marine Fish Species At Risk team.

“We’re asking people who might be out walking on the beach or enjoying a day on the water, if they see a shark anywhere around Newfoundland and Labrador we need this information, even if it’s just a cell phone photo. It gives us so much data!” says Miri. It’s even better if you can go into more detail and note the date, location, estimated length, and possible species, and take photos of its full body length and close-ups of its largest (first dorsal) top fin, head or mouth, teeth, and underbelly near its anus (male sharks have two finger-like claspers for internal fertilization of females).

The Marine Fish Species At Risk team reminds everyone out on the water to carry a thick pair of gloves and bolt-cutters aboard just in case. Porbeagles and blue sharks are opportunistic feeders and will happily snack on a plump cod being retrieved on a hand line.

Safety for everyone onboard is the number one priority. Never try to bring a shark onboard, always wear gloves when handling a shark and use bolt-cutters to either break the hook in its mouth or cut the line’s leader. The shark must be released where it was caught with the least possible harm, because it’s illegal to land any shark in N.L. recreational fisheries.

“Sharks are beautiful animals, and if you’re lucky enough to see lots of them, that means that you’re in a healthy ocean.” says National Geographic explorer-in-residence Sylvia Earle. “You should be afraid if you are in the ocean and don’t see sharks.”

The Dutchman in the Promised Land - Part II

No Replies to "Sharks are Making Waves - Part I"