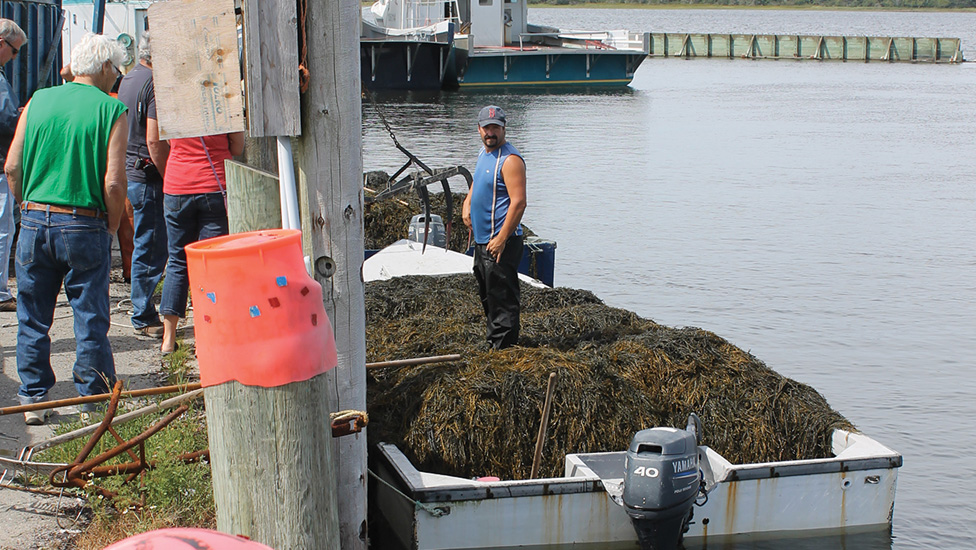 After eating a sumptuous lunch in Barrington Passage, in a place where lobster is pronounced “lobsteh,” my daughter and I decided to take the old shore route back to Yarmouth.

At Shag Harbour, I pointed out the spot where one of the world’s best documented UFO crash landings occurred a few decades ago. It was witnessed by a whole slew of people. Fishermen actually went to the spot with their fishing boats thinking the object might have been an aircraft. They were met with slimy waters and no debris. The “thing” eventually took off and disappeared, silently, into the heavens.

When we came to a sharp turn in the road at Charlesville, a piece of land jutting out at the mouth of Pubnico Harbour revealed a few swimming pool-sized ponds which were the brain child of a Deveau from Clare for growing seaweed.

The entire point was now covered by these ponds.

The company — Acadian Seaplants Ltd — has five sites — three in Nova Scotia and two in New Brunswick and is a world leader in the production of natural plants from shore-based establishments.

Employment was scarce in my neck of the woods when I was a teenager, so during the summer months, many took to the coastline to harvest Irish Moss. This was a back-breaking chore which could only be prosecuted when tides were at a certain level.

There was a knack to the endeavour, which I didn’t have. One trip stands out like a sore thumb. It involved an overnight stay on one of the islands off Wedgeport and Surette’s Island as we could rake four tides. I broke my borrowed rake on the first tide.

Natural powders are made from hand-harvested and wild-crafted North Atlantic ocean species such as Ascophyllum, Fucus and chondrus and other seaweeds, such as Hana Tsunomata, a sea vegetable produced in land-based cultivation system.

Their uses are many and should surprise some of you.

Hana Tsunomata is a line of premium quality, cultivated sea vegetables. It was originally developed for the Japanese culinary market, but is now available in North America.

These products are gluten free and suitable for vegetarian or vegan diets.

The company, based in Dartmouth, N.S., offers a variety of premium brown and red seaweeds. Each seaweed species grows in its own specific environment on the shoreline.

Primarily used in production of hydrocolloids such as alginate, agar and carrageenan, some are used as thickeners and gelling agents in such items as toothpaste, dyes, paints and medical growth medium.

Wild seaweeds are a sustainable and rapidly renewable resource.

In the brewing of beer for example, Irish Moss fining agents clear cloudiness in the brewing process. Carrageenan is the active constituent.

The raking of Irish Moss probably still exists in some coastal areas in Southwestern Nova Scotia, but rockweed-Ascophyllum — seems to have taken over as the major money maker for rakers.

Most wharves in this part of coastal Nova Scotia have portable containers on them. These are filled by the rakers and then whisked away to be dried by Acadian Seaplants.

I saw one guy from the Wedgeport area coming in with his skiff loaded to the gunnels with rockweed, in January.